The analogy of human memory with computer memory

Primary memory is the main memory of the computer. It is a memory that the processor or the computer access first or instantly. This works on the principle of the volatile mechanism. It is a bit confusing. People often consider cache memory as primary memory referring to Random Access Memory (RAM).

The system processor interacts with a program or application. Those opening in primary memory perform all application-specific functions. All the data is removed once the instruction is complete to the computer and shuts down.

There are several forms of primary memory:

RAM Computer Memory
RAM makes computers a bit faster and efficient in the work. As we all know, when we shut down, the data is removed. In technical explanation, RAM has two types:

SRAM is a memory that stores each bit using a bistable latch circuit. It makes it highly fast, hence the moniker cache memory. However, it is considerably more expensive than DRAM and takes up significantly more space, resulting in less capacity on a chip.

It’s also the most common type of cache in a CPU. It’s frequently labelled as L2 or L3. However, as previously said, because it is somewhat costly the values of L2 and L3 are normally limited to 1Megabytes to 16Megabytes.

DRAM is a different sort of RAM. It stores every bit of data in its own capacitors within an embedded system. This implies that each storage location on a DRAM chip is made up of a transistor and a capacitor. It holds one piece of data.

The memory controller must read the data and afterwards rewrite it in order to keep the data fresh. As a result of this process, DRAM is slower than SRAM.

DRAM, on the other hand, is less expensive than SRAM, hence it is utilized as the primary memory of a CPU. While slower than SRAM, it is still fast and can connect directly to the CPU bus.

ROM Computer Memory
ROM, like RAM, is an exact copy. However, unlike RAM, ROM can hold data indefinitely, making it non-volatile. It is a customizable chip that saves all of the critical instructions necessary to begin the system; this procedure is referred to as bootstrapping.

One of the first ROMs is MROM, which is a hand-wired gadget. It has a program mask that is burned onto the chip during the computer chip process’ design stage. Furthermore, it is the cheapest ROM among the others and it’s more compact per bit than in any of its kind.

PROM stands for “read-only memory” which means that the user can only change the information once. It is different from conventional ROM. It is an empty memory chip, whereas ROM is pre-programmed.

Because the chip has microscopic fuses that allow you to programme the PROM, a static electric charge can cause the fuse to blow out. As a result, it is more brittle than ROMs and is less expensive. To print the information, therefore, the user will need a PROM coder or PROM burners.

EROM is created using ordinary ROMs and PROMs. Despite their low cost, it could be inefficient because they cannot be re-written and reused. The data can be re-written by exposing it to ultra-violet radiation for up to 40 minutes.
You’ll need to subject the quartz clear window lid to ultra-violet light to wipe the data. You can reuse it when you’ve finished with it by simply sealing the lid with a label. You can, however, use an EPROM eraser as a substitute if you have one.

You’ll need to subject the quartz clear window lid to ultra-violet light to wipe the data. You can reuse it when you’ve finished with it by simply sealing the lid with a label. You can, however, use an EPROM eraser as a substitute if you have one.

EEPROM: Even though the erasing process is sluggish, EEPROM’s data can delete and re-program roughly 10,000 times. What’s more is that you can delete one byte of data, which gives you a lot of flexibility.

Secondary Memory is the external or axillary memory of the computer. Data processing speed is slow when compared to primary memory.

It is less important for the execution of the instruction. Its use is to have extra space to store data. People use this to store extra crucial data for a long period of time.

When the transistors in the NAND flash conducts electricity the SDD will be able to store information at a high rate as a result of this.

SATA, on the other hand, is a sort of link connection that allows SSDs to be capable of carrying information with the system. It may be used with almost any laptop or computer. Even if it is somewhat old, SATA 3.0 is the widest range of applications with a transfer rate of 6Gb/s. Although due to physical latency, the real transmission rate is usually 4.8Gb/s. Besides SATA 3.0, there is also SATA 2.0.

PCI-e or Peripheral Component Interconnect Express, commonly known as PCI Express, is a solid-state drive that uses the PCI-e link to connect to a computer system. It is able to embed flash straight on the server’s motherboard because it is attached to the backplane. This considerably enhances the transfer speed. When compared to the other SSDs, PCI-e is the quickest.

M.2 or NGFF (Next Generation Form Factor) contains flash storage and driver chips, which were previously known as M.2. This is similar to RAM in appearance, but it is significantly smaller and is a standard in netbooks and tablet PCs. M.2 also supports a wide range of protocols and applications. It includes Wi-Fi, USB, PCI Express, making it extremely adaptable. For desktops and laptops, the usual size of an M.2 SDD is 22 mm wide.

U.2 or the SFF-8639 interface is established by the SSD Form Factor Working Group. It was originally known as U.2 SSD (SFFWG). It’s similar to M.2, which sends data over a PCI-e interface. It is adaptable and compatible with SATA, SATA-E, PCI-e, and other interfaces. The essential differentiator between M.2 and U.2 is that the capacity is not limited to the compact circuit board (in M.2), allowing greater space for flash memory chips, resulting in higher capacity SSDs!

NVM-e is an acronym for Non-Volatile Memory Host Controllers Interface Specification (NVMHCIS). It connects to a PCI-e slot on the mainboard. They’re fantastic, but they come at a steep price and are only available on PCs.

HDD or Hard Disc Drive is a type of conventional storage device and magnetic storage device. It stores data on a magnetically optimal material. These gadgets usually offer big storage capacities and are also reasonably priced!

It is also very easy to read or write information. Their data reading speed is poor. They are used in RAM that has a high data accessing speed.

Flash Drive is one of the most common secondary storage devices. Flash drives are another name as thumb drives, pen drives, and USB drives. They’re essentially a little transportable storage device that makes it simple to save, rewrite, and delete data.

To retrieve the data on it, simply plug it into a USB slot on the motherboard. It may also be used with mobile phones or tablets. Nowadays, storage capacities range from 8Gigabytes to 64Gigabytes, but some even go up to 1TB!

Cache memory is nearest to Central Processing Unit. There is some data that the CPU frequently use. That data is stored temporarily. You may wonder why we need cache memory when we have RAM. This is because Cache Memory offers a faster speed of data access than primary memory.

Hence, Central Processing Unit first checks-in the cache memory. If it is not found, it checks the primary memory. So, it is the most important memory in the computer.

Cache memory in a computer is a priority for CPU.

The Growth in Computer Memory

Now it is clear that memory is very important for computation. The below table shows the same. 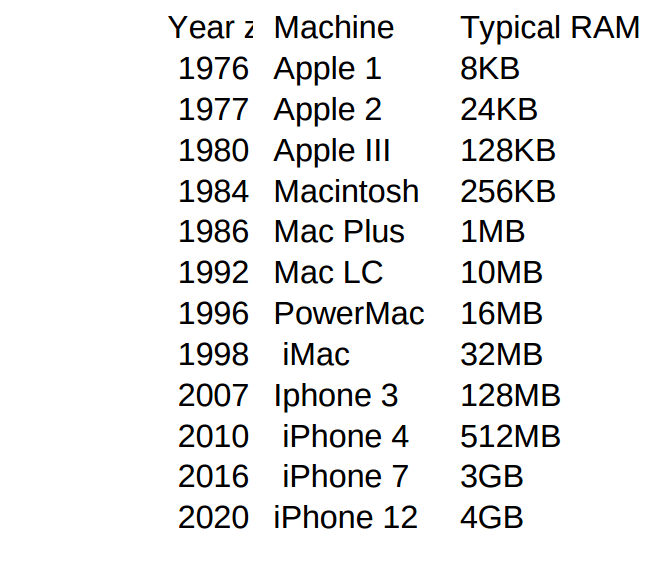 Nowadays cloud services like google cloud are present. It makes storage easy and accessible from any part of the world.