Why is Arduino Mega used

Arduino Mega comes with below mentioned features that makes it different from other Arduino Uno:

Specifications of the Arduino Mega 2560 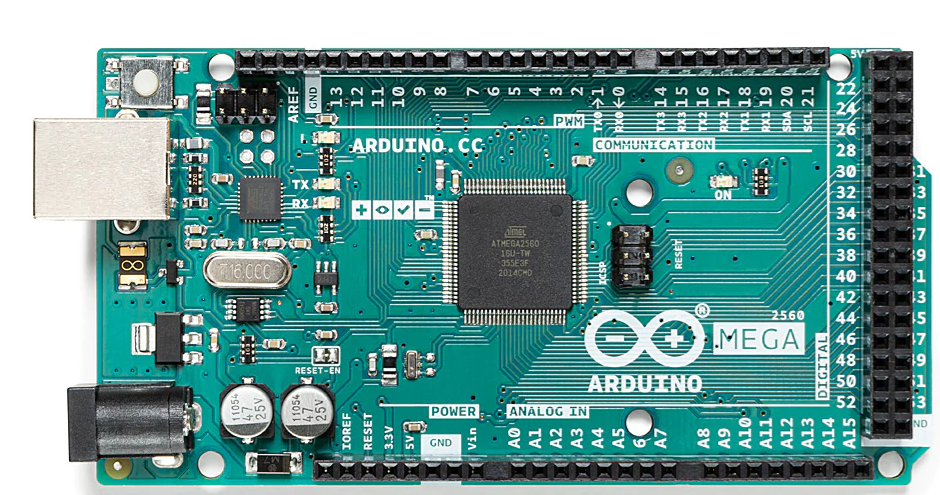 The Arduino mega2560 comes with 54 pins for digital inputs and outputs whereas 16 pins are for the analog input and outputs. To supply power to the peripherals connected with Arduino Mega 2560 there are a total 9 pins including the pins for providing the reference signal for analog and digital devices. For communication there are SCL, and SDA pins given, however we can use pins 21 and 20 for the SCL and SDA as well.

Digital pins of the Arduino Mega 2560

To connect the digital devices with the Arduino Mega 2560 there are 54 pins in which the 0 (RX0) and 1 (TX0) pins are for transmitting and receiving the data and are also called the communication pins. From the word digital you can suppose the data will be in 0 and 1 form. Similarly, to generate the input and output in the form of pluses you can use the pins from 2 to 13 of the board as they are dedicated pins of PWM and the duty cycle of the pulse is from 0 to 255 (0V-5V).

There are two dedicated pins next to the AREF pin that can be used for the data line and clock of the I2C devices. However, we can also use pins 20 and 21 as the SDA and SCL pins for the devices that used I2C and TWI (Two Wire Interface) communication protocols. The SDA pin is the data line for the connected device while SCL is the clock pin of the connected device. For the help of the user, we have given the image in which we have highlighted the respective pins. 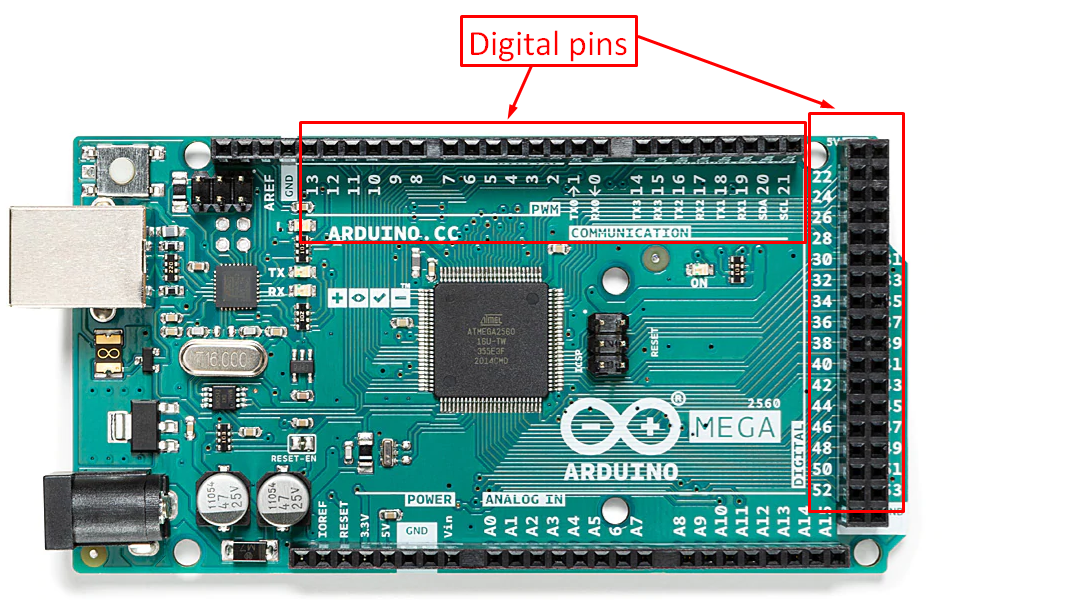 There are 16 analog pins provided in the Mega 2560 that can be used to connect the analog devices and have the resolution of 0 to 1024. This means that the values will be in between 0 and 1024 and in terms of voltage the 5 volts will be 1024. The figure attached below shows the analog pins of the Arduino Mega highlighted in red: 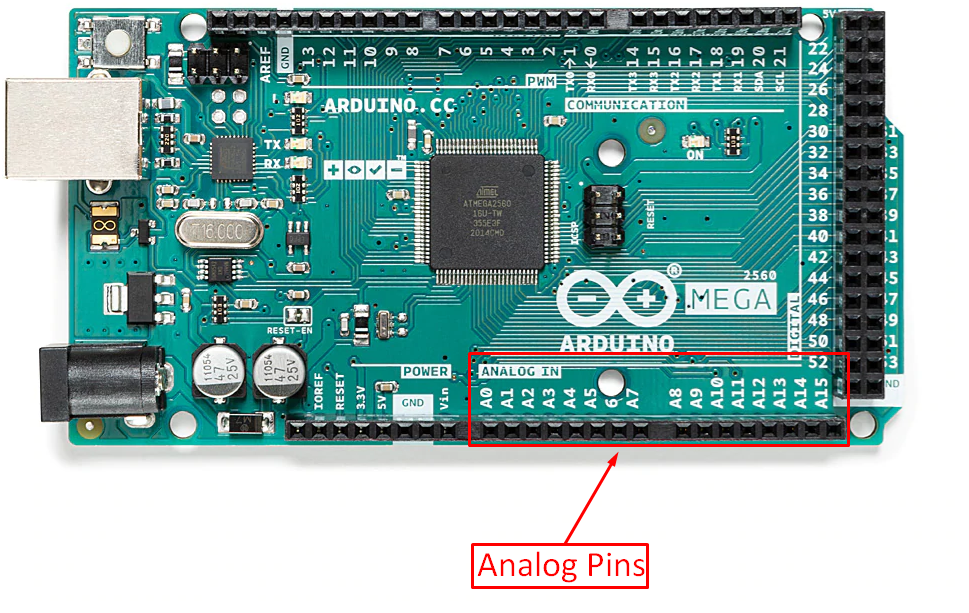 There are 10 pins provided to operate the devices connected with Arduino mega in which there are three pins for ground, one pin for 5 volts, one pin for 3.3 volts and two pins for giving the reference voltage for analog and digital devices.

There is a reset pin given in the board to RESET the Mega. However, there is also a dedicated RESET button provided on the board.

To connect the Arduino board with the supply voltage there is a USB port and a jack as well. You can use the USB port to power up the board and can also use it to upload the code to the Arduino. Whereas the jack provided for the supply is mostly used when the Arduino has to be functioned in standalone mode. The image below shows the power supply pins and the RESET button of the Arduino Mega. 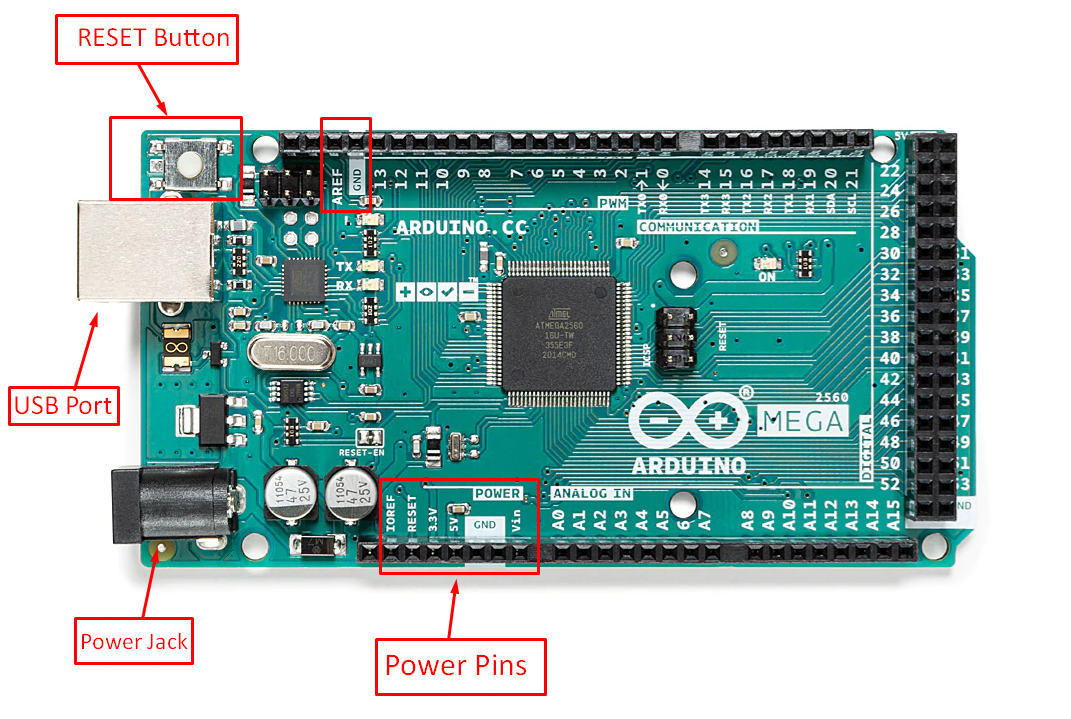 To update or change the firmware of the Arduino Mega 2560 we can use the 6 header pins given on the board. The in-circuit system programming (ICSP) can be done by connecting Arduino with the programming device with programming cord. We have encircled using square boxes the ICSP header pins of Arduino Uno in the image given below: 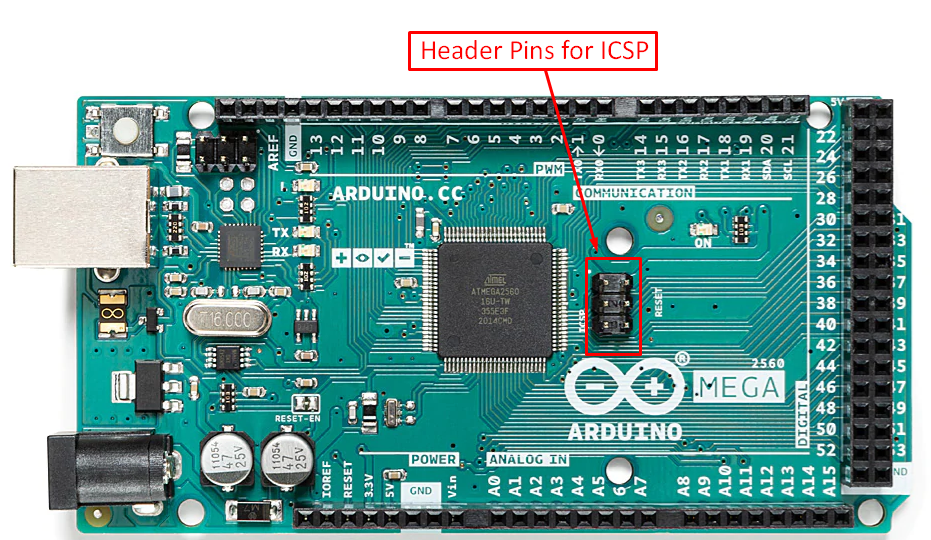 Arduino Mega 2560 is the one of the Arduino boards that has a large number of pins and has a powerful controller which makes it different from other boards provided by the Arduino platform. However, to use this board, one must be aware of the board specifications and also the pinout of the respective Arduino board so that the board can be used effectively. For ease of the learners, we have described the purpose of each pin of the Arduino in a very comprehensive way.