The IR (infrared) sensor is mostly used to detect the motion of the objects in the surroundings as well as the detection of the presence of the objects. We can interface the IR sensor with the Raspberry Pi 4 in different projects and in this write-up we have discussed the method by which it can be interfaced with Raspberry Pi 4.

What is the infrared (IR) sensor and how does it work

The IR sensor is an electronic module which contains the transmitter and the receiver, the transmitter emits the infrared radiation which hits the obstacles and is reflected back by that obstacle which is detected by the receiver of the module and it changes the output to High.

This sensor has three terminals, one is Vcc connected to the 5 volts, the other is the Ground which is connected to the ground terminal, and the last one is of output, through which we can find out the output of the IR sensor. 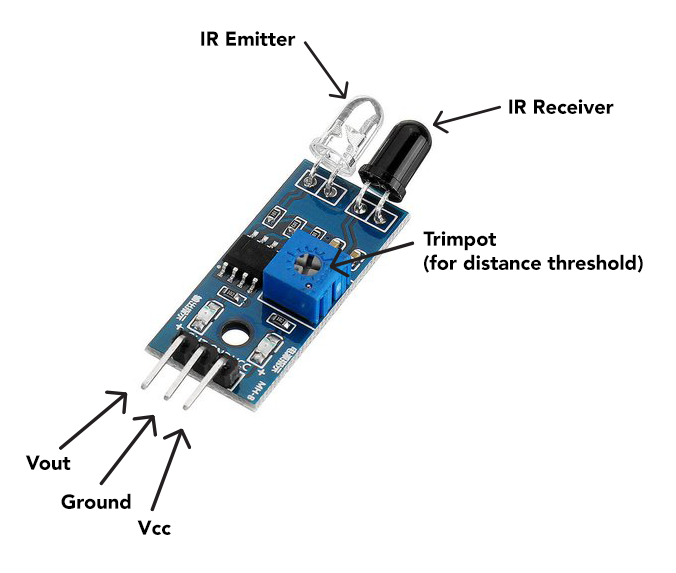 To understand the working of the IR sensor, we will configure a simple circuit to find out the presence of the object in front of the IR sensor. For this purpose, we need the following electronic components:

The circuit diagram of the circuit to detect the presence of the object is: 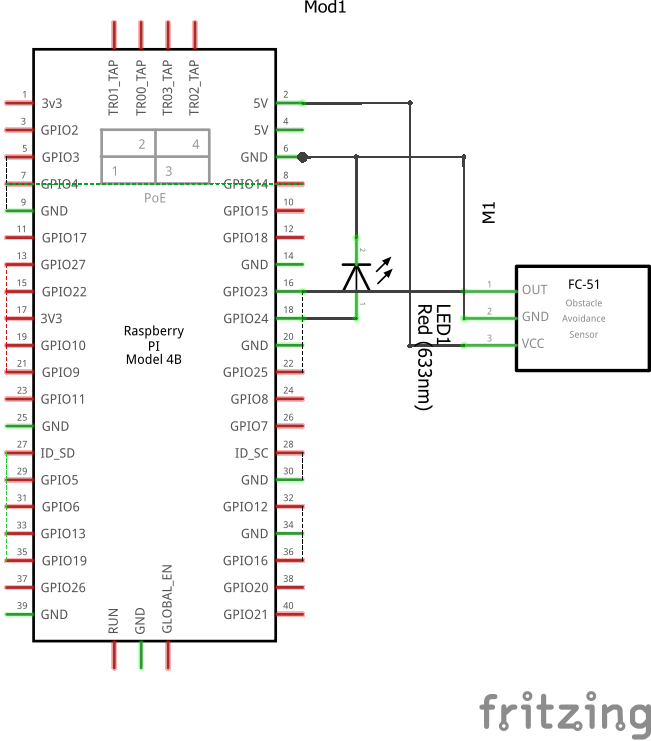 For making the circuit following the above circuit diagram, first we will place the Raspberry Pi 4, IR sensor, and a LED on the breadboard: 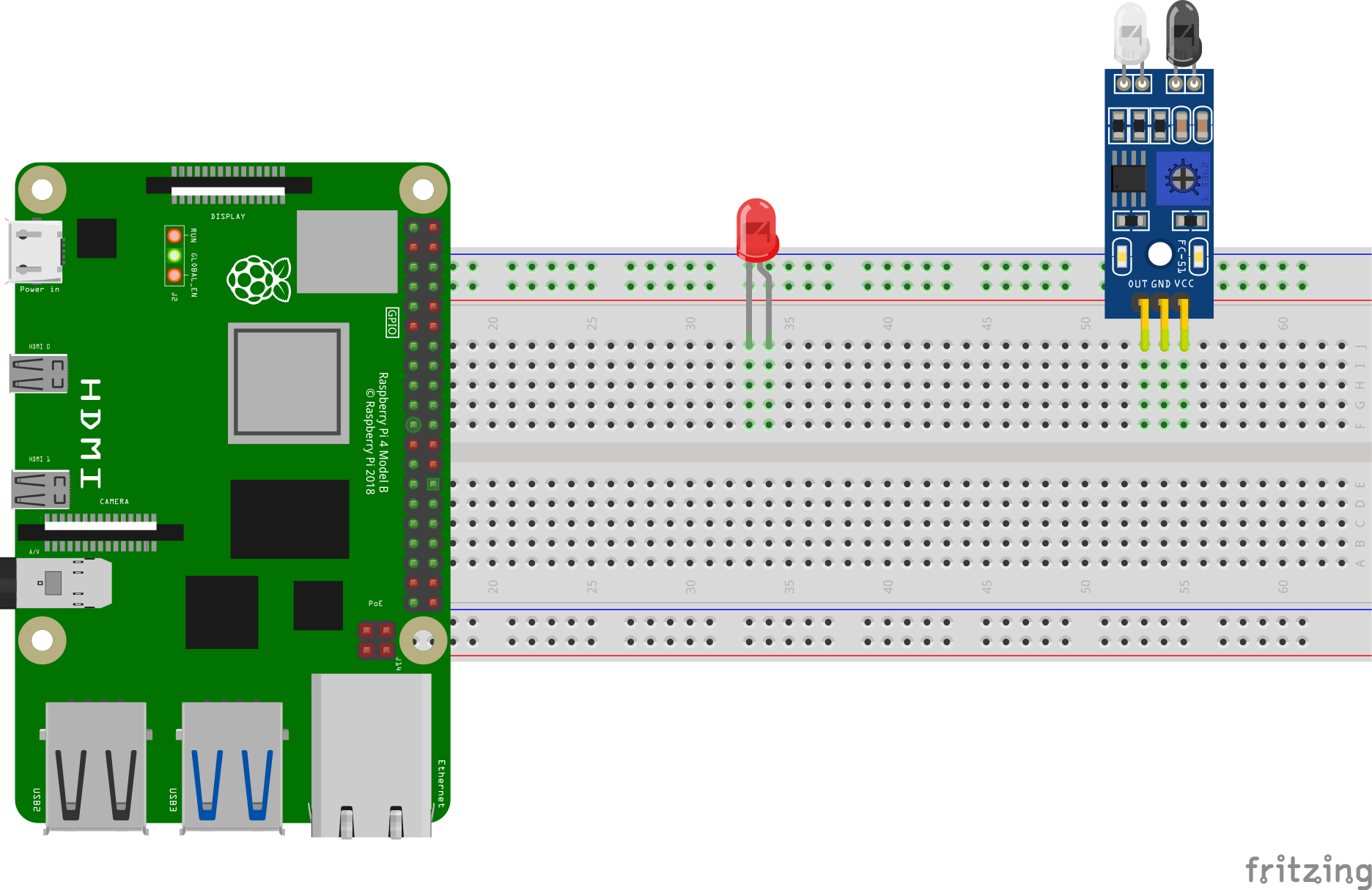 Now will will connect the IR sensor and the LED with the Raspberry Pi according to the table: 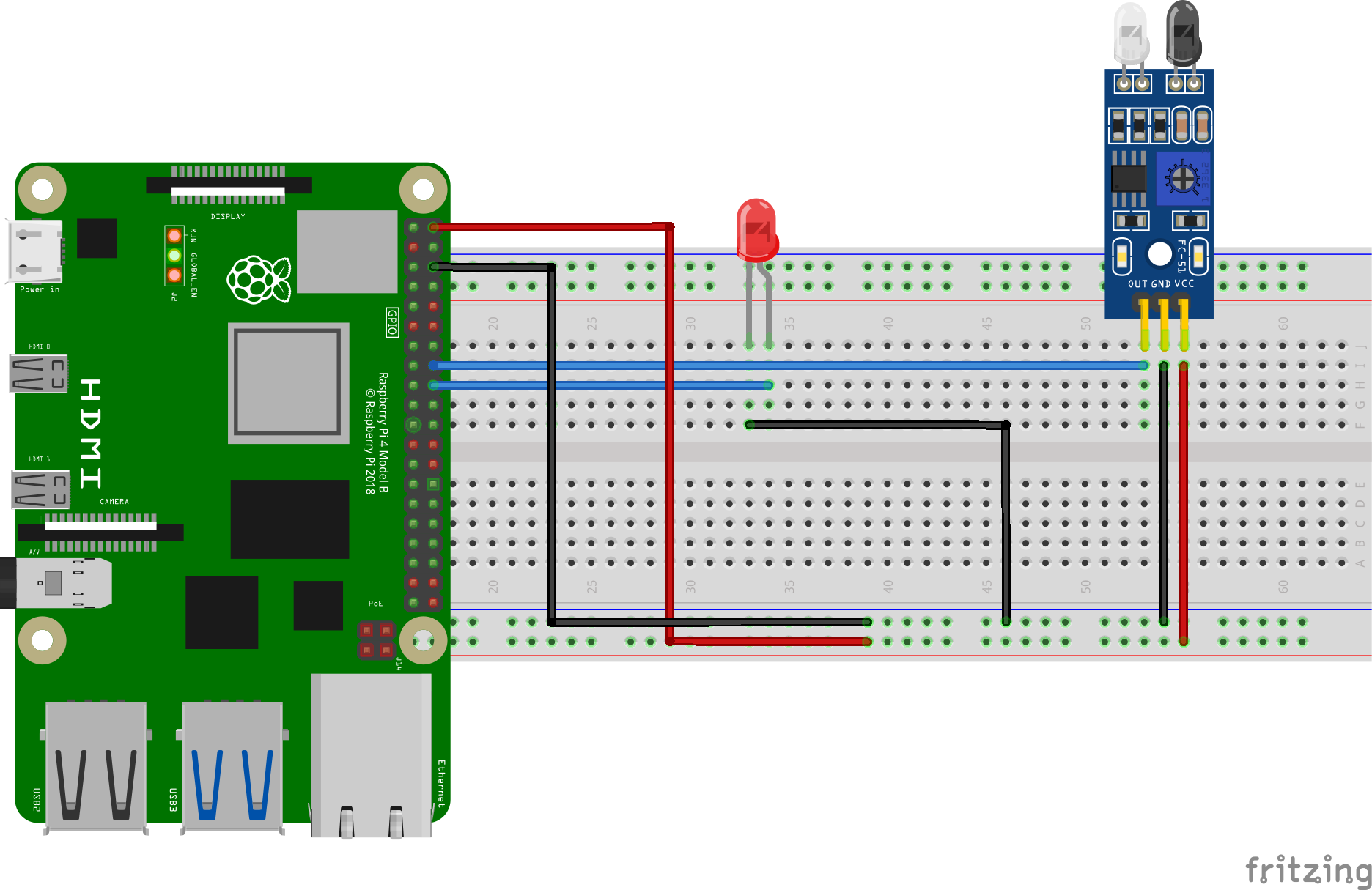 To detect the object using the IR sensor with the Raspberry Pi, we have to write a Python script for this purpose, we will open the text file with the name of “ir_sensor.py” using a nano text editor:

Now, we will type the following Python code:

#importing the library of RPi.GPIO

#importing the library of time

#declaring BCM pin 16 which is GPIO 23 of Raspberry Pi

#declaring BCM pin 18 which is GPIO 24 of Raspberry Pi

#declaring the BCM mode of pins

#set the behaviour of sensor as input

#set the behaviour of led as output

#initiated a infinite while loop

#led turned off if there is no input on sensor

#if any key is pressed on keyboard terminate the program

#cleanup the GPIO pins for any other program use

Explanation of code: We have imported the time and RPi.GPIO library and then declared pin 16 for the sensor and pin 18 for the LED. These pin numbers are according to the board pin numbers for which we set the setmode to GPIO.BOARD and declared the sensor pin as input and the led pin as output.

To compile and run the ir_sensor.py file, we will use the command:

The hardware working of the project is: 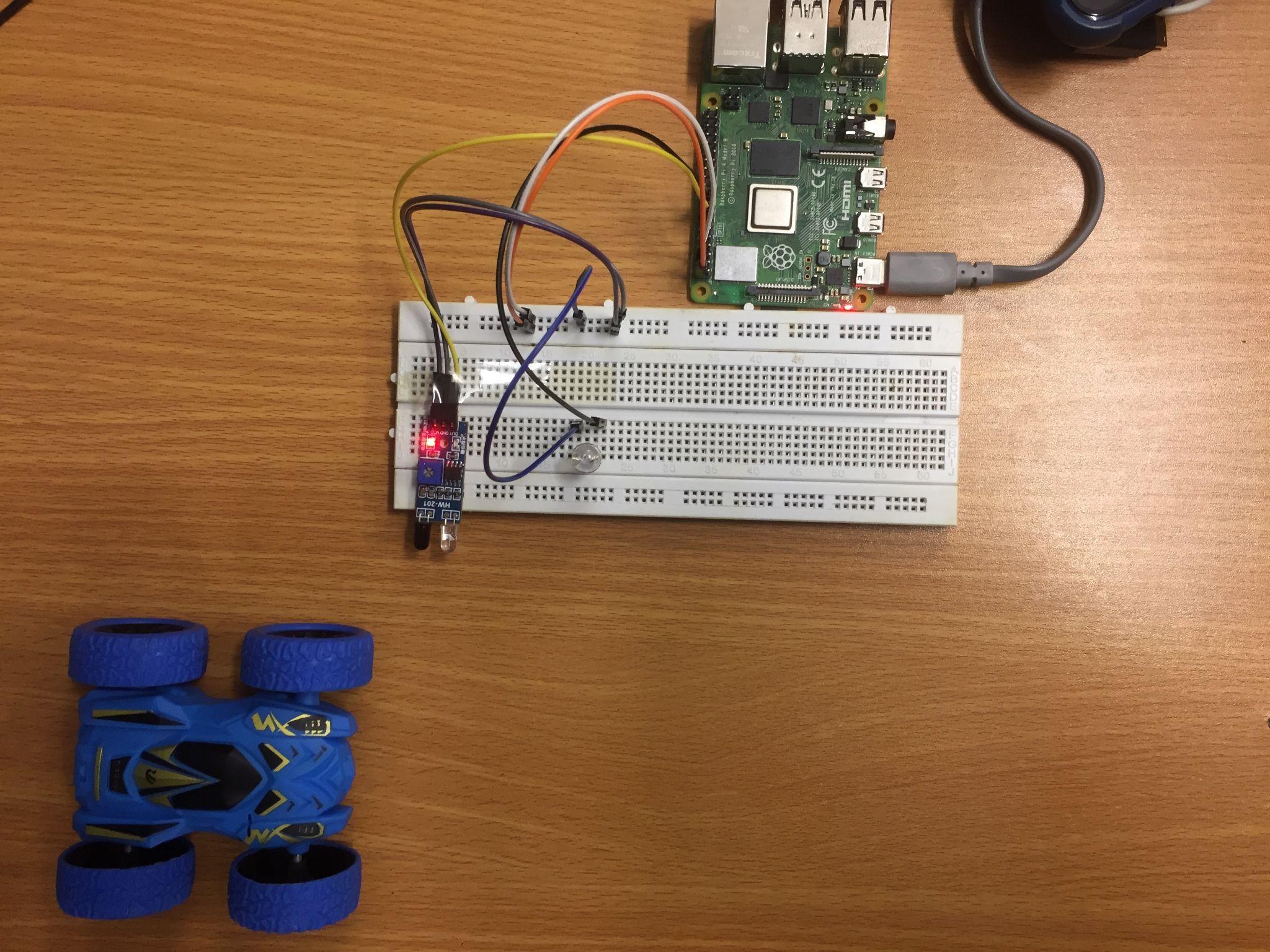 LED is off and the object is not in front of the sensor: 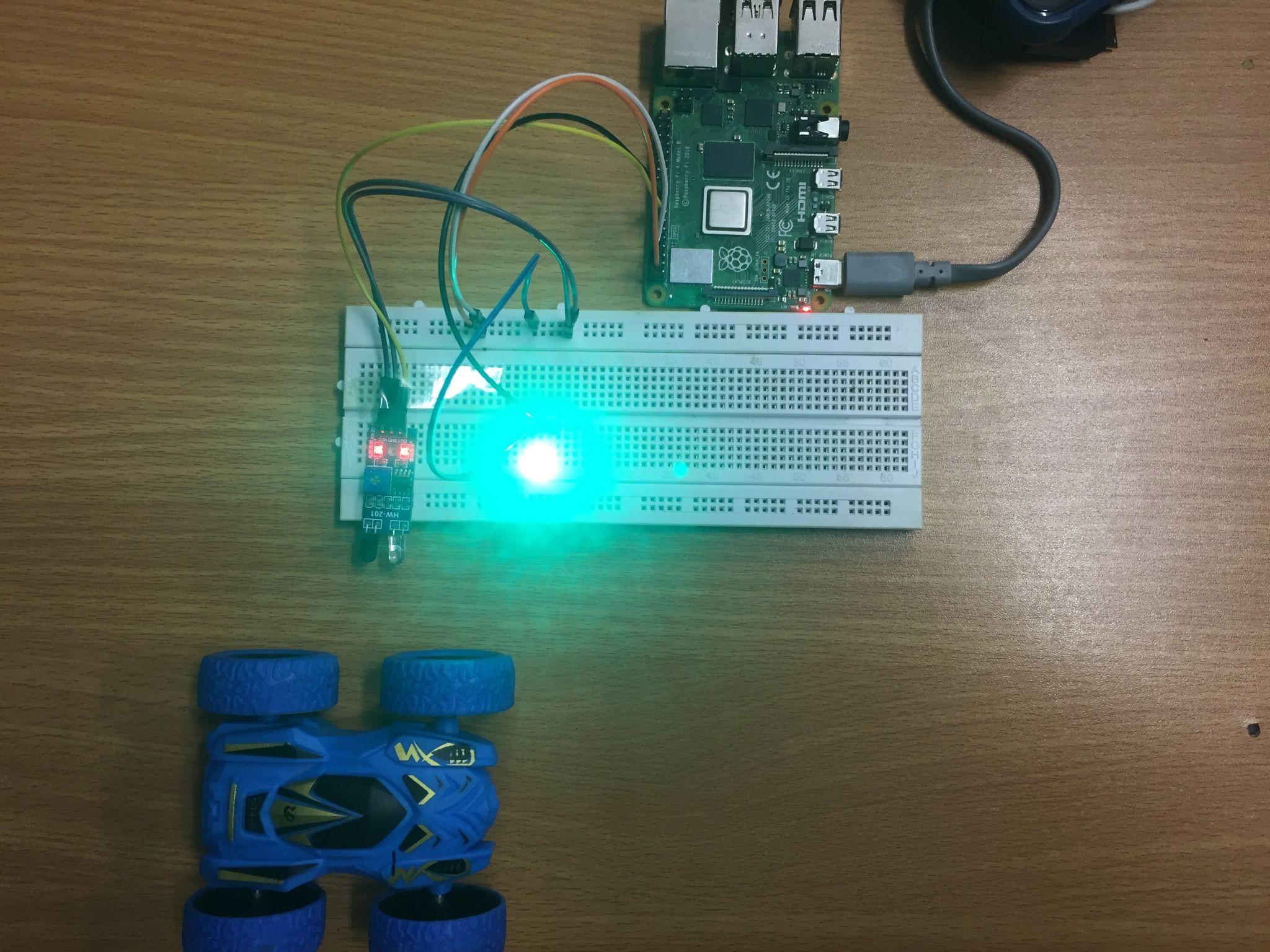 The LED will glow as the object is crossing the IR sensor.

The transmitter of the IR sensor transmits the infrared rays continuously, when the object comes in front of these rays, the rays reflect back due to the obstacle. The rays are detected by the receiver of the IR module and it makes the output of the IR sensor high. In this write-up, we have interfaced the IR module with the Raspberry Pi 4 and understand the working of an IR module by making a simple object detection project.