Wireshark is a network packet analyzer. It captures every packet getting in or out of a network interface and shows them in a nicely formatted text. It is used by Network Engineers all over the world.

Wireshark is cross platform and it is available for Linux, Windows and Mac OS. You get the same user experience in any operating system you use.

To learn more about Wireshark, visit the official website of Wireshark at https://www.wireshark.org

In this article, I will show you how to install Wireshark on Ubuntu and how to use it. I am using Ubuntu 18.04 LTS for the demonstration. But it should work on any LTS version of Ubuntu still supported at the time of this writing. Let’s get started.

Wireshark is available in the official package repository of Ubuntu 14.04 LTS and later. So it is really easy to install.

Now, Run the following command to install Wireshark on your Ubuntu machine:

By default, Wireshark must be started as root (can also be done with sudo) privileges in order to work. If you want to run Wireshark without root privileges or without sudo, then select <Yes> and press <Enter>. 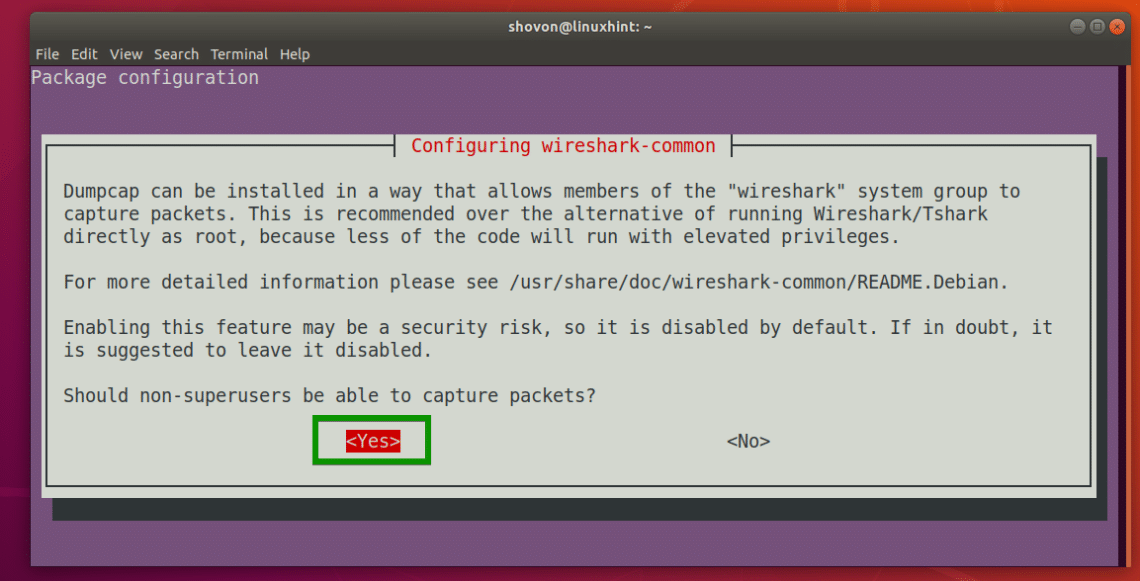 Wireshark should be installed.

Now if you selected <Yes> in the earlier section to run Wireshark without root access, then run the following command to add your user to the wireshark group:

Finally, reboot your computer with the following command:

Now that Wireshark is installed, you can start Wireshark from the Application Menu of Ubuntu. 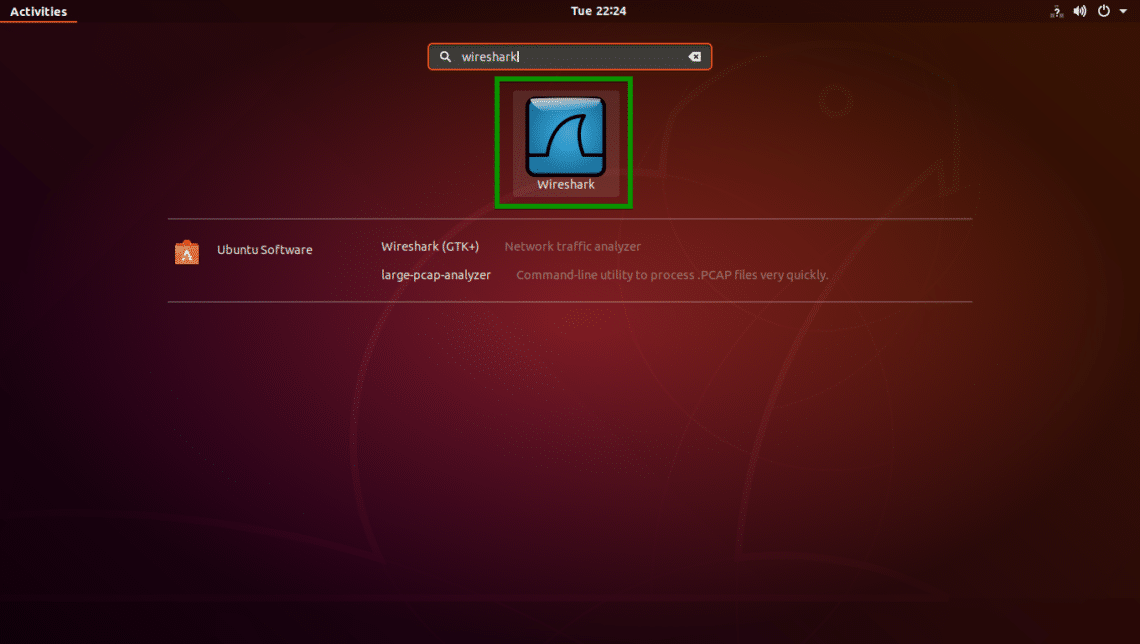 You can also run the following command to start Wireshark from the Terminal:

If you did not enable Wireshark to run without root privileges or sudo, then the command should be: 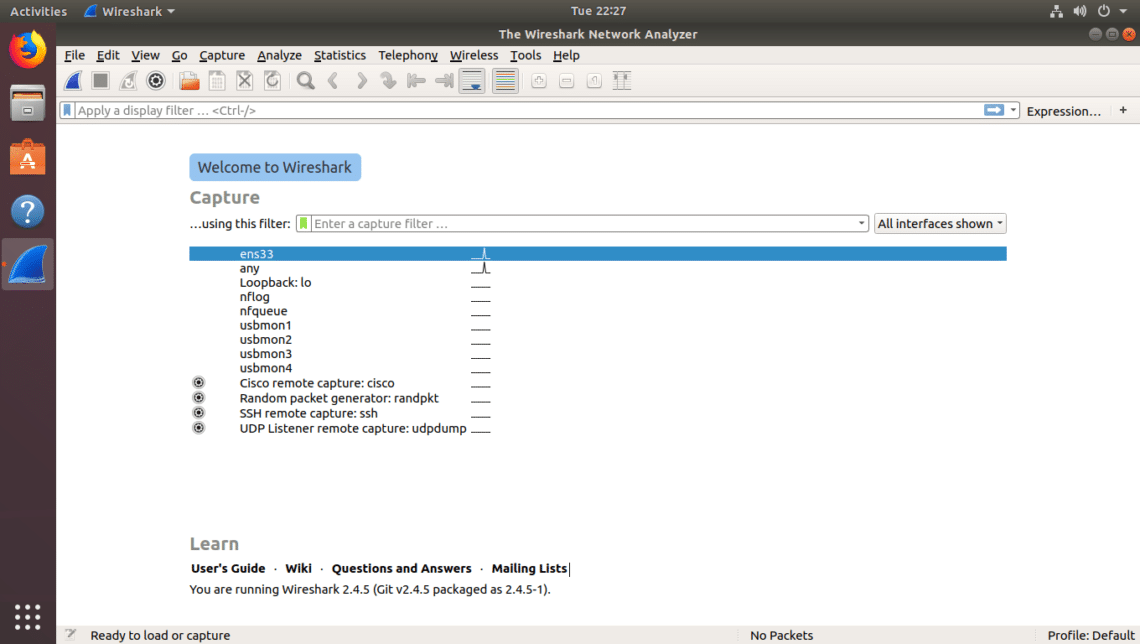 When you start Wireshark, you will see a list of interfaces that you can capture packets to and from. 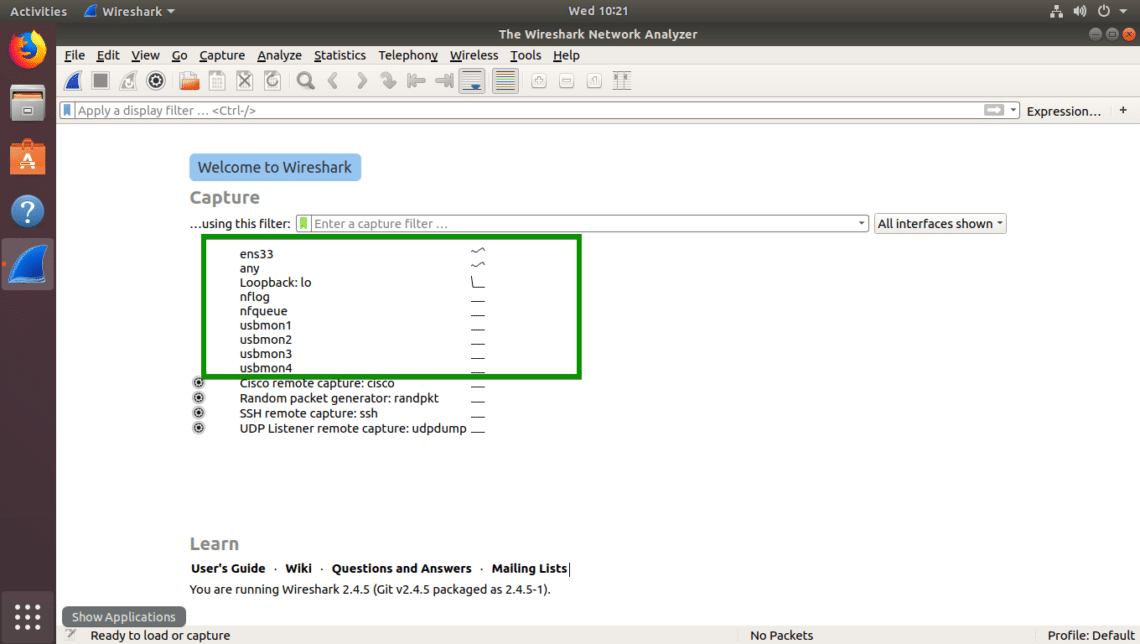 There are many types of interfaces you can monitor using Wireshark, for example, Wired, Wireless, USB and many external devices. You can choose to show specific types of interfaces in the welcome screen from the marked section of the screenshot below. 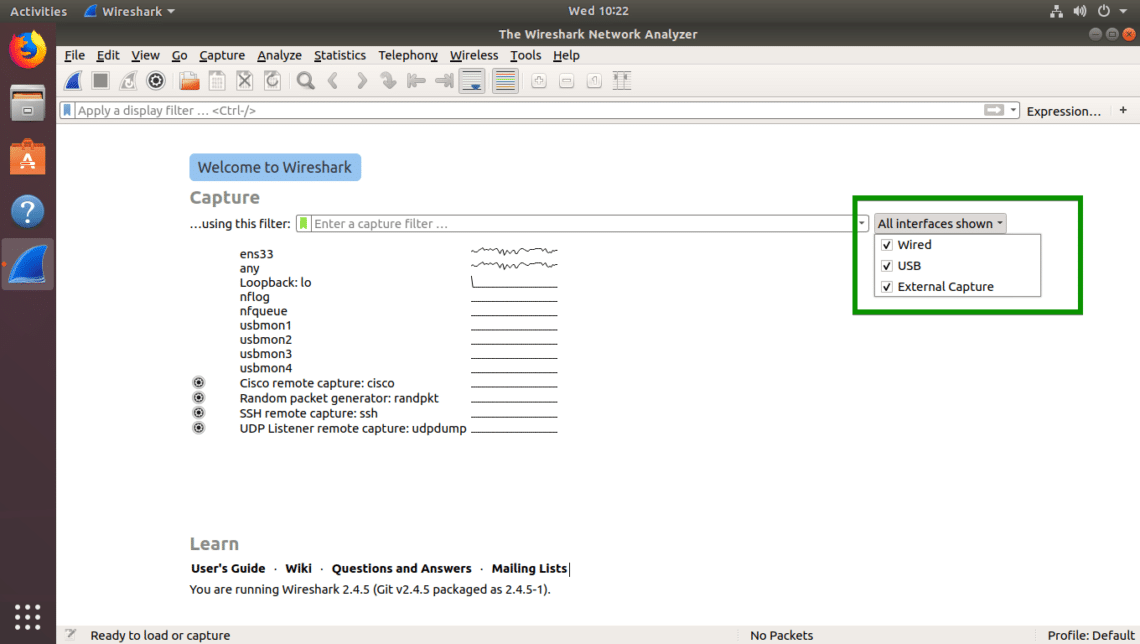 Here, I listed only the Wired network interfaces. 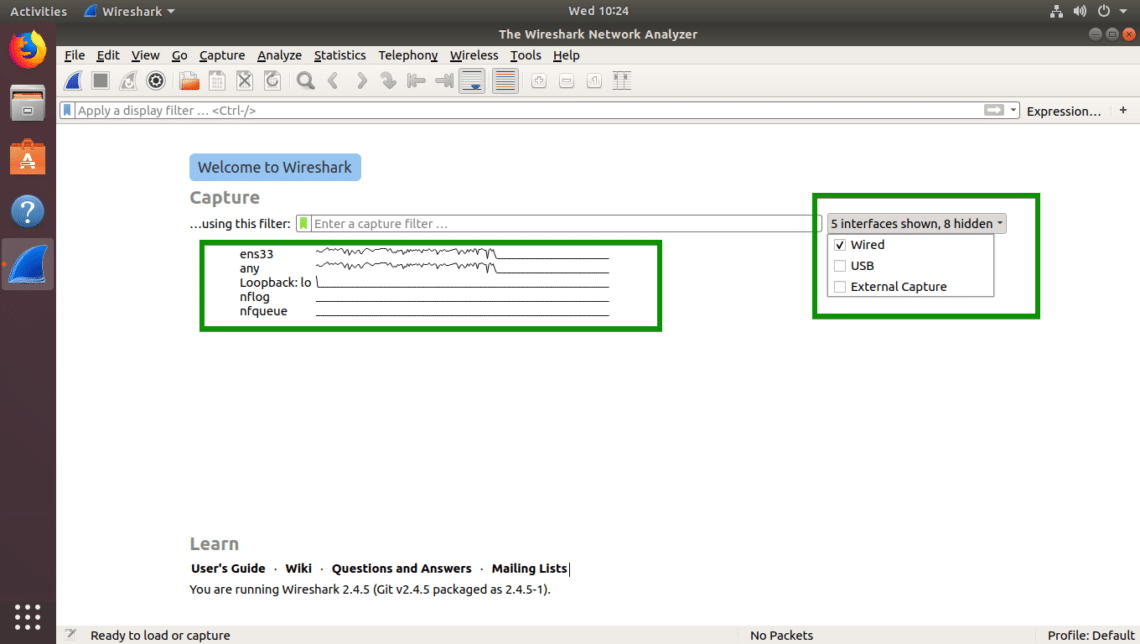 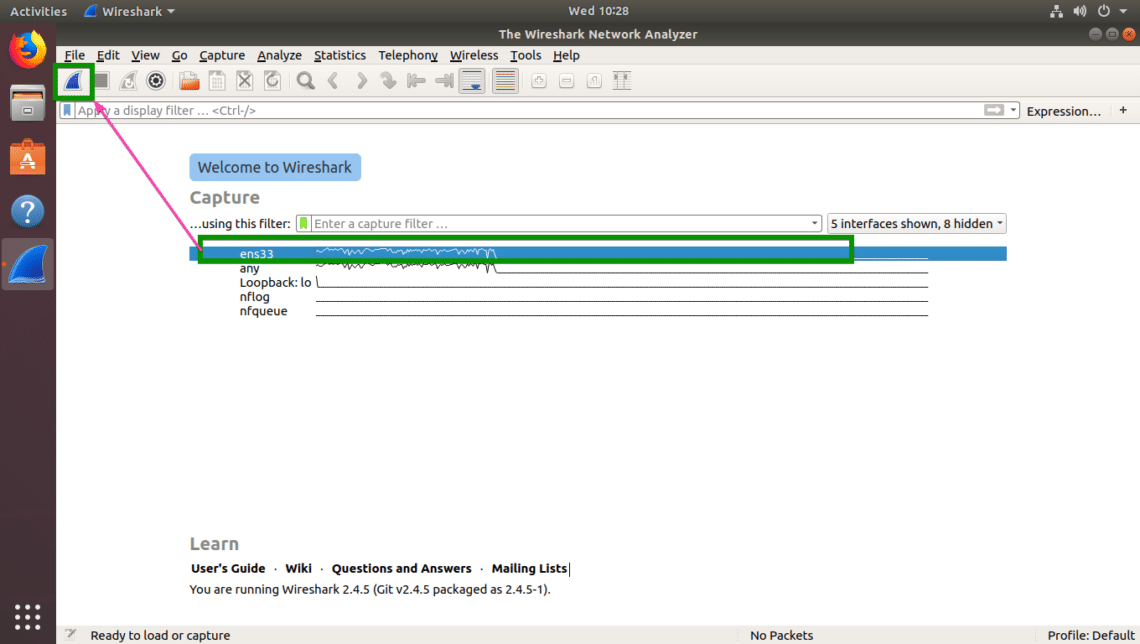 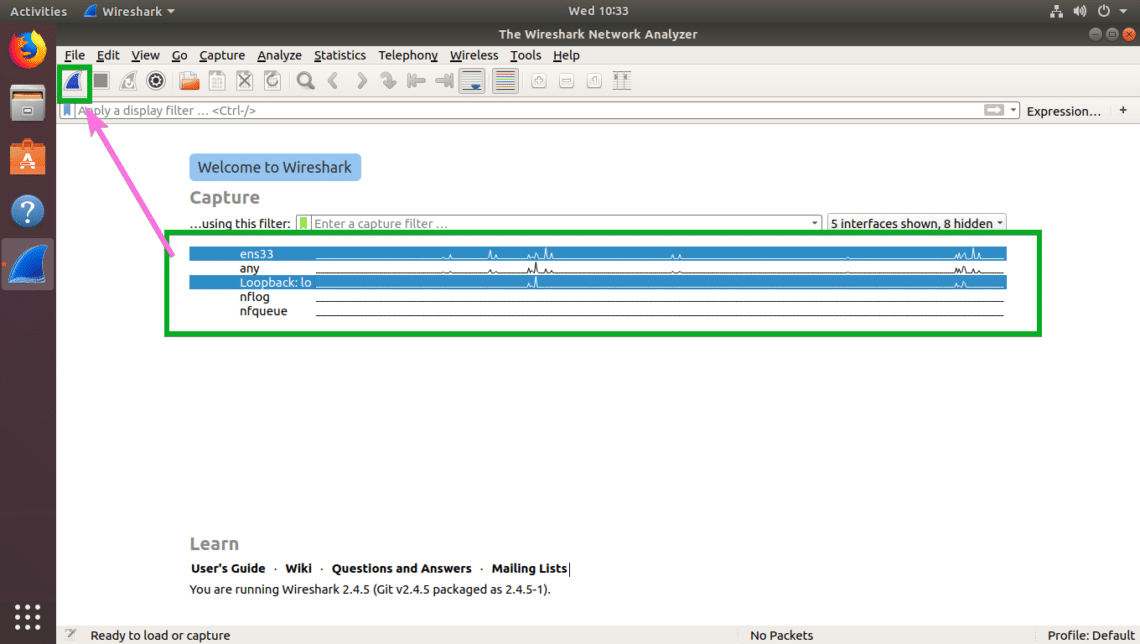 I am capturing packets on the ens33 wired network interface as you can see in the screenshot below. Right now, I have no captured packets. 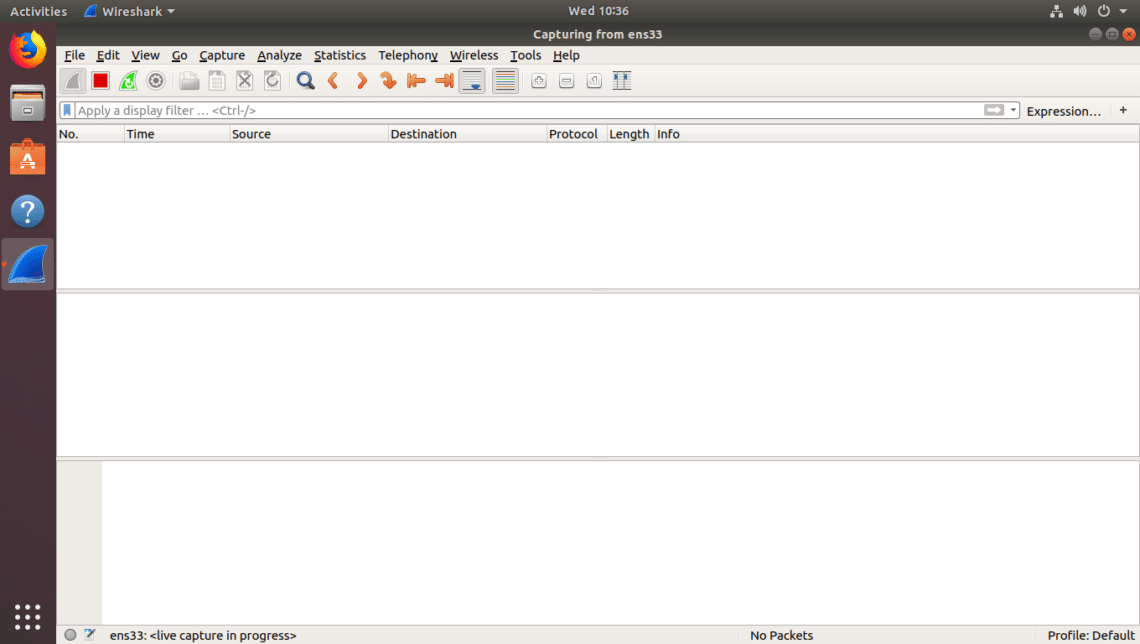 I pinged google.com from the terminal and as you can see, many packets were captured. 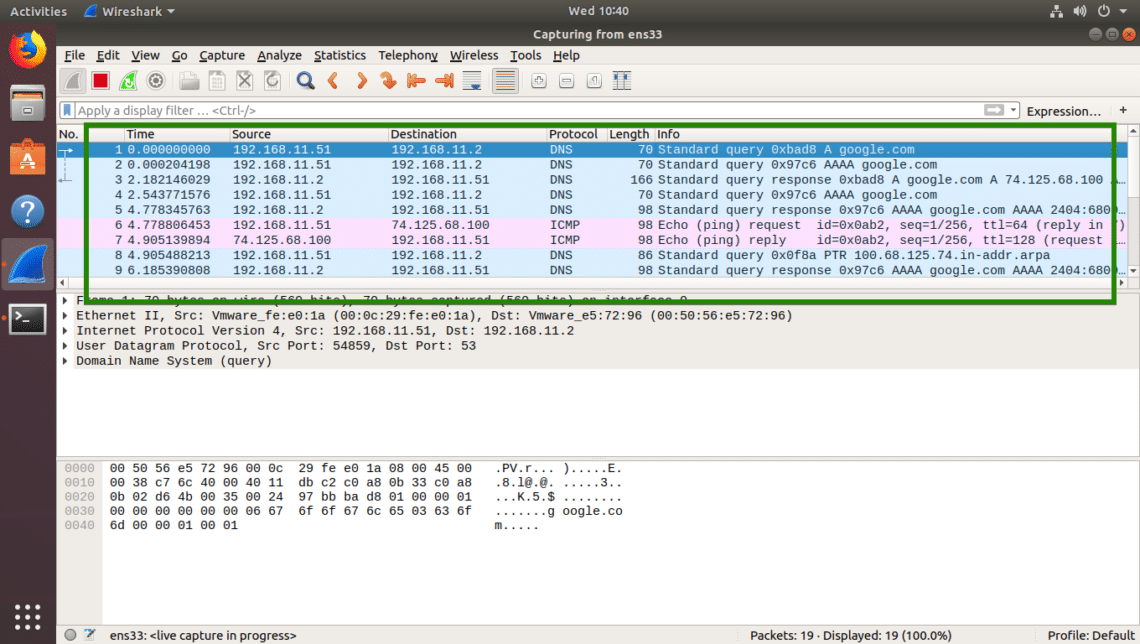 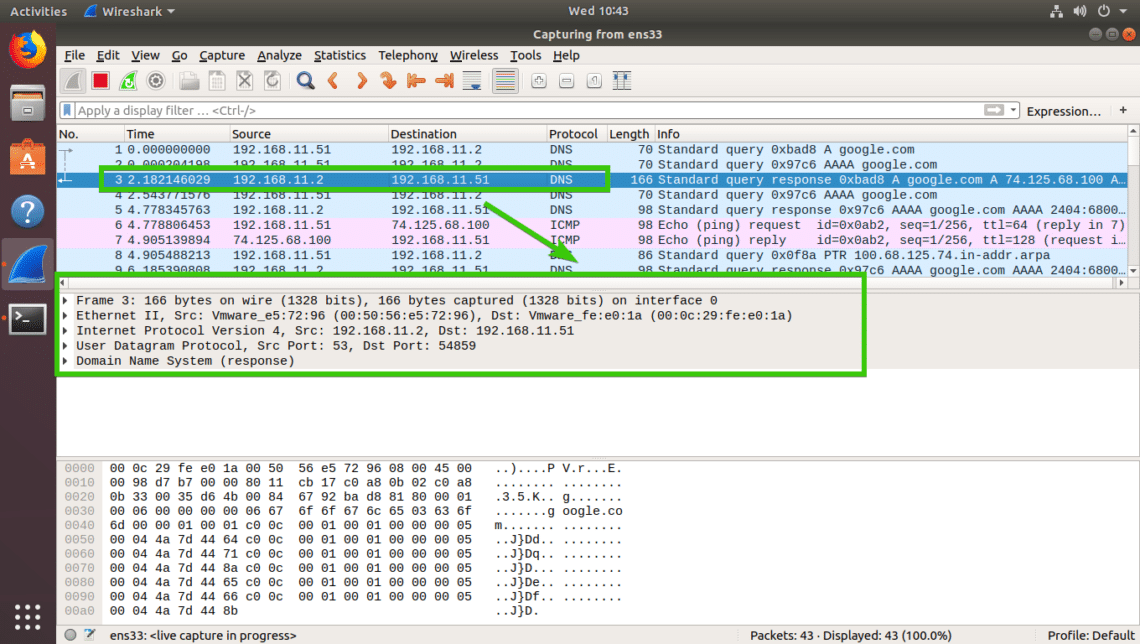 You can also see the RAW data of that particular packet. 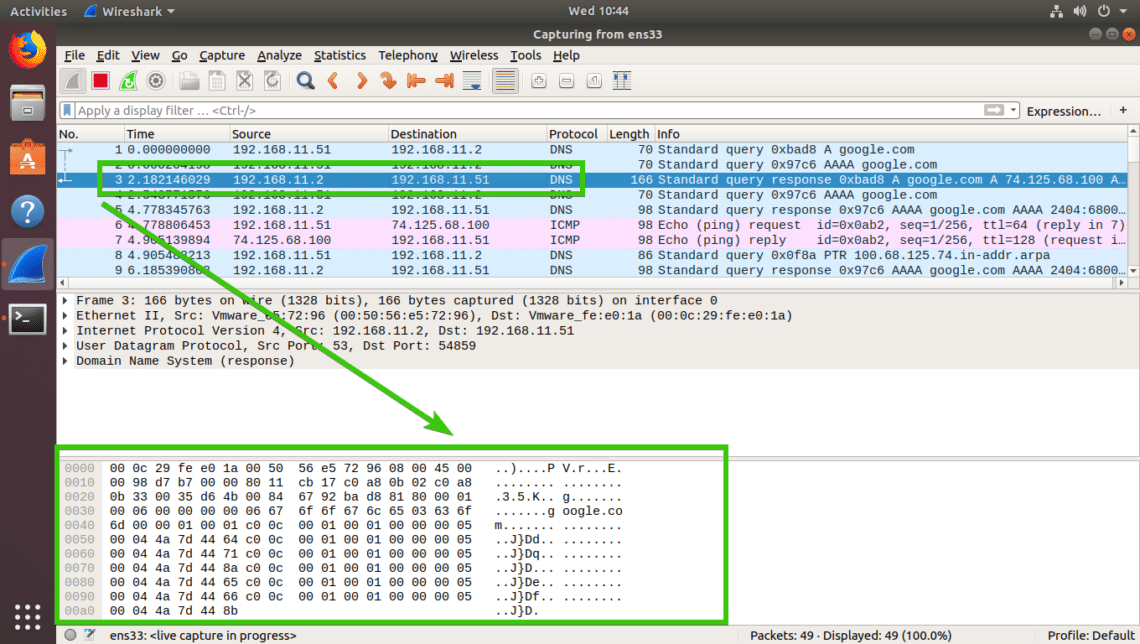 You can also click on the arrows to expand packet data for a particular TCP/IP Protocol Layer. 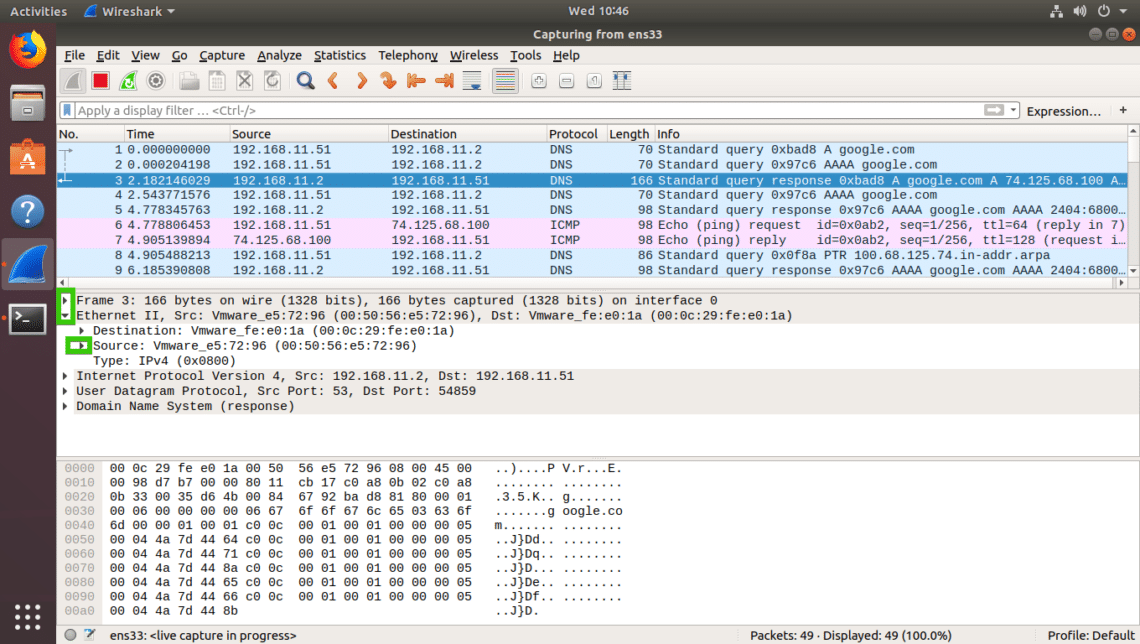 On a busy network thousands or millions of packets will be captured each second. So the list will be so long that it will be nearly impossible to scroll through the list and search for certain type of packet.

The good thing is, in Wireshark, you can filter the packets and see only the packets that you need.

To filter packets, you can directly type in the filter expression in the textbox as marked in the screenshot below. 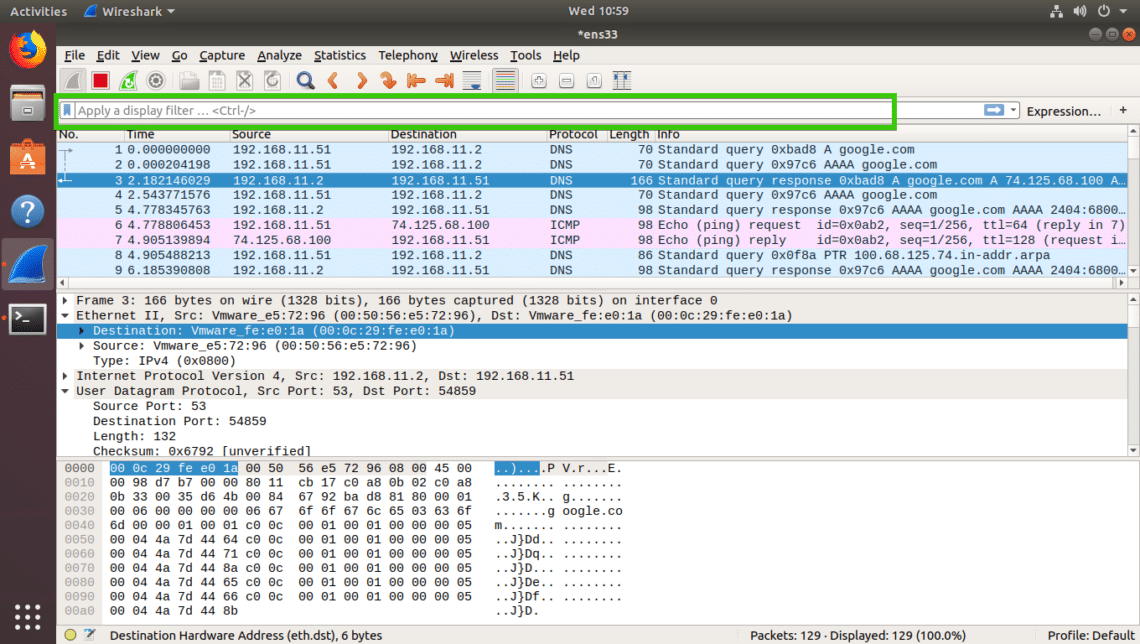 You can also filter packets captured by Wireshark graphically. To do that, click on the Expression… button as marked in the screenshot below. 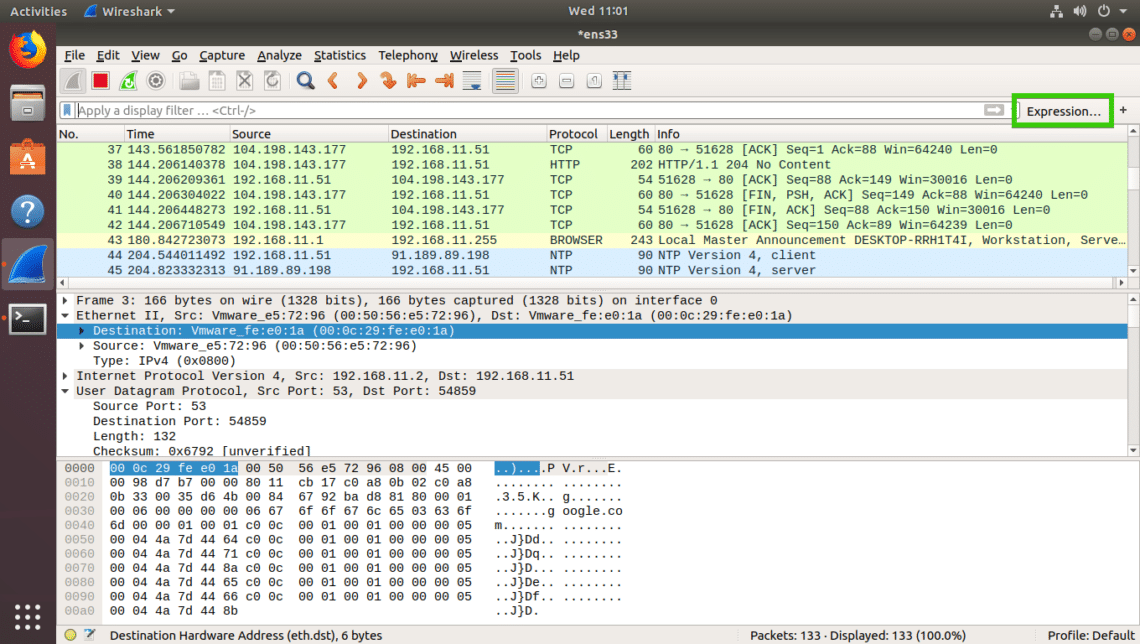 A new window should open as shown in the screenshot below. From here you can create filter expression to search packets very specifically. 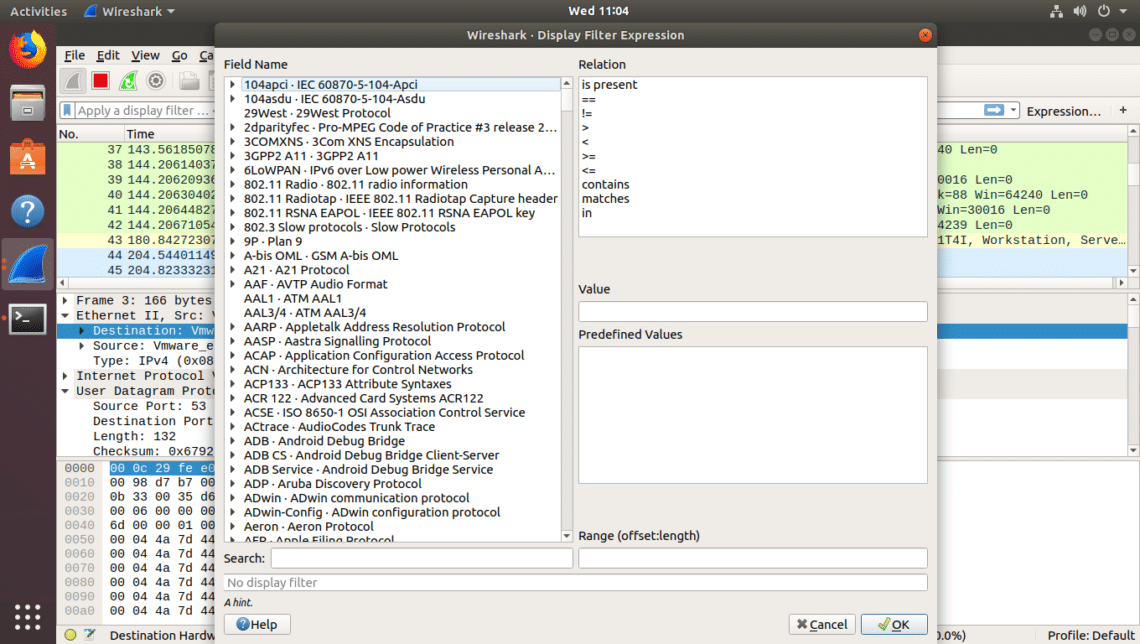 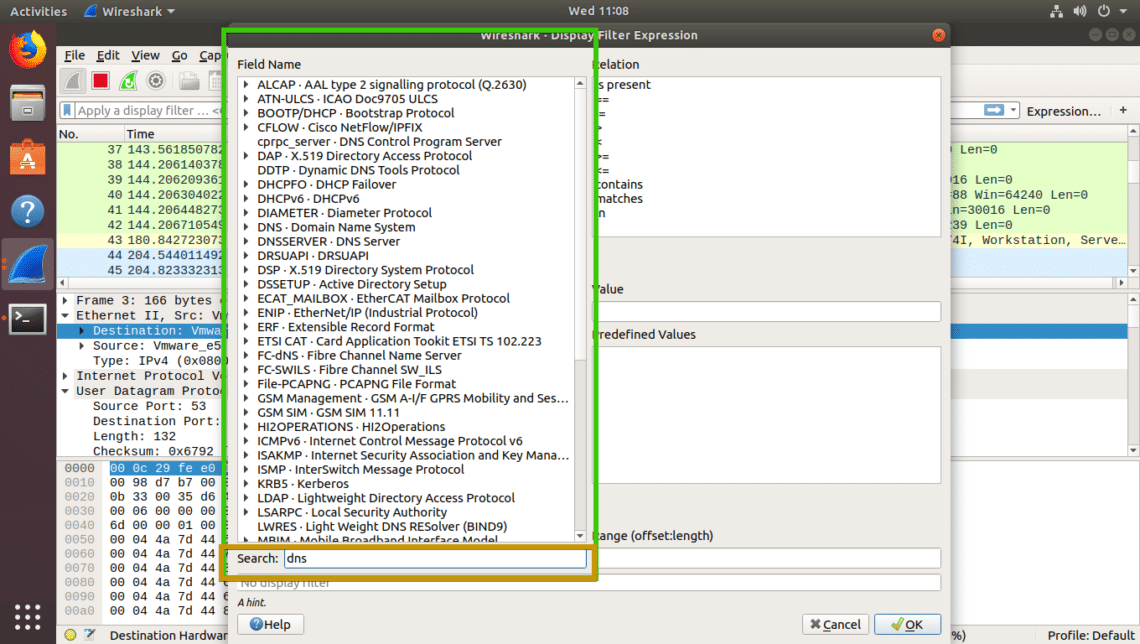 In this article, I am going to filter out all the DNS packets. So I selected DNS Domain Name System from the Field Name list. You can also click on the arrow on any protocol 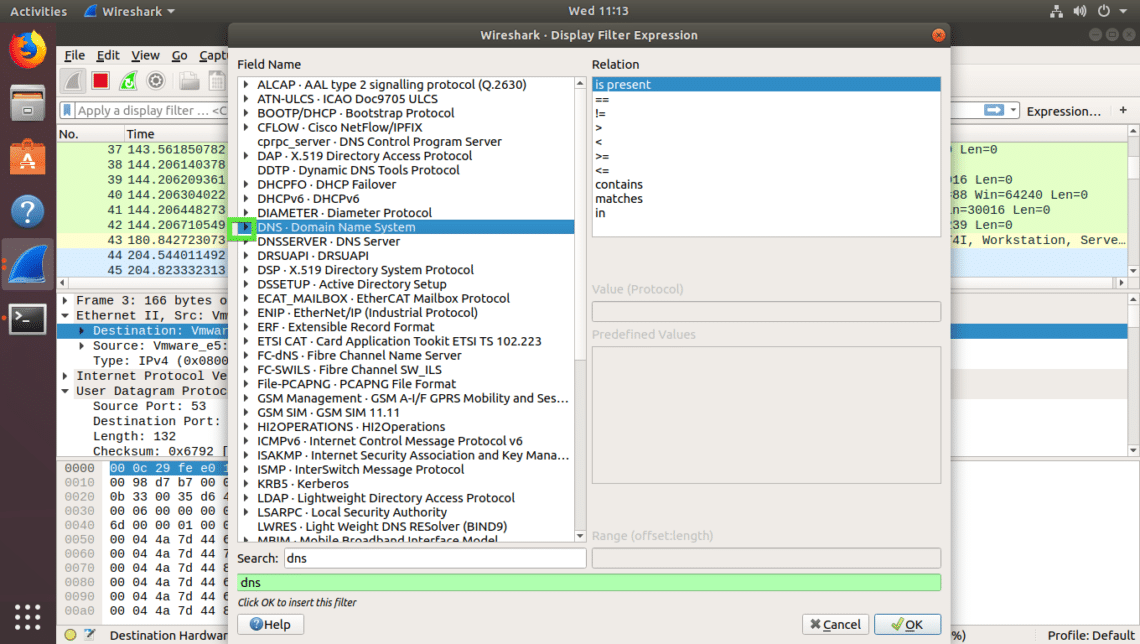 And make your selection more specific. 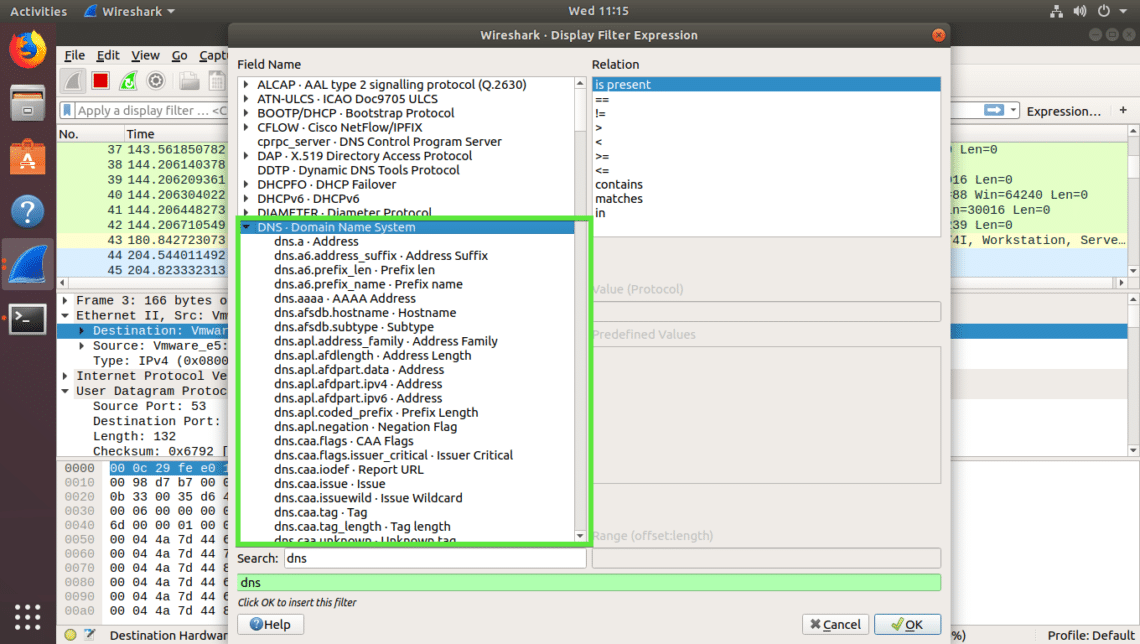 You can also use relational operators to test whether some field is equal to, not equal to, great than or less than some value. I searched for all the DNS IPv4 address which is equal to 192.168.2.1 as you can see in the screenshot below. 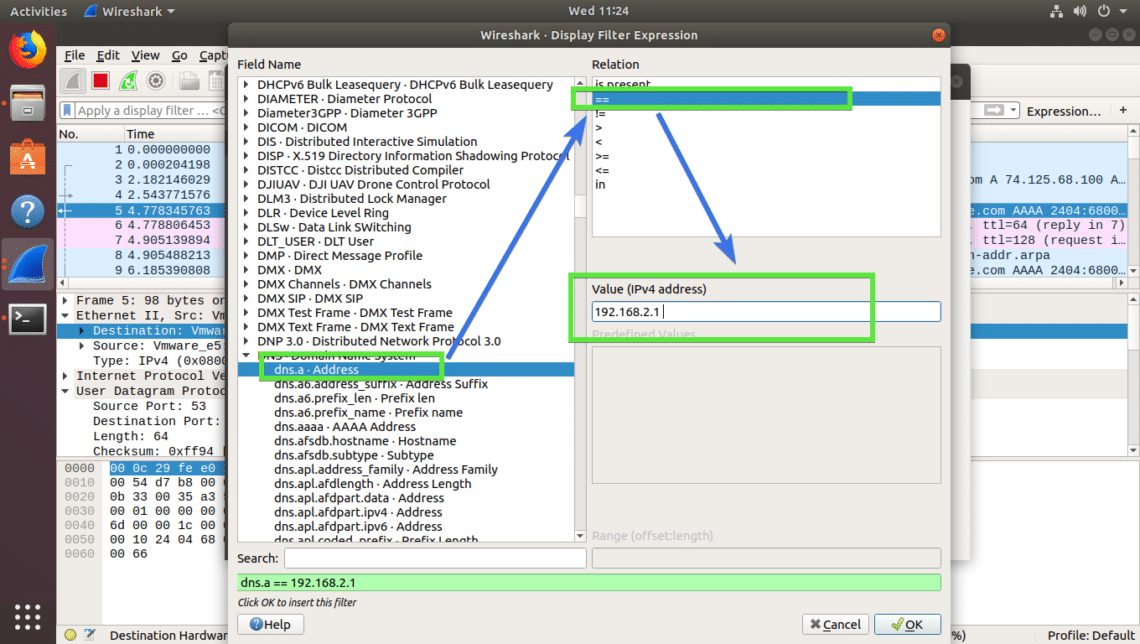 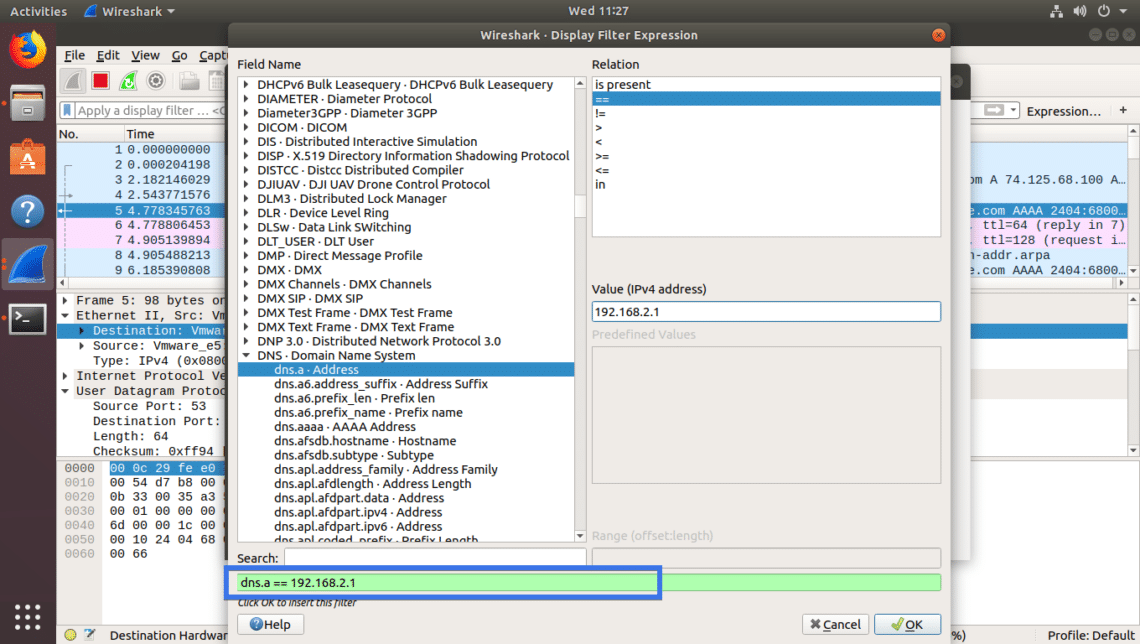 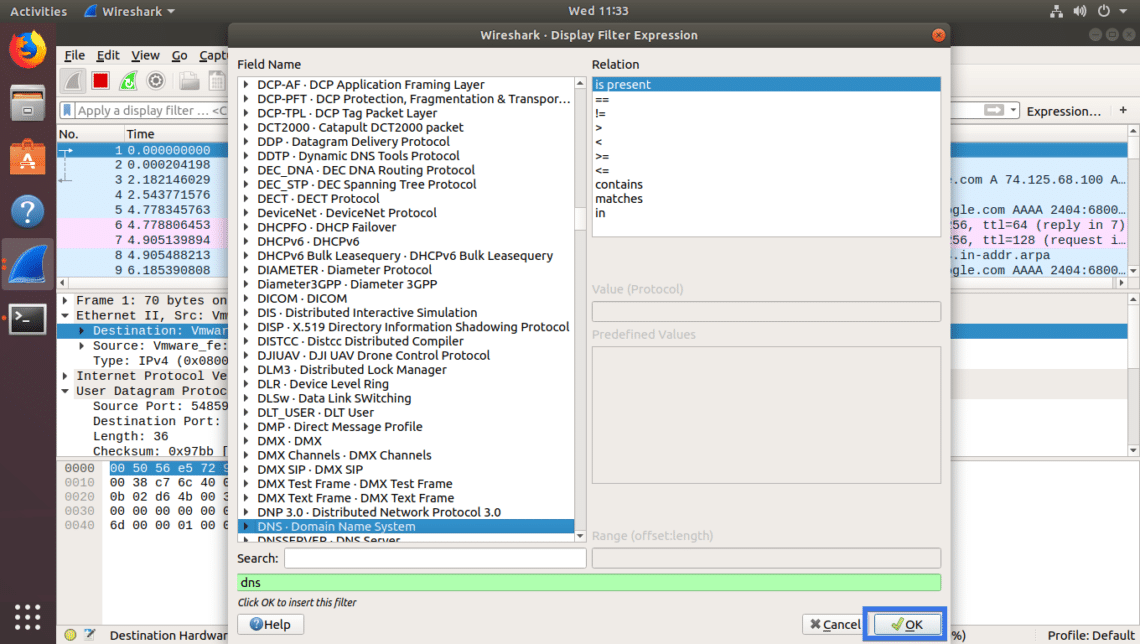 Now click on the marked icon to Apply the filter. 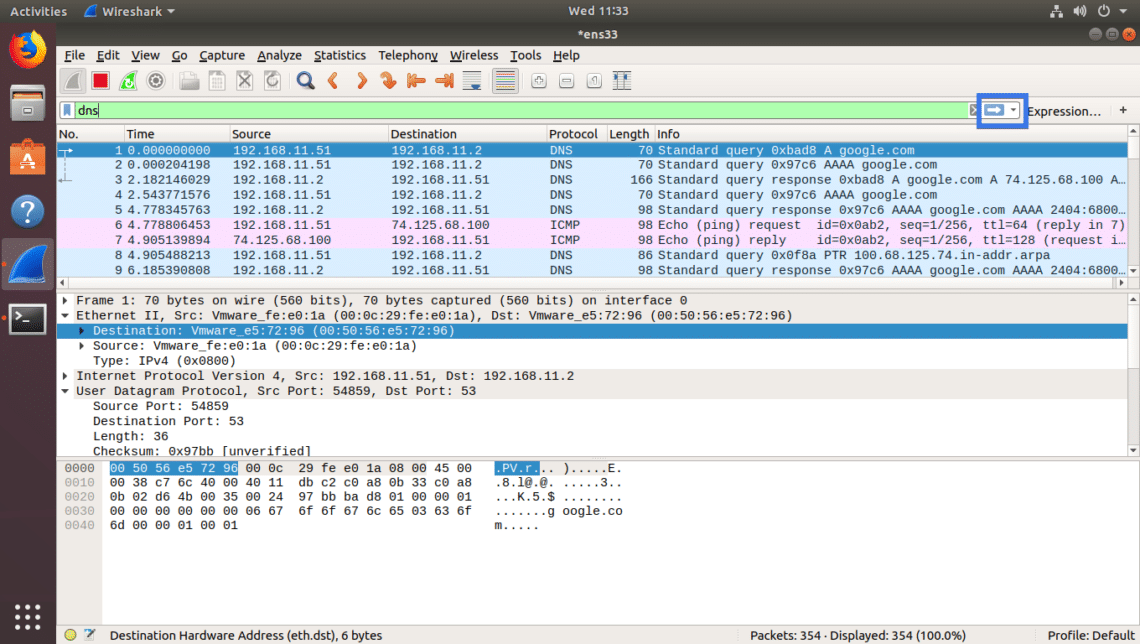 As you can see, only the DNS protocol packets are shown. 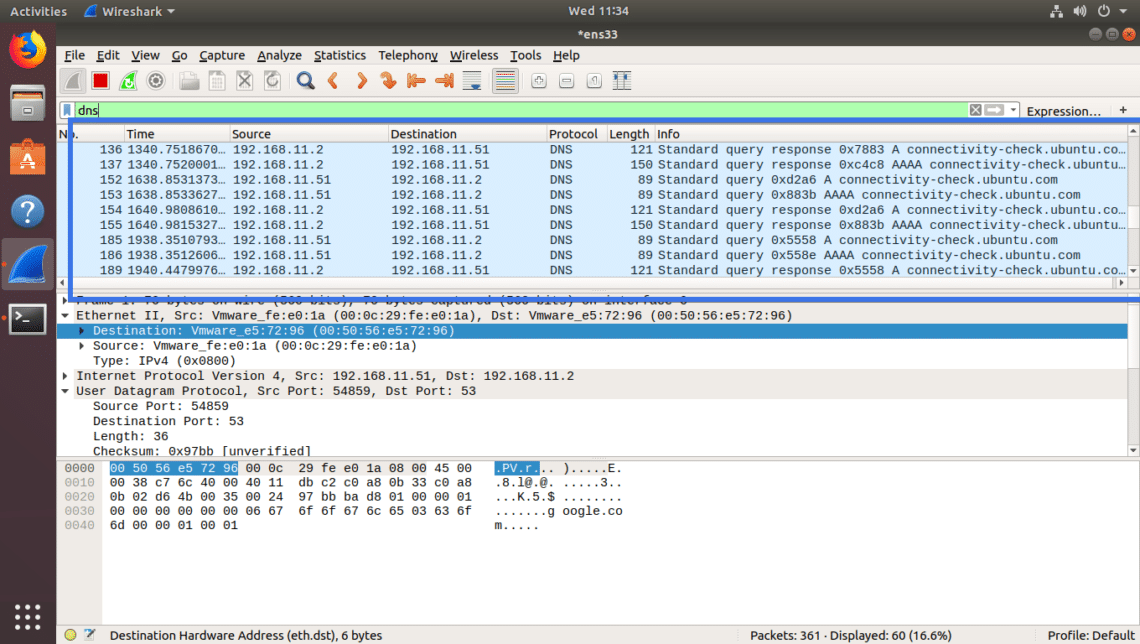 You can click on the red icon as marked in the screenshot below to stop capturing Wireshark packets. 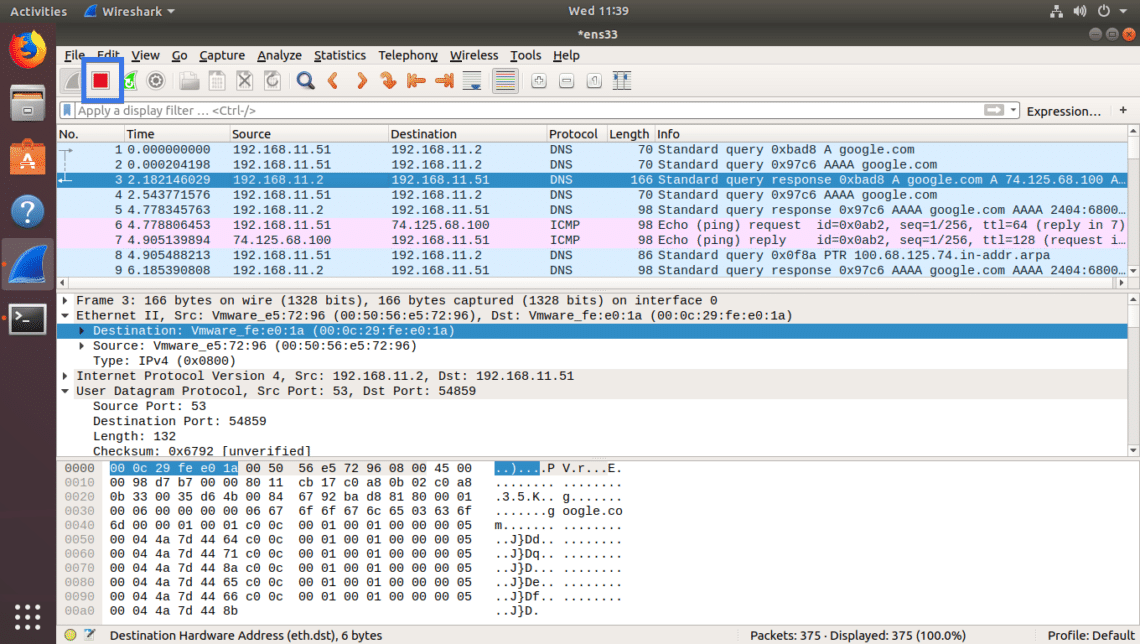 Saving Captured Packets to a File:

You can click on the marked icon to save captured packets to a file for future use. 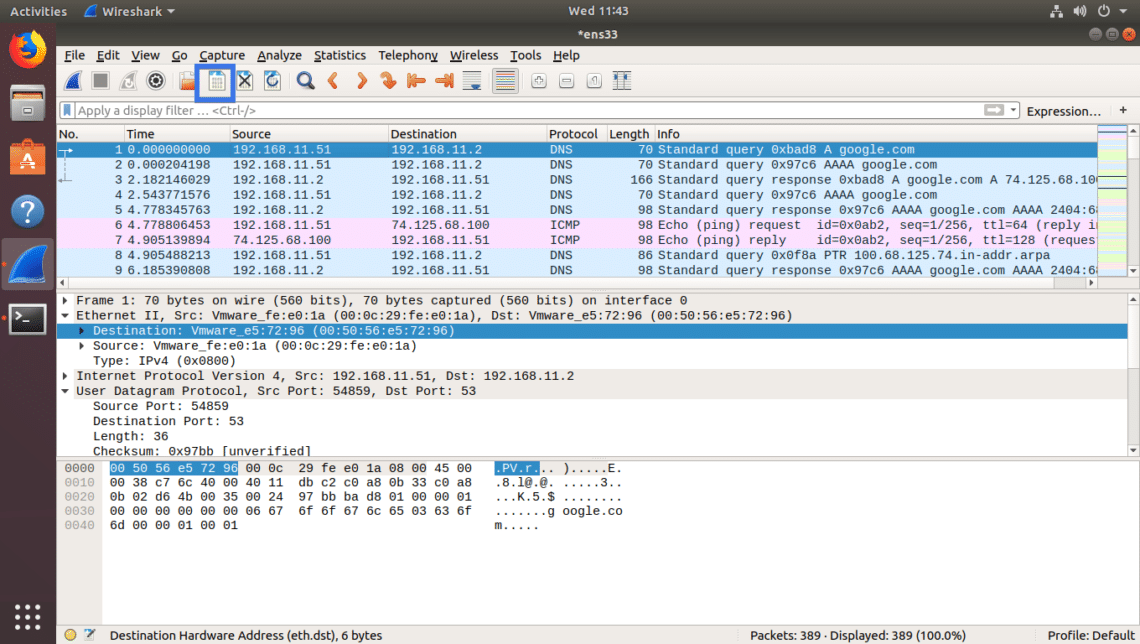 Now select a destination folder, type in the file name and click on Save. 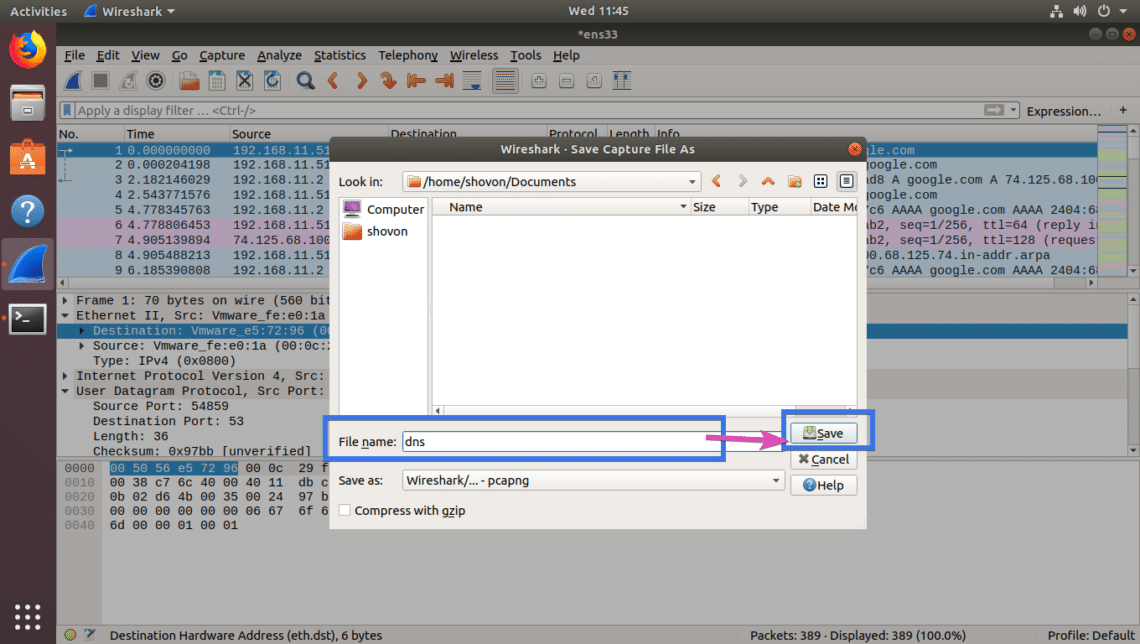 The file should be saved. 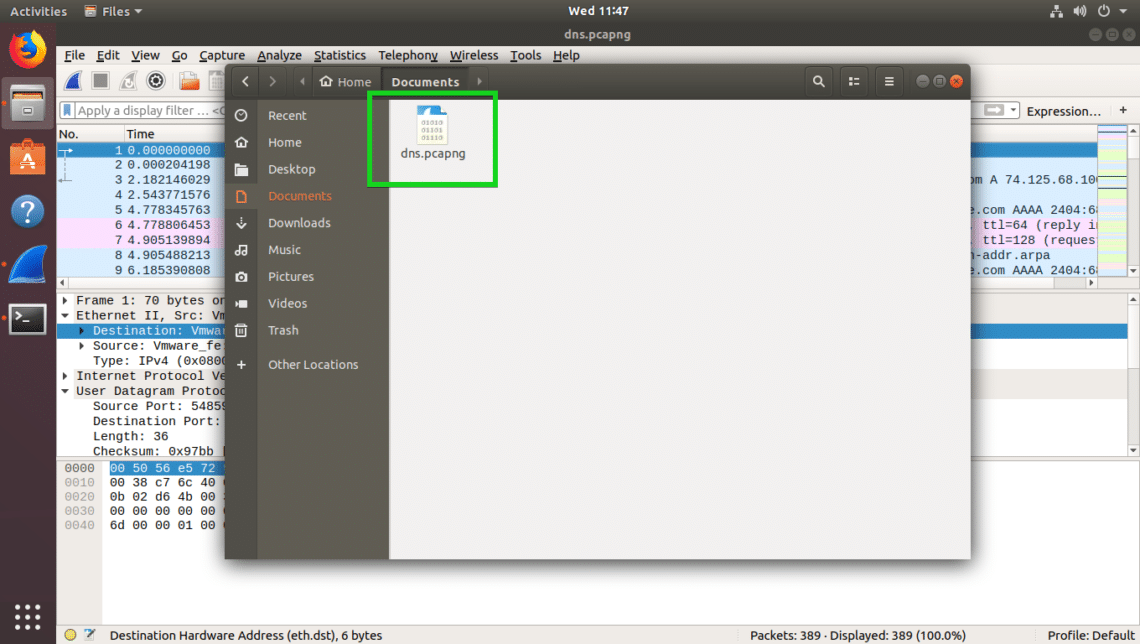 Now you can open and analyze the saved packets anytime. To open the file, go to File > Open from Wireshark or press <Ctrl> + o 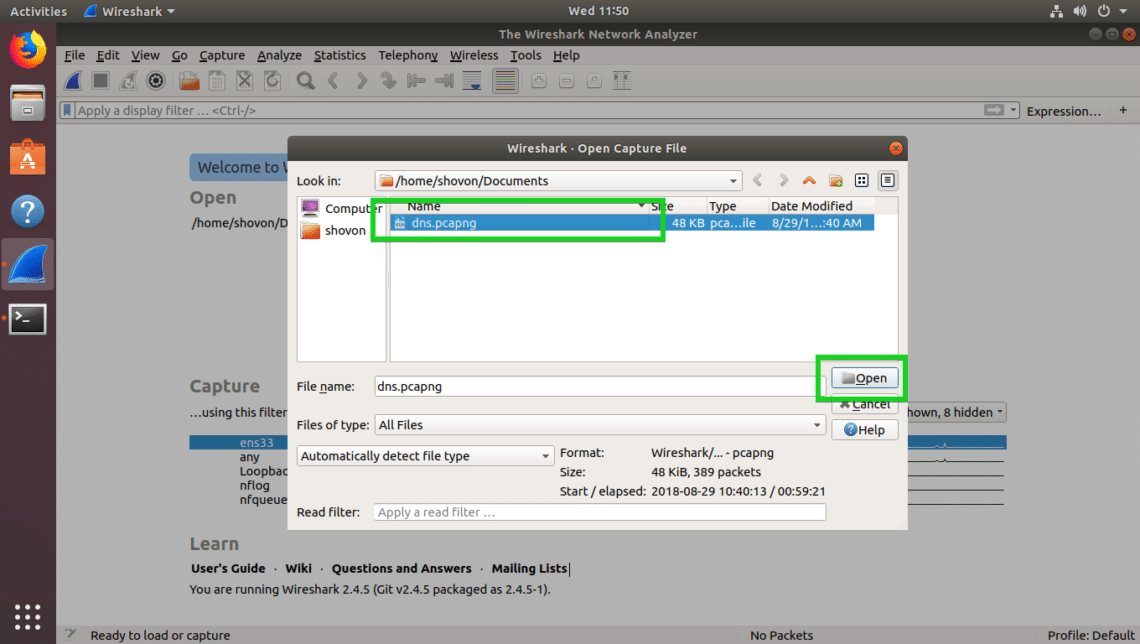 The captured packets should be loaded from the file. 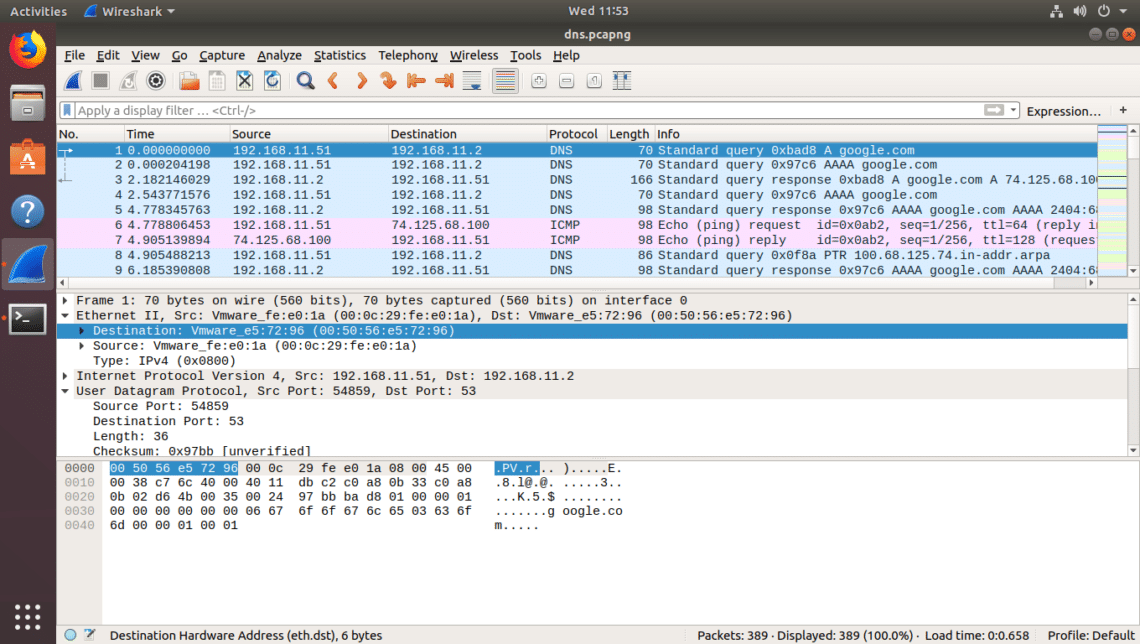 So that’s how you install and use Wireshark on Ubuntu. Thanks for reading this article.