In today’s modern world, being organized and well-structured is one of the most important soft skills that one must have. With everything evolving at such a fast pace, and competition between companies on the rise, the criteria for getting into large, well-established organizations is becoming increasingly difficult. Meeting deadlines, looking at and replying to emails, and other tasks are necessary skils. Keeping up-to-date with all these things is quite the hassle, though, as you may need to regularly open and check different applications for each separate task, which tends to overload you with work.

The Linux-based application called Kontact, a personal information manager, includes all these different applications and functions built into one. This article will show you how to install Kontact and will provide an overview of some of the features that Kontact offers to its users.

Kontact is a free and open-source Linux based Personal Information Manager (PIM) developed by KDE. Kontact unifies all the different applications that people usually interact with – email, calendar, contacts, etc. – into a single window. This allows users to handle all their emails, deadlines, and other data in a more organized and efficient manner. Being both highly customizable and secure, Kontact provides users with powerful tools, giving them full control over what to do with their data.

Having all these applications integrated inside a single window makes communication with colleagues and clients much easier, in addition to making work processes more productive.

Ubuntu offers two main ways for users to install Kontact on their computers. The following sections will take a look at these methods:

Kontact can easily be installed from Flatpak, a package management system that allows users to install applications without worrying about the libraries and dependencies needed for various Linux distributions.

Before installing Kontact, you first need to set up Flatpak in your system. To do this, open the terminal via the Ctrl+Alt+T shortcut, or by searching ‘terminal’ in the Ubuntu Dash. Enter the following command in the terminal to install Flatpak:

Next, to install applications from the graphical interface of Flatpak, the following command must be run to install the Flatpak Software plugin:

The third step is to add the flathub repository to your Ubuntu system. This can be done by running the following command:

Finally, restart your system. Once your computer reboots, open flathub and search ‘Kontact’ in the search bar.

After opening the Kontact flathub page, click on the install button.

This will bring up a prompt, where you will select the Open with option and then click on OK, which will automatically open the Flatpak software plugin and install Kontact.

A good alternative is to use the official Ubuntu repository, which remains the primary source from which Linux users install their applications. Since Kontact is included in the official repository of Ubuntu, it can be installed simply by using the apt command.

Before you install Kontact using this method, you must first update the apt cache of your system. This will prevent any issues from occurring later in the installation process. To do this, enter the following command into the terminal:

Kontact can now be installed by entering the following command into the terminal:

As mentioned above, Kontact consists of several integrated applications that each perform separate tasks. When you start Kontact, the main window opens, which shows the Side Panel that contains the following components: the menu bar, and the main landing page of the opened component. You can easily move around from one component to another by clicking on the specified component in the Side Bar.

The first component of Kontact is the Summary tab, which contains a complete overview of all the other components of Kontact. These include whether you have any upcoming events or any pending To-dos, or any new messages in your email (See the Main View image above for reference).

The next component is KMail, which is the email segment of Kontact. When Kmail starts for the first time, it will tell you to set up your email account. Enter your email address and password, and follow the next few steps to set it up. 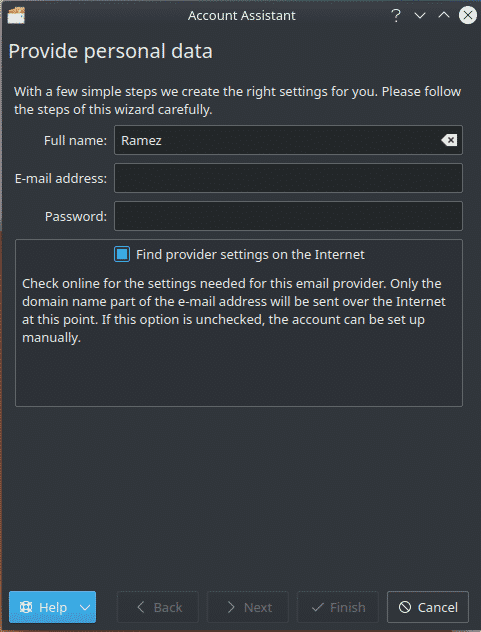 After setting up KMail, you can check your emails under the Inbox section. 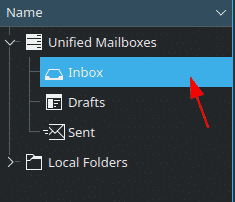 The third component is KAddressBook, which stores all your personal details and manages your contacts. The fourth component is KOrganizer, which gives you access to multiple calendars and to-do lists and thus helps in managing your events and tasks and other items that require deadlines. 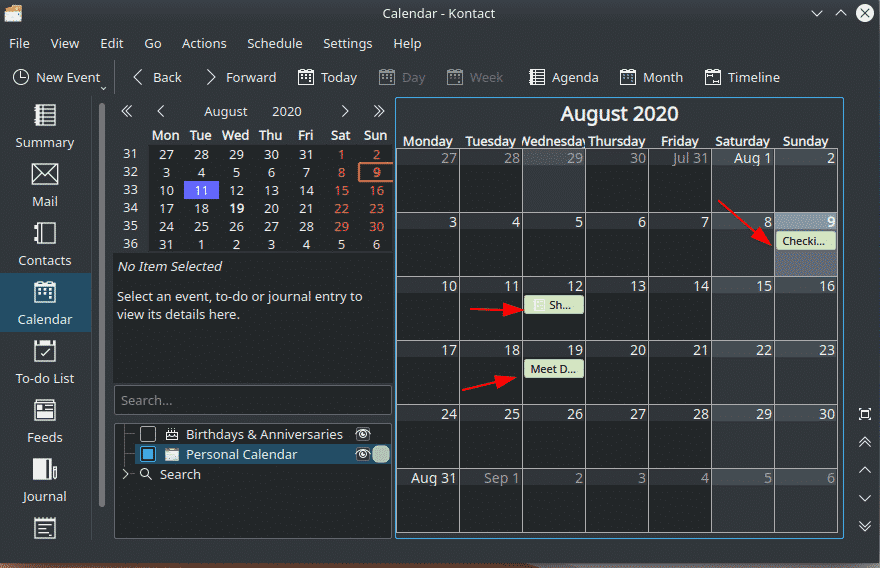 Another component of Kontact is Akregator, an RSS feed reader. 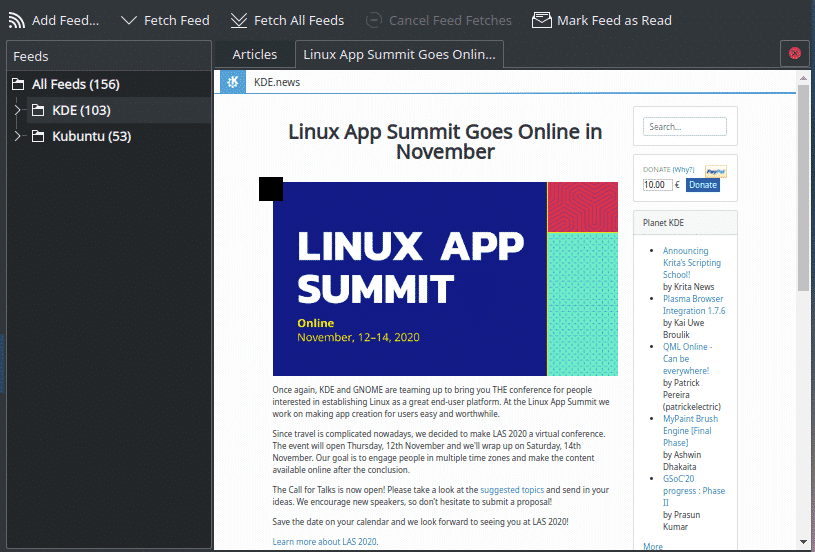 Kontact is a powerful tool that allows users to access multiple personal information management applications inside of a single window, without having to go to the hassle of overburdening yourself by opening multiple applications. Kontact is a reliable tool that has made the work of so many people easier.