NextCloud is a free self-hosted file sharing software. It can be accessed from the web browser. Next cloud has apps for Android, iPhone and Desktop operating systems (Windows, Mac and Linux). It is really user friendly and easy to use.

In this article, I will show you how to install NextCloud on Ubuntu. So, let’s get started.

On Ubuntu 16.04 LTS and later, NextCloud is available as a snap package. So, it is very easy to install.

As you can see, NextCloud snap package is being installed.

NextCloud snap package is installed at this point.

Now, you have to create an administrator user for managing NextCloud. To do that, you have to access NextCloud from a web browser.

First, find out the IP address of your NextCloud server with the following command:

Now, from any web browser, visit the IP address 192.168.21.128.  Now, type in your Administrator username and password and click on Finish setup. 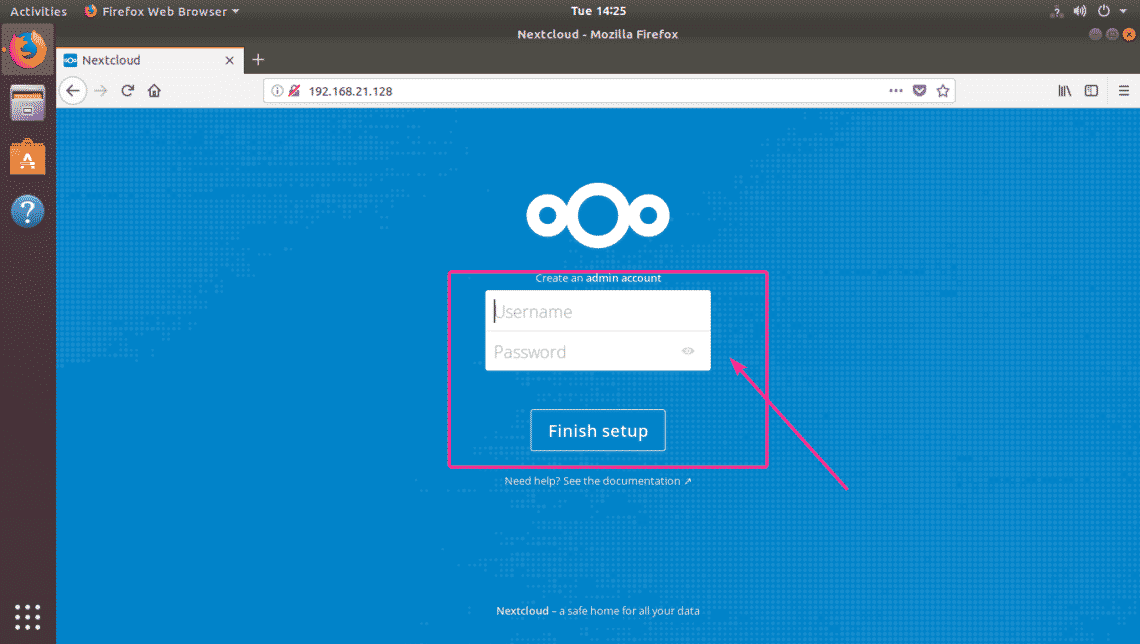 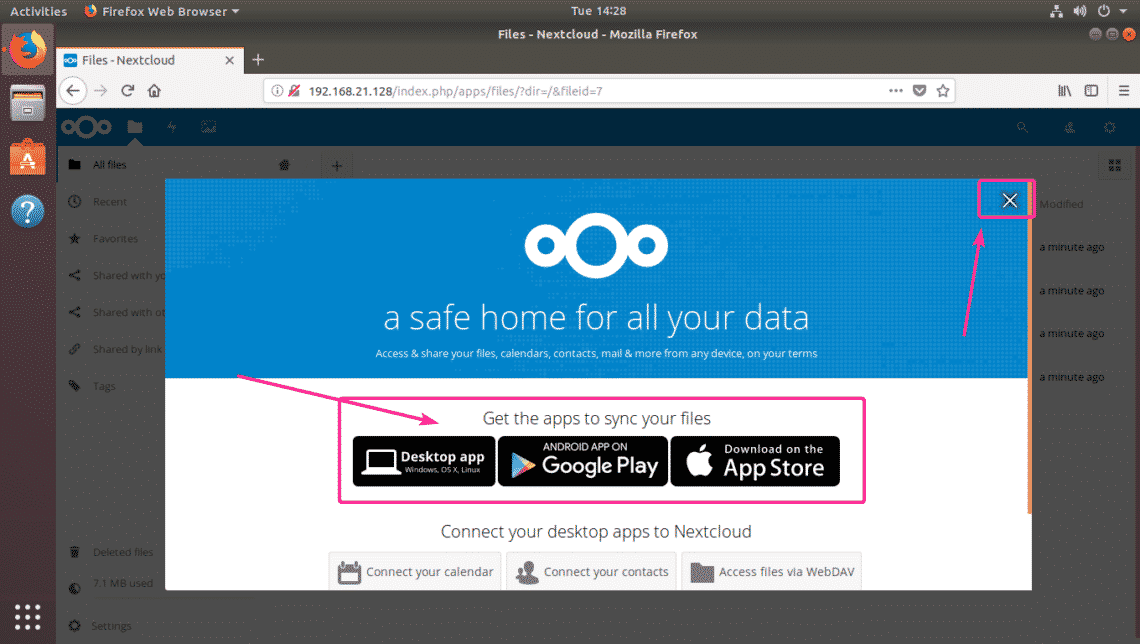 This is the NextCloud dashboard. Now, you can manage your files from the web browser using NextCloud. 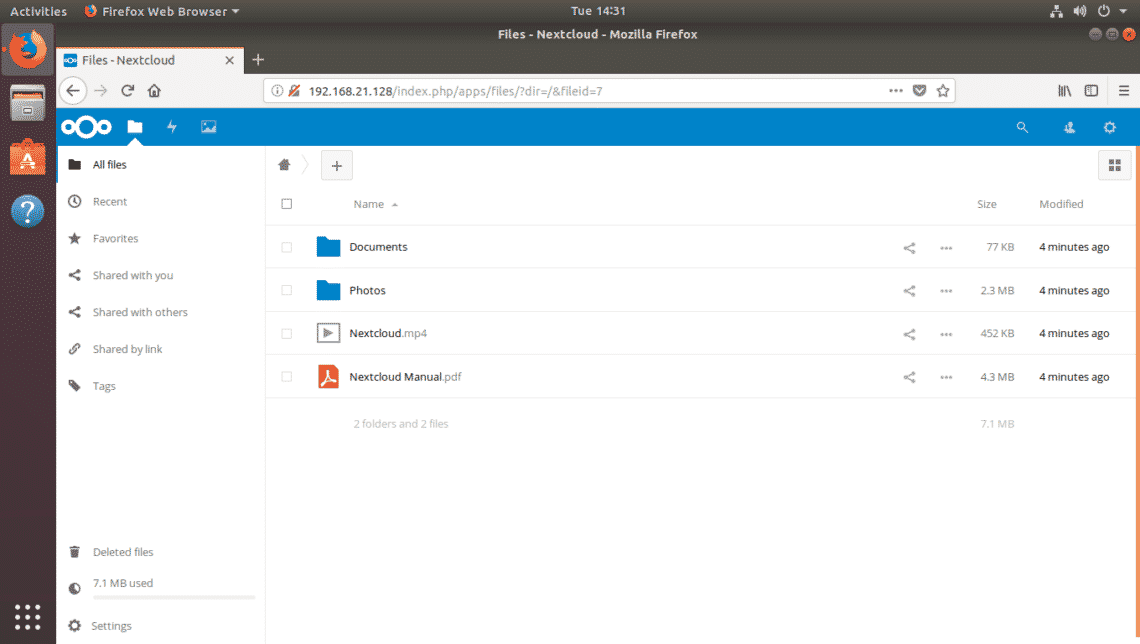 By default, NextCloud stores files in your root partition where the Ubuntu operating system is installed. Most of the time, this is not what you want. Using a dedicated hard drive or SSD is always better.

In this section, I will show you how to use a dedicated hard drive or SSD as a data drive for NextCloud. So, let’s get started.

Let’s say, you have a dedicated hard drive on your Ubuntu NextCloud server which is recognized as /dev/sdb. You should use the whole hard drive for NextCloud for simplicity.

First, open the hard drive /dev/sdb with fdisk as follows:

/dev/sdb should be opened with fdisk partitioning utility. Now, press o and then press <Enter> to create a new partition table.

NOTE: This will remove all your partitions along with data from the hard drive.

A new partition should be created. Now, press w and press <Enter>.

The changes should be saved.

Now, format the partition /dev/sdb1 with the following command:

The partition should be formatted.

Now, copy everything (including the dot/hidden files) from the /var/snap/nextcloud/common/nextcloud/data directory to /mnt directory with the following command:

Now, unmount the /dev/sdb1 partition from the /mnt mount point with the following command:

Now, you will have to add an entry for the /dev/sdb1 in your /etc/fstab file, so it will be mounted automatically on the /var/snap/nextcloud/common/nextcloud/data mount point on system boot.

First, run the following command to find out the UUID of your /dev/sdb1 partition:

It will be different for you. So, replace it with yours from now on.

Now, open the /etc/fstab file with the following command:

Now, add the line as marked in the screenshot below at the end of the /etc/fstab file. Once you’re done, press <Ctrl> + x, then press y followed by <Enter> to save the file.

Now, reboot your NextCloud server with the following command:

Once your computer boots, run the following command to check whether the /dev/sdb1 partition is mounted to the correct location.

As you can see, /dev/sdb1 is mounted in the correct location. Only 70MB of it is used.

As you can see I uploaded some files to NextCloud. 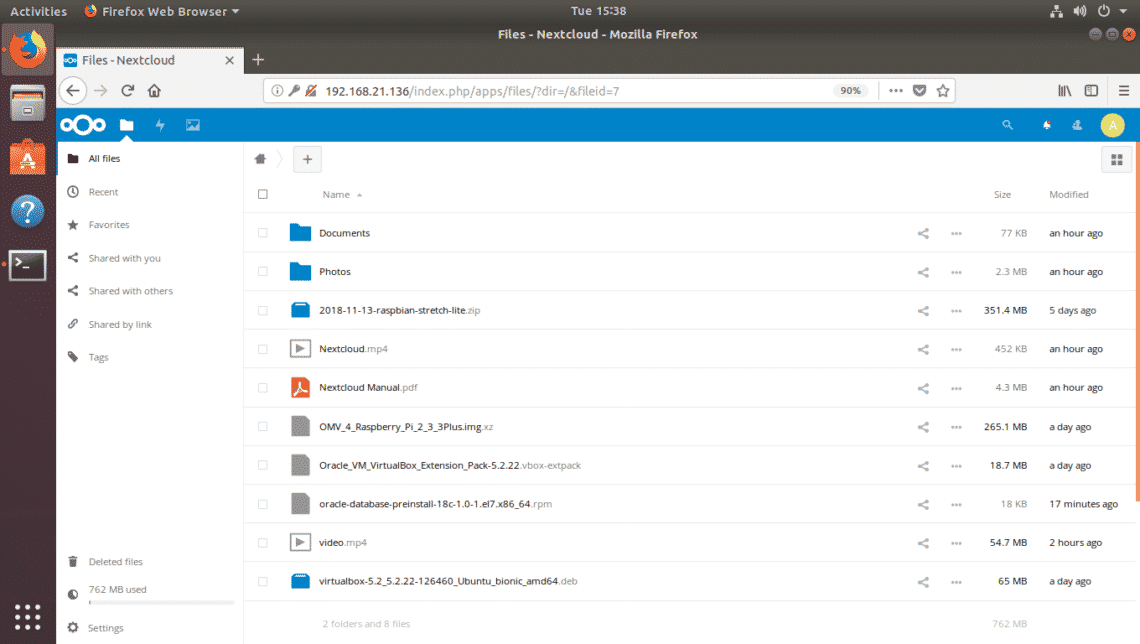 As you can see, the data is saved on the hard drive that I just mounted. Now, 826 MB is used. It was 70MB before I uploaded these new files. So, it worked.

That’s how you install NextCloud on Ubuntu. Thanks for reading this article.