In this article, I will show you how to install GNOME 3 extensions on Ubuntu 18.04 LTS. Let’s get started.

I prefer installing it from the Terminal, as Ubuntu Software Center in my virtual machine is a bit laggy.

GNOME Tweak Tool should be installed.

Now you can to go the Application Menu and find GNOME Tweak Tool there as you can see in the marked section of the screenshot below. Click on the Tweaks icon. 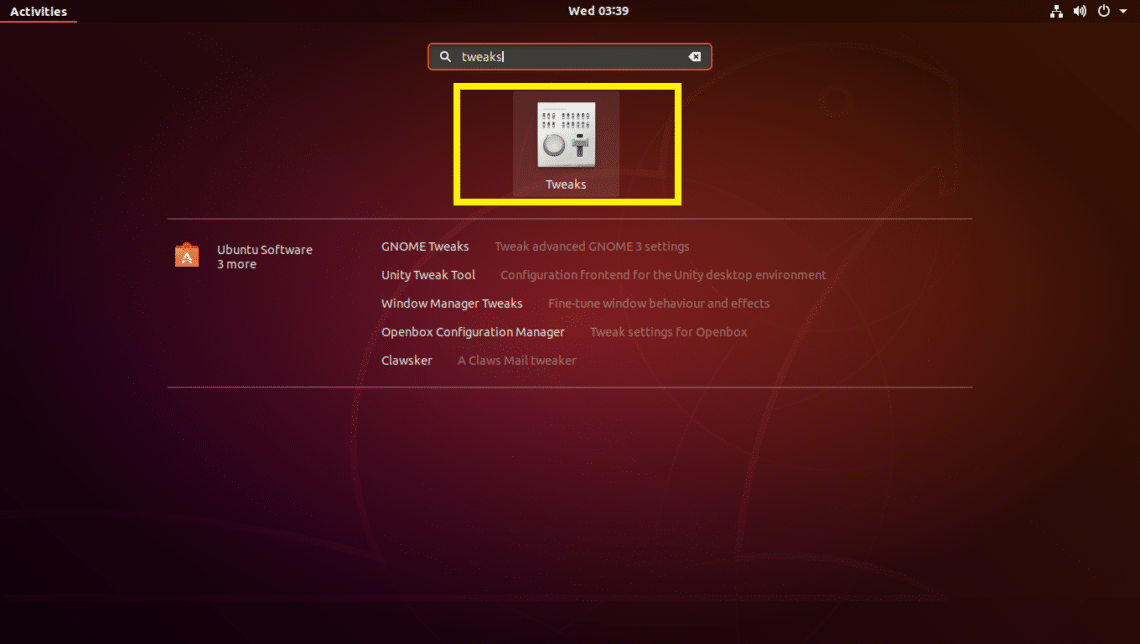 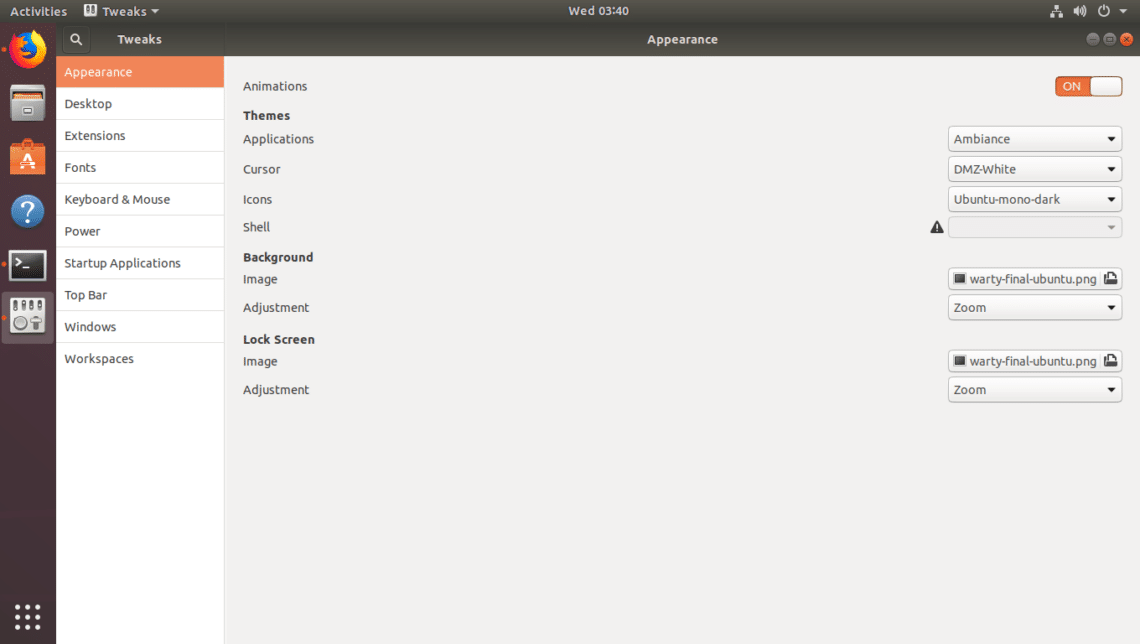 You usually install GNOME 3 extensions from the official website of GNOME 3 at https://extensions.gnome.org

Once you visit the GNOME Extensions website, you should see the following page. Now click on the marked link to install GNOME Shell Integration Add-ons on your browser. 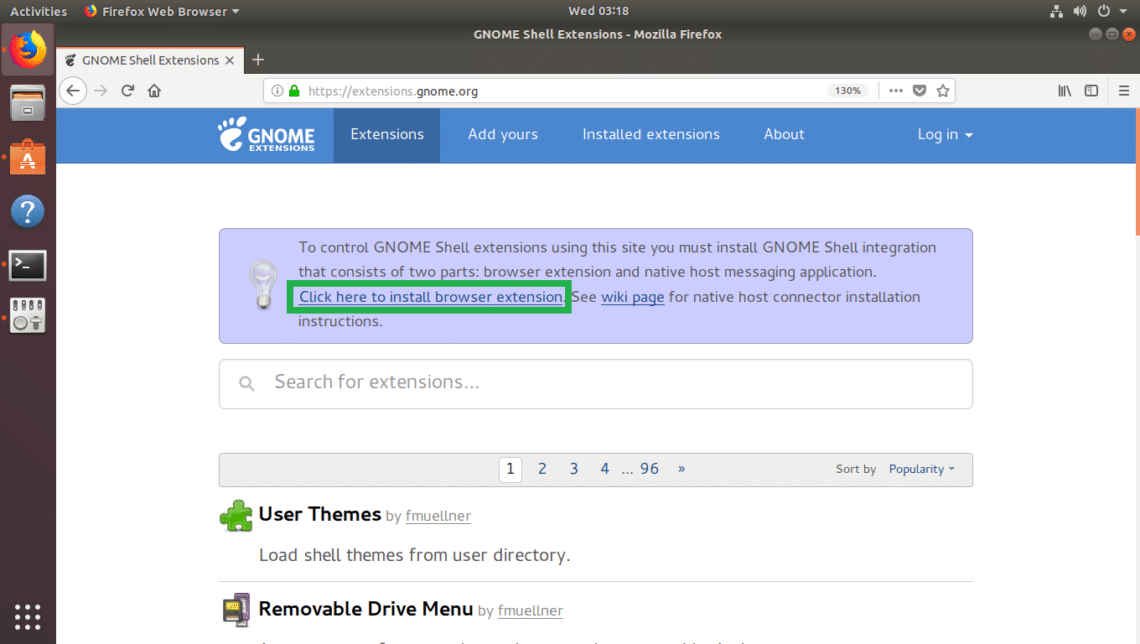 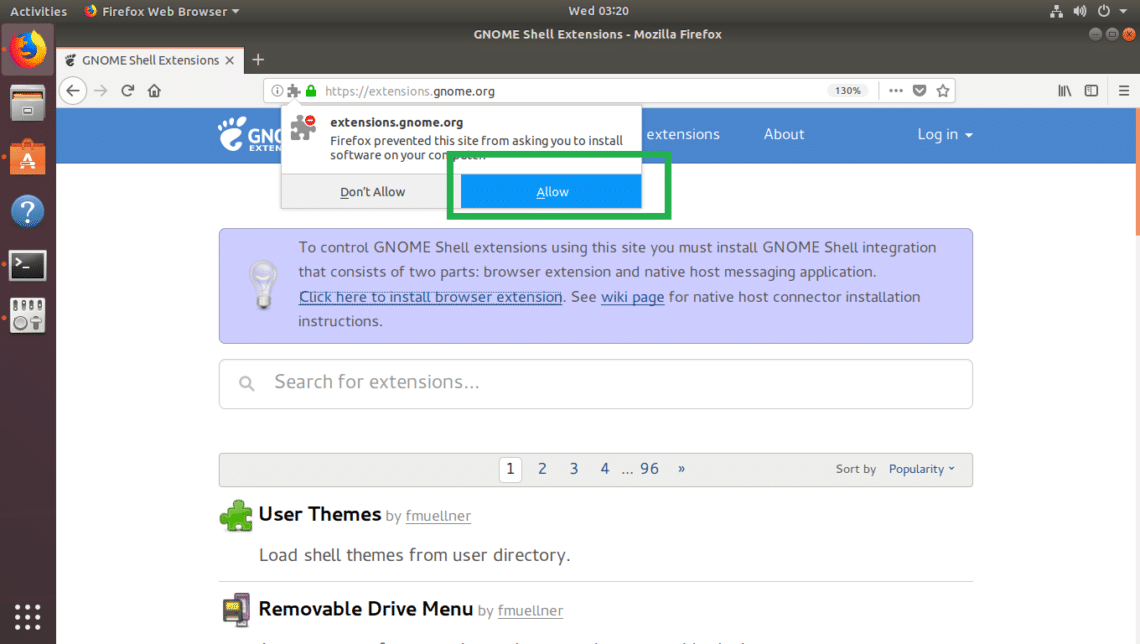 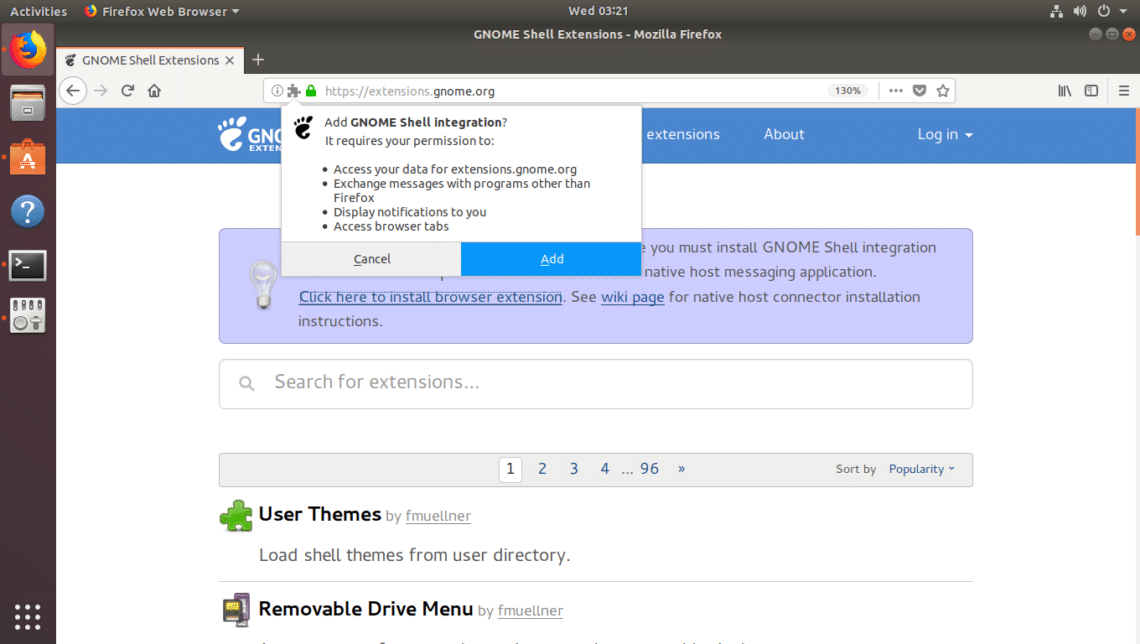 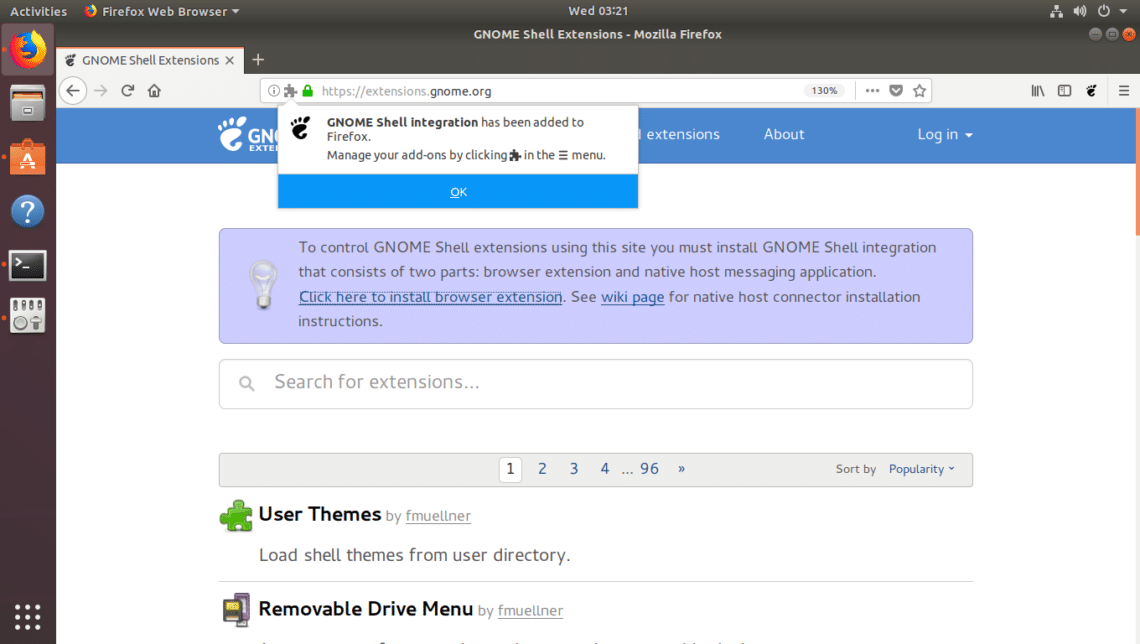 If you refresh the page now, you may see the following error. It means we have to install native host connector for the GNOME Shell Integration to work. 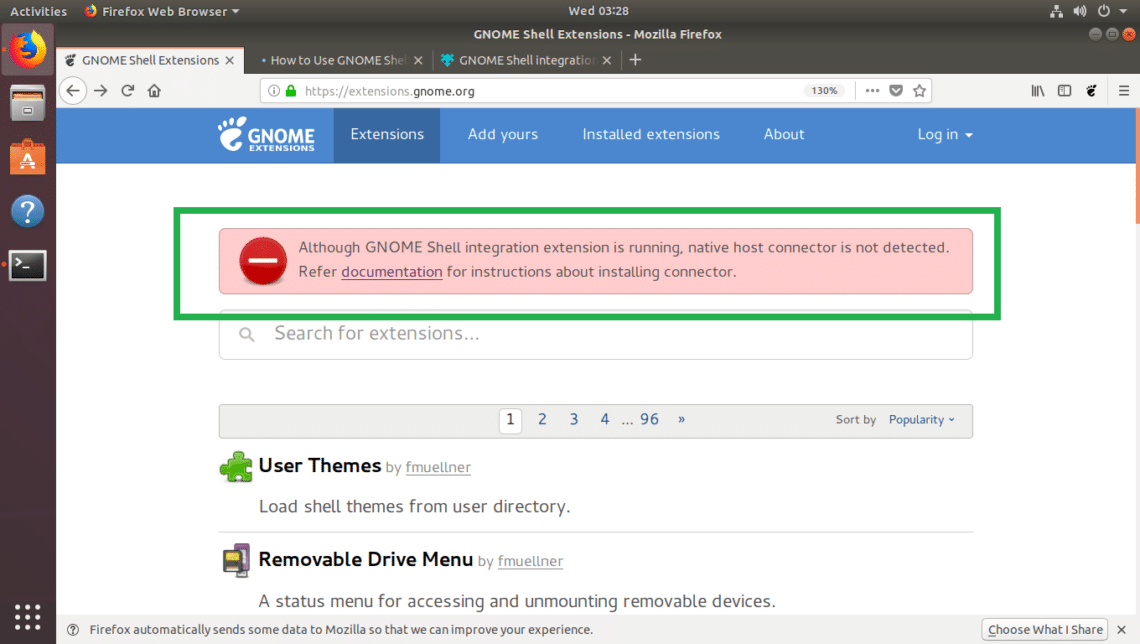 It should be installed.

Now refresh the GNOME Extensions page and you should not see any more errors. 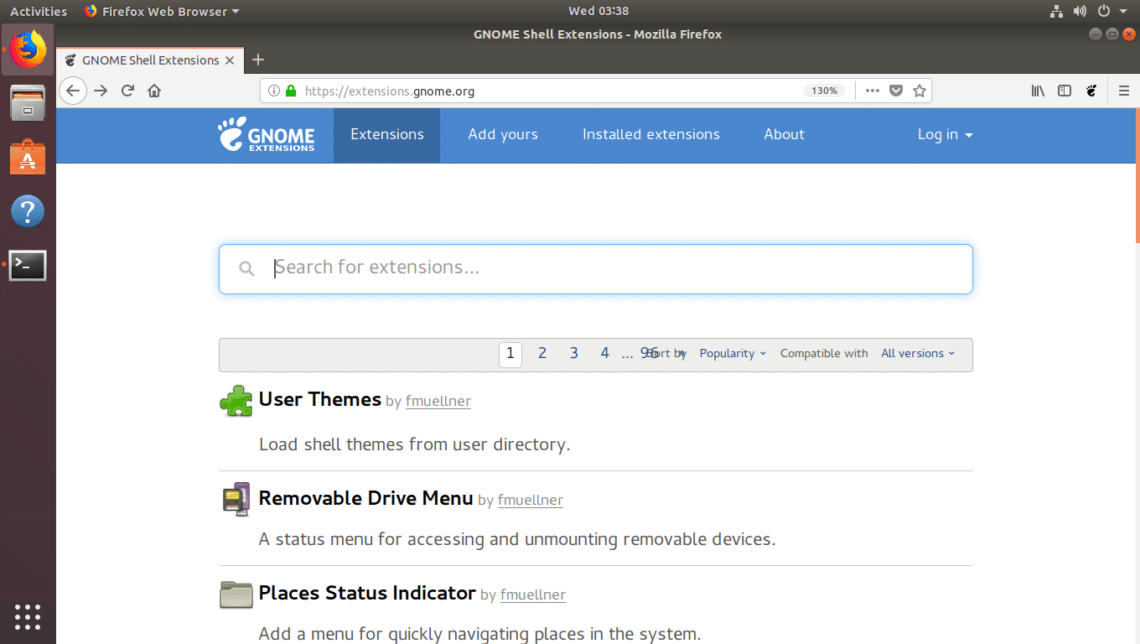 Some of the important GNOME extensions are available in the official package repository of Ubuntu 18.04 LTS.

You can see a list of all the GNOME extensions available in the official package repository of Ubuntu with the following command:

All the GNOME shell extensions packages are listed. The green texts are the package name that you use to install with APT package manager.

You can also type in the following command and press <Tab> to see all the GNOME extension packages that you can install.

Let’s install gnome-shell-extension-dash-to-panel package, which is the Dash To Panel extension:

The extension should be installed.

Now from GNOME Tweak Tool, go to Extensions tab and you should be able to find it. As you can see, I’ve already enabled it using the toggle button at the end as marked green in the screenshot below.

NOTE: At times, you need to restart your computer for the changes to take effect. 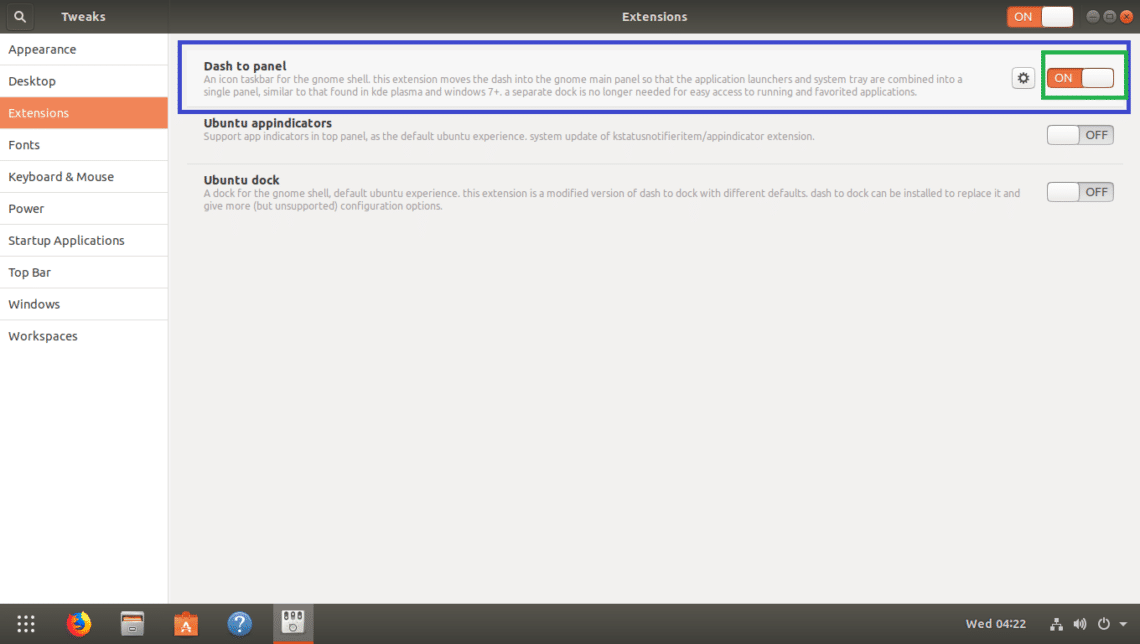 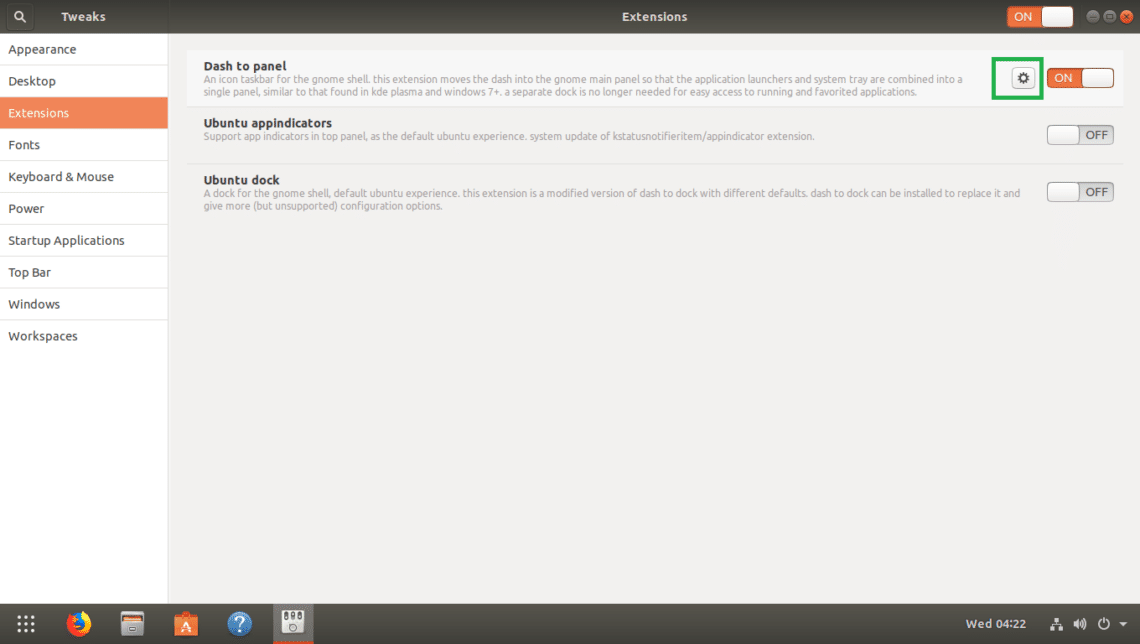 The Dash to Panel extension can be configured. As you can see, once I clicked on the gear icon, more options to configure the extension shows up. 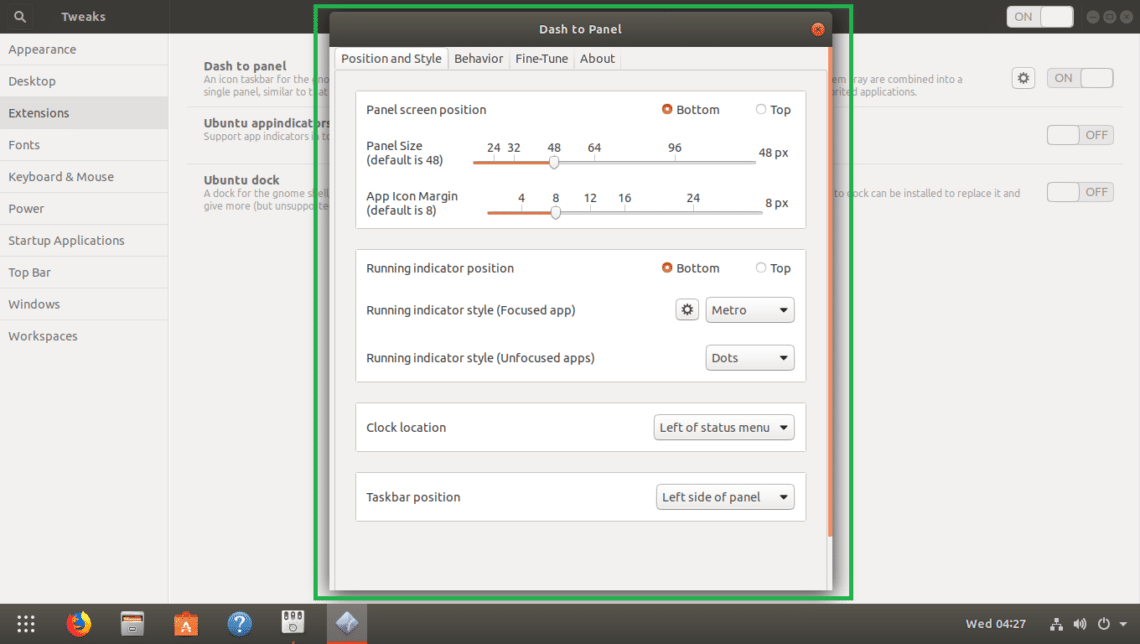 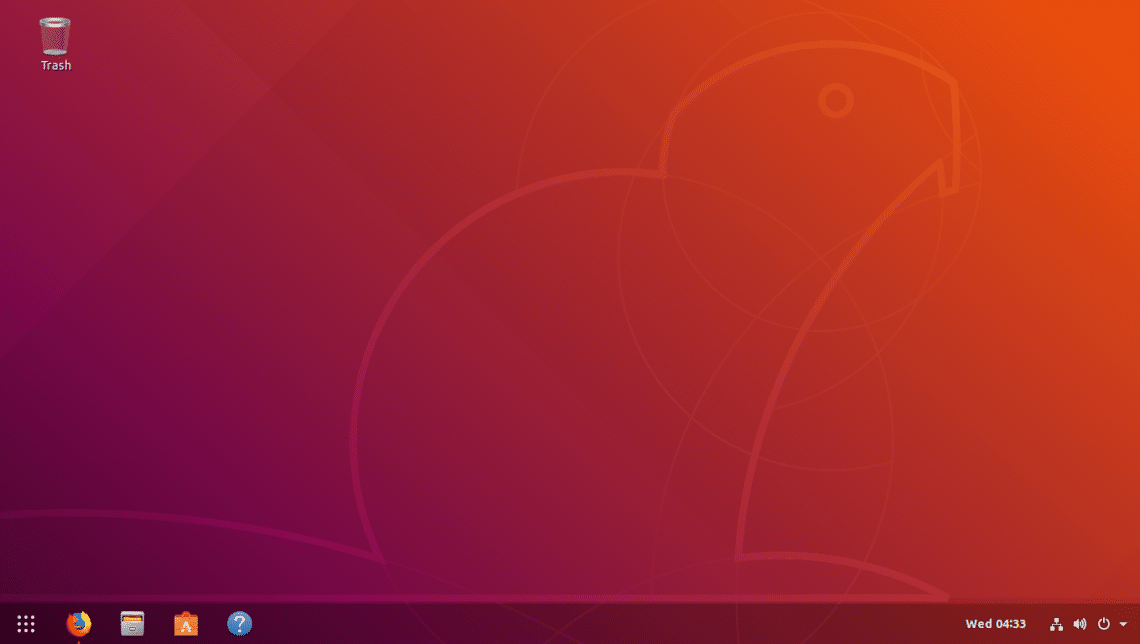 You can also install new extensions from the official GNOME extensions website.

First find out your GNOME Shell version with the following command:

Now find the extension that you want to install from https://extensions.gnome.org

Then go to the extensions page and you should see the following window. 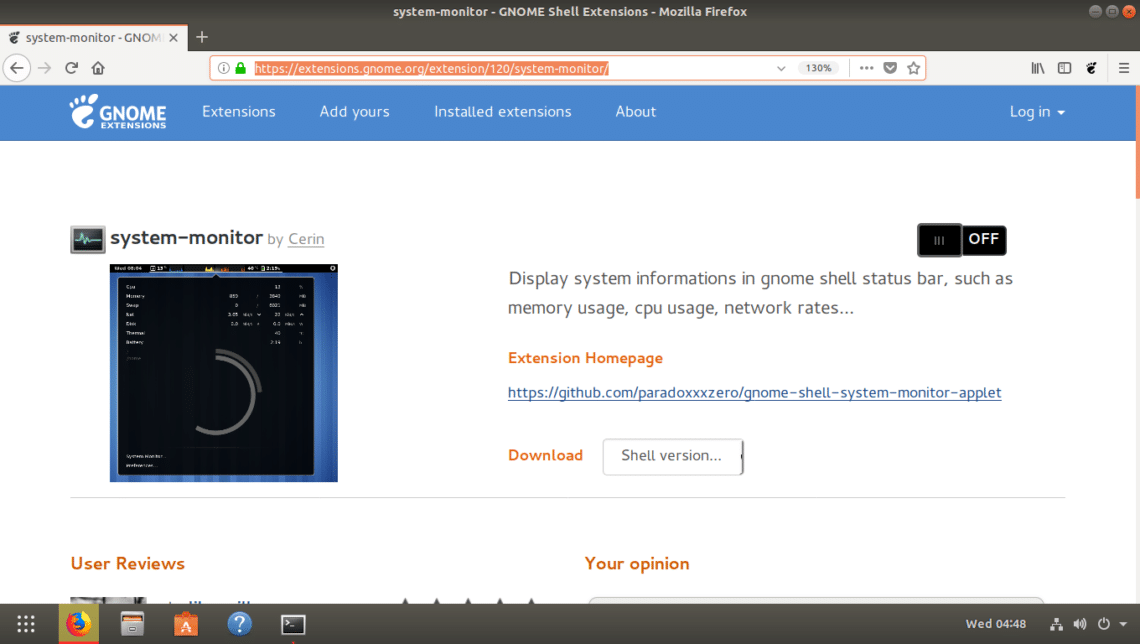 Now select your GNOME Shell version. In my case it’s 3.28. 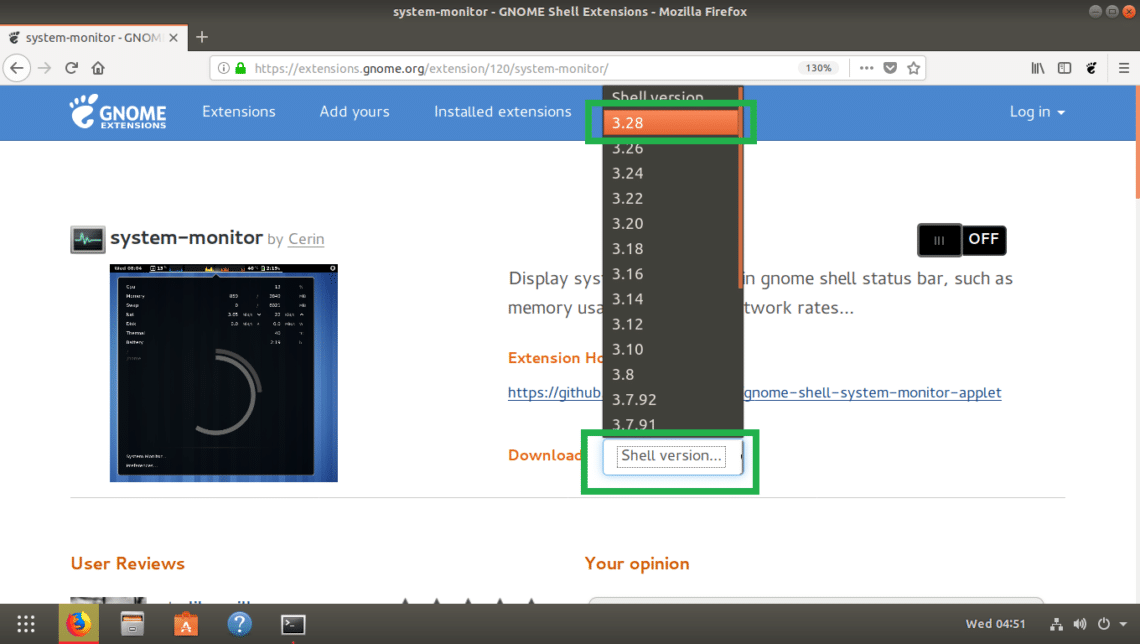 Now to install the extension, click on the marked toggle button. 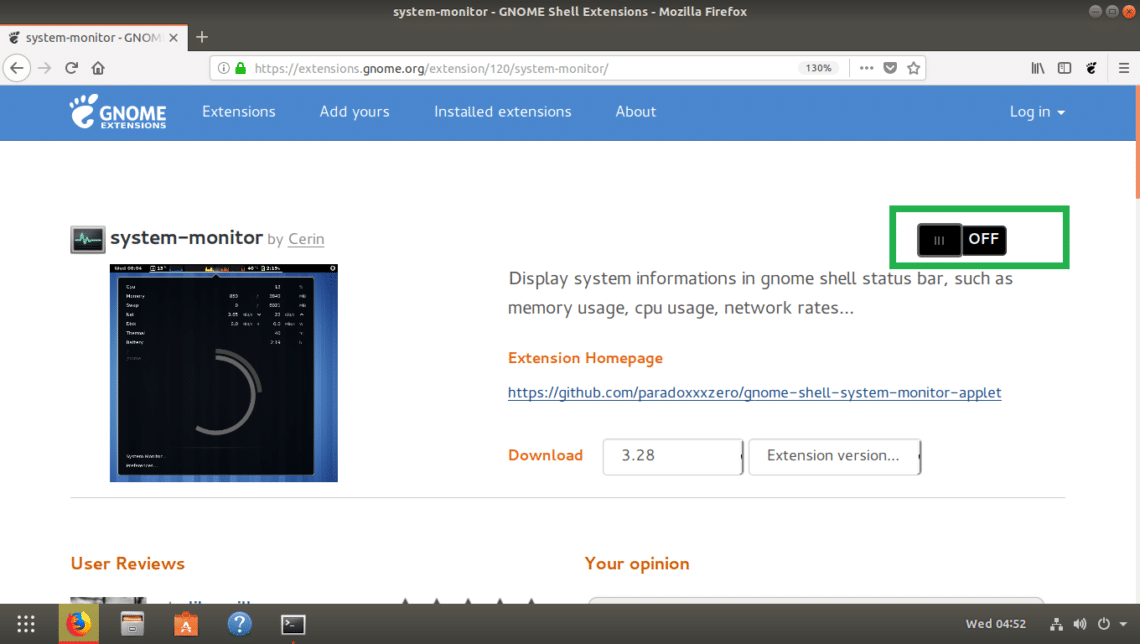 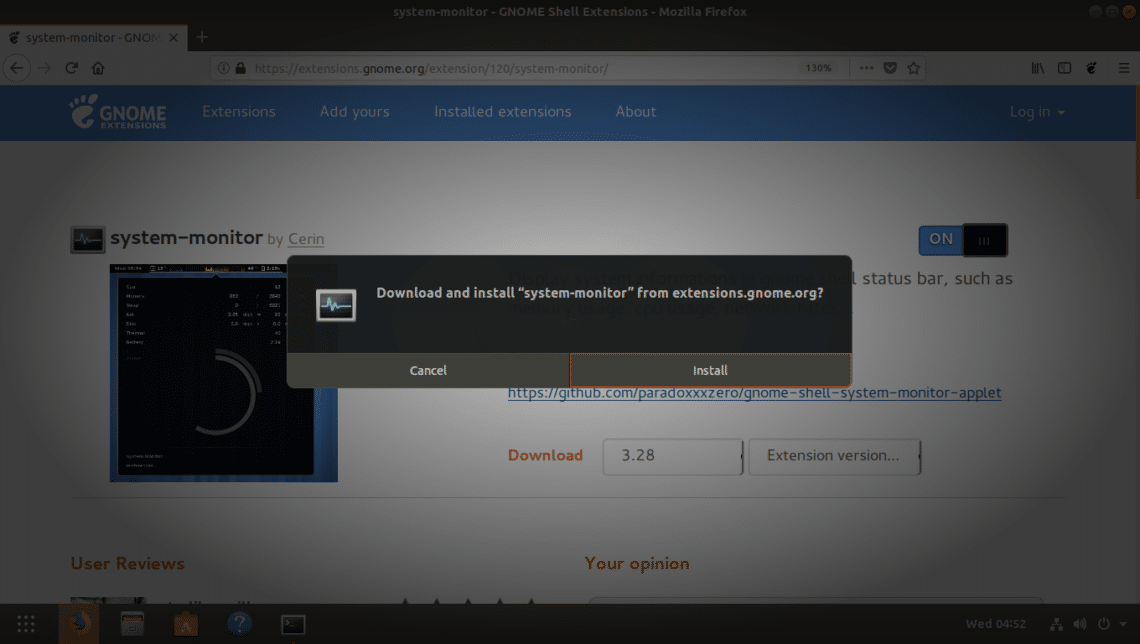 Most of the cases, the extension should be installed and activated. At times you may see errors as follows. Don’t freak out. It means, you need to install some other packages in order for the extension to work. Just install the package that it tells you to. 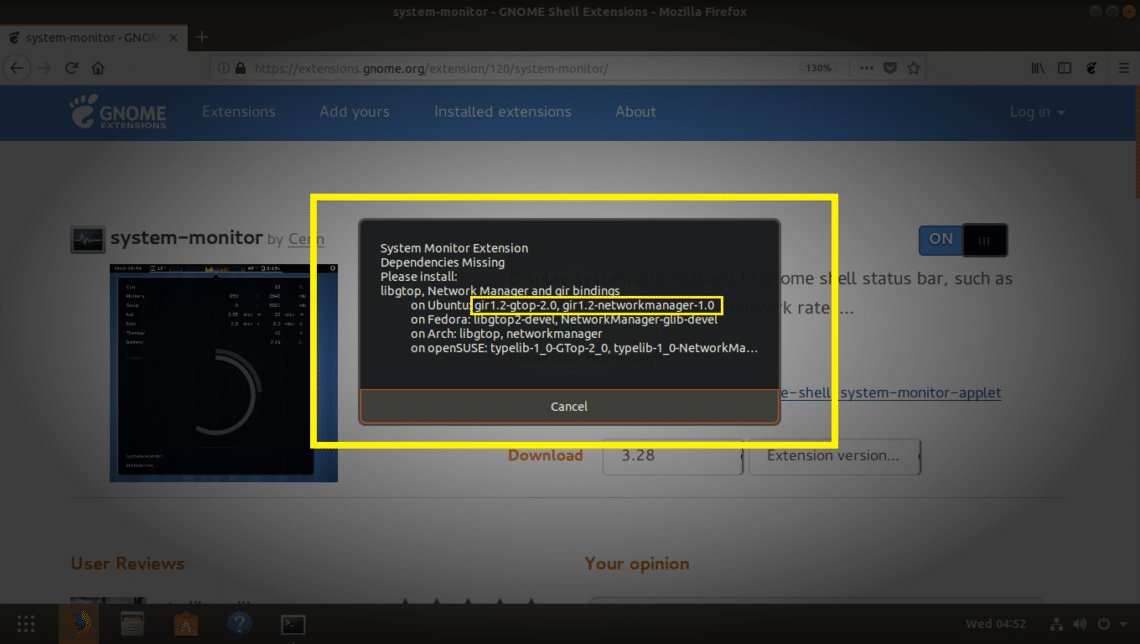 In my case, I had to run the following command:

The dependencies should be installed.

Now reboot your computer and try to install it again. It should work. 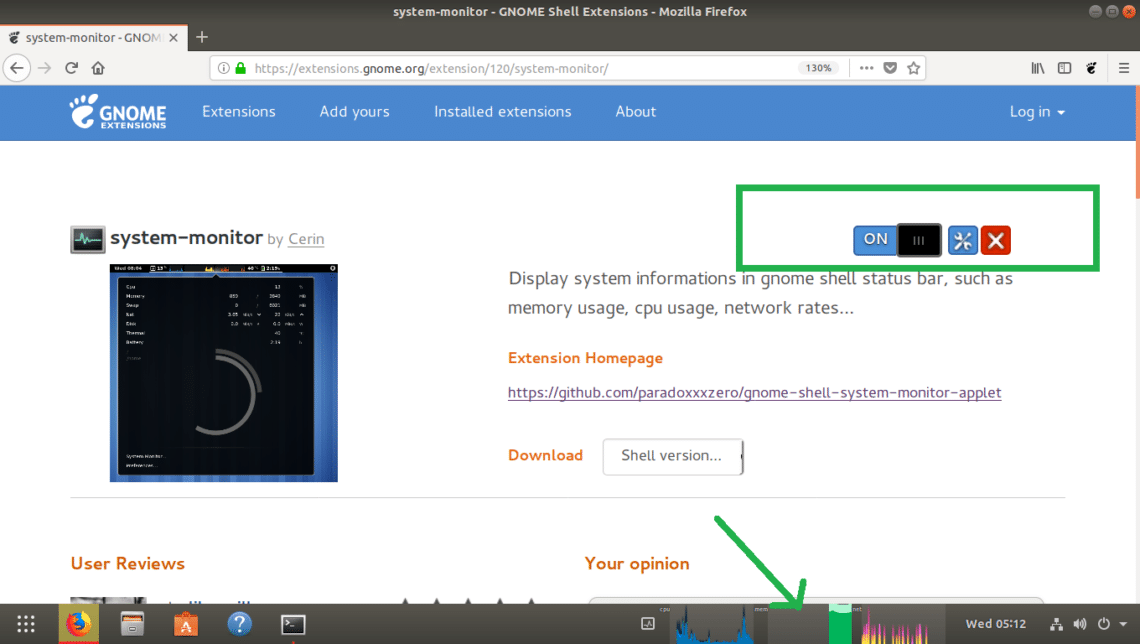 You can also manage the extension from GNOME Tweak Tool. 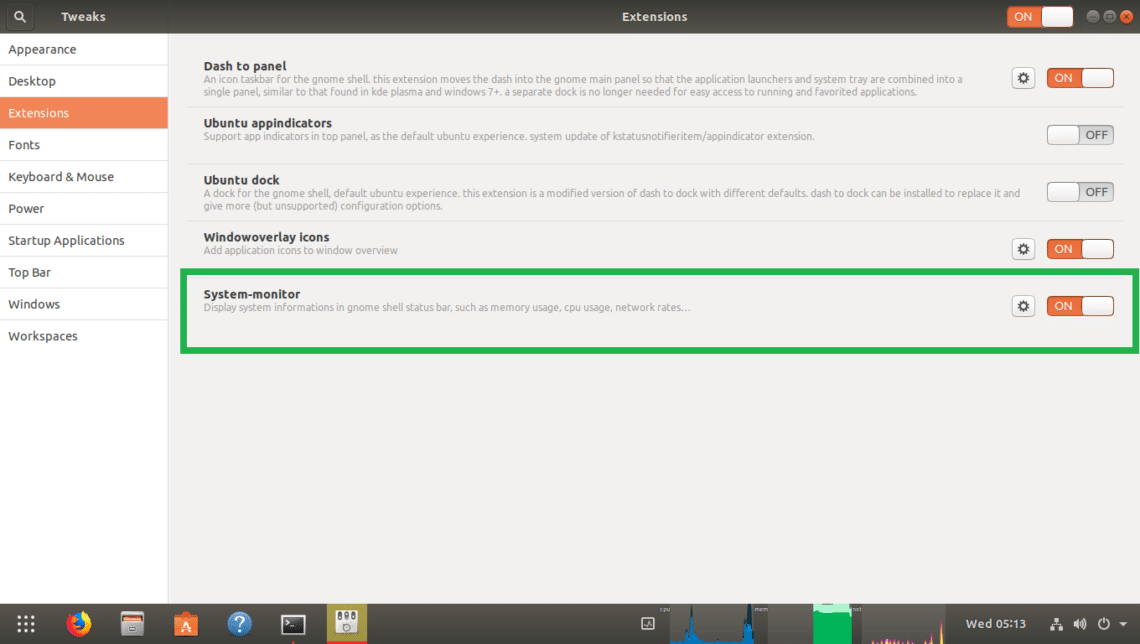 If you install extensions from the official website using the APT package manager, then the dependencies of that extension will also be installed automatically. You won’t have to do anything manually. Also, you will be sure that it will work on your Ubuntu 18.04 LTS operating system.

I recommend you always try to install GNOME extensions from the official package repository of Ubuntu 18.04 LTS.