Etcher is a free tool for flashing microSD card with the operating system images for Raspberry Pi single board computers. The user interface of Etcher is simple and it is really easy to use. It is a must have tool if you’re working with a Raspberry Pi project. I highly recommend it. Etcher is available for Windows, macOS and Linux. So you get the same user experience no matter which operating system you’re using. 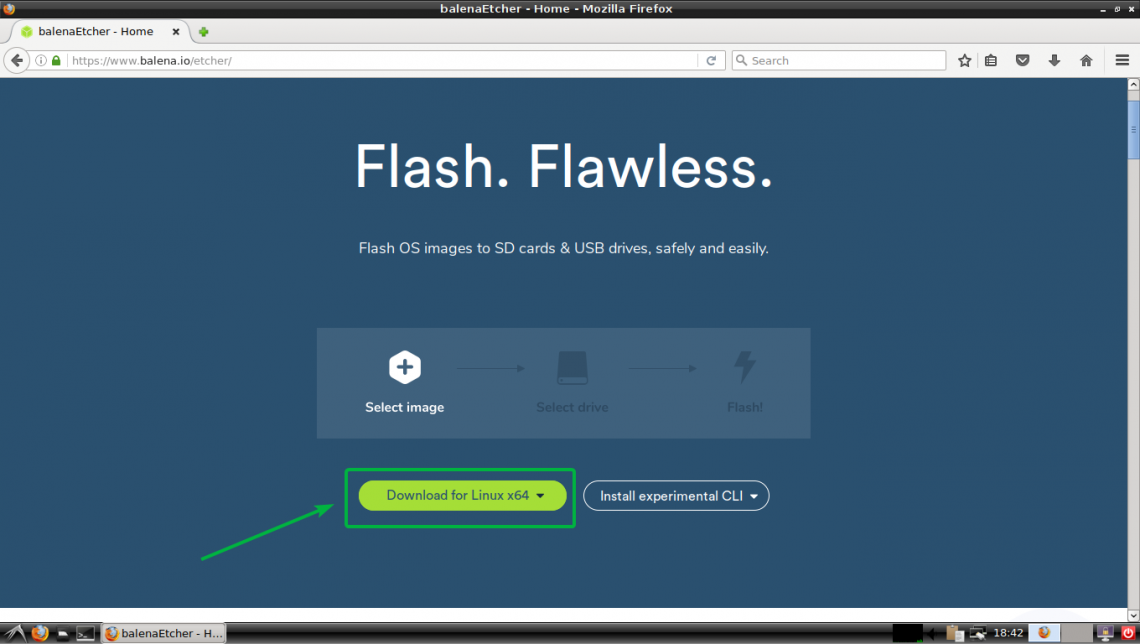 If that is the case for you as well, scroll down a little bit and click on the link as marked in the screenshot below. 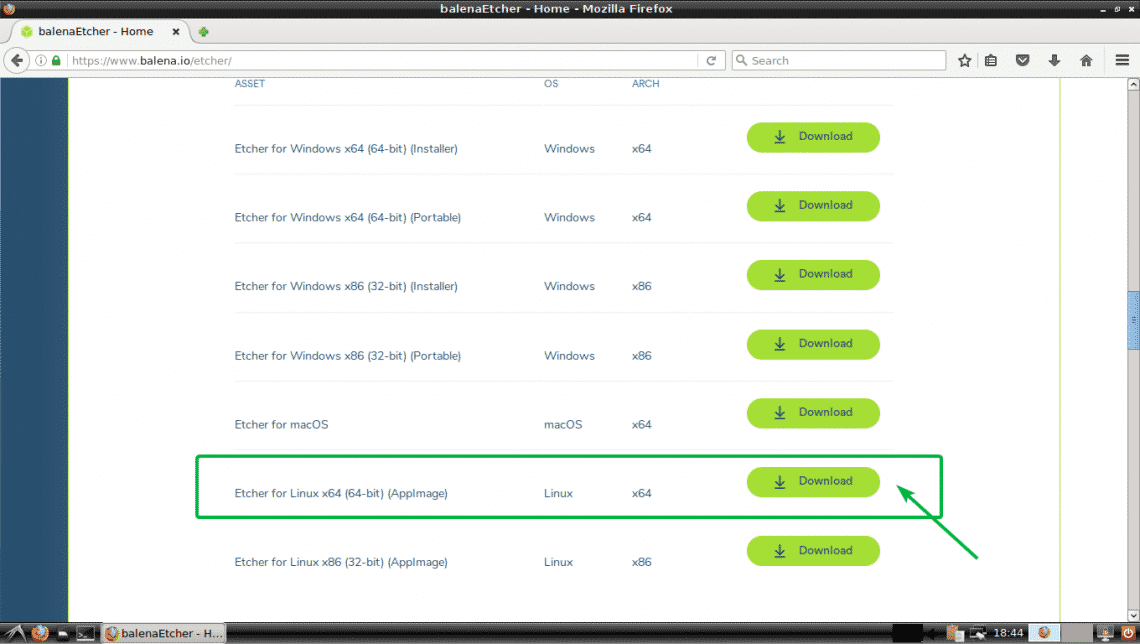 Your browser should prompt you to save the file. Just, click on Save File. 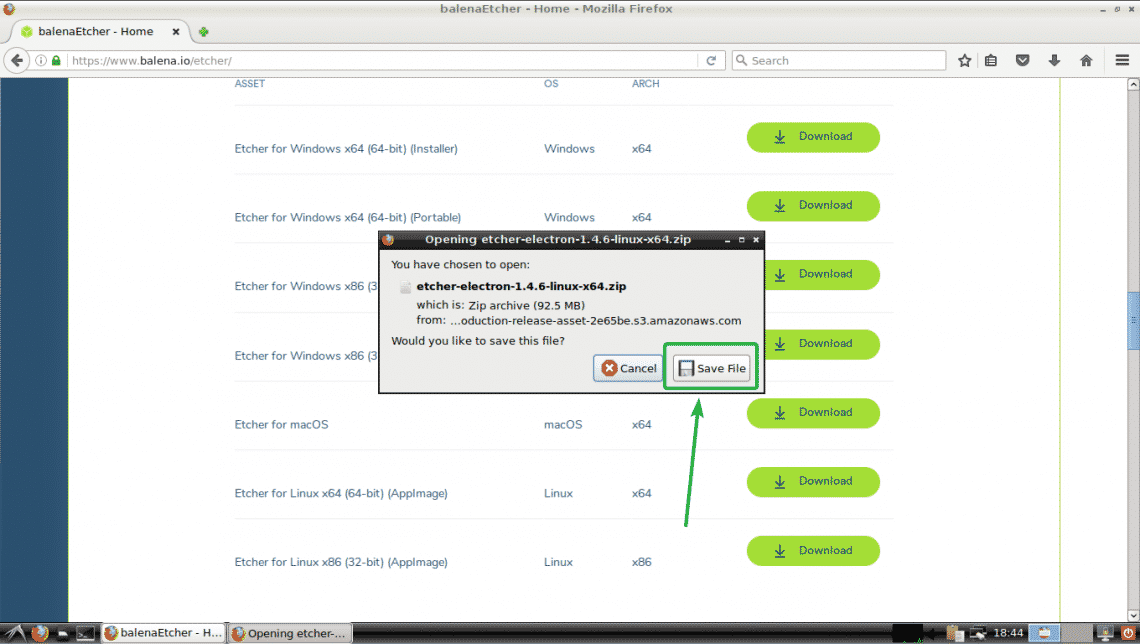 Your download should start as you can see in the screenshot below. 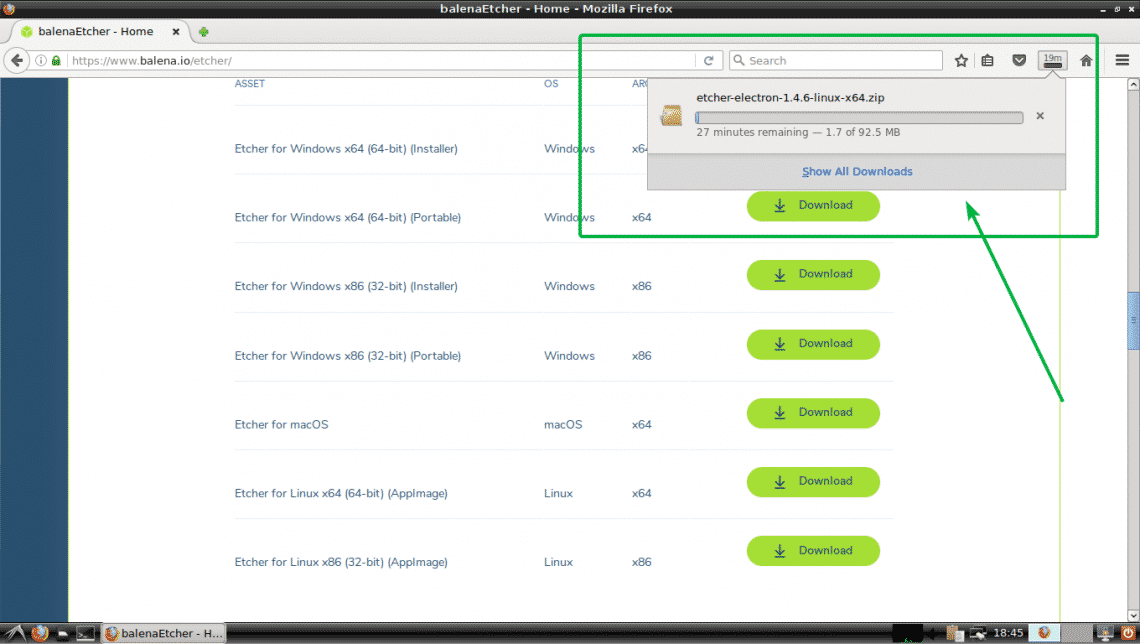 First, update the package repository of your Ubuntu or Debian machine with the following command:

zenity should be installed.

Now, navigate to the ~/Downloads directory where you downloaded Etcher with the following command:

As you can see, the Etcher zip archive file is here.

Now, unzip the file with the following command:

Now, move the AppImage file to the /opt directory with the following command:

You should see the following dialog box. Just click on Yes.

Etcher should start as you can see in the screenshot below. 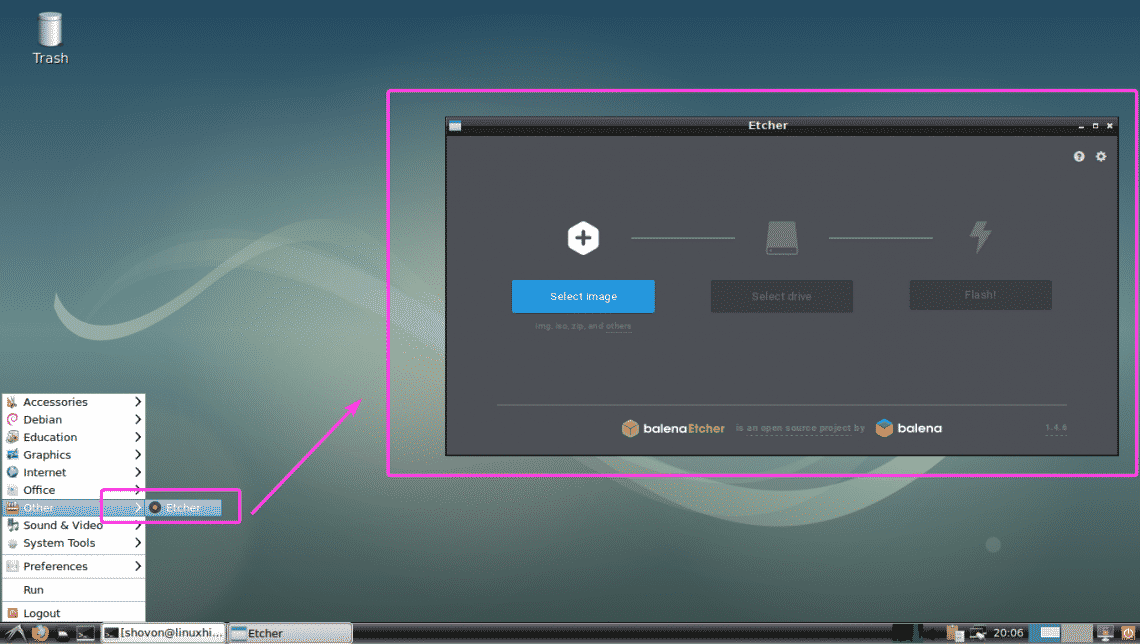 You can now flash microSD cards using Etcher for your Raspberry Pi.  First, open Etcher and click on Select image. 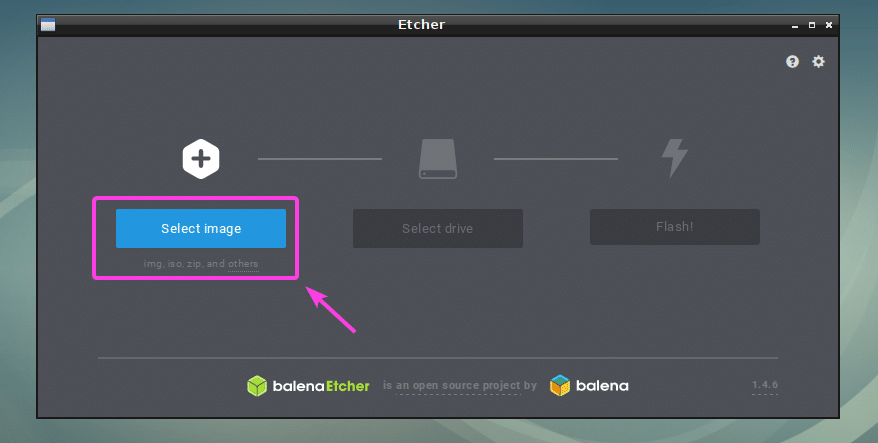 A file picker should be opened. Now, select the operating system image file that you want to flash your microSD card with and click on Open.

The image should be selected. 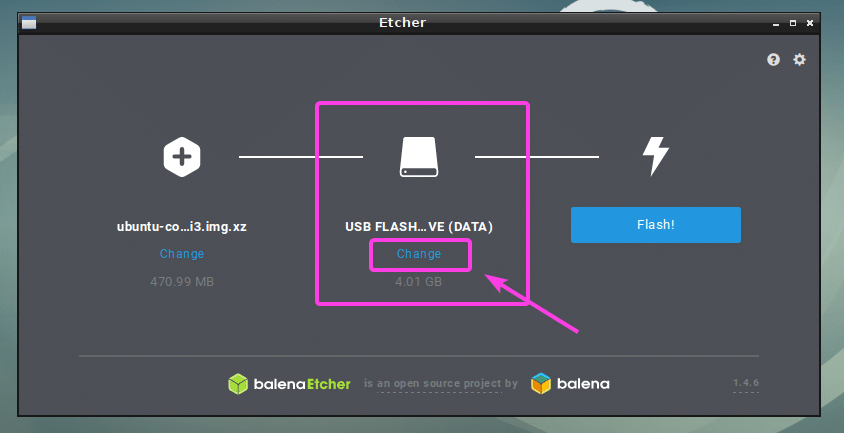 Now, select the one you want to flash using Etcher from the list and click on Continue.

NOTE: You can also flash multiple USB devices or microSD cards at the same time with Etcher. Just select the ones that you want to flash from the list and click on Continue. 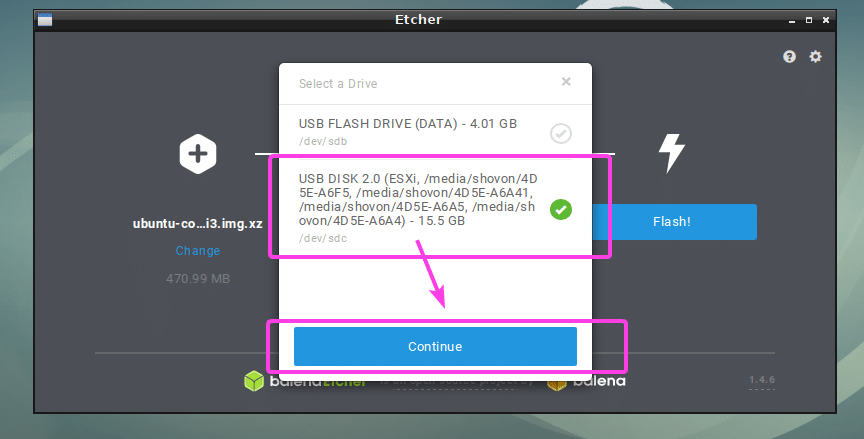 It should be selected as you can see in the screenshot below.

You can also change Etcher settings to control how Etcher will flash the microSD cards or USB storage devices as well. To do that, click on the gear icon as marked in the screenshot below.

The Etcher settings panel is very clear and easy to use. All you have to do is either check or uncheck the things you want and click on the Back button. Normally you don’t have to do anything here. The default settings are good. But if you uncheck Validate write on success, it will save you a lot of time. Because this option will check if everything is written on the microSD cards or USB storage devices correctly. That puts a lot of stress on your microSD cards or USB devices and takes a lot of time to complete. Unless you have a faulty microSD card or USB storage device, unchecking this option would do you no harm. It’s up to you to decide what you want. 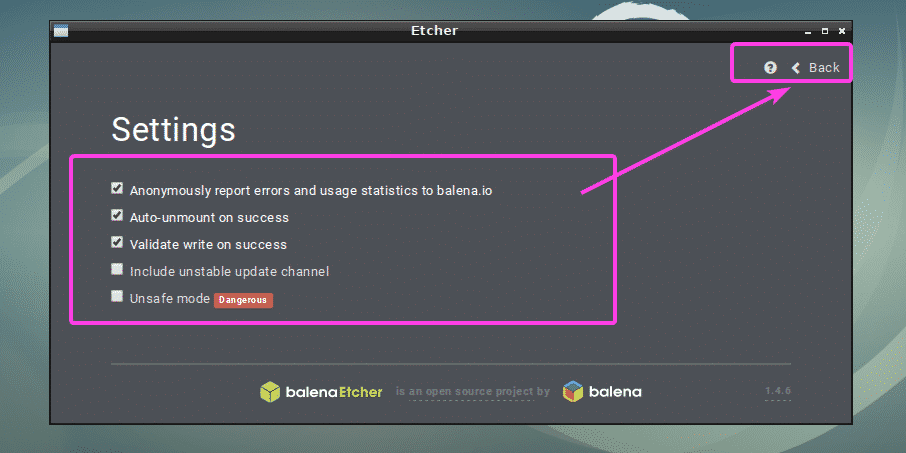 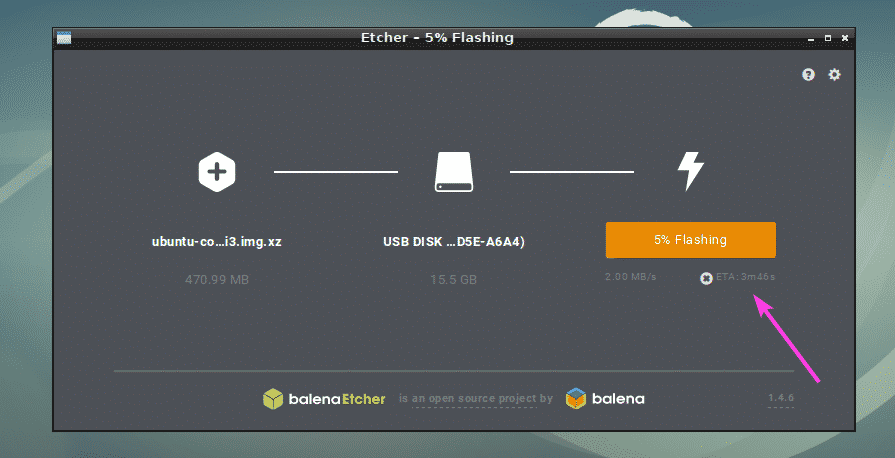 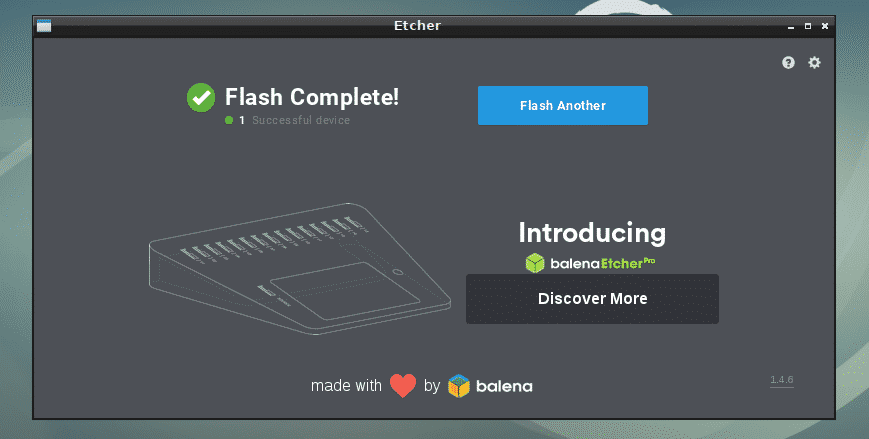 So that’s how you install and use Etcher on Linux (Ubuntu/Debian specifically). Thanks for reading this article.