This tutorial explains how to install Tesseract on Linux using both the Debian apt packages manager and the git repositories for other Linux distributions.

Tesseract is the free and probably the best OCR solution in the market. Since 2006 it has been sponsored by Google; previously, it was developed by Hewlett Packard in C and C++ between 1985 and 1998. The system can identify even handwriting; it can learn, increasing its accuracy, and is among the most developed and complete in the market.

If properly trained, it can beat commercial competitors like ABBY; if you are looking for a serious solution for OCR, Tesseract is the most accurate one, but don’t expect massive solutions: it uses a core per process, which means an 8 core processor (hyperthreading accepted) will be able to process 8 or 16 images simultaneously.

Tesseract is a great solution, but before thinking about it, you must know that the last Tesseract’s versions brought big improvements, some of which mean hard work. While training could last for hours or days, recent Tesseract’s versions training may be of days, weeks, or even months, especially if you are looking for a multilingual OCR solution.

Installing Tesseract on Debian and Ubuntu:

To install Tesseract on Debian or Ubuntu Linux distribution, use apt as shown in the screenshot below.

This will install Tesseract under /usr/share/tesseract-ocr/4.00/tessdata.

Note: For other Linux distributions, jump to Install Tesseract from Sources.

To install all available languages, run: 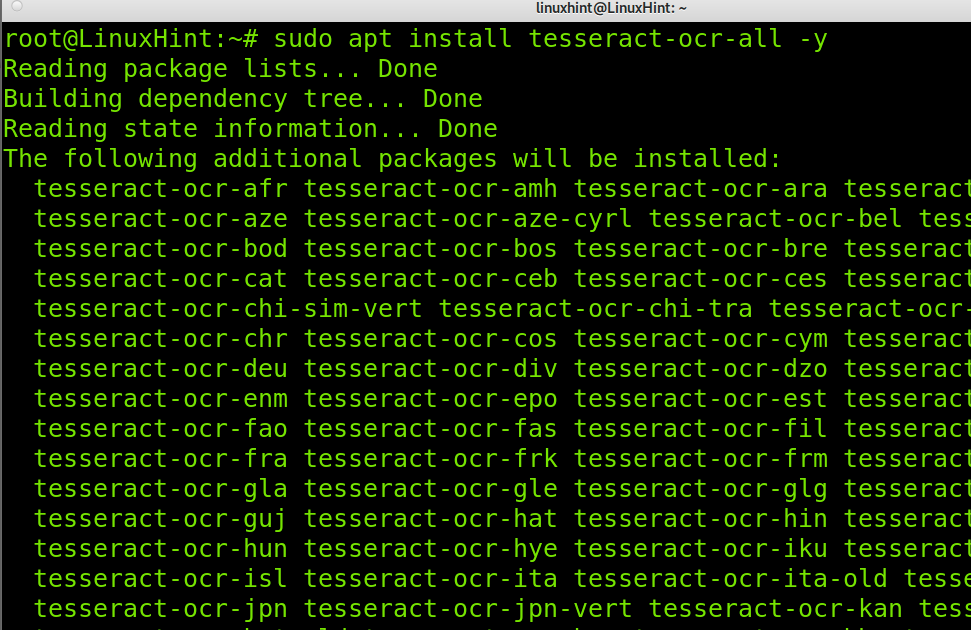 For Tesseract to work properly, we will need to use the “convert” command. This command is useful to convert between image formats and resize an image, blur, crop, despeckle, dither, draw on, flip, join, re-sample, and much more. This tool is provided by Imagemagick:

Tesseract will extract the text from the image.

When I worked with Tesseract, all we needed was to word count documents. Like with any other program, you can, and must, train it to understand the handwriting.

In advanced text editors, we can define some symbols which can be counted or not, if to count or not numbers, etc., the same with possibility is available on Tesseract.

Previously this article covered Tesseract’s training process, which evolved to a more manual process that deserves a dedicated article. Therefore this section only covers theoretical information on the training process and instructions to install Tesseract training tools and launch them.

According to Tesseract’s official wiki, we have 3 current options to train our OCR system:

Before continuing to Tesseract training instructions, we will need to install additional libraries:

After the installation, you’ll be able to see the training tools under /usr/share/tesseract-ocr/ as shown below.

Before starting to train a language, you need to provide Tesseract the content from which to learn.

For this, you need to create the langdata directory and eng subdirectory within Tesseract’s installation main directory. Then create the training text file as shown below.

Note: Remember to add content to the eng.training_text file.

Once the training text file was added, the syntax to start training a language is the following. The following command is to train the English language defined as “eng”.

This process may take a long time. Of course, this also depends on your training text files. This is the introduction to the Tesseract training process. We will publish a new article focused on the training process only.

In my case, I got an error when trying to train Tesseract. The Arial Bold font was missing. I solved this by running the command below.

Install Tesseract from Sources on Linux:

On different Linux distributions, you can get Tesseract using git, as shown below.

Once cloned, go into the tesseract directory by running using cd.

Then run the autogen.sh script as shown below.

Then run make install, as shown in the screenshot below. 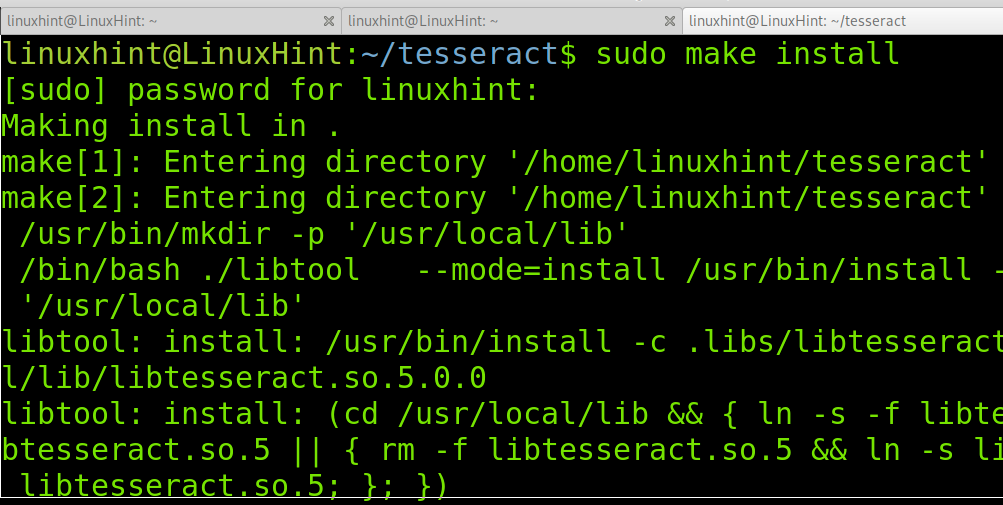 Execute ldconfig as shown below.

Now you can follow the instructions to get started with the training process.

As you can see, installing Tesseract on Linux is pretty easy, especially on Debian-based Linux distributions. When I used Tesseract, we managed thousands of potential customers uploading handwritten content, images with text, etc. We used 48 core servers, with DatabaseByDesign and then with AWS; we never had a resource problem.

We had an uploader that discriminated between text files like Microsoft Office or Open Office files and images or scanned documents. The uploader determined whatever the OCR or PHP scripts would process an order in the field of text recognition.

In my experience, Tesseract is the best OCR solution available in the market, and it’s open-source.

Thank you for reading this tutorial explaining how to install and configure Tesseract OCR on Linux. Keep following us for additional Linux tips and tutorials.