We’ll look at how to install Scipy in Python on Linux in this article. We’ll provide various scipy installation techniques. We’ll go over how to utilize the pip command and the package manager command in particular. For your benefit, examples and explanations will be used to discuss all the information. For your convenience, we’ll also attach the screenshots. But first, let’s examine what scipy is and why the Python programming language needs it.

What is SciPy in Python?

An open source set of tools called SciPy, which is pronounced ‘Sigh Pie,’ is mostly employed in the fields of engineering, mathematics, and scientific computing. It is based on the Python Numpy extension and offers a ton of helpful modules for signal and image processing, integration, optimization, linear algebra, Fourier transforms, statistics, and many other topics.

SciPy can easily be installed on all popular operating systems based on Linux. Using the pip package manager, we will walk you through the process of installing SciPy on a Linux virtual private server in this tutorial. In the section that follows, pip will be covered in more detail.

SciPy is neatly organized into sub-packages that address many areas of scientific computing. Cluster, constants, integrate, io, linalg, signal, sparse, stats, etc. are a few of these.

What is NumPy in Python?

An open-source library for the Python programming language is called NumPy (Numerical Python). It is employed in array manipulation and scientific computing. In addition to a multidimensional array object, it offers high-level array manipulation features.

Built on linear Algebra is NumPy. It involves executing Mathematical operations on matrices and vectors. Basic operations like average, minimum, maximum, standard deviation, variance, and many more are supported by NumPy.

The package manager for Python by default is called pip. Additional packages that are not by default included in the standard library pf Python are also available for installation.

How to Install Scipy on Linux?

SciPy may typically be installed on a Linux computer using one of two simple techniques. The first is as straightforward as using the built-in package management that comes with the installation of Linux. The second is as complex as using pip, the python package manager. To install SciPy, use either method’s single command.

The Python package manager which Pip used to install as well as update packages. The standard library of Python comes with several built-in functions.

Statsmodel and other data science libraries like Scikit-Learn are NOT a part of the Python standard library. They can be set up using the command line and pip, the default package manager for Python.

This approach explains how to install Scipy using the pip command. Launch the command prompt terminal on your PC. You can launch Command Prompt on Windows, Terminal on Mac, or the Linux terminal that comes with your Linux distribution.

Run ‘python -m pip install -U pip’ after typing it. By using this command, you may ensure that your system has the most recent pip files installed for use in managing packages.

At the command prompt, enter and execute ‘pip install scipy.’ The main SciPy packages will be installed on your computer using the Python Package index. The commands ‘pip install numpy’ and ‘pip install matplotlib’ can be used to install other core packages, such as Numpy and Matplotlib.

Below is the result of the executed ‘pip install scipy’ command.

The simple installation instructions for Python-Scipy on Ubuntu Server are available here. Try clicking the Copy button to capture the command and drop it into your command prompt terminal if you want to utilize the built-in APT package manager.

For quick, step-by-step guidance on SSH commands, see the details below. Copy/Paste is recommended to prevent typos and unintentional package installation.

Run the update command to update package repositories and obtain the most recent package information.

Issue the install command with the -y parameter to install the packages and dependencies.

Because the libraries were installed in a virtual environment, starting now, if any of the modules for NumPy, SciPy, Matplotlib, etc., were not successfully installed, you would receive a ModuleNotFoundError error. We may evaluate ScipPy and Matplotlib by creating the little test program listed below.

You can see in the code that the first two modules added are scipy and matplotlib. With features to control line styles, font attributes, formatting axes, and other features, it offers a module named pyplot that makes things simple for plotting. Let’s examine each line of the code in detail.

The import scipy command was used to import the scipy module in the first line of code. The matplotlib library is subsequently loaded as plt. The arrange() method was then used to construct a variable in which the graph specification was given. One of the most used Python functions is the arrange() function. After creating values with equal spacing, the arrange() method returns the reference to those values.

In the final line of the code, we have displayed the plot with the show() method.

Here is the output screen where the graph is displayed. This demonstrates your system’s installation and successful operation of the SciPy module. 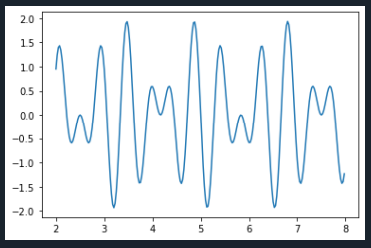 How to install Scipy was covered in this post. There are several features included in the SciPy installation. The package has a code return that can be used to access the functions found in its sub-packages. Installation of this package is necessary to use Python’s features. Due to the package’s open-source nature, there is enormous growth potential. There are several installation methods available for your convenience. Depending on our demands, we can use it to the fullest.