This tutorial explains how to install PIP for Python 3 and Python 2 on Debian 11 and other Debian-based Linux distributions, such as Ubuntu.

PIP (Pip Installs Packages) is a Python written packages manager used to install software from repositories. If you don’t know PIP, you can think of it as a similar tool to the Debian apt command. Basically, the syntax to install packages using the PIP packages manager is pip install <package>.

This tutorial covers PIP installation, both for Python 3 and Python 2, despite Python 2 isn’t supported on default by Debian repositories. This article also explains how to get both PIP versions with just a command. Additionally, I added instructions to keep PIP up-to-date and to use it to install the software.

To begin, update your package repositories by running the apt command, followed by the update option as shown below:

You can install Python (3) also using the apt command followed by the install option as shown below: 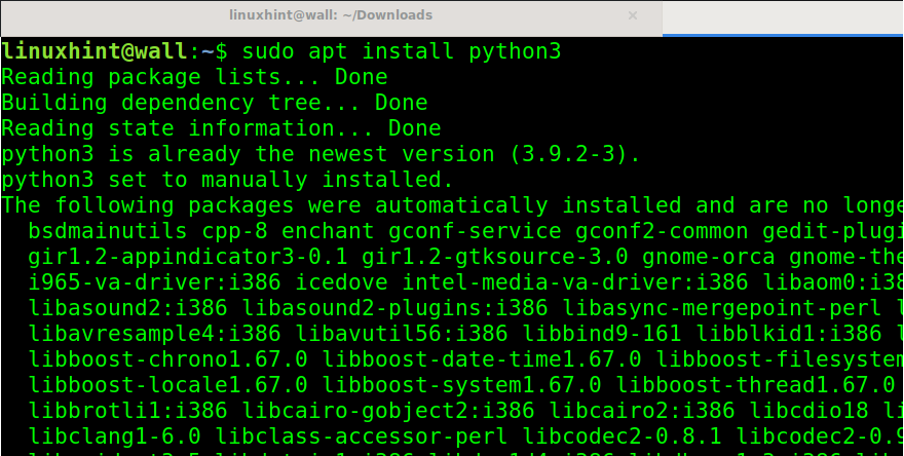 To check your Python 3 version, you can run the command below:

Then, install PIP3 by running the following command:

To check your PIP version, run the following command:

As you can see, PIP for Python 3 is installed.

As discussed, while Python 2 is still available for Debian 11, it doesn’t support PIP2 in the packages manager. However, you can get it installed by following the steps explained below:

Use the apt command to install the python2 package as shown below:

Once Python 2 is installed, download and execute the pip installer for Python 2 by running the following command:

You can check your Python 2 version by executing the command below:

To check both Python 2 and pip versions run the following command:

As you can see, PIP for Python 2 is installed.

You can use the command shown in the following screenshot to keep PIP up-to-date:

Now, PIP and its components are up to date.

As you can see, the package was properly installed.

You can find available projects to download at https://pypi.org.

In this case, the software was already up-to-date.

To remove packages using PIP, use the following syntax. When asked for confirmation, press Y.

To remove the translator package, run the following command. When asked for confirmation, press Y.

And as you can see in the screenshot below, the package was properly removed:

Thank you for reading this tutorial explaining how to install PIP on Debian 11 Bullseye. As you can see, installing both PIP for Python 3 and Python 2 is pretty easy. Any Linux-level user can get it done by following a few steps explained in this article.

Despite this tutorial showing PIP for Python 2 installation, it isn’t recommended. Instead, use Python 3. Also, remember to keep PIP and its components up-to-date using the commands explained for that purpose.

Thank you again for learning from Linux Hint. Keep following us for additional tips and tutorials.