OpenSSL is an open-source cryptography library useful to implement TLS and SSL protocols. TLS and SSL implementation is used to provide confidence on the sender of a packet and the packet integrity. It is considered mandatory on websites, especially websites where users store sensitive information. Search engines like Google prioritize secured websites in search results.

Red Hat Linux users may find it useful to install OpenSSL from source to add features left out since Red Hat replaced OpenSSL with a pre-installed limited version, according to the OpenSSL website.

How to install OpenSSL from Source

Before starting, make sure you remove the old OpenSSL version by running the following command in your terminal: 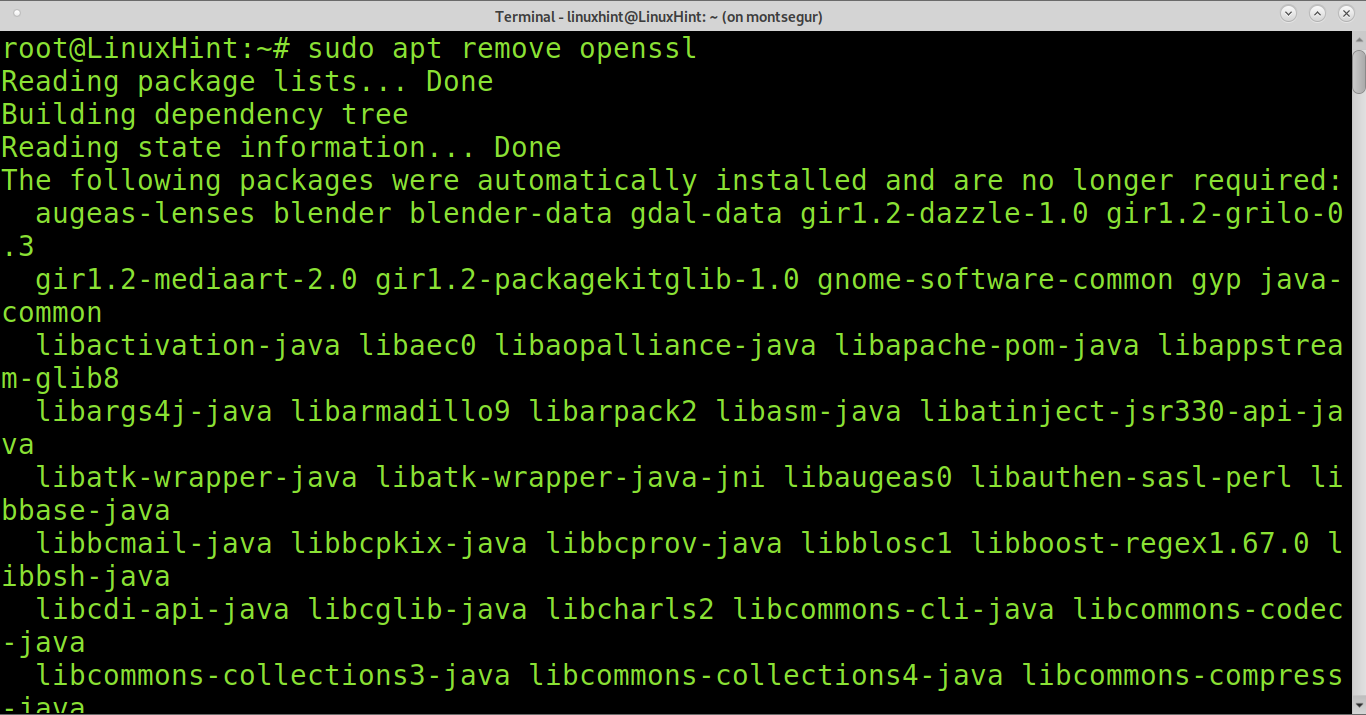 You can download OpenSSL sources from https://www.openssl.org/source/. Make sure you download the correct version. For demonstration, I will download the current version (3) using wget as shown in the example below: 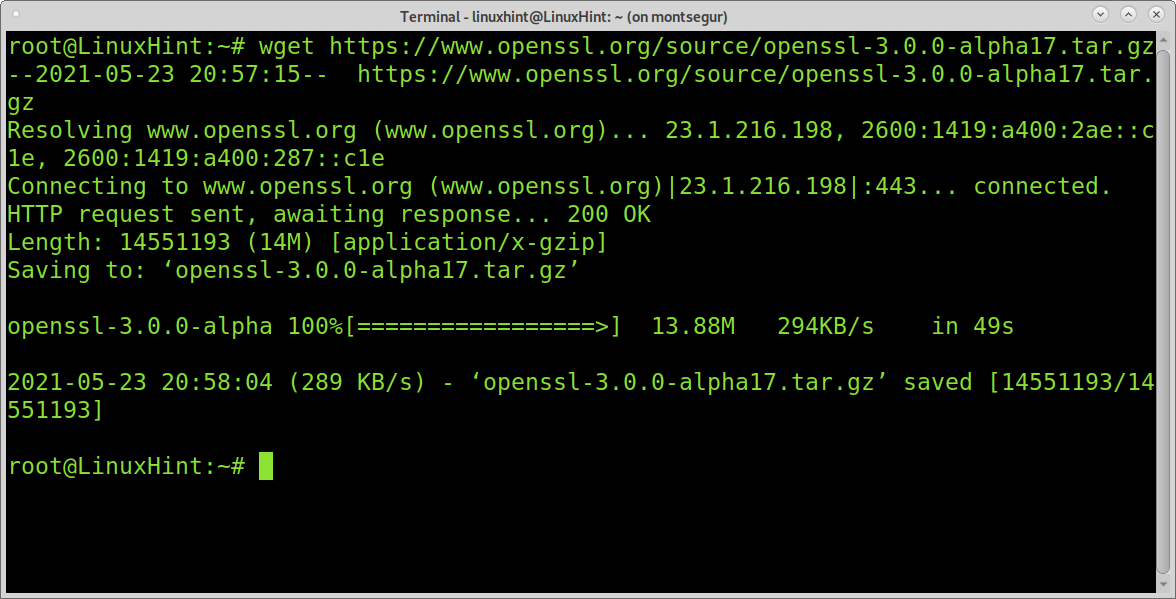 Extract the downloaded tar.gz by running the following command: 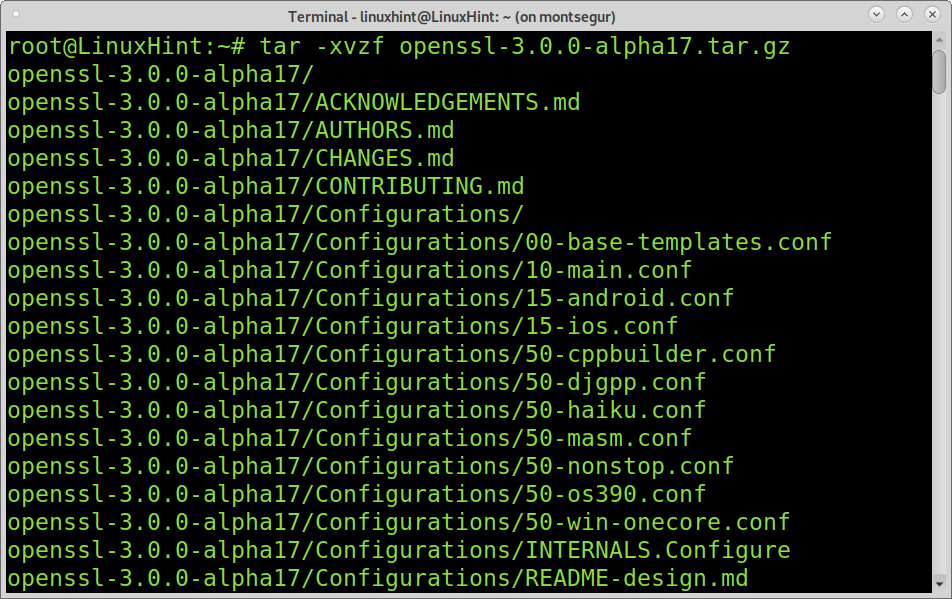 Enter the extracted directory with the cd (Change directory) command and give the configuration file execution permissions as shown in the screenshot below: 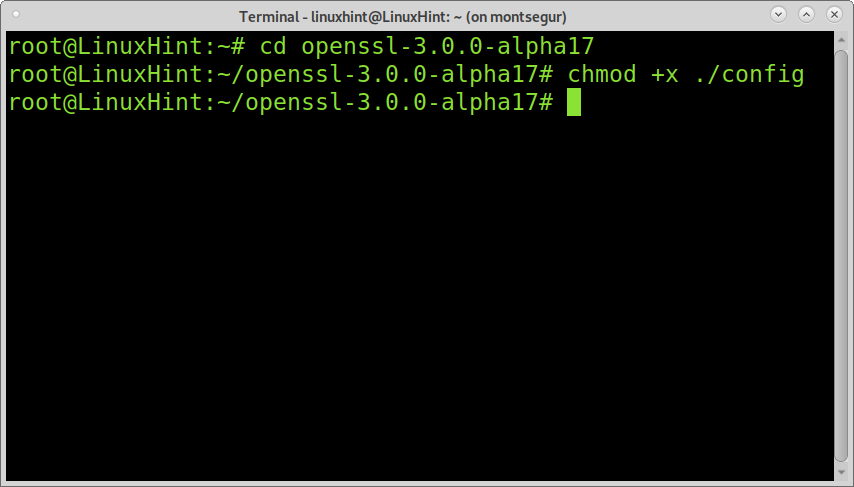 Run the configuration script as shown below (Pay attention to the capital c). 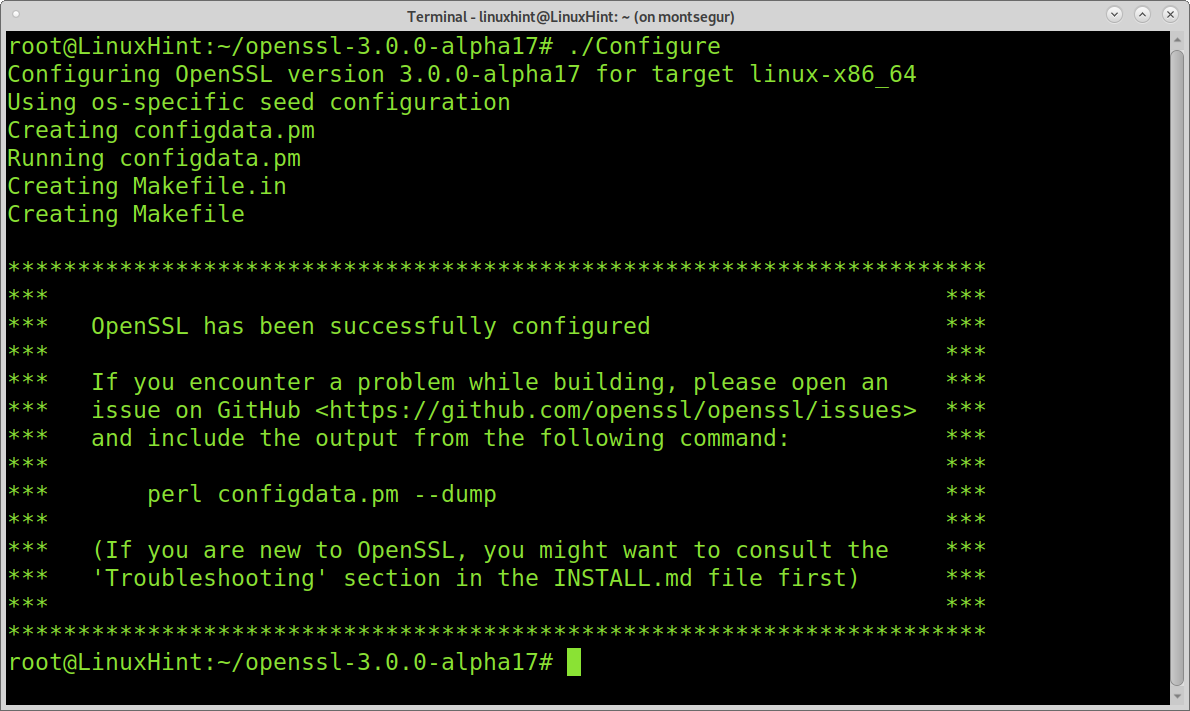 Now you can start compiling Openssl using the script make: 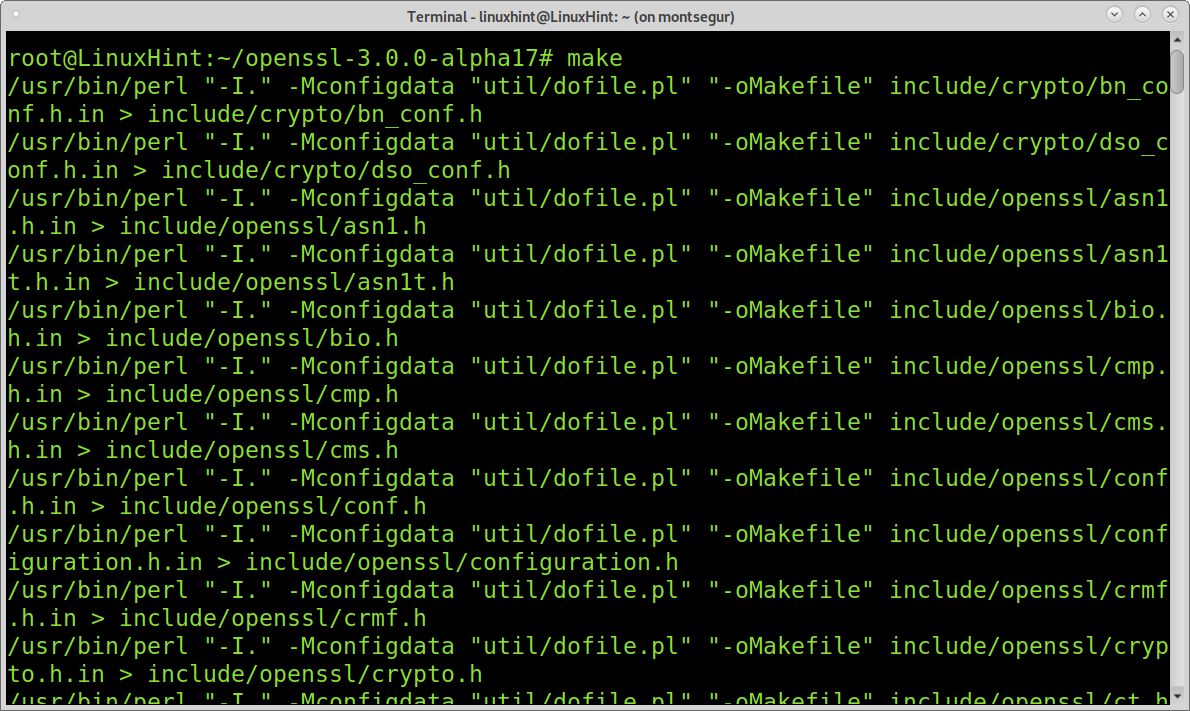 Run make test as shown below: 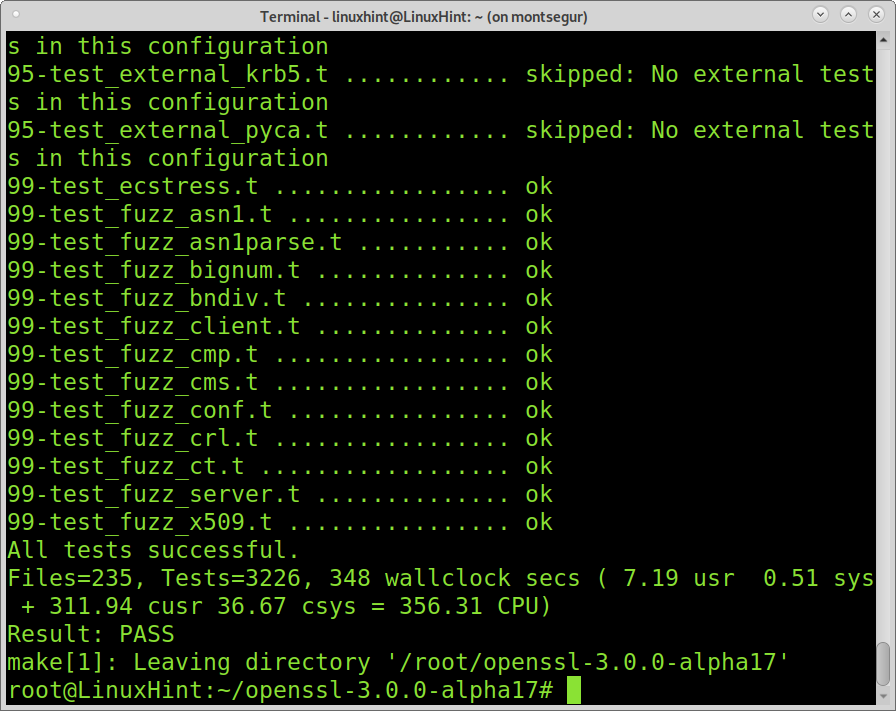 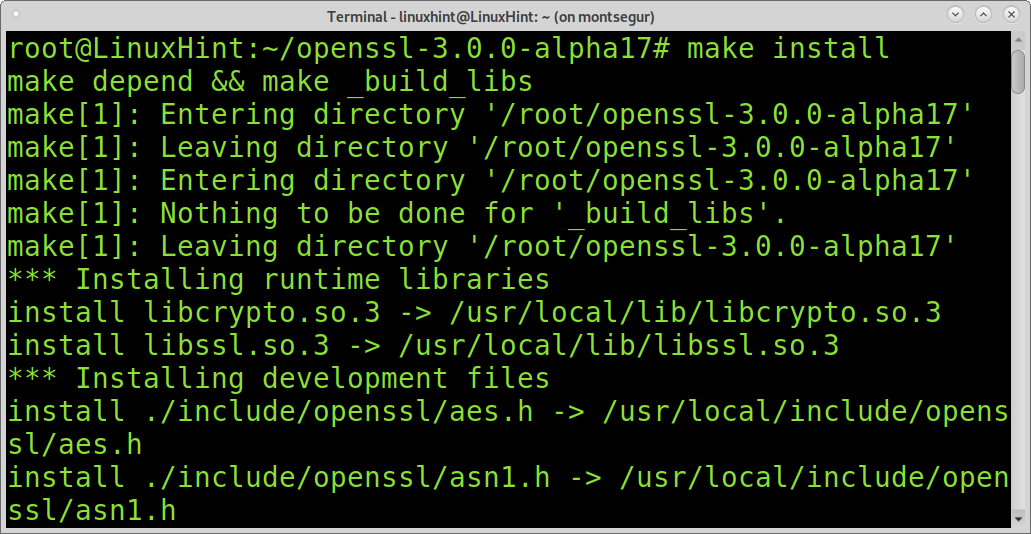 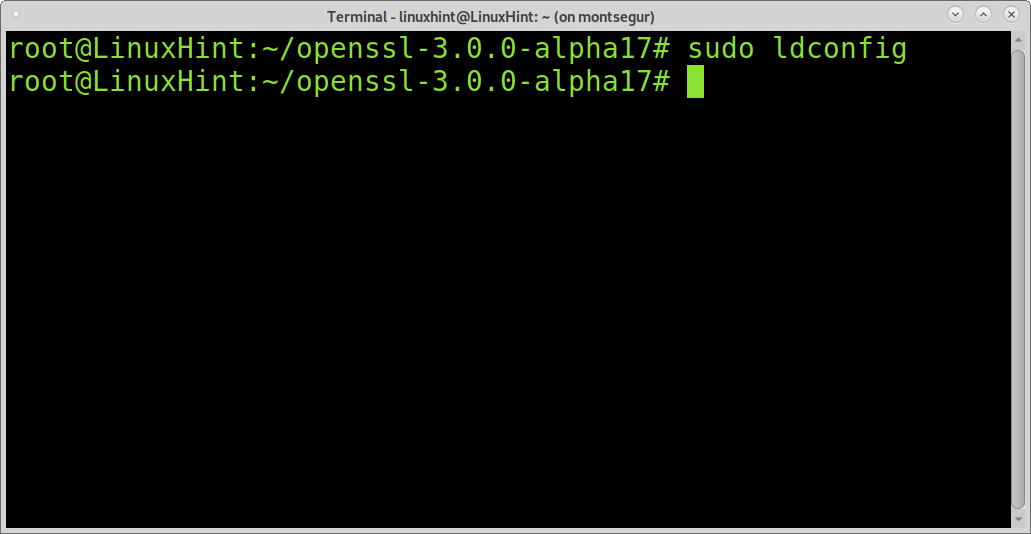 In my case, it was installed under /usr/local/bin/openssl. So, I linked it to /usr/bin. If that’s your case too, run a similar command according to your situation. Otherwise, you can check if OpenSSL is properly installed by executing openssl version as shown in the screenshot below.

As you can see, OpenSSL was correctly installed from source.

How to Install OpenSSL in Debian-based Linux Distributions

Installing OpenSSL in Debian-based Linux distributions is easier using apt as shown below:

OpenSSL is licensed under OpenSSL (Apache License 1.0) and SSLeay permissive licenses. Anyone can use or redistribute OpenSSL both for personal and commercial use. OpenSSL licensing is not compatible with GNU GPL license. This fact encouraged the development of GnuTLS.

It was forked from OpenSSL aiming to clean the code and improve security. Known for being more secure, some OpenSSL vulnerabilities didn’t affect LibreSSL. LibreSSL was developed by an OpenBSD developer and replaced OpenSSL for that OS which was considered the most secure.

Another open-source option. It is currently the largest certificate issuer in the world. It is the easiest alternative to install and configure with a process fully automated.

GnuTLS is used by software like GNOME, OpenLDAP, CenterIM, Exim, Mutt, Slrn, Lynx, CUPS, etc. This cryptography library was developed by the Free Software Foundation, and also allows the implementation of SSL, TLS and DTLS. It was developed because of the incompatibility of OpenSSL with GNU GPL licenses.

Installing OpenSSL from source is a 10 minute easy task. Any inexperienced user can do it by following the instructions above. However, benefits range from security to the ability to run TLS/SSL dependent applications like OAuth. Securing a website with TLS/SSL will improve the site before search engines which prioritize secured websites (https) over insecure sites (http) in search results.