In this article, I will show you how to install NVIDIA drivers on Debian 11. So, let’s get started.

Finding Out Whether You Have NVIDIA GPU Installed:

You can check whether your computer has an NVIDIA GPU installed or not with the following command:

As you can see, I have an NVIDIA GeForce GTX 1050 Ti GPU installed on my computer. You may have a different NVIDIA GPU installed.

To enable the contrib package repository, run the following command:

To enable the non-free package repository, run the following command:

To update the APT package database, run the following command:

The APT package database should be updated.

NVIDIA drivers and all the required packages will be downloaded from the internet. It will take a while to complete.

Once all the packages are downloaded, the APT package manager will install them one by one. It will take a while to complete.

Once you see the following prompt, navigate to <Ok> and press <Enter>.

The installation should continue.

At this point, NVIDIA drivers and all the required dependencies should be installed.

For the changes to take effect, reboot your computer with the following command:

If the NVIDIA drivers are installed correctly, the NVIDIA X Server Settings app should run without errors and show you information related to your NVIDIA GPU, as you can see in the screenshot below. 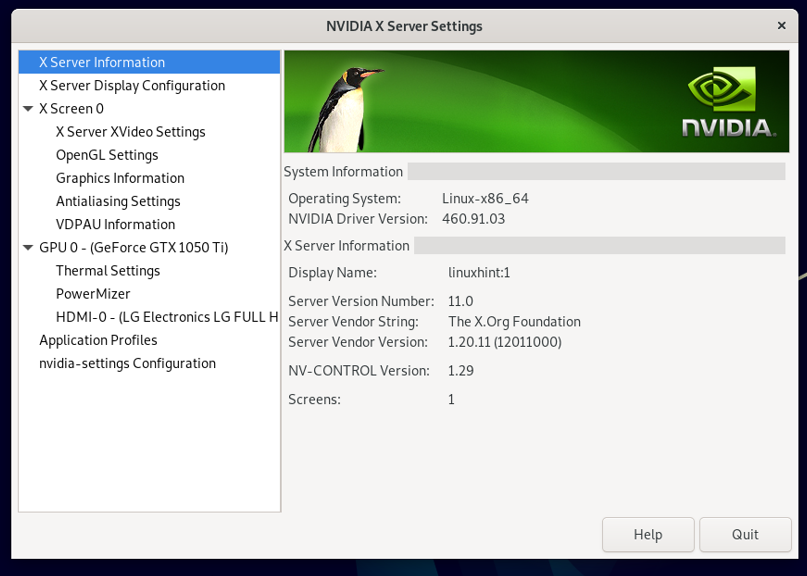 NVIDIA driver kernel modules are loaded correctly, as you can see in the screenshot below.

In this article, I have shown you how to install NVIDIA GPU drivers on Debian 11 and check that it’s working correctly.