Nginx (pronounced “engine X”) is a fast web and reverse proxy server. It works as a standalone web server as well as a proxy to reduce the load on back-end HTTP or mail servers. Nginx-extras is the most popular feature-rich module of the Nginx package. Like other modules Nginx-Full and Light, it too can be found in the Universe repository. It includes all of the modules of Nginx-full, as well as new modules (such as the Perl module) including several third-party modules aimed to expand the Nginx web server’s capabilities even further.

The Nginx extras contain a massive library of dynamic NGINX module RPM packages. It enables you to extend NGINX’s base capabilities from a simple webserver to a modern application stack by incorporating the following techniques:

We will demonstrate in this article how to install the Nginx extra package on the Ubuntu system. We will do all the installation on Ubuntu 20.04 LTS distribution.

Nginx-extra module can be easily installed on Ubuntu by using the following steps:

It is recommended that before installing any new package on Ubuntu, you update first the apt packages repository by using the following command:

Install the Nginx-extra module by running the following command:

After running the above command, a list of packages will be display on the terminal that are installed already on your system. 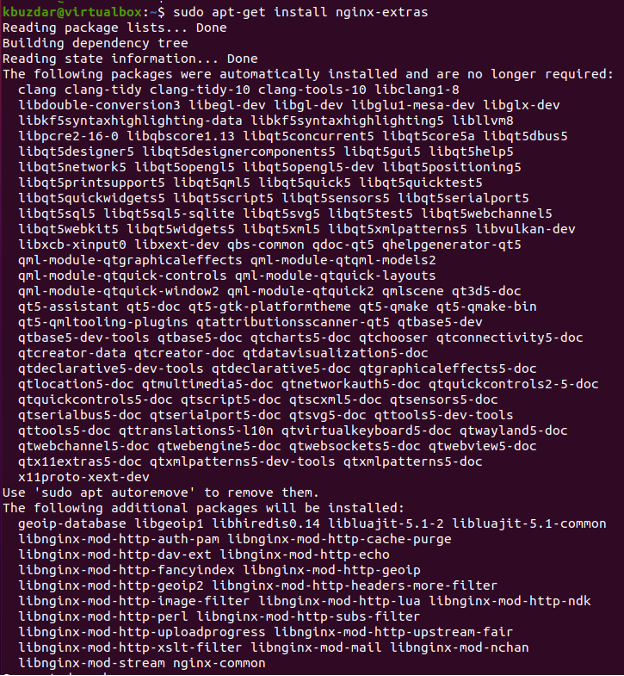 You will be prompted to install some new Nginx packages now. Confirm the installation by pressing ‘y’ and then hit ‘Enter’.

Once the all packages are installed on your system, display the installed Nginx-extras module details by executing the following command:

The following output will show on the terminal screen: 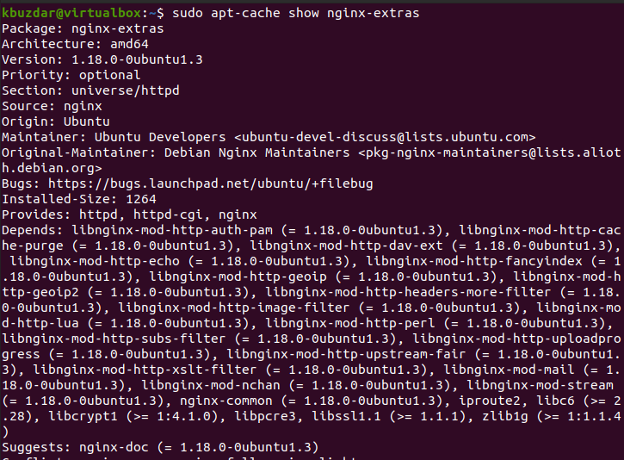 In most cases, you need to uninstall packages from your system. So, if you want to uninstall Nginx-extras from Ubuntu, use the following commands:

That is on installation of Nginx-extras. Nginx-extras contains the largest pre-build dynamic Nginx packages on the internet that are available in a single repository. If you want to explore more about Nginx, you can see the Nginx packages by visiting its official Nginx website.