Git is a higher-level Graphical User Interface (GUI) application widely used in Windows environments. This utility helps users to track projects efficiently and quickly create and clone repositories. By default, Git has a “Git Bash” command line, or bash scripting shell that is used to execute the Git commands on Windows.

This article will provide the easiest process of Git installation on Windows.

How to Install Git on Windows?

To install Git on your Windows system, follow the below-given instructions. 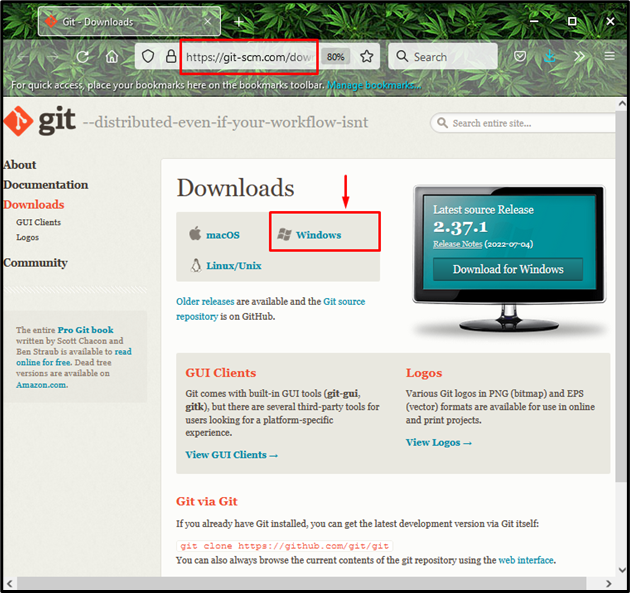 The installer file of Git will start downloading:

Step 2: Run Git Installer
After downloading the installer file, open up the “Downloads” directory and double-click on the “Git Installer” file: 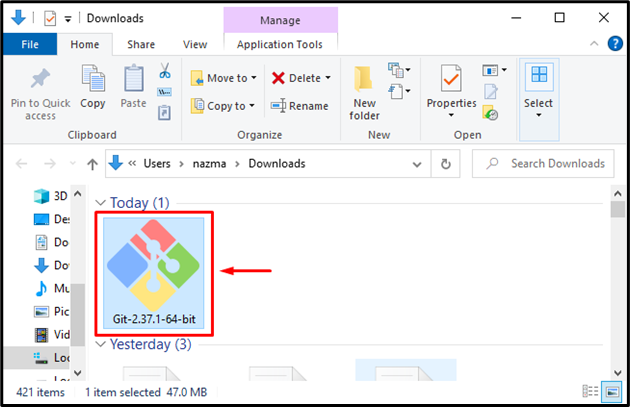 Click on the “Run” button to allow your system to execute the file: 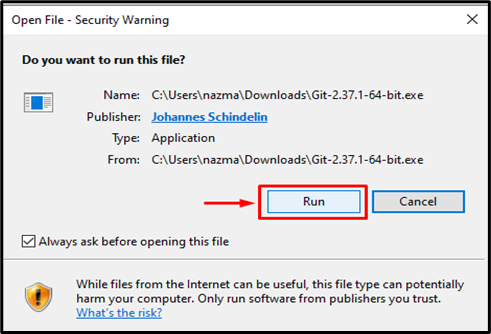 Read the “General Public License” and click on the “Next” button: 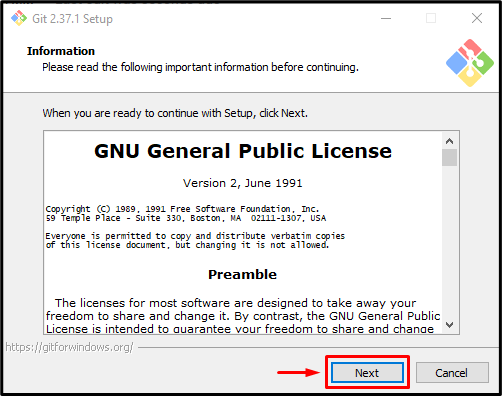 Click on the “Browse…” button to specify the desired folder for Git installation and click on the “Next” button: 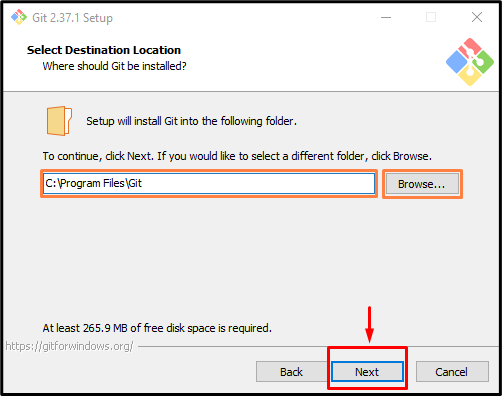 Now, mark the Git components you want to install. After that, click on the “Next” button: 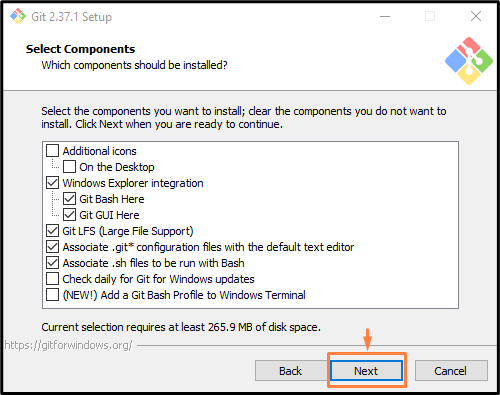 Browse the “Start Menu” folder in which the application shortcut will be placed and press the “Next” button to go ahead. For instance, we have selected by default the “Git” folder: 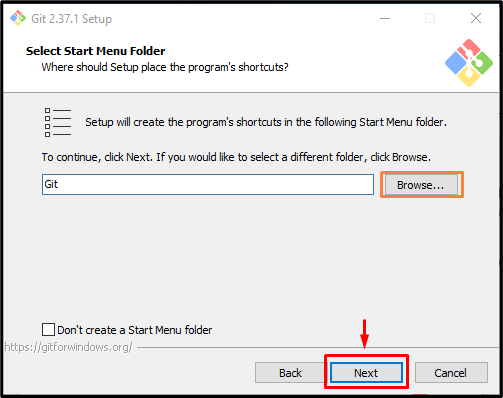 Step 7: Choose Text Editor
Choose the text editor you want to use by default with “Git”, specify it in the field and move ahead by clicking on the “Next” button. In our case, we have selected “Notepad++” as the Git default editor: 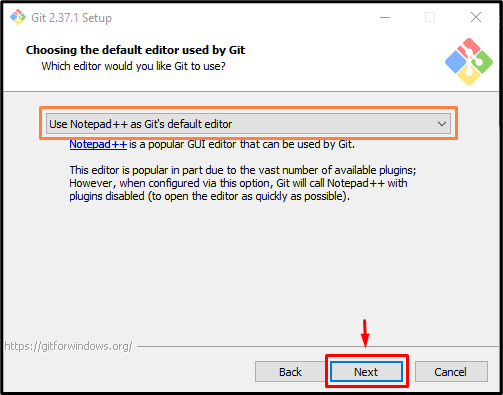 Step 8: Specify Initial Branch
Specify the name for your initial branch or select the “Let Git decide” option, which indicates that Git will use the default branch name “master”, and press the “Next” button: 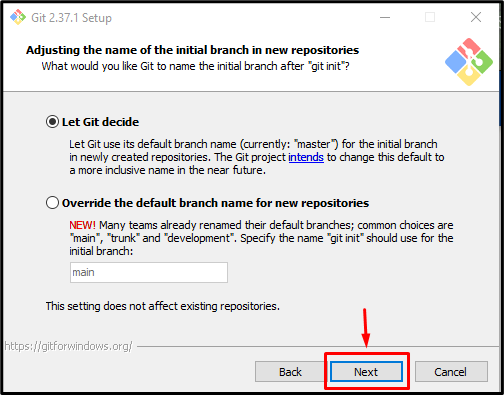 Step 9: Set PATH Environment
From the next screen, you can change the PATH environment according to your preferences:

In our case, we have selected the recommended option and hit the “Next” button: 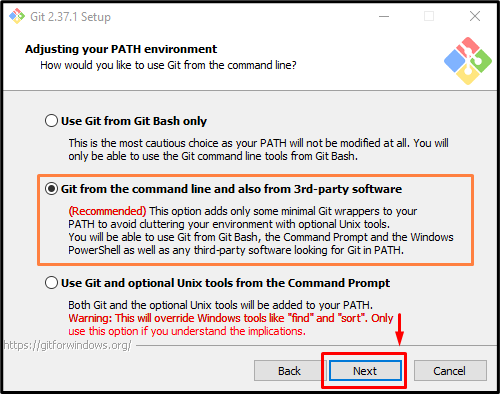 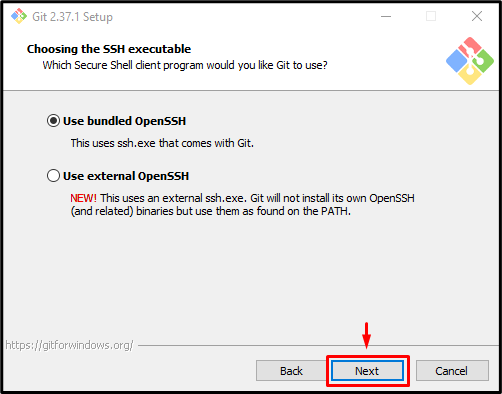 Step 11: Select HTTPs Transport Backend
Mark the default “Use the OpenSSL library” option to validate server certificates using the “ca-bundle.crt” file and press the “Next” button: 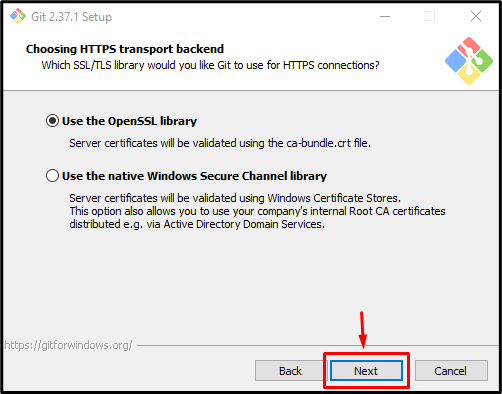 Select the default “Server Line Ending” option for treating the line endings in text files and move ahead by clicking on the “Next” button: 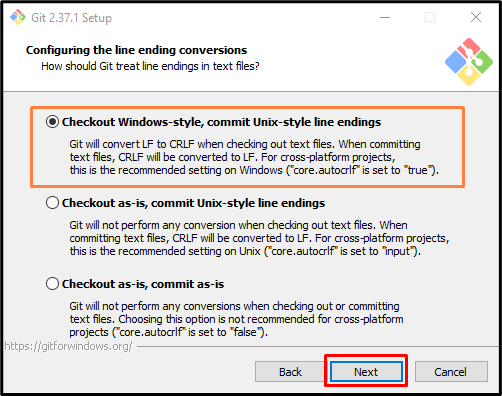 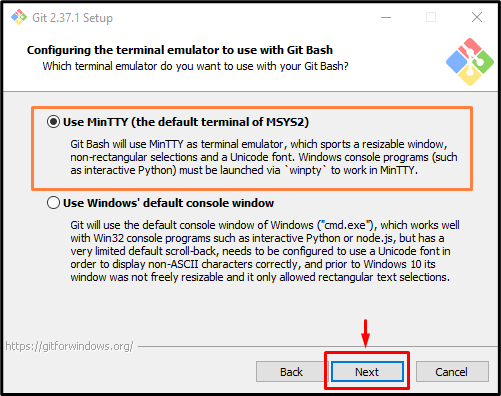 Select the “Default” behavior of “git pull” and click on “Next”: 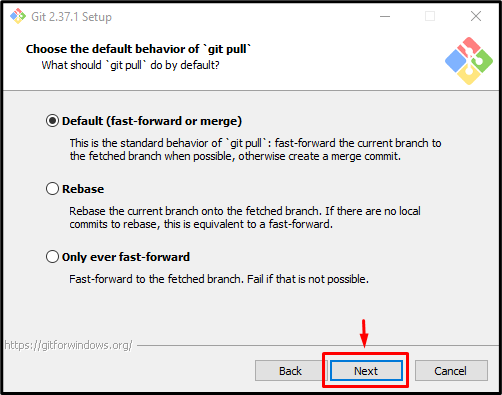 The “Credential Manager” is utilized for fetching or saving the credential in Git. The default option is the most stable to go, select it and click on “Next”: 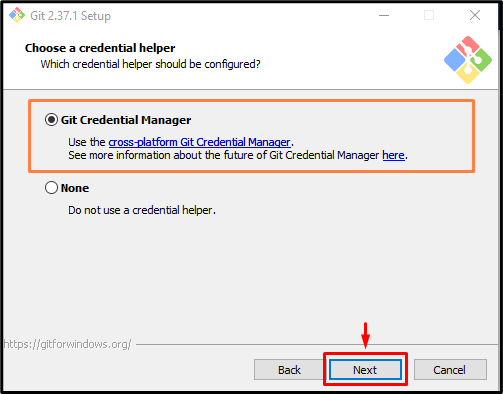 Step 15: Configure Additional Options
Decide which extra options you want to enable, mark them, and press “Next”: 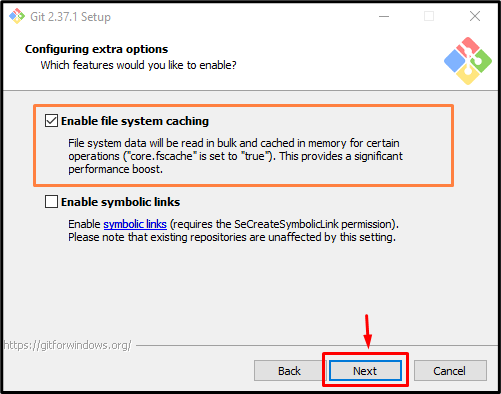 Step 16: Install Git on Windows
Click on the “Install” button to start the Git installation process: 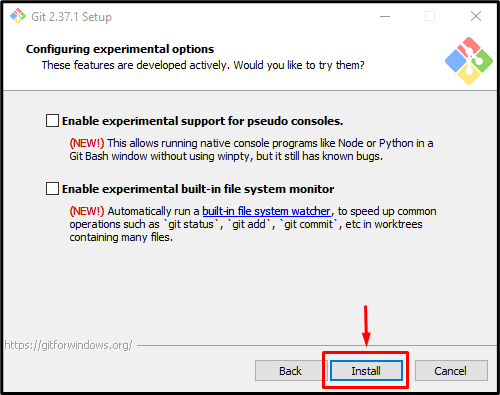 Wait for a few minutes while setup installs Git on your Windows system: 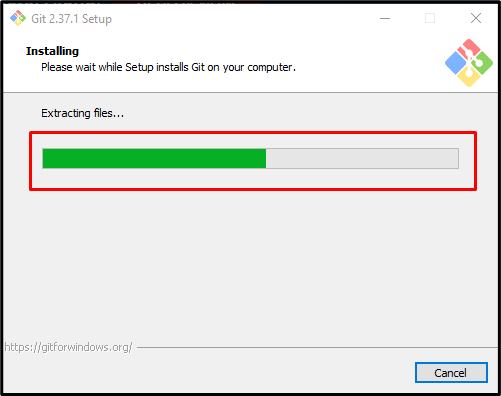 Once the installation process of Git is completed, click on the “Finish” button: 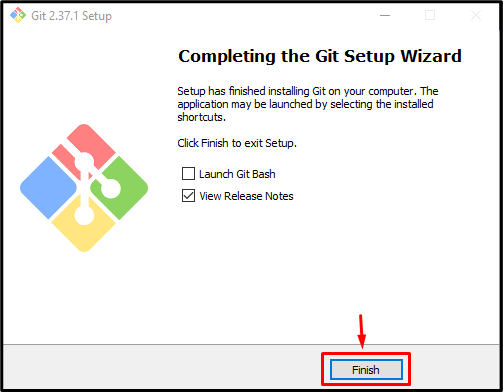 The above-given output shows that “Git” is successfully installed in our Windows system.

What are the modes of Git on Windows?

Let’s check out the method to launch both utilities one by one!

How to Launch Git Bash on Windows?

Search for the “Git Bash” command line using the “Windows Startup” menu and open it: 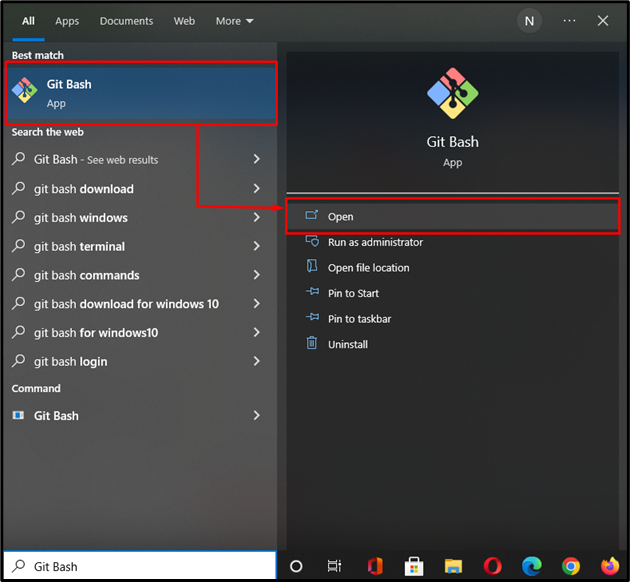 The following “Git Bash” command line interface will now appear on your screen:

How to Launch Git GUI on Windows?

Launch the “Git GUI” a graphical user interface with the help of the “Startup” menu: 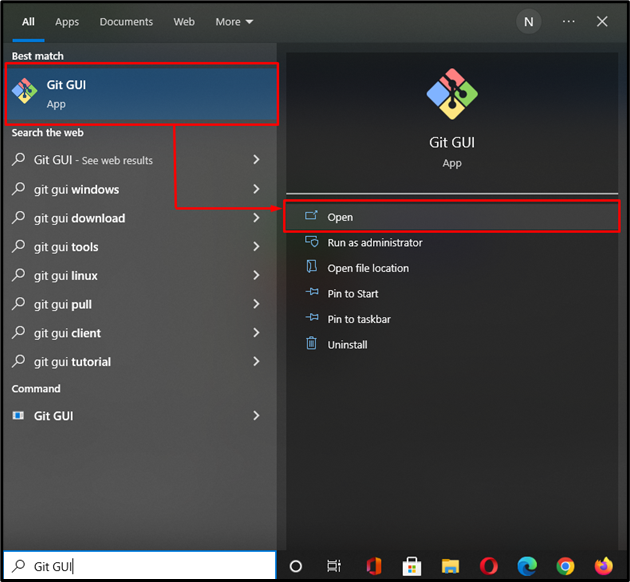 The “Git GUI” will appear on your screen and is all ready to use: 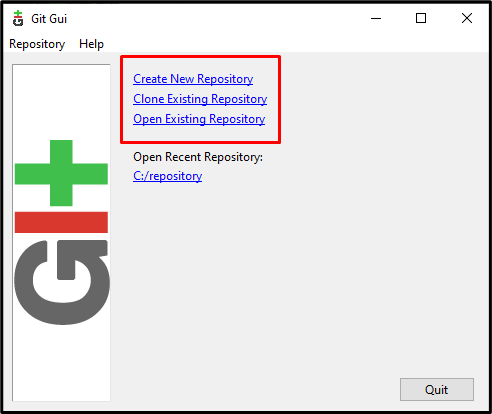 We have compiled the easiest method of installing Git on Windows.

To install Git on Windows, first, visit the Git official website, and download the installer file for Windows. Then, open the downloads folder, and execute the “Git installer”. Perform all operations required for setup and click on the “Install” button. After that, launch the “Git Bash” command line with the help of the “Windows Start” menu and execute the “$ git –version” command to verify the Git installation. In this article, we have demonstrated the installation procedure of Git on Windows.