Syntactically Awesome Stylesheet (Sass), an extension of CSS that pre-processes CSS and works well with all of its versions and enhances the capability of the basic language. It saves a lot of time and effort by preventing its users from using redundant CSS values. Moreover, you can download and use Sass for free. In this write-up, we will tell you how to install and begin with Sass.

How to install and begin with Sass

The installation procedure of Sass can be carried out in various ways such as using some open-source applications, installing Sass using the command line, installing it on your desired code editors such as VS Code, Sublime, Atom, etc, or installing it anywhere from the Github repository.

There are numerous applications available (paid and free) that will help you install and run Sass in no time for Windows, Mac OS, and Linux. Some applications are listed below.

Note: There is no need to use the paid applications for the initial development phases because the free ones are fully functional.

Below we have discussed how you can install Sass using the command line on various platforms.

You can with great ease install Sass on any platform such as Mac Os, Linux, Windows by downloading its package that is relevant to the platform you use, from Github repository. Once downloaded include the package in your PATH. Such an installation does not require any dependencies, therefore, it is the easiest approach.

If you are a Node.js user then you can use the following npm command and install the package of Sass.

If you have a Windows operating system and also have a chocolatey package manager installed then you use the following command to install Dart Sass.

Mac OS X and Linux users can install the Sass package using the Homebrew package manager through the following command.

Visit the Live Sass Compiler and press install to download the extension.

As soon as you press install button, the extension will open in your VS code editor.

Now press the highlighted install button and the extension will be installed in the code editor.

Now you can open the .scss file and start writing your stylesheet. Once you do this you will notice an option saying “watch Sass” in the editor. 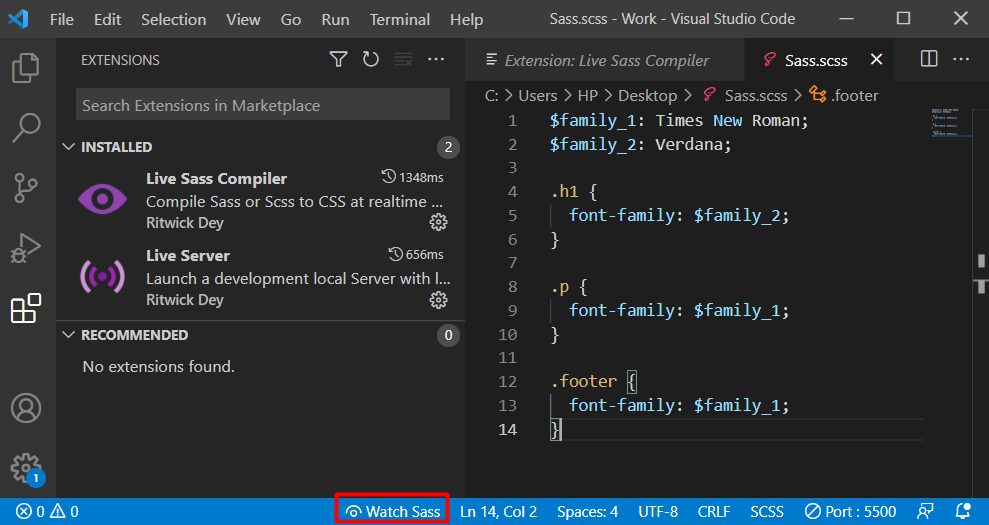 Click this option to generate the CSS map file, and the CSS file automatically. Later on, you can link this CSS file to your HTML document. 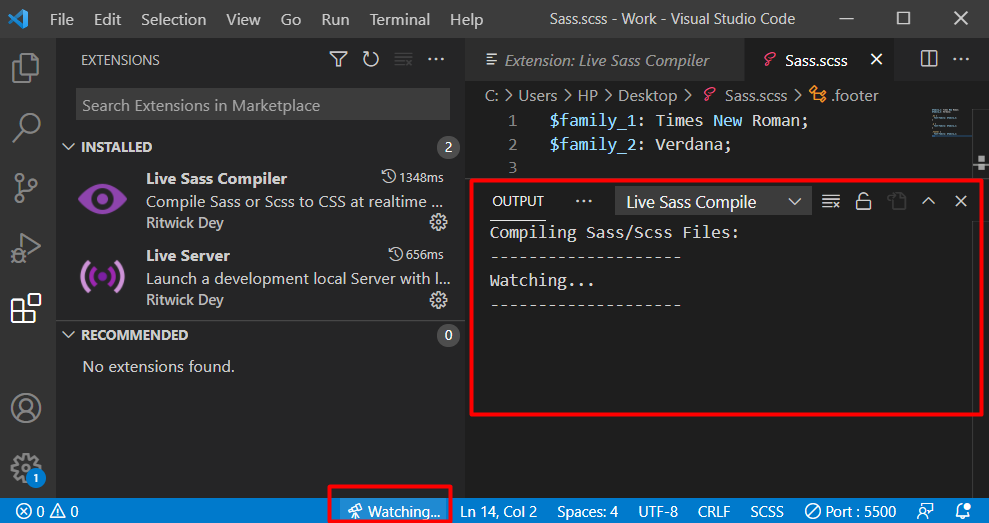 Follow the above-mentioned steps to easily install Sass on your VS code editor.

You can install and get started with Sass using various ways such as using some open-source applications, installing it using the command line, installing it on your desired code editors such as VS Code, Sublime, Atom, etc, or installing it anywhere from the Github repository. You can select any of the options depending upon your ease and desire. All of these options have been explained in-depth in this post.