Flask is a python-based backend framework that acts as a key ingredient to developing python-based web applications. Flask is a lightweight framework equipped with a built-in development server and efficient debugging support.

Although Flask falls under the category of microframeworks, however, various libraries and tools can be added to Flask that make it suitable for complex projects as well.

In recent computing advancements, users have shown interest in Linux-based systems. In today’s guide, we will show you how Flask can be installed on Arch Linux.

Before digging into details, you must have Python installed on your Arch Linux. The command provided here may be exercised to install Python (if you have not installed yet).

Ensure that the installed version of Python is either 3 or greater than 3. 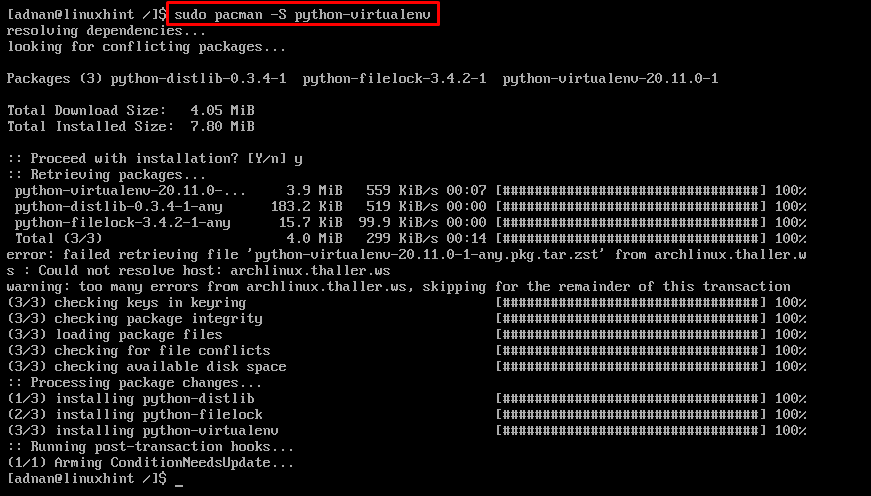 Additionally, you may require installing pip as well by issuing the command stated below:

How to install Flask for Arch Linux

This section enlists various steps that are carried out for installation of Flask.

Step 1: Create a new directory where the virtual environment will be created.

To verify the creation, execute the “ls” command and you will observe that the “flaskenv” has been created.

Step 3: Activate the virtual environment by issuing the command written below.

The output states that you are currently inside the virtual environment named “flaskenv”.

Step 4: Now, you are all set to install Flask inside the virtual environment via the command stated-below:

Here you go! Now you can develop web-based apps by using Python.

To check whether the flask is installed or not, you may check the version via the command mentioned below:

The output prints the version of Flask.

As the command execution is successful, the session of the virtual environment named “flaskenv” will be terminated as it is observed in the output as well.