FFmpeg is an open-source package that handles multimedia files. The multimedia file management includes various common tasks such as resizing, encoding/decoding, denoising, compressing, creating thumbnails, and much more like tasks. To accomplish these tasks, FFmpeg is enriched with tens of libraries.

In this technologically rich era, tools like FFmpeg are the requirement of all users. Keeping in view the importance of FFmpeg, we have listed down possible methods to install FFmpeg on Arch Linux.

How to install FFmpeg on Arch Linux using Pacman

The official package manager of Arch Linux named Pacman contains FFmpeg. Before installing any package, it is good practice to update the system’s packages:

After the update is completed, install the FFmpeg by issuing the following command. 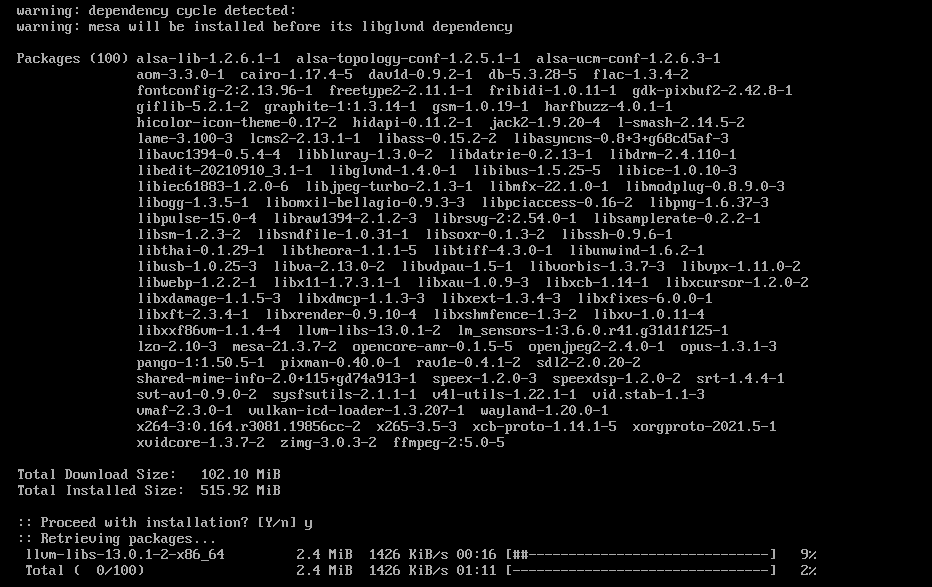 Once the installation is successful, you can check the version as follows.

How to install FFmpeg on Arch Linux using an AUR helper

The AUR (Arch User Repository) contains various packages that are community-driven and are available for Arch Linux users. To install any package from AUR, you need an AUR helper like yay, paru, aura, pacaur, and so on.

Here we used yay in the following manner to install FFmpeg.

Let’s say FFmpeg is already installed using Pacman then yay will ask you to remove FFmpeg as shown below.

How to remove FFmpeg on Arch Linux

As the installation was carried out using two methods, you can remove it using Pacman or using AUR helper as well.

The command written below removes the FFmpeg from Arch Linux. using pacman

To remove ffmpeg along with its dependencies, you can use the following command.

The yay can be used in the following manner to remove FFmpeg.

If the “ffmpeg-full” was installed, then you must specify its name to remove.

The FFmpeg is available on the official repository of Arch and AUR (Arch User Repository). This article demonstrates the methods to install FFmpeg using Pacman (Arch package manager) and yay (AUR helper). The FFmpeg manages the multimedia files with the help of numerous libraries supported by it. Because of its association with multimedia content, it is quite a beneficial project in this era.