BpyTop is an open-source command-line application allowing Raspberry Pi users to monitor their system resources like memory, CPU, and network information. It displays all the required information right onto your Raspberry Pi terminal. It works similar to HTop and Top but has a more advanced interface than them. You can even apply several themes to change the interface.

This article presents a detailed guide to install BpyTop on your Raspberry Pi device so that you can get the information about your device resources in a whole new way.

BpyTop: An HTop and Top Alternative for Raspberry Pi

The BpyTop script is written in Python language so you will need to download it from the Python package management system, commonly called as pip. To perform the installation of BpyTop through pip, you have to follow the below-mentioned steps:

Initially, you must need to update the packages installed on your Raspberry Pi device by using the below-given command: 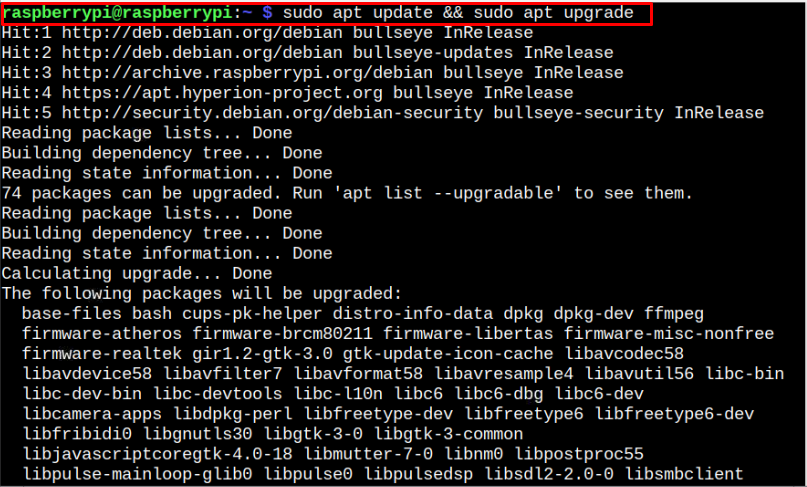 Press “Y” to confirm updating the packages to the latest version. 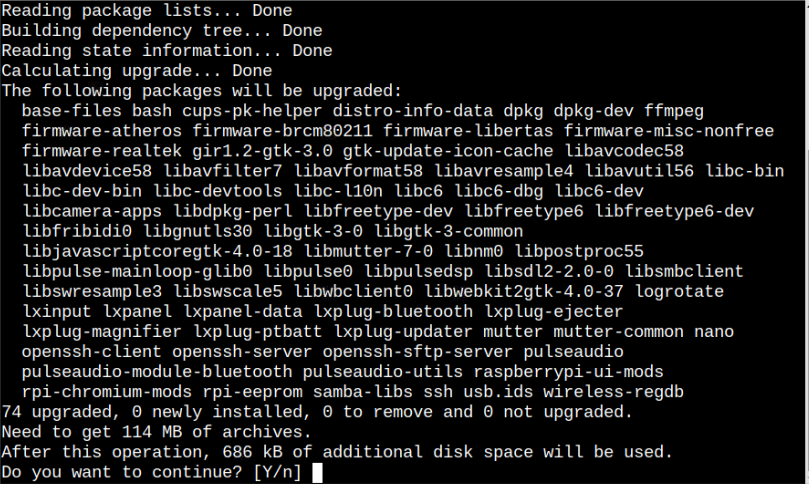 Next, you just need to use the following command to install Python3-pip as this will help you install the BpyTop on your Raspberry Pi device.

After installing pip on Raspberry Pi, you can easily install BpyTop by executing the following command:

After successfully installing BpyTop on Raspberry Pi, you can apply the following command to run the utility on the terminal: 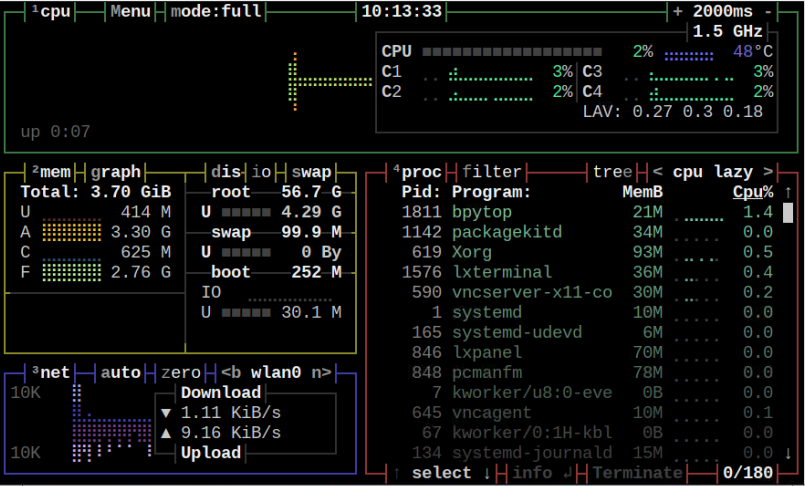 How to Change Themes for BpyTop

There are several themes you can be downloaded for BpyTop, which you can see on the website.

To install these themes one by one, first head towards the theme’s directory of BpyTop using the following command:

Then, use the following command to download a theme for BpyTop. Change the <theme_name>:

After downloading the themes, run the “bpytop” command again in the terminal and then use the “Esc” button to open up the BpyTop menu. 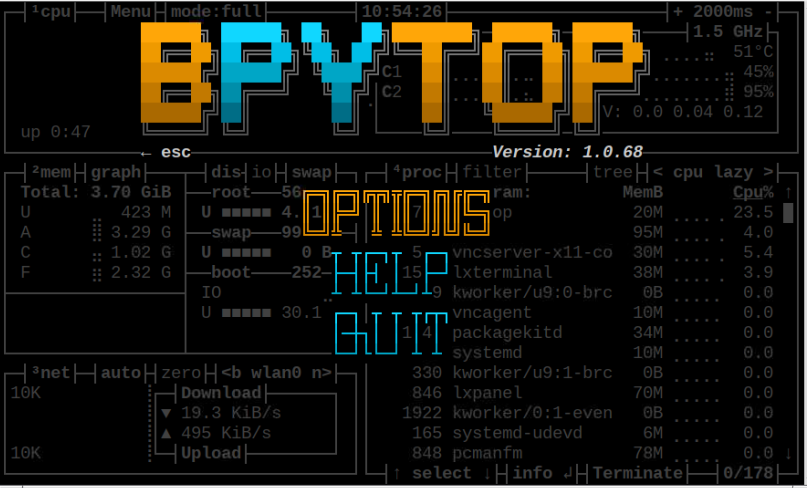 Go to the “OPTIONS”: 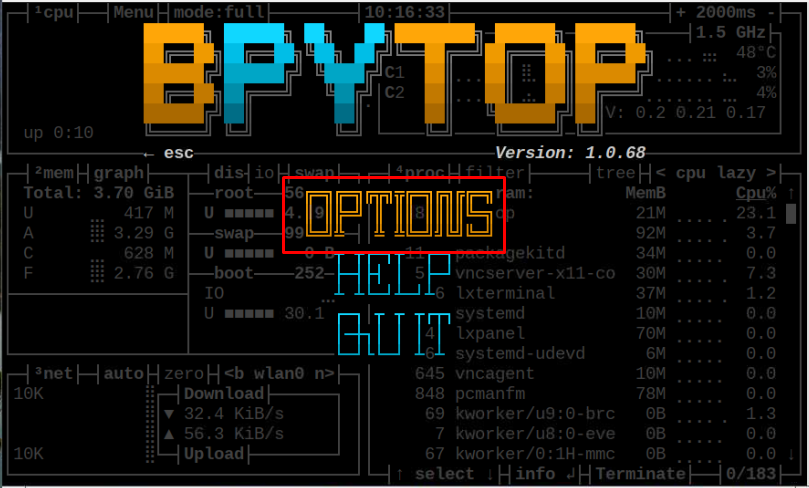 Select your theme by pressing the “right arrow” button from the keyboard. 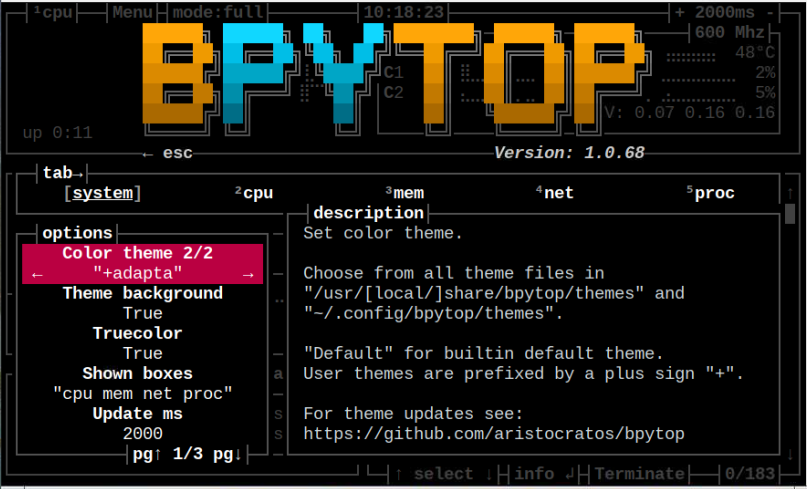 Press the “Esc” button two times to quit the BpyTop menu and after that, you will see that the theme has successfully changed on the BpyTop terminal screen. 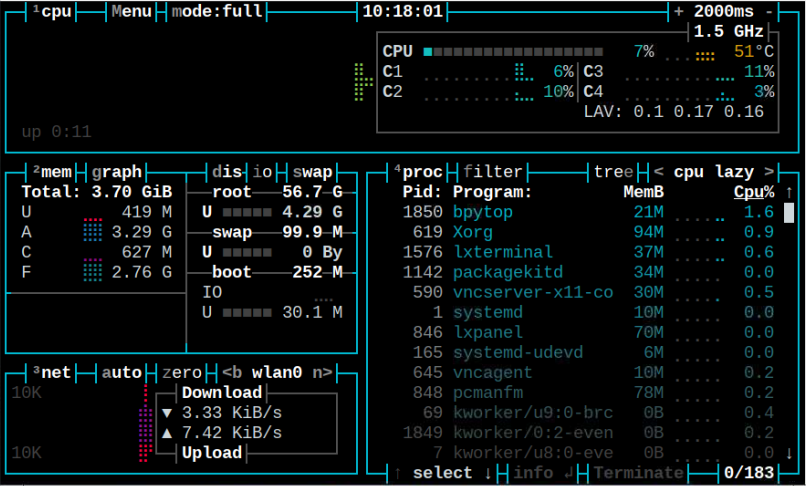 If you no longer require BpyTop service on your device, you can uninstall it any time using the following command:

BpyTop is a lightweight command-line application that is used to monitor system resources on the terminal window. The installation of this application is simple, which you can complete by first installing Python-pip3 on your Raspberry Pi device and then using the pip3 service to install BpyTop on your device. You can also apply different themes to change its interface and the detailed step-by-step procedure is already provided in the above guidelines.