Forms in HTML are used to collect information from users (on a web page) and to process that data. For instance, you would have encountered sign-in/sign-up forms that collect the credentials and process them for singing-in or creation of an account. The fundamental inforamtion regarding HTML forms is provided in this article. Additionally, we have also described an example to create HTML forms.

Here, we will look for the building blocks of HTML form elements and their respective attributes. So, let’s dig into them:

This tag is the base of HTML forms and is used to take the first step for creating HTML forms. The following syntax refers to the form tag:

The elements of form would be discussed in the upcoming sections. Here, we present the attributes table supported by the HTML form element.

The above table has summarized all the attributes supported by the form element. Let’s explore elements of HTML forms.

This element defines the label for HTML form elements to show the purpose/description of that element on the user’s screen. Although it is not a necessary element for creating HTML forms, however, it is recommended to add this element as it assists in guiding the users.

The syntax of label tag is described below

The name represents the value that would be displayed on the user’s screen and it accepts an attribute named for that contains the reference to the id attribute of the input element.

The functionality of the input tag depends on the attributes and their values. We have listed down the important attributes of the HTML input element.

The attributes provided in the table depict that the input element has a key role in creating HTML forms.

The input element allows you to insert a single-line text field. However, if you want to create multi-line text fields, you have to use <textarea> tag by using the following syntax:

This element accepts three attributes, rows, cols, and name. The rows and cols attribute to set the height and width of the attribute whereas the name attribute is used to recognize the textarea by the server.

From the above discussion, you would have gone through the building blocks of HTML forms. Let’s practice them to create a sample HTML form.

How to create an HTML Form

This section practices a few examples that create HTML forms in various scenarios.

Example
The code provided below creates an HTML form using the form element alongside input and label elements.

The description of the code is as follows: 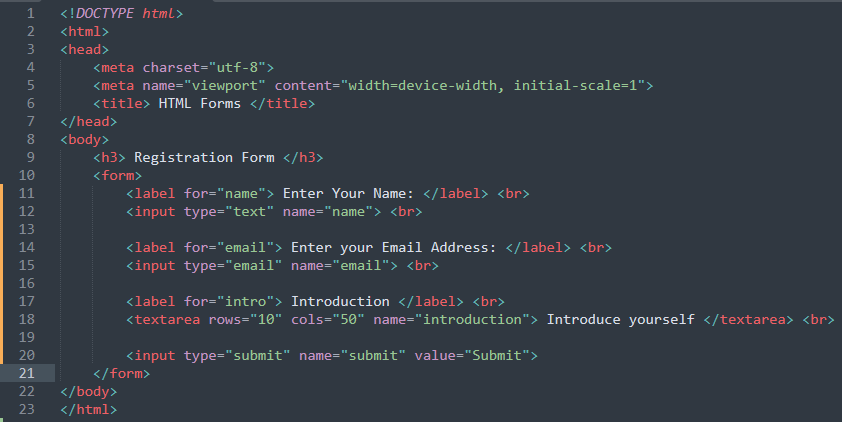 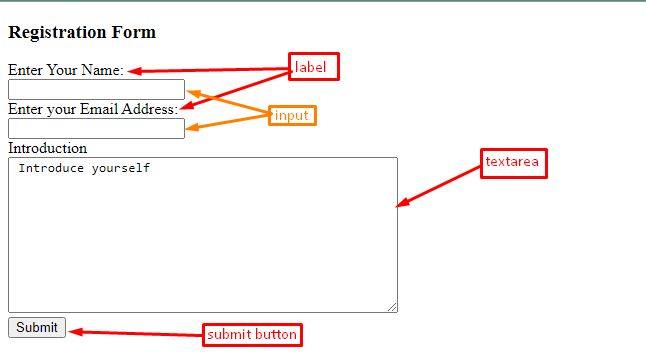 For a better understanding of the output, we have highlighted the area where the label, input, textarea, and submit buttons are created.

Forms in HTML are used to collect data from the user. It can be for any purpose such as customer information, registration, feedback, comments, etc. An HTML form may comprise various text fields, radio buttons, checkboxes, email fields, and many more. We have provided the fundamental elements of HTML forms and latterly these elements are used to create an HTML form as well.