Discord is a popular digital communication platform utilized for communicating with friends and fans on a server. This application offers the facility to create and customized servers. A Discord server is a type of community where like-minded people can meet and communicate without any hassle.

By using Discord, you can create multiple texts and voice channels, use the video and audio chat feature for communicating with your Discord buddies, and invite friends and fans to the Discord server.

This write-up will practically demonstrate the major uses of Discord. So, let’s start!

What are the uses of Discord

Here is the list of some of the major uses of Discord:

Now, we will demonstrate how to use Discord and get benefits from the above-given activities. So, start this journey by checking out the procedure to create a Discord channel.

How to create a Discord server

A Discord server is a type of community where like-minded people can meet and interact. In a simple Discord server, you are allowed to create multiple texts and voice channels, use the video and audio chat facility to communicate with your Discord buddies, and invite friends and fans to the Discord server.

For the purpose of creating a Discord Server on the Desktop application, you have to follow the below-given instructions.

First of all, open up the “Discord” application by searching it manually in the Startup menu: 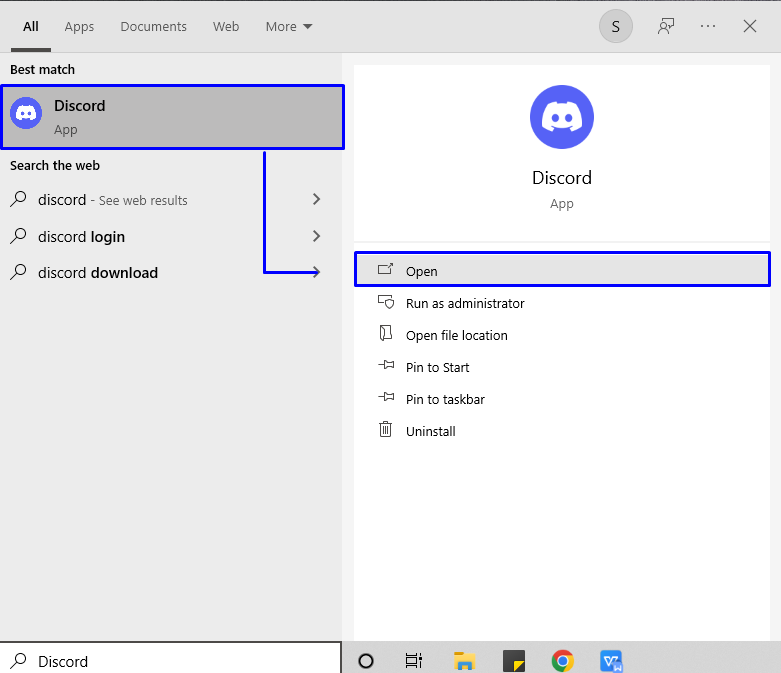 After opening the Discord application, look for the “+” plus icon on the left-side panel. This icon represents the option for adding a server on Discord: 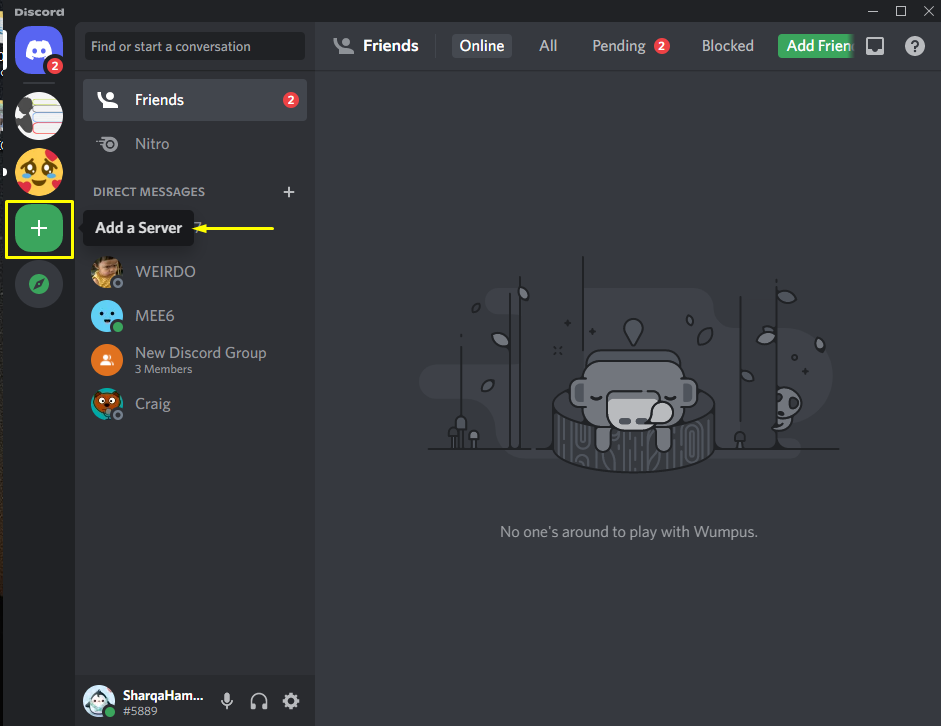 After clicking the “Add a Server” or “+” icon, a new “Create a server” window will appear on your screen where you can select a ready-made template or make a Discord server on your own. For instance, we will choose the “Create My Own” option to move ahead: 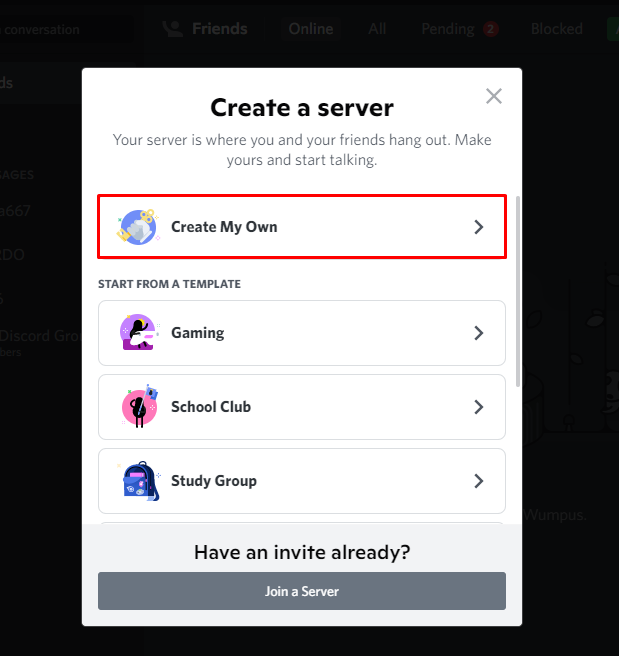 In the next step, figure out whether you only want to make a Discord server for your friends or family or if it is required for any community or club. In our case, we have selected the option “For a club or community”: 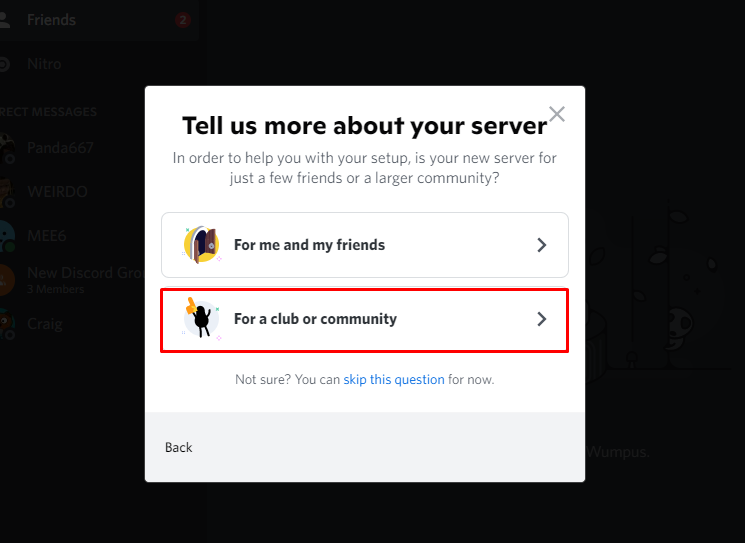 In the next window, you will be asked to enter “SERVER NAME” and upload a Server Icon for the customization. Here, we will specify “linuxhint server” as our server name: 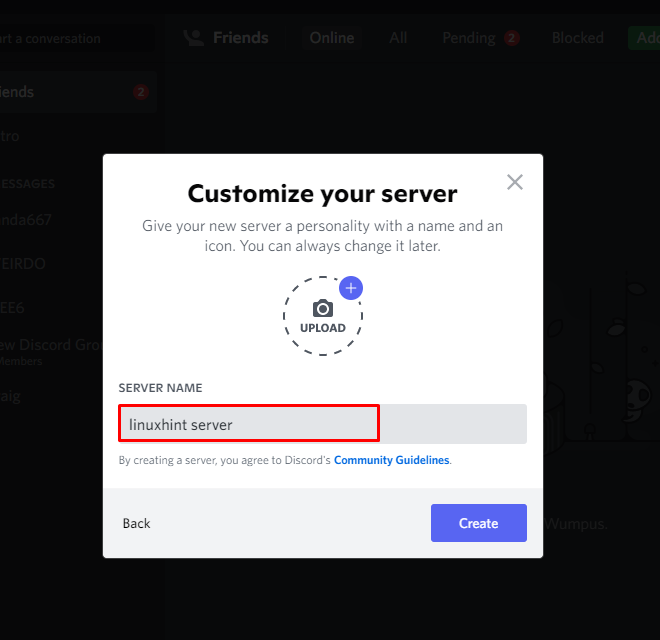 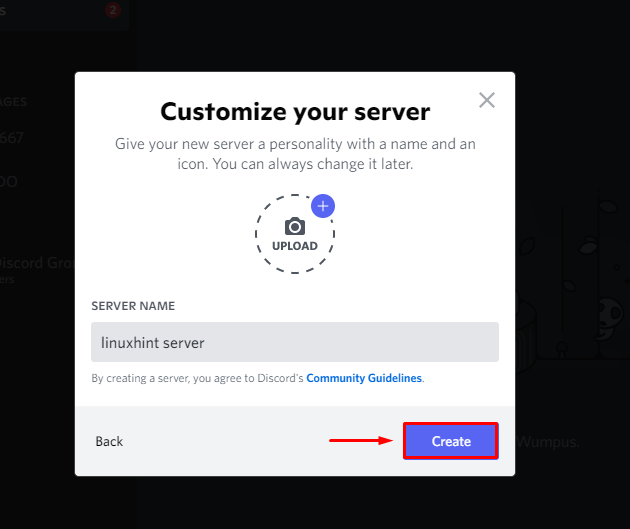 By carefully following the previous steps, your newly created Discord Server should be all ready to use now: 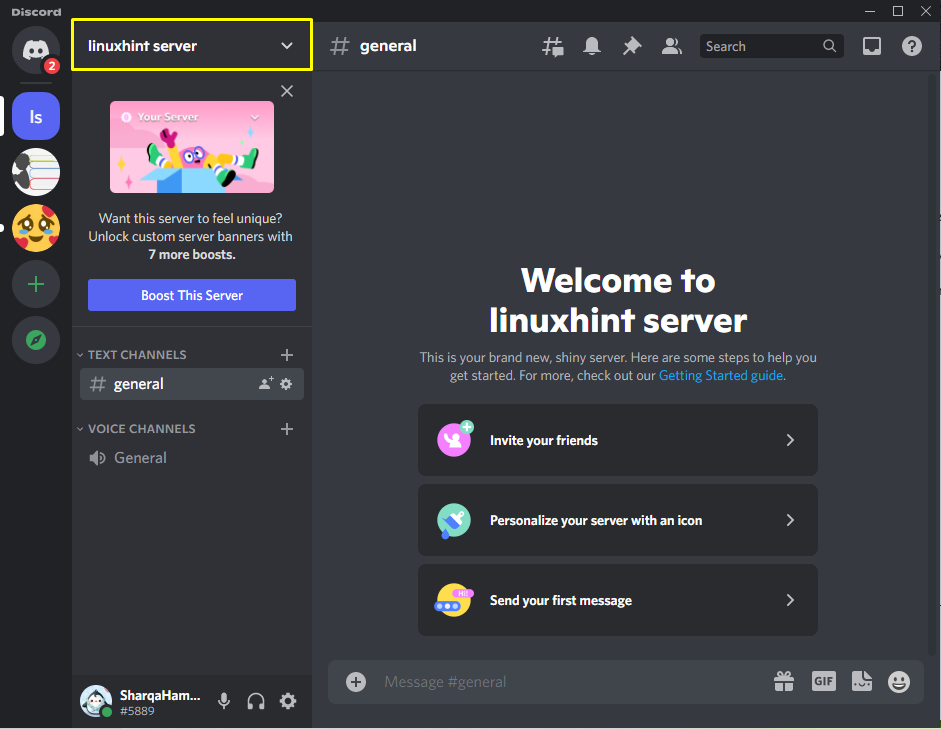 You can further invite people to your Discord server, create Channels, Categories, and Events or Edit the Server profile with the help of the provided options: 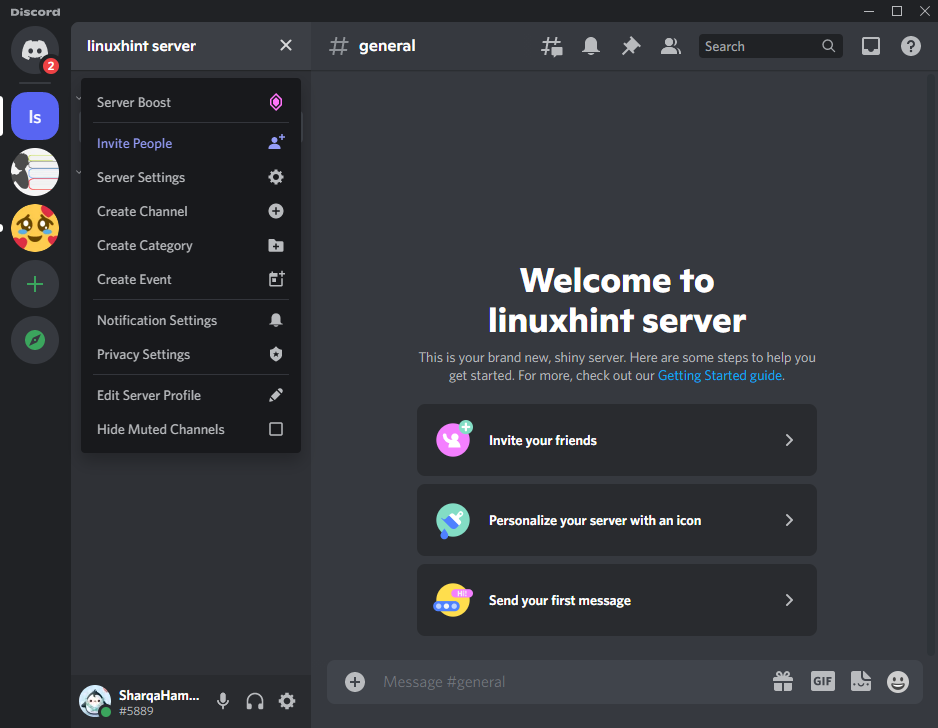 After creating the Discord server, you may want to send messages in the text channel. For this purpose, it is important for you to have information about the basic text formatting styles that Discord supports.

How to use Discord text formatting styles

While communicating on a Discord server, you may have noticed that other Discord users are sending messages in a variety of eye-catching designs and colors. Would not it be great if your messages stand out in the Crowd? Do you also want to emphasize some key points in your text messages or add some special text formatting style? If so, text formatting style is what you all need.

To use the Discord underline text format, switch to the server channel where you want to send a text. For instance, we will send an underline text in the “linuxhint-buddies” channel: 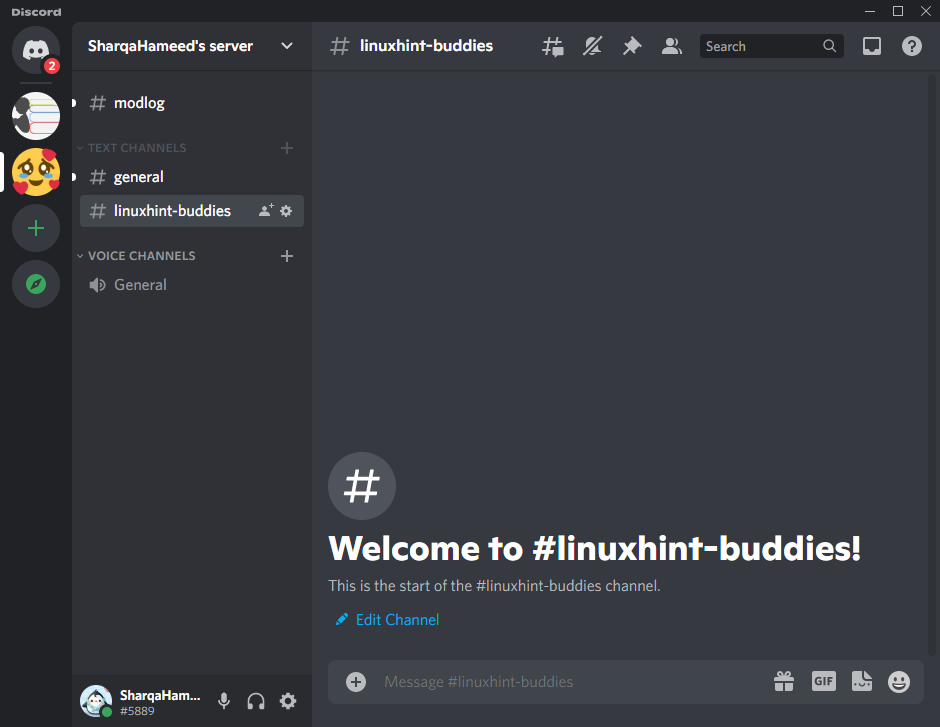 Next, type the desired message in the text field and add two underscores “__” before and after it:

After doing so, Hit “Enter” to send the underlined message in the selected Discord Channel: 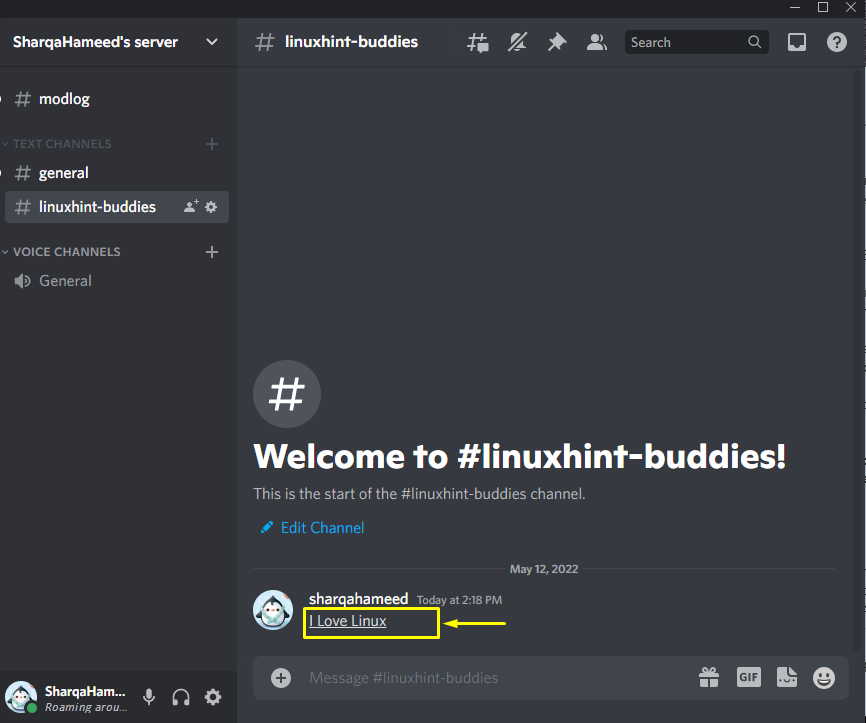 To use the Discord italicize text format, type the desired message in the text field and add one asterisk “*” before and after it: 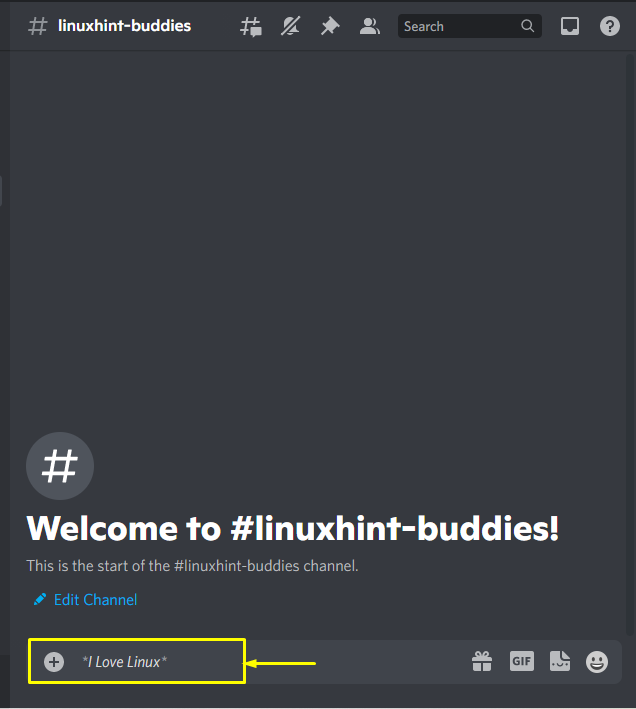 Another way to italicize is to enter the text, then select it. Upon doing so, Discord will show some pre-defined text formatting styles, including the “Italic” format, represented by the “I” icon. Click on it, and this operation will italicize the selected text:

After doing so, Hit “Enter” to send the italicized message on the Discord Channel: 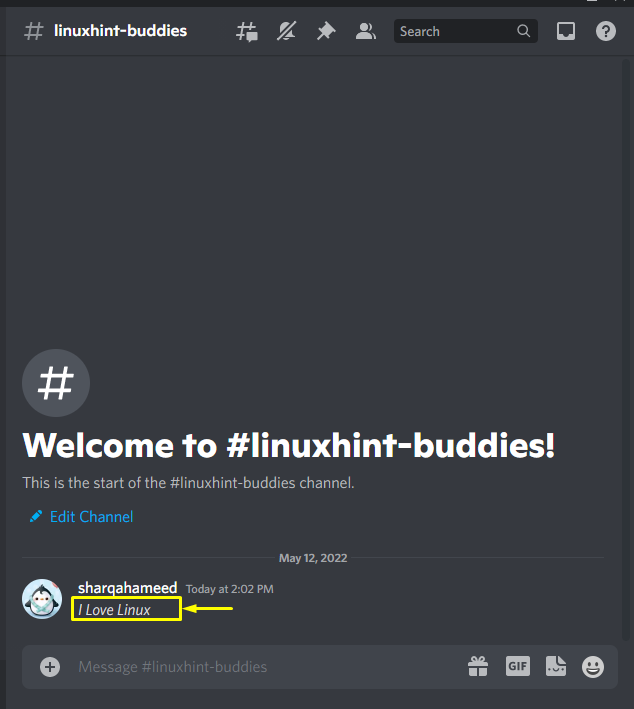 Similarly, to use the Discord bold text format, type the desired message in the text field and add two asterisks “**” before and after it: 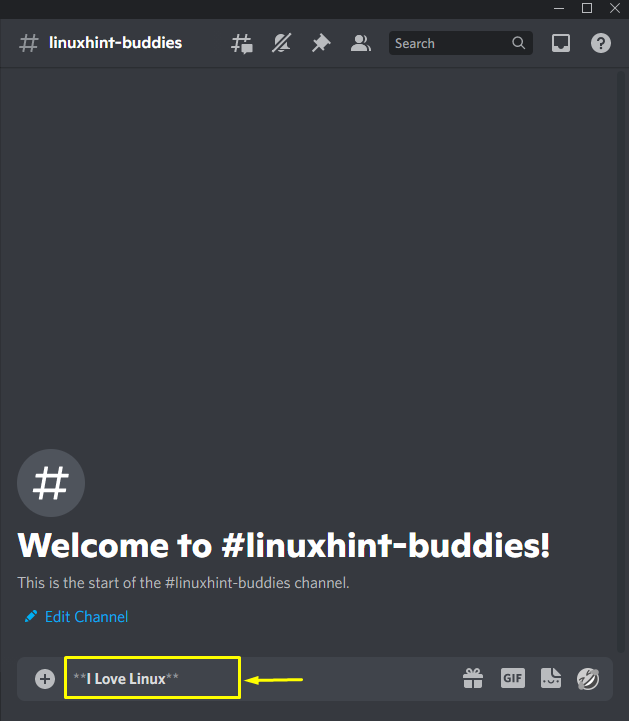 Another way to bold in Discord is to enter the text, then select it. Upon doing so, Discord will show some pre-defined text formatting style which includes a “bold” format, represented by the “B” icon. Click on it, and this operation will make your selected text bold in Discord:

After doing so, Hit “Enter” to send the bold message on the Discord Channel: 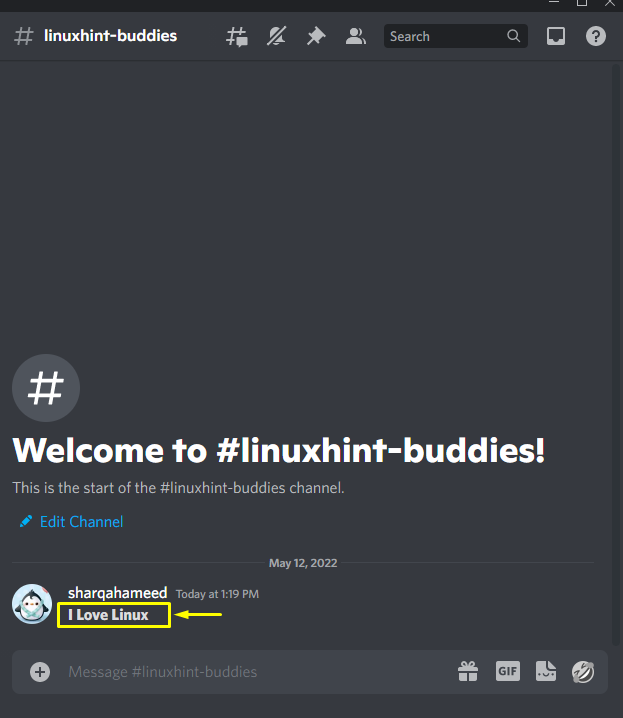 The above-given image signifies that we have successfully sent a bold text “I Love Linux” in the “linuxhint-buddies” channel.

How to use Discord spoilers

There exist chances that the text or images you want to share on Discord may contain any spoilers or any other sensitive material; you may not want to be visible by default. Fortunately, Discord offers the facility to mark such images or text as “spoilers” before sending them.

To send a spoiler text on Discord, type the desired message in the text field and add two vertical bars “||” before and after it:

Another way to mark text as a spoiler in Discord is to enter the text, then select it. Upon doing so, Discord will show some pre-defined text options, which include setting text as a spoiler, represented by the “eye” icon: 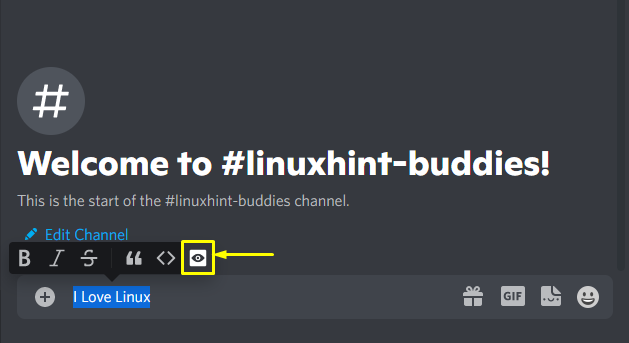 Clicking on the “eye” icon operation will convert your selected text into a spoiler:

After doing so, Hit “Enter” to send the spoiler message on the Discord Channel: 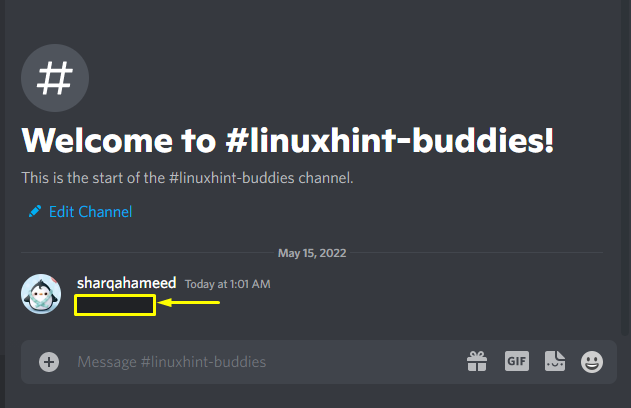 On the Discord server, if a person clicks on the spoiler text, the text body will be revealed on screen: 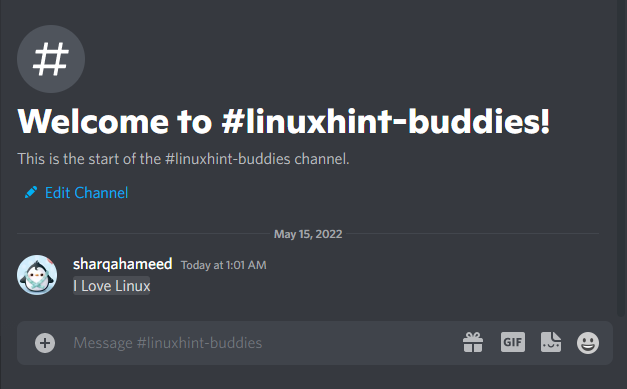 Whereas, to send a spoiler image, open up the Server channel where it is required to spoiler an image, move to the text area and click on the “+” plus icon for attaching an image: 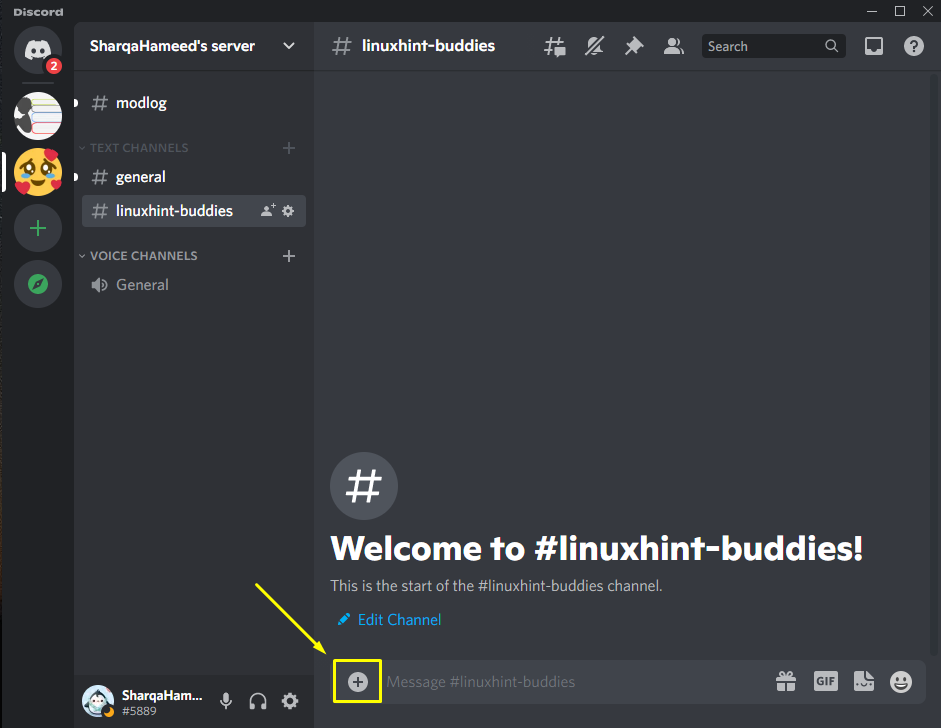 A pop-up menu will now appear on your screen, click on “Upload a File” from the available options: 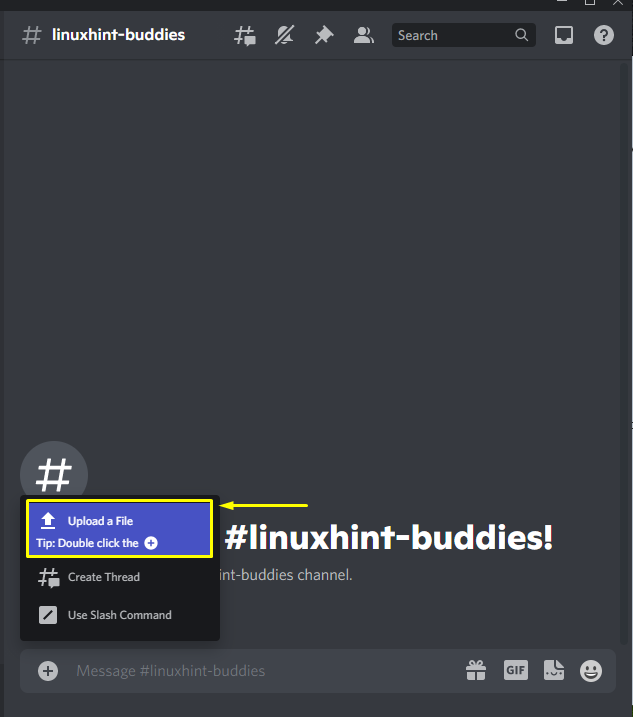 Then, select and open up the image which you want to send as a spoiler: 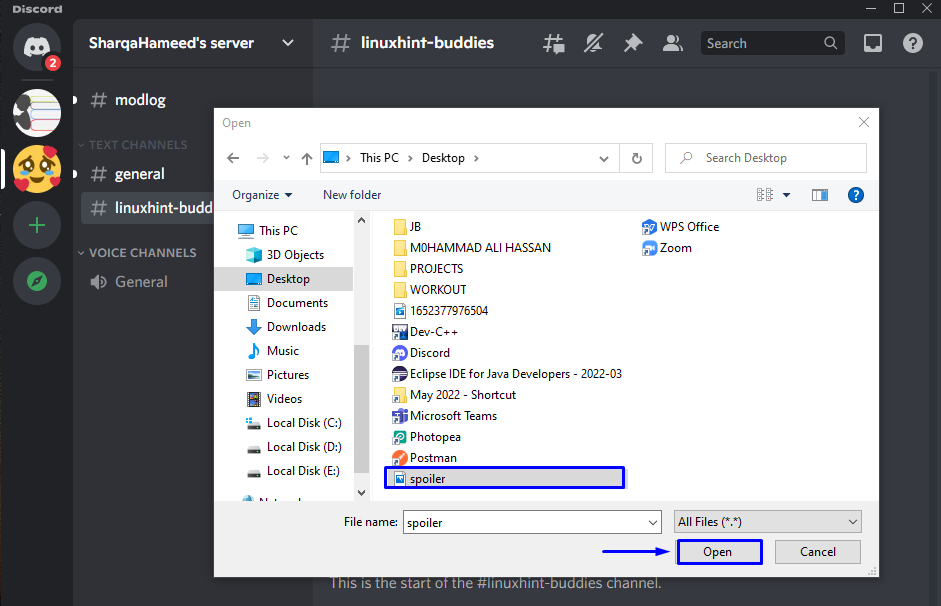 The selected image is now added to the textbox area. To make it a spoiler, click on the “eye” icon that is highlighted in the below-given image: 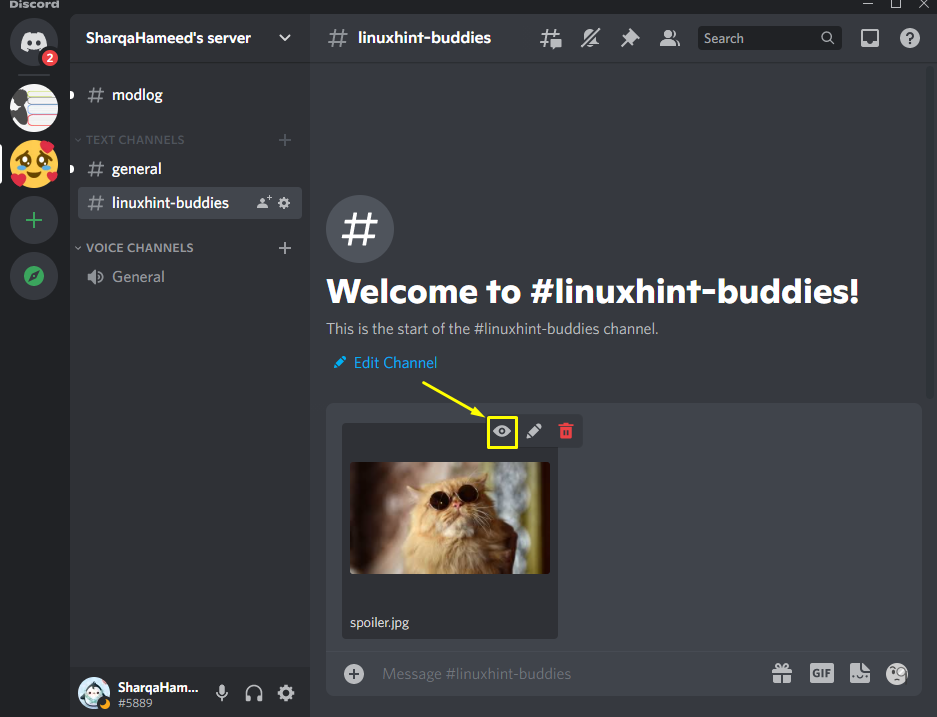 After performing the specified operation, the selected image will now have a blur effect with “spoiler” text present at the center of it. This indicates that the image is now converted into a spoiler. With that being done, send it to your Discord server by pressing “Enter”: 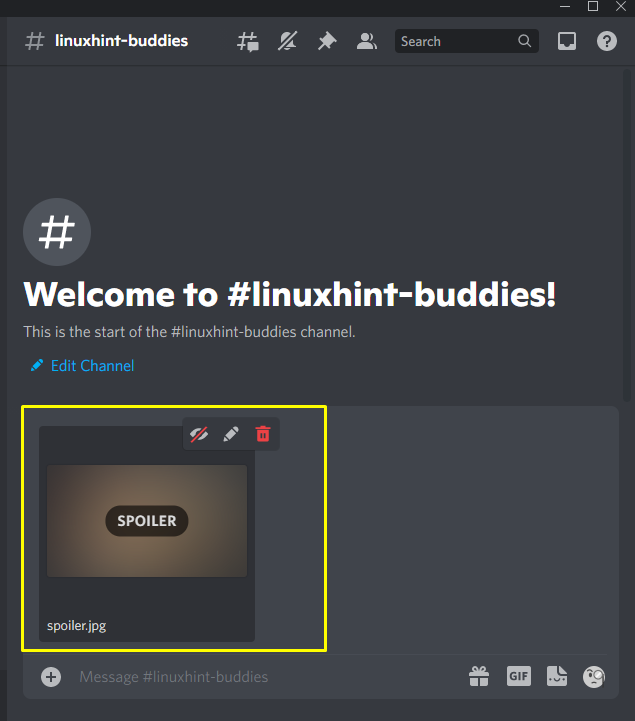 As you can see from the below-given screenshot, we have successfully sent the spoiler image in our “linuxhint-buddies” Discord channel: 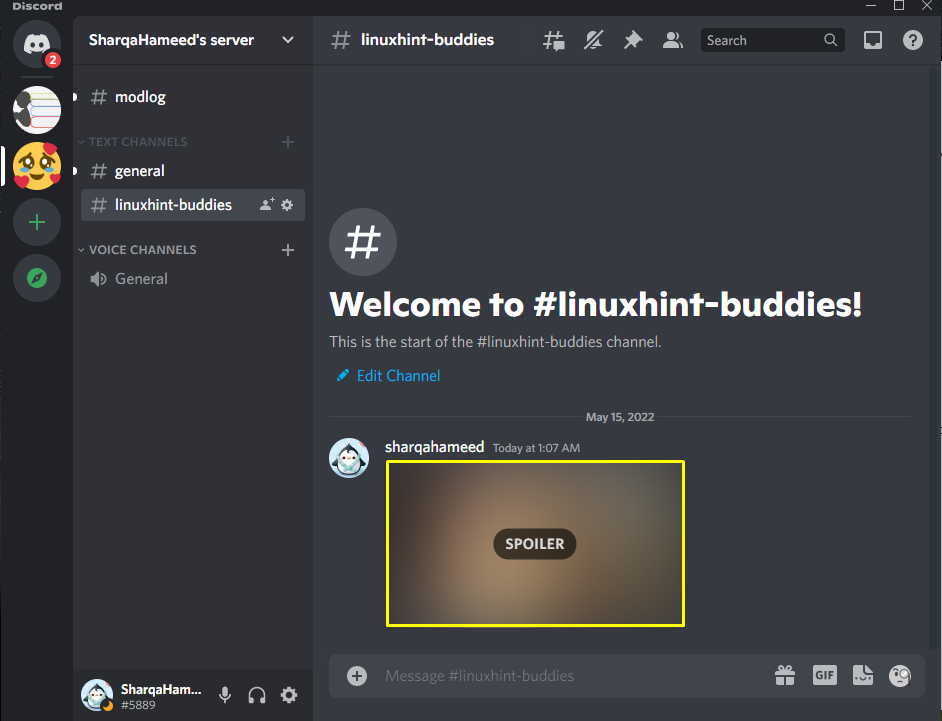 Anybody who wants to see the image will click on it, and its content will be revealed: 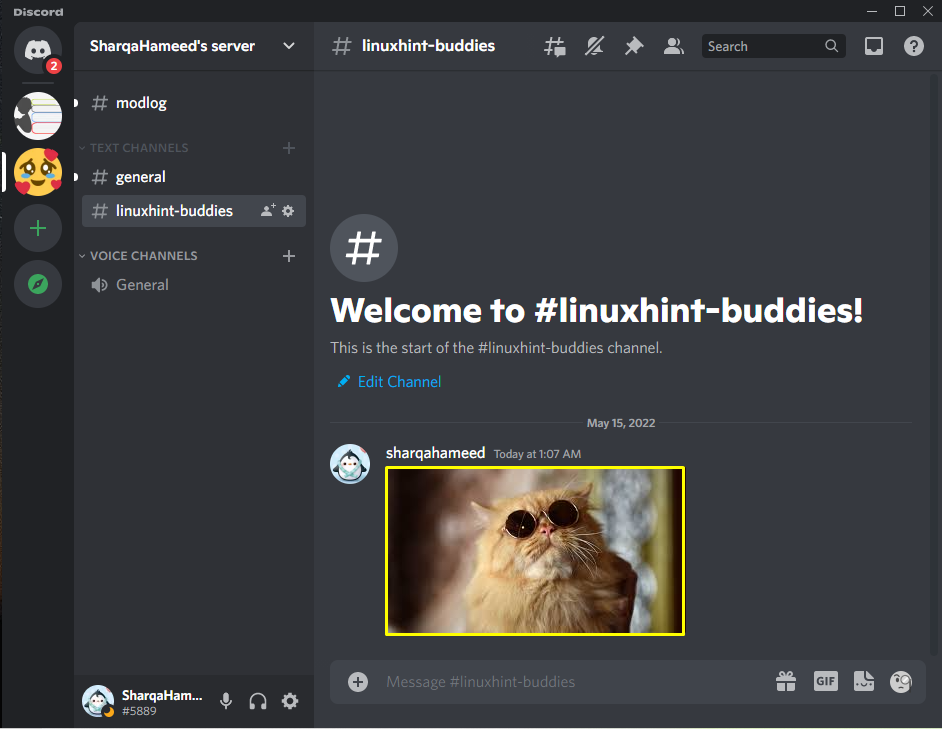 We have compiled the essential information to use Discord for chatting with friends on Discord servers, utilizing different text formatting styles, and sending spoilers texts and images.

Discord is a popular digital communication platform that can be utilized for communicating with friends and fans on a server. This platform has more than 300 million registered users. You can use Discord for creating servers, sending texts in different text formatting styles, spoiler images or texts, and streaming videos on a Discord server. This write-up practically demonstrated the major uses of Discord.