The Internet has opened new gates of knowledge by providing a gateway to the universe of enriched knowledge. Browsers play as a medium between users and the content they want to get with the help of the internet. As the computing era evolved, various surfing browsers came into existence and gained popularity, such as Google Chrome, Mozilla Firefox, Safari, Opera, etc. However, among all these, Chrome and Firefox are the trendings and most used surfing engines over the globe. Firefox comes as a built-in browser for Ubuntu; like other software packages, it is mandatory to keep your browser up to date to keep enjoying the latest and best services. It is not just about the version number, but the updated packages are bugs-free, more secure than previous releases. So, outdated software may not run smoothly, and it can put your whole system at a security risk. Motivated by this, the following guide is to demonstrate step by step procedure to update the Firefox browser in Ubuntu. Let’s begin:

How to update the installed Firefox browser on Ubuntu

This section contains the various ways to upgrade the Firefox browser on Ubuntu; the below-mentioned methods can be followed to update Firefox

You can use the Ubuntu command line terminal to update the Firefox to the latest version.

The very first practice you must follow is to check the current version of your Firefox, open the terminal “Ctrl+Alt+T,” and run the following command:

Once it is opened, execute the following command in the terminal to get the updated information about the packages:

The above command will come down with the latest versions that are available. You can execute the following command to finally install the available updates, and the packages will be upgraded to the latest available versions.

The above command will upgrade the packages of the whole system. However, if you want to update Firefox only; to upgrade Firefox, use the command given below:

Alternate to the above, you can also use the install command in Ubuntu to get the updated version of the tool (even if it is already installed). The below-stated command will update the packages list of Ubuntu:

After updating the system, you can go for installation of Firefox (updates to the newest version if available):

Firefox comes as a default browser for Ubuntu; however, its developer version is not installed or updated by default. The developer version is good for system admins, security testers, developers and is not recommended for regular users. In order to get the updated Firefox developer’s version, follow the commands mentioned below:

To add the PPA repository for the developer’s version, use:

After that, update the system:

And after that, install the firefox using the following command:

It is noticed that Mozilla Firefox returns the updated version in all ways.

Ubuntu software center is the built-in application in Ubuntu to provide ease of installation, updating of basic ubuntu packages. You can update the Firefox using the Ubuntu Software Centre by following simple steps as given below:

Step 1: Navigate to the “Ubuntu Software Center” icon available on the taskbar of Ubuntu; click on it to open:

Step 2: Now, click on the update tab available on the top of “Ubuntu Software”; if there is any update available, you will get the information here, and you can update the software easily. 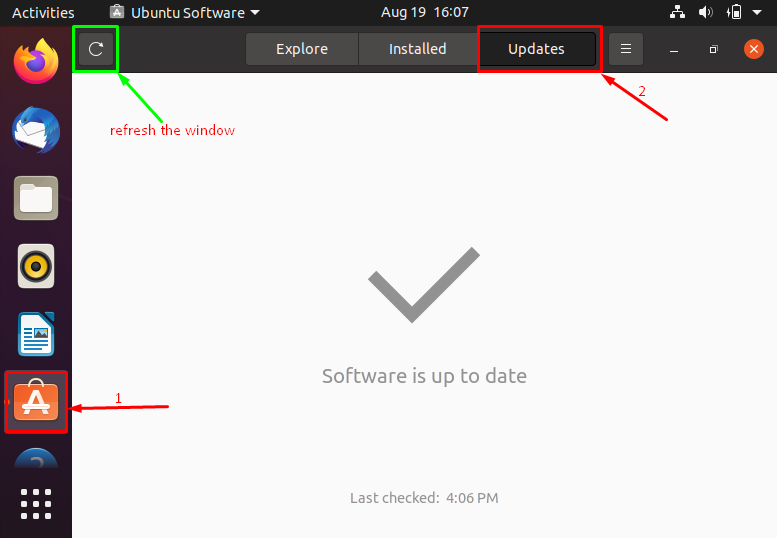 Alternatively, you can update Firefox by opening the installed version.

To do this, click on the Firefox icon, which you can find on the taskbar of Ubuntu: 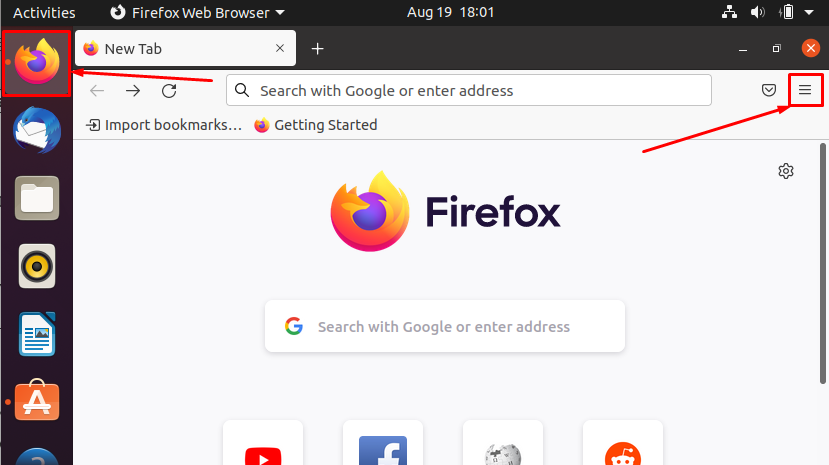 Click on the open application menu icon placed on the top bar of the Firefox window, scroll down on this menu, and click on “Help”. 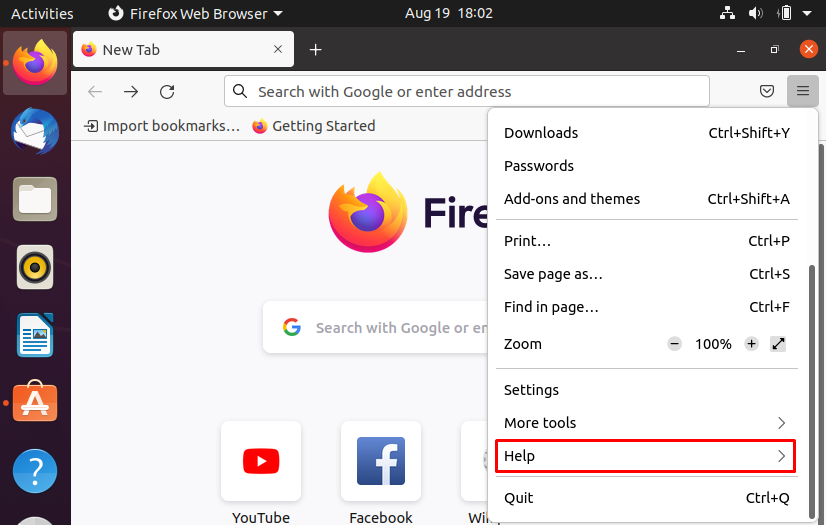 After that, you will find the “About Firefox” option:

Upon clicking this option, a new window will be displayed that contains the current version of Firefox, and it also shows if there is any update available; you can download and install the update from here too. 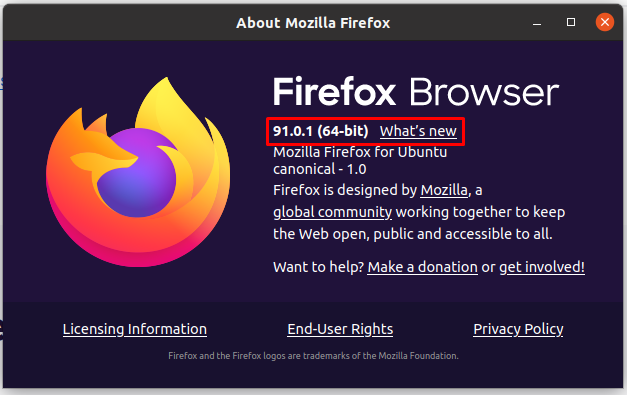 Firefox is a globally used internet browser developed by Mozilla and comes as a default surfing engine for Ubuntu. In this guide, we have presented several ways to update your Firefox browser in Ubuntu. Updates enable users to experience new features and a more secure version of the tool. You can update the Firefox browser by multiple methods; like, the command line terminal of Ubuntu can be used, Ubuntu software center also facilitates updating this browser. It is recommended to keep your software updated because outdated software may be a security risk; the tool developers mainly focus on removing bugs and adding features on every update that increase the efficiency/security of the software.