Arduino is one of the viable options for the students who want to learn how to program the microcontrollers as this platform provides everything a beginner needs to get started with Arduino programming. Moreover, a beginner can expect some issues at the start while trying to write an Arduino program so don’t worry as a wide range of online help is present on the internet.

However, some issues, especially the solutions to uncommon issues are difficult to find. So, if you need to stop an Arduino program but are unable to do it then this guide will be helpful for you as I have explained different ways of stopping an Arduino program.

In what situations does the Arduino program need to be stopped?

The reason to stop Arduino program may vary, some of them are:

There are multiple ways of stopping an Arduino program and it depends for what reason the execution of it needed to be stopped:

Disconnecting the supply of Arduino

Resetting the Arduino using the Reset button or Reset pin

Using the sleep mode of Arduino

If the Arduino program is required to be executed for some time only then the sleep mode of Arduino can be used. And there are total 6 sleep modes available for the Arduino:

Out the six there are three main modes that are mainly used that are:

How to use the sleep mode of Arduino?

For using the sleep mode there is a specific library which can be downloaded from here, or you can install it from the library manager of Arduino IDE by searching sleep mode in its search bar.

To illustrate how to use sleep mode for Arduino I have used the power down mode whose code is given below:

int sec = 0; /* declaring the variable for storing the count*/
Sleep sleep;
unsigned long sleepduration; /*duration for which the Arduino needs to be in sleep mode*/

if (sec >= 10) { // keeping the Arduino on for 10 seconds
sec = 0;
Serial.print("going to sleep for ");
Serial.print(sleepduration); // printing the given duration of sleep for Arduino
Serial.println(" milliseconds");

delay(100); /* giving delay to allow serial print the data before going to sleep*/

sleep.pwrDownMode(); //giving the sleep mode to Arduino
sleep.sleepDelay(sleepduration); //sleeping the Arduino for the given duration
}
} 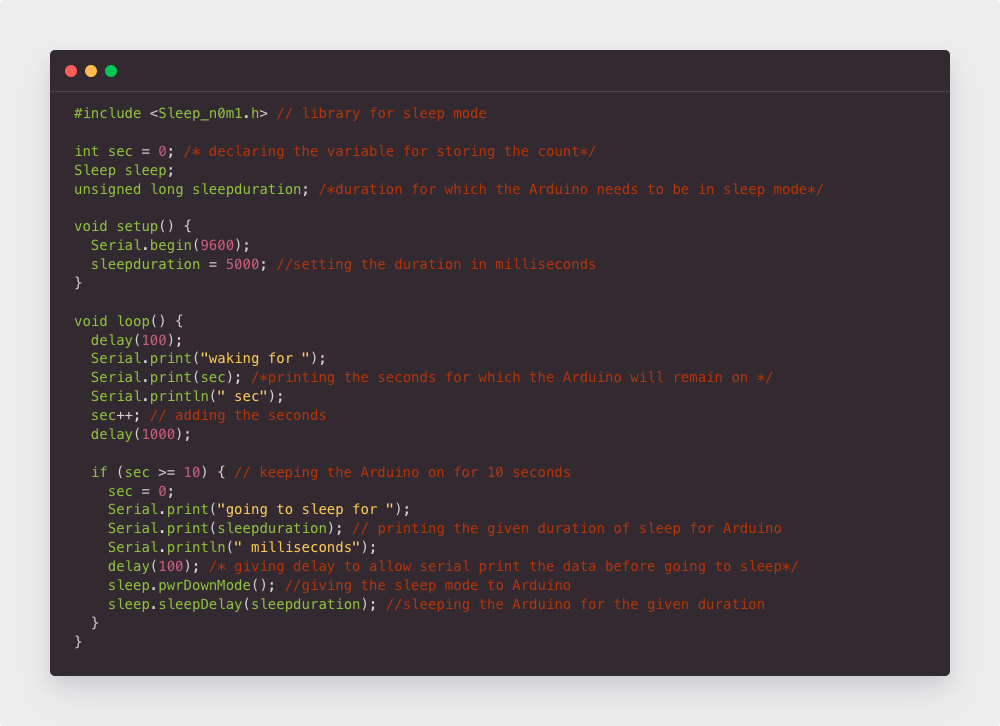 Note: Interrupts can also be used for Arduino to move it in and out of the sleep mode

What is the difference between delay and sleep mode?

Using delays in the Arduino code

Important Note: All the above methods except using the loops, conditional statements, sleep mode and disconnecting Arduino from supply can stop the Arduino program on a temporary basis.

Sometimes you may need to stop an Arduino code and there are multiple ways of doing it. Arduino codes can be stopped using loops, conditional statements. You can also reset the Arduino but these methods temporarily stop the Arduino code. To stop the code while executing it you need a third party library called Sleep_n0m1.