Samba is a powerful file-sharing tool that allows you to share files across multiple systems running different OSs and all connected through the same network. Samba is an ideal file and print sharing solution for even a scenario with thousands of users. Also, it allows connecting a Linux system to a Windows domain.

In this post, we will cover the process on how to remove and uninstall Samba from Ubuntu OS. Let’s get started.

First, run this command to see if Samba is installed on your machine:

The version number in the output confirms that you have Samba installed in your system.

Follow the method mentioned below to uninstall or remove Samba from your Ubuntu machine.

You may be asked to enter the pseudo password. Type the password and hit Enter. Then it might ask if you want to continue the operation. Type y and hit Enter to continue.

This should remove Samba from your Ubuntu machine.

There are two other Samba packages Samba-common and Samba-common-bin that are also installed along with Samba. You can also remove those packages through the command below:

It might ask if you want to continue the operation. Type y and hit Enter to continue. 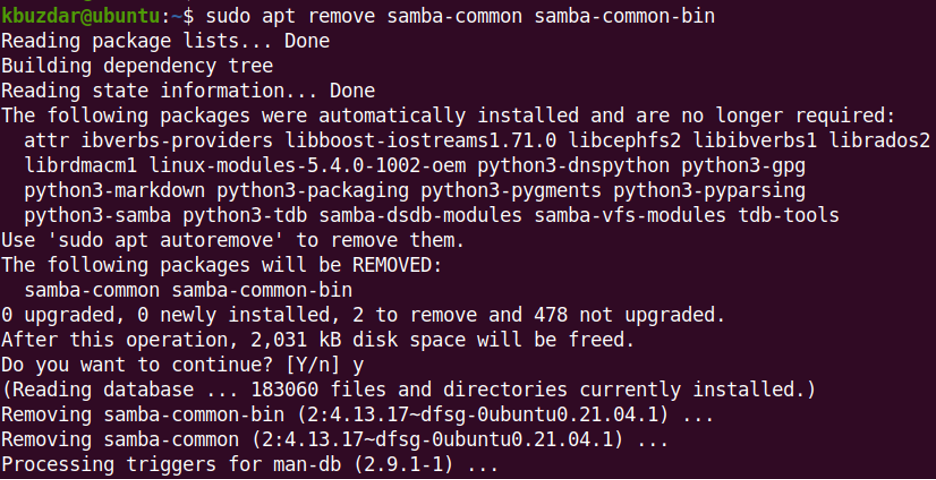 To remove the dependencies that were automatically installed along with Samba installation, run the command below:

When prompted for confirmation, type y and hit Enter.

If you want to remove Samba along with the configuration files, you will have to use the purge command. Run the command below to purge Samba:

It might ask if you want to continue the operation. Type y and hit Enter to continue.

Sometimes, the purge command does not delete some Samba directories because they are not empty. To delete those directories too, run the command below:

This post covered how to remove and uninstall Samba from Ubuntu. It also covered how to purge Samba if you want to delete the configuration files of Samba as well.