What Does Open Port Mean?

Nmap can be installed using the following command in the terminal:

After installing nmap, verify the installation by checking the version of the nmap:

If it gives the version of nmap, then it is installed perfectly, otherwise, try the above commands again to install nmap properly. Nmap is used to perform several related to networks, and port scanning is one of those tasks. The nmap tool is used along with many options. We can get the list of all the available options by using the following command:

So, to scan your localhost, use the apprehended command below:

It will list all the open ports on localhost, as displayed in the above image. We can also use nmap to scan remote hosts:

Also, we can use the hostname of the remote server instead of an IP address:

The above command will scan all the hosts with IP addresses in the subnet defined in the command.

Sometimes you have to scan ports on random hosts, which are in different subnets and are not in sequence, then the best solution is to write a hosts file in which all the hostnames are written, separated by one or more spaces, tabs, or new lines. This file can be used with nmap as follows:

We can use nmap to scan a single port on the system by specifying the port using the ‘-p’ flag, along with nmap, as in the following command:

Range of ports can also be scanned on a system using nmap in the following way:

We can scan all the ports of a system using nmap:

To get a list of the most commonly open ports on your system, you can use the nmap command with the ‘-F’ flag:

TCP ports can be scanned on the system using nmap by just adding the ‘-T’ flag, along with the nmap command:

Similarly, for UDP ports, you can use the ‘-U’ flag with the nmap command:

The lsof command, also known as ‘list open files’, is used to get the information about open files used by different processes in UNIX and LINUX like operating systems. For most of the Linux distros, this tool comes pre-installed. We can verify the installation of lsof by just checking its version: 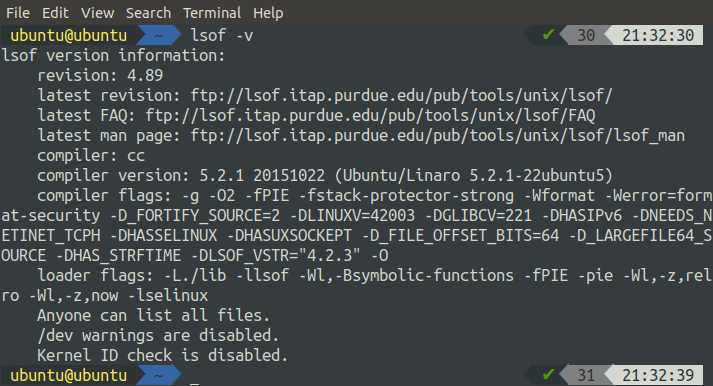 If it does not show the version, then lsof is not installed by default. We can still install it using the following commands in the terminal:

We can use the lsof command along with different options. The list of all the available options can be displayed using the following command in the terminal:

Now, in this section, we are going to use lsof to display ports of a system in different ways:

The above command has displayed all the open ports. We can also use the lsof command to display all the open sockets:

We can list filtered ports based on a protocol using lsof. Run the command given below to list all the TCP Connection types:

Similarly, we can list all the UDP connection types using lsof in the following way:

The netstat, also known as network statistics, is a command line program used to display detailed information about networks. It displays both incoming and outgoing TCP connections, routing tables, network interfaces, etc. In this section, we will use netstat to list open ports on a system. The netstat tool can be installed by running the following commands:

After running the above commands, you can verify the installation by checking the netstat version:

If it displays the version of net-tools, then the installation is fine, otherwise, run the installation commands again. To get an overview of all the available options that can be used, along with the netstat command, run the following command:

We can get a list of all the listening ports using the netstat command in Ubuntu by running the following command:

For listening to the UDP ports, use the following command:

To get the list of all the listening UNIX ports, you can run the following command in the terminal:

To get a list of all the connection regardless of their state, use the ss command without any flag:

To get all the listening TCP ports, we can use the ‘-t’ and ‘-l’ flag along with the ss command:

Similarly, we can get a list of all the listening UDP ports using the ss command along with the ‘-u’ and ‘-l’ flag:

You will get a list of all the inbound and outgoing connections if you have connected to a remote system using ssh.

For system administrators, security professionals, and other IT related persons, it is important to be aware of the open ports on the servers. Linux is rich with the tools used to diagnose networks and provides many tools that can be helpful for various kinds of networking activities. In this tutorial, we have used some tools like netstat, ss, lsof, and nmap to check for open ports on Ubuntu. After going through this article, you will be able to easily list all the listening ports on your Linux server in many ways.