What is Linear Regression?

In data science, Linear Regression is a supervised machine learning model that attempts to model a linear relationship between dependent variables (Y)  and independent variables (X).  Every evaluated observation with a model, the target (Y)’s actual value is compared to the target (Y)’s predicted value, and the major differences in these values are called residuals. The Linear Regression model aims to minimize the sum of all squared residuals. Here is the mathematical representation of the linear regression:

In the above equation:

a0 = Intercept of the line that offers additional DOF or degree of freedom.

a1 = Linear regression coefficient, which is a scale factor to every input value.

Remember that the values of X and Y variables are training datasets for the model representation of linear regression.

When a user implements a linear regression, algorithms start to find the best fit line using a0 and a1. In such a way, it becomes more accurate to actual data points; since we recognize the value of a0 and a1, we can use a model for predicting the response. 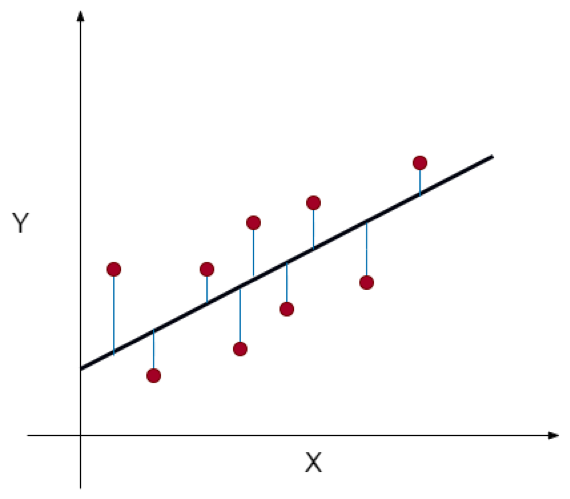 This type of linear regression works by using the traditional slope-intercept form in which a and b are two coefficients that are elaborated “learn” and find the accurate predictions. In the below equation, X stands for input data, and Y stands for prediction.

A multivariable regression is a bit more complex than other procedures. In the below equation, 𝒘 stands for the weights or coefficient which requires to be elaborated. All variables 𝑥1, 𝑥2, and 𝑥3 information attributes of the observations.

Now let’s consider every step for the house price prediction using linear regression. Consider a company of real estate with datasets containing the property prices of a specific region. The price of a property is based on essential factors like bedrooms, areas, and parking.  Majorly, a real estate company requires:

Below is the code to set up the environment, and we are using scikit-learn to predict the house price:

After that, read the prices data of the house:

Here is the table with the complete details (data set) of different houses:

Now, we will perform the data cleansing and the exploratory analysis using the below code:

#check for nulls in the data
houses.isnull().sum()

According to the dataset, there are not nulls available:

After that, we build a linear regression model. Prepare the data which will define the predictor and response variable:

We can split data into the train and test; the train or test split presents two randomly created subsets of our data. These test/train data are used to fit the learning algorithm so that it can learn how to predict.  The test set we have used to obtain an idea of working the model with new data.

After that, fit the model on the training set.

Once we fit the model, then we have to print all coefficients.

The value of Y will be equal to a0 when the value of X = 0; in this case, it will be the house’s price when the sqft_living is zero. The a1 coefficient is the change in the Y divided by changing the value in X. the increment of the one sq meter in the size of the house is associated with the price increment of 282 dollars.

Once we have done with the above procedure, compute an RMSE or Root Mean Squared Error it is the most commonly used metric for evaluating the regression model on a test set:

So as you can see that, we got a root mean squared error of 259163.48 after predicting the house’s prices. We are using a single feature in the above model; the result was expected. However, you can improve the model by adding more features.