So, let’s start with login and then the launch of its Terminal application with “Ctrl+Alt+T”. Get started with the formation of a new C-type file first. This is necessary as we have to perform the codes within a file and the Linux shell doesn’t compile the C code itself. Thus, we will be using the Ubuntu 20.04 Linux console shell to make a new C file using its touch instruction. This document will be formed in the home folder or directory of the Linux system. If you want to just open it within the text editor, open the file explorer and double tap on the file name. Otherwise, we recommend you to open it within the GNU nano editor using the shown-below “nano” instruction on the shell screen.

We will be taking a look at the syntax of a simple program statement in C to display the string “Hello World” on the Ubuntu 20.04 shell. For this, you must utilize the “printf” statement of C language in the code. As you can see in the attached image below, we have opened the file and added a printf statement. It is more like a printf function as it contains the parenthesis. Within its parenthesis, we have used inverted commas to add a “Hello World!” string. After this statement, you have to add the “;” semicolon to make it executable. This is the most basic syntax for the “Hello World” program. Let’s execute the code to see its output.

Now, we need the C compiler in Ubuntu 20.04 to compile the code. For that, make use of the “gcc” compiler in the shell and execute the shown below instruction. You will get an error saying that the declaration has been missing for the “printf” statement.

Let us make you know that the C and C++ program execution always starts from its main() method. Without the main() function, our program will never get executed. So, we have added the printf statement containing the string “Hello World” within the main() function of the C file after opening the same C file. Let’s save the below-shown updated code and execute it.

While the compilation of this updated C code, we have got another warning showing that the printf statement is lacking its implicit declaration within the code which is its header library i.e., “stdio.h”. So, we want to add the library in C code before compiling it.

Thus, we have opened the file once again and added the “stdio.h” header library using the “#include” keyword before it. This header must be placed at the start of this C file as shown. Along with that, we have added the “\n” sign within the “Hello World” string of the printf statement to add the end line after it. If we don’t add that, our output and next instruction line will be displayed at the same line on the shell screen.

Let’s save the updated code C file once again and make it compiled on the shell. Using the gcc compiler of C language, we have compiled the code and it got successful as the below-shown image demonstrates. After that, when we executed our compiled C code, it shows the “Hello World” string on the shell output screen.

The first example was the most basic one to start from. Let’s move a little forward to enhance our level of knowledge and expertise in the C language. Within this example, we will try to display the “Hello World” string more than 1 time. For this, we must practice the C “for” loop in the code. So, we have opened the same C file add updated its main() method. At the start of a main() function, we have initialized a “for” loop starting from 0 and ending before reaching 10. The loop value is used to increment by 1 at each iteration to move towards the next. On each iteration, the “Hello World” string will be printed out. The main() function got completed here and the code ends. Let’s save this code and see the output for this code.

The gcc compiler has been utilized to update this example code file i.e., “hello.c”. After the successful compilation of our updated C code, we have executed it with the “./a.out” instruction. In return, the “Hello World” string has been displayed 10 times on the shell as we have used the “for” loop starting from 0 to 10. The use of “\n” is adding a line break after each “Hello Wolrd” string on the output screen as below. 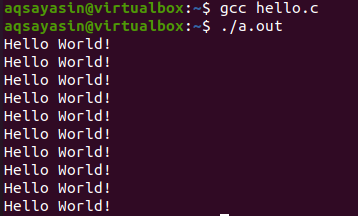 We have taken a look at the simplest examples to display “Hello World” on the shell with and without the “for” loop. Now, it’s time to take a look at another loop to display the “Hello World” string i.e., while loop. This program will be quite different from both the above examples with a bit of similarity. We are consuming the same C code file. Within this file, we have updated the code and used two different methods. One is the ever known main() function from where the carrying out starts and the other is the user-defined “HelloWorld()” function. The execution starts from the main() method and the integer variable “n” is initialized to 1.

Here comes the “while” loop that will continue to execute until the value of “n” doesn’t reach out to 6. Within this loop, we have been calling the “helloworld” function and passing “n” as an argument to it. After the helloworld() function execution, the value of “n” will be incremented by 1. Within the helloworld() function, the “Hello World” string will be printed out with the printf statement along with the current increment value of loop i.e., “n”. When the “n” variable reached 5, the while loop will be ended and the main() function as well.

After saving this newly made C code with Ctrl+S, we have compiled it using Ubuntu’s gcc compiler. It was a successful process of compilation. After that, the execution has been performed and the “Hello World” string has been displayed 5 times along with its iteration number i.e. 1, 2, 3, 4, 5.

Finally! We have completed this simple C tutorial to implement the “Hello World” Program in Ubuntu 20.04 Linux operating system. We have started from the basic one and gradually increased the level of difficulty in our examples to make it more understandable for Linux users. For that, we have tried to use the “for” and “while” loops in different examples.