This tutorial explains how to use hashcat to break over 250 hash modes through different attack methods.

After reading this tutorial, you will know the most important Hashcat features and how to implement them to break hashes.

Hashcat is a very potent tool. It is worth taking it into account and learning its features. Before starting with examples, let’s see some of the hashcat functionalities, including attack types, breakable hashes, and charset settings.

Hashcat is a very flexible tool allowing the user to optimize and customize attacks for over 250 hash modes classified by categories. Some of these categories are shown in the following table.

Hashcat allows you to control charsets for brute force attacks. When brute-forcing, you can apply the following built-in charsets on each password position.

You also can specify four custom charsets combining different possibilities. You specify each custom charset by adding 1, 2, 3, and 4. For example, to specify a charset that includes 5 lower case letters and numbers, the command seems as shown below, because ?l specifies lowercase characters and ?d specifies numbers.

Hashcat customization and optimization options also include hardware device selection to various attack modes, including the explained below.

This attack results in more accurate attempts and the omission or reduction of improbable password candidates.

Getting started with Hashcat:

To begin on Debian-based Linux systems, run the command below to install Hashcat. 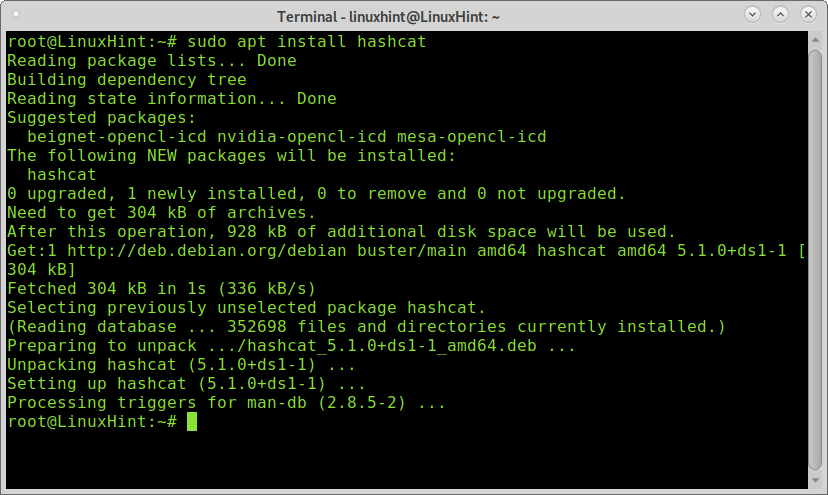 For other Linux distributions, you can download and extract the compressed 7zip file from https://hashcat.net/hashcat/.

For the first example, I will use a file called a hashlist containing two hashes and a wordlist called a wordlist.

The -m flag is used to define the hash type. The hash I want to break is MD5; it is a type 0. You can check how to define each hash type by reading the man page as shown below and scrolling down to the Hash types section. 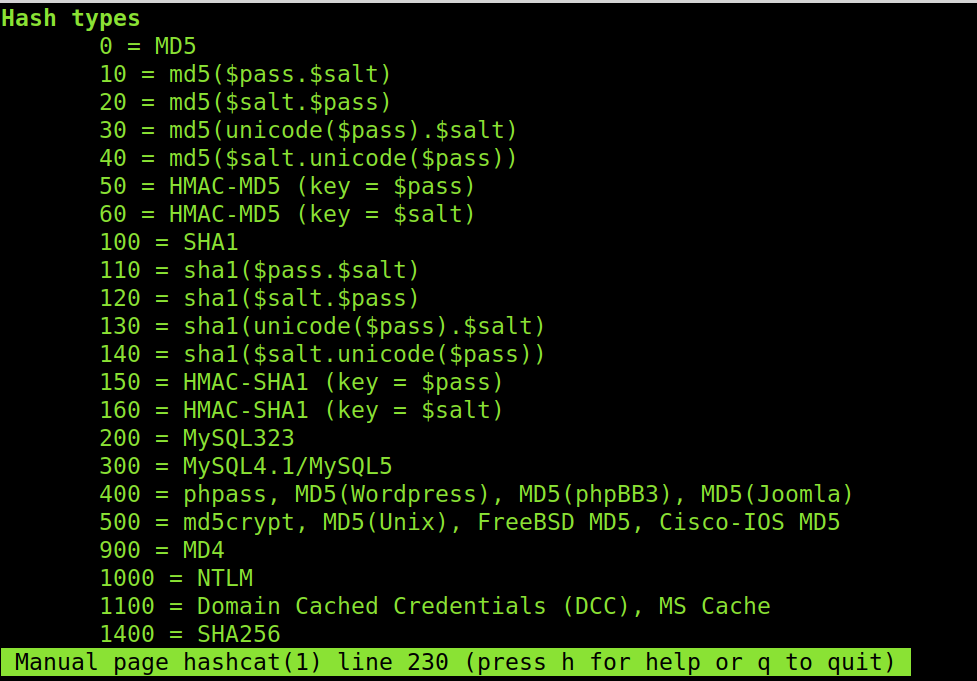 You can also learn all attack types, and how they are defined on the man page, this was previously explained in the Hashcat attack modes section in this tutorial.

The first attack example targets an MD5 hash (-m 0) using a dictionary attack (-a 0) to break hashes contained in the hashlist, followed by the wordlist. 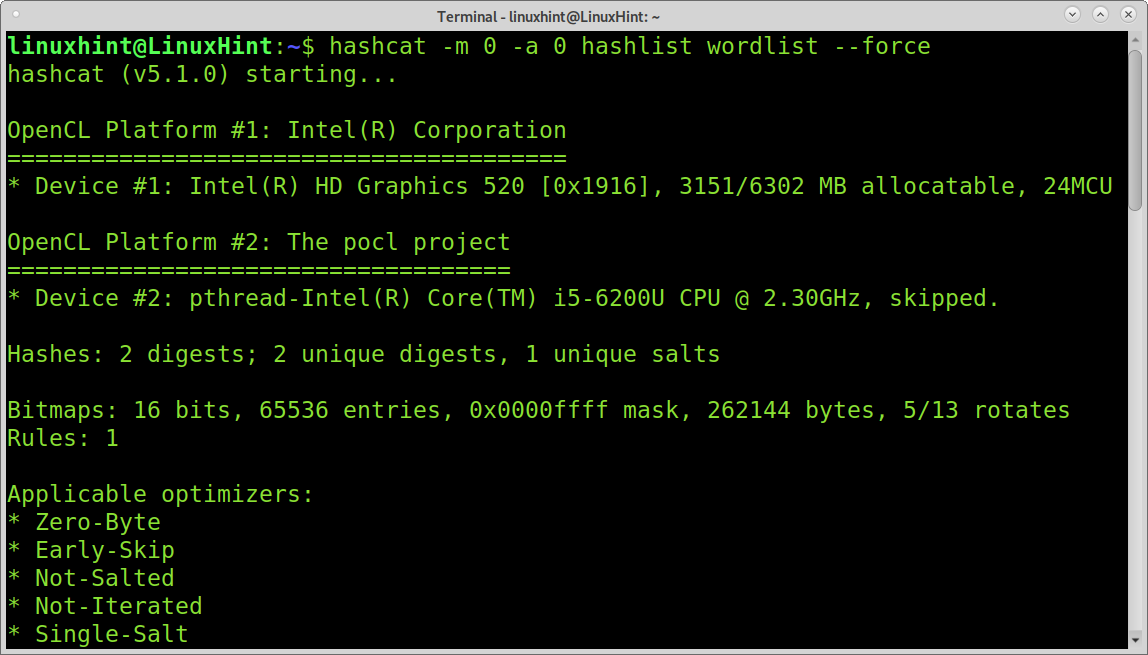 Hashcat will start running; in my case, I’m using a dummy wordlist containing the correct wordlists, thus as you can see below, Hashcat warns my wordlist is small.

Note: the hashes used in this tutorial are: 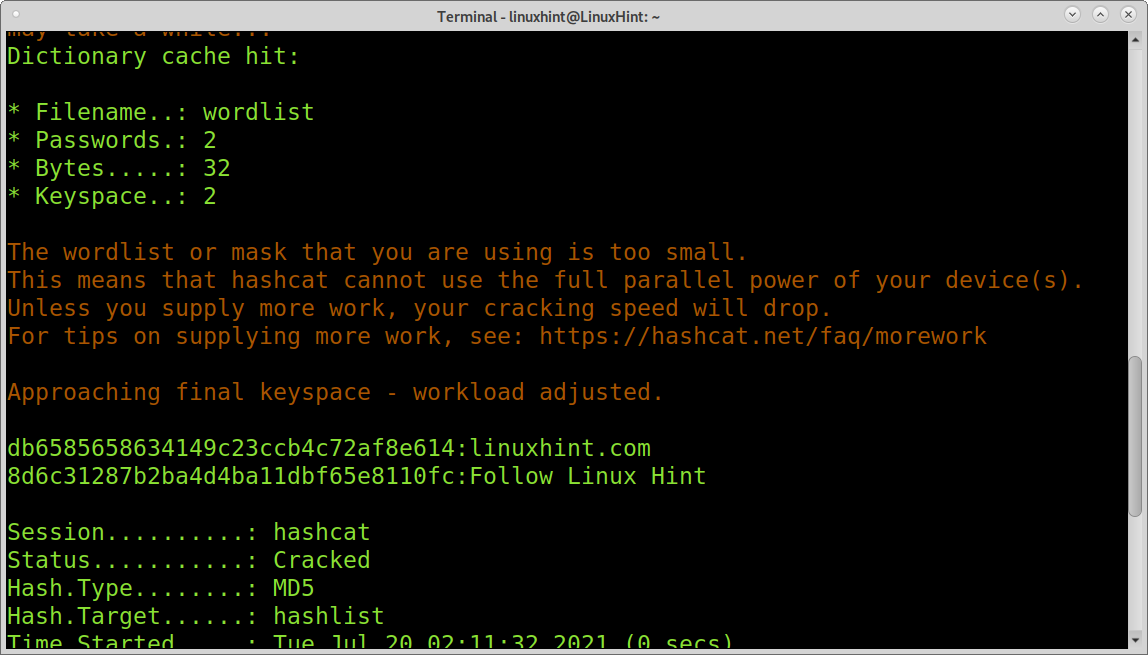 As you can see, Hashcat managed to decrypt hashes containing “linuxhint.com” and “Follow Linux Hint“.

Let’s see what happens if we run the same attack again.

As you can see before starting the attack, Hashcat informs us the result is already present in the Potfile because we already decrypted it previously.

Potfile is where Hashcat stores broken hash results; by default, the hashcat.potfile is located in the hidden directory .hashcat within the user’s home (~/.hashcat/hashcat.potfile).

In this case, you need to add the –show option, as shown in the example below.

The following example shows how to decrypt a sha1 hash. The file called sha1 contains a SHA1 hash. As you can see, in addition to a different name, the only difference is the hash mode, changed to 100 (SHA1). The attack is a dictionary attack as the previous. 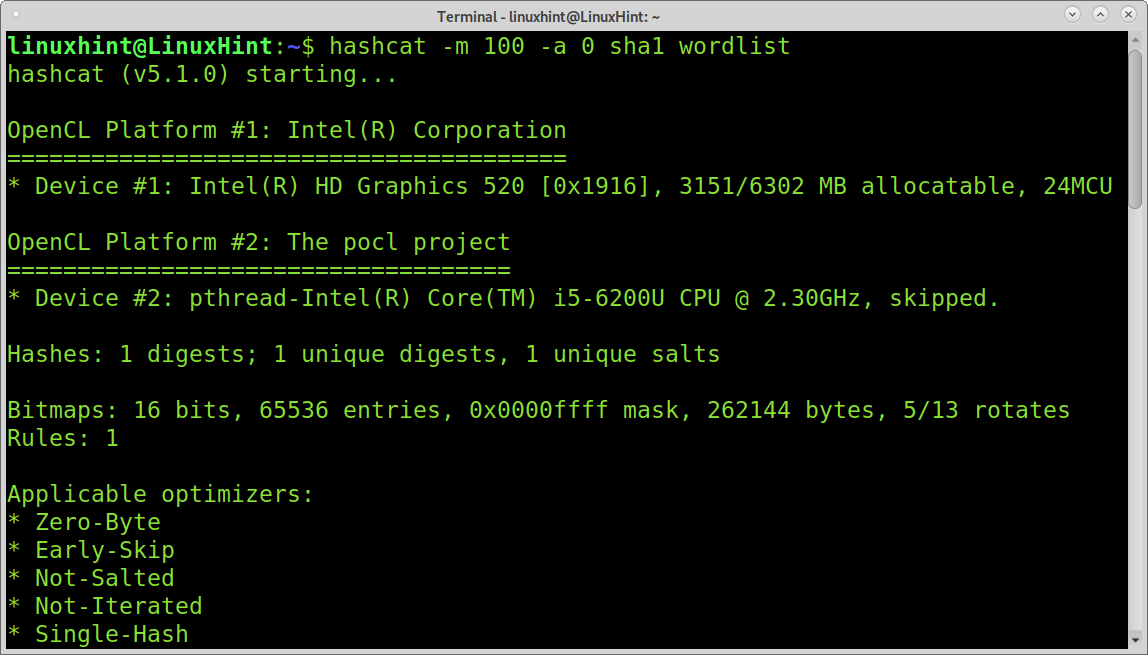 As you can see, the decrypt SHA1 hash is linuxhintpassword. 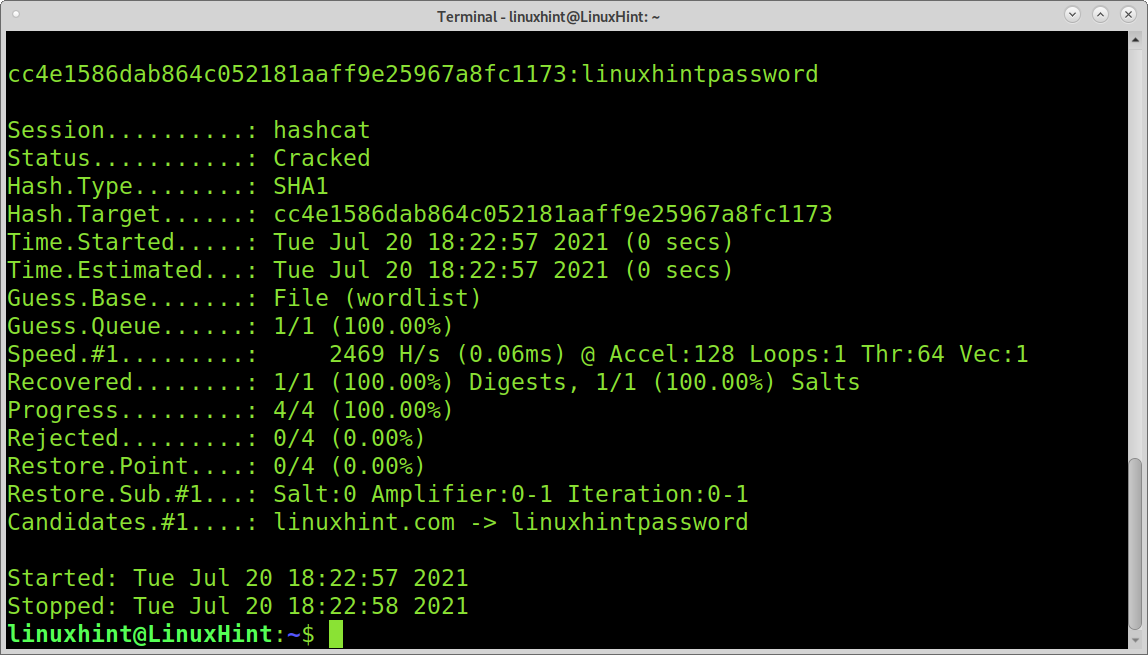 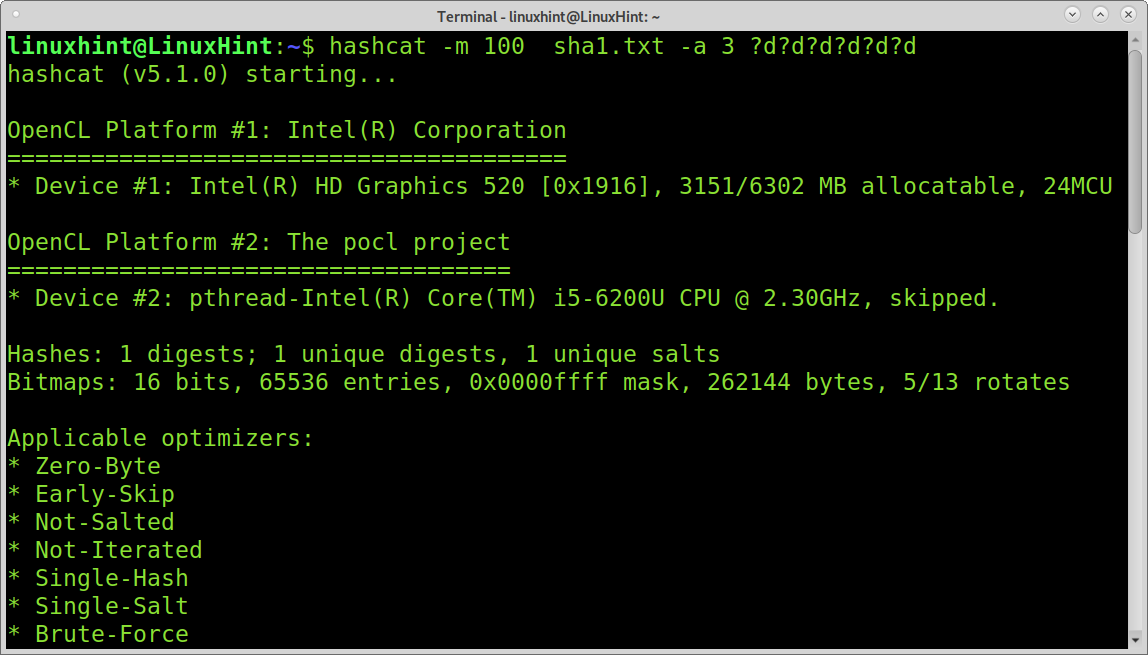 As you can see, the password 123456 was correctly decrypted. 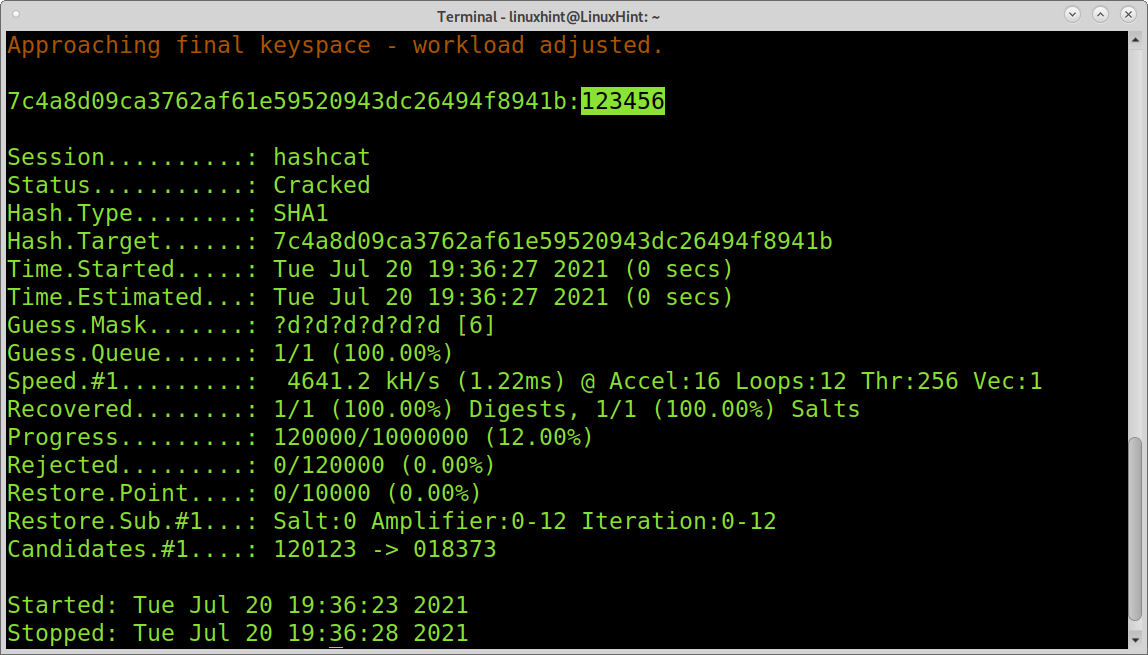 Hashcat is a simple but powerful tool to decrypt hundred hash types in a few steps. It is a multiplatform tool that can help us recover protected zip files, documents, wpa .pcap files, and over 250 different encryption modes. Its features, like mask attacks, make hashcat a smart tool to carry out intelligent attacks fully customizable by the user.

I hope this tutorial showing how to use hashcat was useful to you.