In this article, we would like to share with you a complete tutorial on Grub Boot Loader, which will be based on customizing this program according to your choice. After going through this tutorial, you will be in a very good position to customize the Grub Boot Loader just the way you want, and hence you can make the experience of seeing the boot-up process all the more interesting.

Note: To walk you through the Grub Boot Loader full tutorial, we have made use of Linux Mint 20. However, any other preferred Linux distribution can also be used for this purpose.

Before making any changes to the settings file of GRUB Boot Loader, it is highly recommended to create its backup copy so that even if you mess up with anything during the whole process, you can still revert to the default settings. But before creating a backup copy of the Grub Boot Loader’s settings file, we would like to show you how that file looks like.

Now, we will try to view the contents of the /etc/default/grub file by running the following command in the terminal window that we have just launched:

The /etc/default/grub file is shown in the image below: 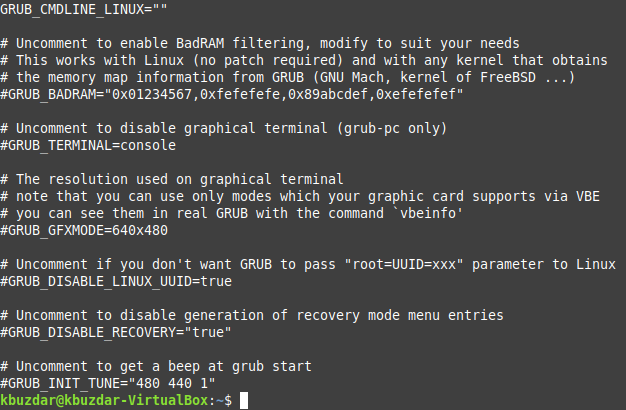 We can create a backup copy of this file by running the following command in our terminal:

Now, to verify if the backup file is an exact copy of the “/etc/default/grub” file or not, we will try to view its contents by running the command stated below in our terminal: 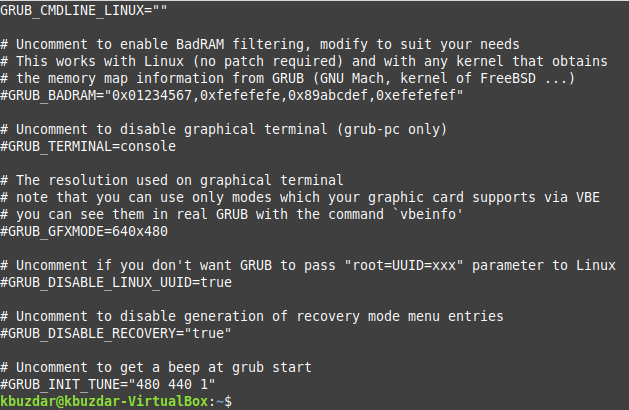 To make this happen, we will need to access the /etc/default/grub file by opening it with any text editor of our choice, preferably the nano editor. This can be done by running the command stated below in our terminal:

Since we are trying to access the settings file of Grub Boot Loader, this action requires root user privileges, which can be provided by typing the “sudo” keyword before the command mentioned above. 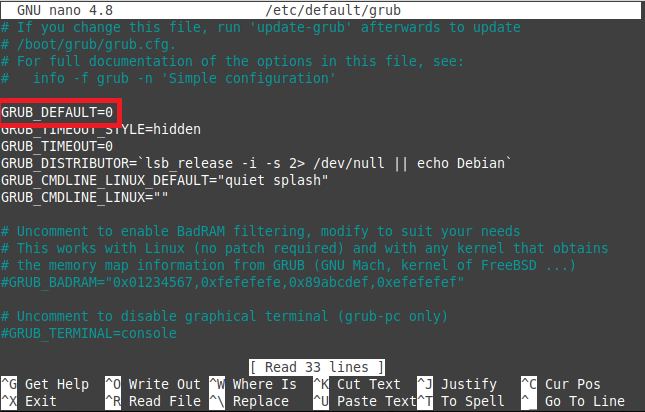 Whenever you make any changes to the /etc/default/grub file, you must update Grub for the newly made changes to take effect. This can be done by running the following command in the terminal:

Once you run this command, it will take a few seconds for Grub to update itself, after which you will be able to see the “done” message, as highlighted in the image shown below, which will indicate that your changes have successfully taken effect.

Method of Changing the Background of Grub Boot Loader Menu

The default background of the Grub Boot Loader menu looks quite dull and boring, but you do not have to worry about it anymore because you can change it any time you want. For that, we again need to tweak the /etc/default/grub file a little bit in the following manner:

For changing the background of the Grub Boot Loader menu, we have a “jpeg” image stored in our Home directory, which we want to use as the new background. You can also use a “png” or “jpg” image file. This new background image has the title BootLoader.jpeg, as highlighted in the image shown below: 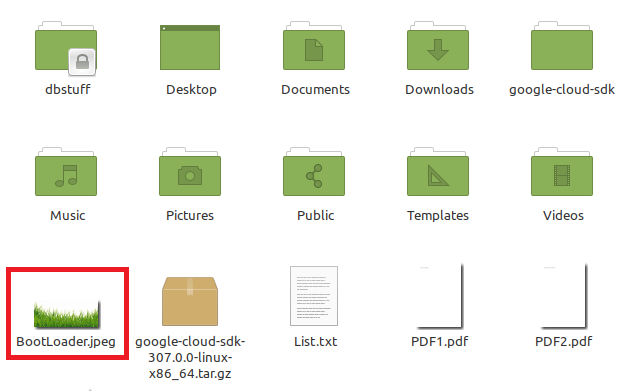 We have also opened this image to show you how the Grub Boot Loader menu is going to look like after we have made this image as its background.

Now, we will open the /etc/default/grub file once again with the nano editor by running the same command as we did in the method above. This time we are going to add a new field to this file, which is as follows:

Here, you need to replace the ImageFilePath with the actual path where your new background image resides. In our case, it was “/home/kbuzdar/BootLoader.jpeg”, as highlighted in the image shown below:

Now, save your file and close it. After that, you will again be required to update Grub so that it can read the changes that you have just made. When you update Grub with the same command that we stated in the method above, you can verify that Grub has been updated by seeing the “done” message at the end of your terminal, as highlighted in the following image: 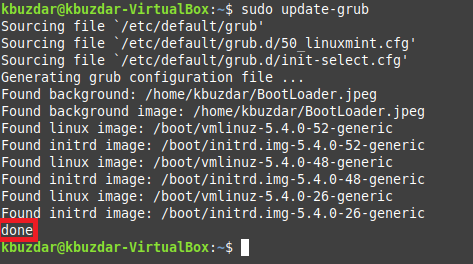 Method of Modifying the Boot Timeout of the Selected Operating System

For changing the boot timeout, we will need to open the /etc/default/grub file with nano editor yet again. This time, we will locate the “GRUB_TIMEOUT” field and assign it any value (in seconds) of our choice. For the sake of demonstration, we have set this value to “5” seconds, as highlighted in the image shown below:

Again, we will need to save our /etc/default/grub file, close it, and then update Grub so that it is fully aware of the changes that we have just made. You can verify if Grub has successfully read all those changes by looking for the “done” message on your terminal, as highlighted in the following image: 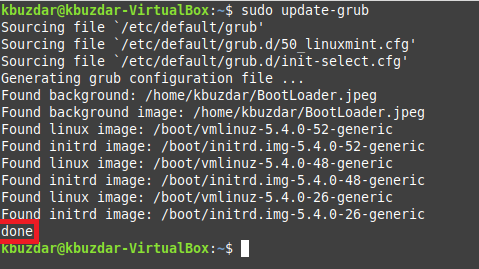 Checking if all the Changes Made Above have Taken Place

Now, it is the time to check that all the changes that we have made in the methods shown above have taken place or not. For that, we will reboot our system, and as soon as it starts, we will keep pressing the “Esc” key until we enter the Grub Boot Loader menu. When we enter that menu, we will be able to see that the background image of the Grub Boot Loader has been changed, as shown in the image below: 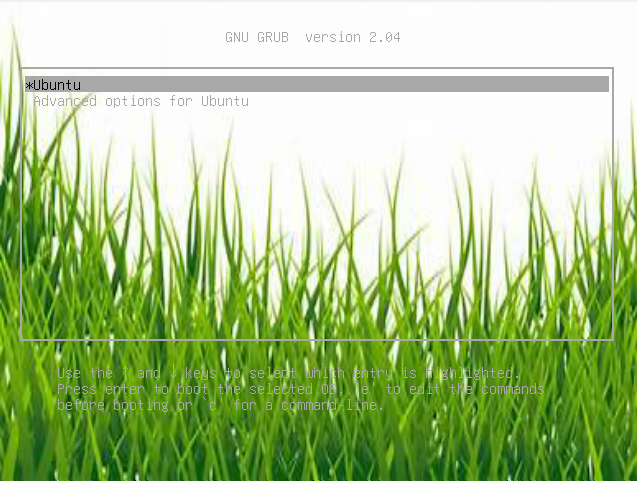 Also, the Grub Boot Loader menu appeared for “5” seconds in our case, i.e., the timeout value that we had set for this menu, after which it loaded the default operating system, which in our case was Linux Mint 20.

We explained these cases by stating the step-wise procedures to achieve all these goals. In the same manner, you can also change the other parameters of the Grub Boot Loader’s settings file. Finally, we verified if the changes that we have made to the /etc/default/grub file have actually taken place or not by rebooting our system and entering the Grub Boot Loader menu. Hopefully, this tutorial will give you a good starting point for experimenting with Grub Boot Loader on your own.