When you are working on the command-line interface (CLI) on Linux, you will often have to create/edit text files. There are plenty of text editors designed for the CLI, for example, Vim, Emacs, Nano, etc.

Linux is the kernel program, created and maintained by Linus Torvalds. However, the kernel itself is of no use. The other pieces of software that sit on top of Linux are what make up the entire, functional OS. Most of the Linux distros use the software provided by the GNU Project to complete the OS.

Nano is a text editor that is a part of the GNU system. The GNU system, developed and maintained by the GNU Project, is a complete operating system that is free and open source. Interestingly, almost all current Linux distros are just a portion of the entire GNU system. That is why Linux is also referred to as GNU/Linux.

As you may have already guessed, your system should already have Nano installed. If you do not have Nano installed, it is available on all Linux distros directly from their respective package servers. In most situations, the package name will be nano.

Depending on what distro you are using, run the appropriate command in a terminal.

For Debian/Ubuntu and derivatives, use the following command:

For Arch Linux and derivatives, use the following command:

For Fedora and derivatives, use the following command.

If you are feeling adventurous, then try out this method instead. We will be installing GNU Nano from the source. While this is a fun thing to do, the downside is, your package manager cannot manage it directly. Moreover, if there is an updated release, you will have to re-download the source, compile it, and install it again.

If you do not have curl installed, then you can use wget as well.

For the next part, you will require some building tools, such as the GNU C/C++ compiler. In the case of Debian/Ubuntu, you will need to install the build-essentials package group. If you are using an Arch-based system, then install the base-devel package. If you are running other distros, please do your own research on these distros, first.

Once the required tools are installed, run the following commands.

Once Nano is installed, it is time to use it. From a terminal, run the following command.

This will start the Nano editor with a blank text file.

Have you ever been to Vim? Then you may be familiar with the “can’t exit Vim” meme. Well, in the case of Nano, there is nothing complicated like this, at all. Press <Ctrl + X> to exit the Nano editor.

To create a text file at a specific location, use the following command structure. Be sure that the current user has write permission to the target directory.

For example, I will create a text file with the name demo.txt at the location ~/Desktop.

As the demo.txt file does not exist, Nano will open a blank text file. The file is not created yet, and will be written once you save the file.

Once you have made changes to a text file, save the file by pressing <Ctrl + O>.

Nano will ask for the file name. In most cases, you just hit Enter. If you have edited an existing file, then you should probably not change the file name. If you do, Nano will save a new file with the new name and the newly edited content.

Once the file is saved, you will see the success message.

Nano will also ask you to save if you are about to close the editor without saving the edited file.

To edit an existing file, use the following command structure. Note that this method is quite like the method of creating a new file with Nano.

This is a common feature offered by most text editors. Nano also has a simplistic yet handy search option. To search for a specific term, press <Ctrl + W>.

Nano will pop up the search function. Enter the search keyword and hit Enter.

Nano will jump the cursor to the search result. If there is more than one same term, you can press <Alt + W> to go to the next search result.

Enter the term to replace. Next, enter the replacement value.

Deleted the wrong line by accident? Pasted the content in the wrong place? Undo and redo are here to save you!

As you can already tell, all the functions of Nano are directly accessible through the keyboard shortcuts. Mastering the shortcuts is the best way to take full advantage of the Nano editor. On the screen, Nano shows a handful of keyboard shortcuts.

To get the list of all the supported keyboard shortcuts, press <Ctrl + G>.

You can also check out the Nano main page. The main page offers an in-depth explanation of all the command arguments.

Nano is not just a plain and simple text editor. This program can also be enhanced with colors. Syntax highlighting is a common feature among text editors. There are numerous syntax highlighting functions available for Nano. In this example, I will showcase some Improved Nano Syntax Highlighting Files from GitHub. 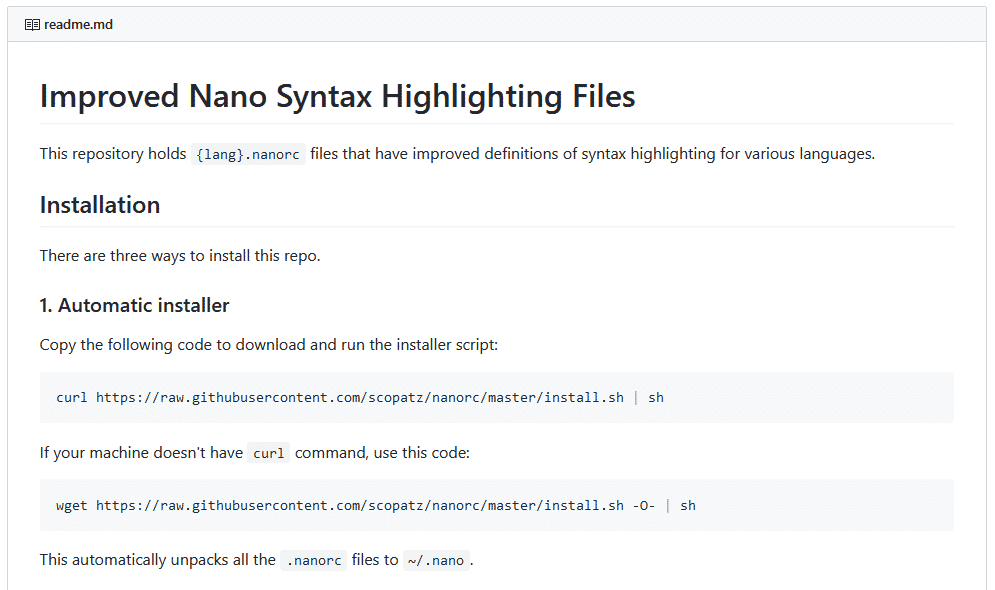 As the tutorial says, run the following command to install syntax highlighting for Nano.

If you do not have curl installed, then wget is also available.

The feature will download and locate a bunch of .nanorc files at “~/nano” directory.

Nano is an awesome text editor that offers just enough for your everyday needs. However, if you are an advanced user in need of some really advanced functions, then check out Vim. Vim is arguably one of the best editors of all. Get started with Vim in this Beginners’ Guide to Vim.