Git is a freeware distributed source management system that can handle everything from small to very large projects. Git is a software program that lets you keep track of changes to any set of documents. It’s often used to coordinate work between developers who are all collaborating on the same source code during the development of an application. Efficiency, the integrity of the information, and compatibility for extended, non-linear processes are among its objectives.

This article will be demonstrating the use of login instructions on the Kali Linux shell to perform push and pull transactions from the console.

Let’s get started with the setting up of Kali Linux on Windows 10. Tap on the downloaded file of Kali Linux at the Microsoft store and a black window will be opened on your screen. If you are utilizing it for the first time, it may ask you to add a new username. We added the name “Kalsoom” as a new user to our Kali Linux system.

After that, it will require setting a new password for a newly created username. So, add a new password and retype it on the black screen when asked. The user will be created successfully and the kali Linux will be installed properly on your end. The console for admin user “Kalsoom” will be generated as shown below.

Make sure to update your Kali Linux first. This is the most elementary step in any smooth installation process. So, the apt-get package is used to update the Kali Linux with the “update” keyword.

You need to install Git on your Kali Linux operating system before using any commands on its console. We will be using the very same “apt-get” package of Linux to install it with the ‘install” keyword followed by the tool name “git”. It will start collecting needed information.

While processing, it may require you to affirm your action to install the tool i.e. git. It will show you the amount of space it will use on your Kali Linux along with asking the question “Do you want to continue?”. Tap “y” from the keypad and press Enter to continue its installation.

All the required repositories of git will be started to download and it may require some time.

After all the packages have been downloaded, you will get the below-shown output “Fetched”.

After that, all the downloaded or loaded packages of git will be installed and git will be ready to configure and use in our Kali Linux operating system.

You need to install the git-related repositories required for proper git working on Linux. You need to use the shown below instruction to continue.

Configuring your git identity and email account is among the first tasks you should do after adopting Git. Each transaction you do in Git is associated with your name. Execute the shown “config” instructions to configure your global contributor name, email address, and password.

The “user.name”, “user.email” and “user.passwd” options were used in the config command to do so. We have given the name “kalsoom” to our git user. These configurations can be used globally as per the “—global” option used in the command.

You can see a list of configurations for your git on Kali Linux using the shown below git config command with the “—list” option. The newly created user, email, and password will be displayed on your Linux console screen.

Now, you must have a GitHub account on the GitHub platform as we have shown in the image. We have a public project named “New” which will be used to perform pull and push operations from the Kali Linux platform. It contains 2 files right now.

Within Kali Linux, we have to clone the remote “New” repository so that we can make changes to it and commit them as well. Use the clone “URL” from the GitHub project and use it within the “git clone” instruction as shown below. All the files and folders from new will be cloned.

After using the list instruction, we have found that the “new” project has been cloned well.

You need to initialize a new git repository using the “git init” instruction on the console.

You can check out the status of git using the “git status” instruction. It shows that we haven’t made any commit instructions yet. 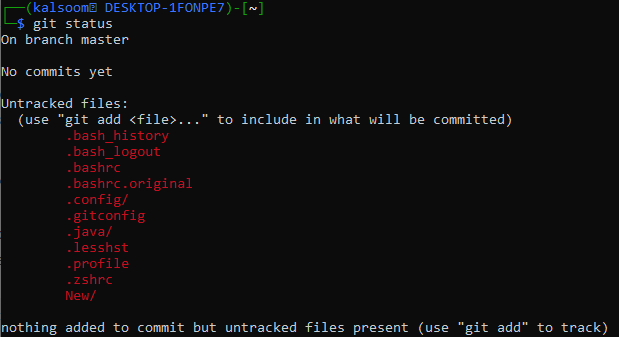 On using the “git log” instruction, we have seen the information regarding the first commit.

You can see that the output and commit has been reflected in the remote “New” repository.

We demonstrated the installation and configuration of a git on Kali Linux along with the cloning of a remote repository on it. We also explained how a user can commit and push files and folders from the Git console on Linux to a remote repository using the login credentials.