A folder is referred to as a directory. When working within Bash and utilizing the Git version control system, changing the directory is crucial because you always travel between several folders. There are two ways to modify the directory:

In this tutorial, we’ll look at how to change the current working directory in git bash using bash Linux commands on Kali Linux. The cd command in Git Bash allows you to move within the directories, probably from the current directory to another directory. The command “cd” means “change directory.” The cd command can be widely used in any Linux system’s shells (cmd) for the same purpose. Before using the “cd” instruction, we need to find out the current working directory of our system using the “pwd” instruction as shown.

We’ll change the current directory from “/home/Linux/” to the “works” folder in the example below. To navigate our desired destination directory, we have been utilizing the keyword “cd” in the command line followed by the directory’s name, i.e., works. This moves us within the “works” directory. Using the “ls” instruction, we learned that it contains a text file and a folder project1 in it. If we want to move within the project1 folder, we have to use the same “cd” instruction as shown. While in the “project1” directory, we have used the “pwd” command to display the path of this current working directory. 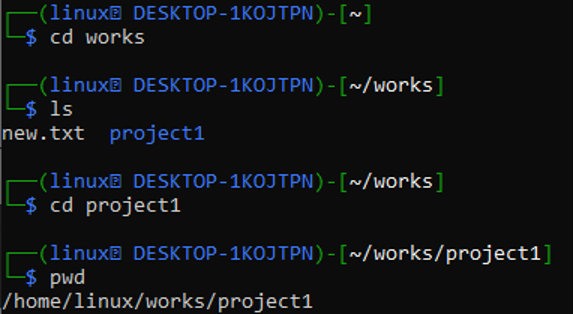 The “cd” command can be used to move back toward your home directory again when you are currently at another location, i.e., “works.” If you’re going straight to the home directory/folder, this command will come in handy. The first line reveals that we used the cd (change directory) command without specifying a directory name.

Example 4: Move Back to Git Folder

To return to (or forward to) the previous directory/folder, you can also use the “cd -” instruction. If you accidentally browsed to the wrong directory, this command will be very convenient to use. We were previously in the works directory, so instead of typing the command with the whole path, we used the (cd -) command to return to it. Following the execution of this command, the operating system brings us to the works folder, as shown.

We can travel numerous levels back using the “/” sign in the “cd” command after double dots, just like we used the simple “cd..” instruction to move back. The levels we want to move back are determined by the amount of dots (.) and forward slashes (/). Make sure to double-check that the number of levels provided in our command is correct.

Simply input ‘cd’ at the instruction area along with the exact path to the directory to jump to the desired directory. We should use the path inside the quoted symbols, e.g., “/home/Linux/works/project1”. If no directory is detected, you may receive a directory not found error. See the example below for an illustration.

By using the cd command and the whole path of the directory, we can navigate directly to our home directory, which is “/home/Linux/” as per the output below.

In this article, we have learned what a directory is and how to switch from one git directory to another via bash commands. We looked at several ideas as well as a real-world example of how to put them into exercise. While operating any other Linux or UNIX-like operating system other than kali Linux, the change directory command is equally useful.