Mini-PCs have been gaining popularity in the consumer and enterprise market. Unlike the traditional form of desktops, mini-PCs can be tucked away almost anywhere, saving more space. It’s also lightweight and as portable as mobile devices; carrying it around is not much of a hassle.

PC manufacturers have been releasing their own versions of this inconspicuous desktop, giving consumers an option of ready-to-go computers or customizable kits. Even the Taiwanese motherboard manufacturer, Gigabyte, followed suit with Brix, integrating hardware components into their miniaturized motherboards. There are currently two types of Brix, the Mini-PC System, which is ready to use, and the Mini-PC Barebone, which is the customizable version.

Brix mini-PC systems are already complete with Windows Pro OS, RAM, processor, graphics card, and storage drives. Intel’s line of processors, from Celeron to Core i7, is at the core of each mini-PCs performance. It’s loaded with multiple USB ports, including the latest iteration, USB Type-C. There’s also the multifaceted Thunderbolt 3, HDMI for displays, and Gigabit Ethernet port. It’s also equipped with Intel dual-band wireless card and Bluetooth 4.2. Storage-wise, it supports both M.2 SSD and HDD, with most models having a slot for each. The HDMI and Thunderbolt 3 allow multiple display connections at the same time. Up to 4K videos can be played, with graphics from prominent manufacturers like Intel and nVidia. 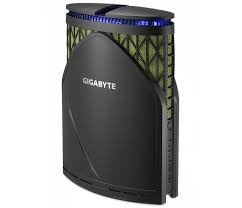 Among its line of mini-PC’s, the Gaming GT series is what stands out the most, although we don’t really see recent iterations already. Unlike most mini-PCs, Gigabyte’s gaming platform has a unique tall and sleek chassis, measuring 276x384x128 mm. The green, web-like accent on the upper half of the chassis gives it an edgy look. Another cool thing about it is the automatic exhaust fins on top that automatically opens up when the CPU reaches 80-degree Celcius. Adding a more futuristic feel is the ring of RGB LEDs on top, just below the exhaust fins. Users can play with its three modes: beat, pulse, and still, which can be set through the Gigabyte Ambient LED App.

Internally, the nVidia GeForce GTX 8GB graphics card, Intel’s Core i7 processor, 16GB of RAM, and ample storage of 240 GB SSD and 1TB HDD all drive the stellar performance that this PC can provide. The air-cooling system is brilliantly designed to ensure that the components do not heat up when the hardware components are taxed.

The Brix Gaming PCs performance is already incredible and the chassis is distinct, but considering that the i7 generations used are already aging and more advanced ones are already emerging, users are surely hoping that Gigabyte release another series equipped with the latest hardware.

Gigabyte’s barebone kits do not include the operating systems, RAM, and storage, giving the users the freedom to choose the components they need according to the performance they want.

It is suitable for home and business users. The latest models have two sizes to choose from: the slim and the HDD, understandably, it speaks about the type of storage the model supports. Some models have slots for both. There’s a broad range of processors to choose from, from Intel Celeron to i7 and AMD Ryzen 4000U series. There are two slots for SO-DIMM DDR4 memory modules, with some models supporting up to 64GB. It also comes complete with ports, with up to 7 USB ports including Type-C, HDMI, mini DP port, and Ethernet port. It’s also equipped with a Wi-fi card and Bluetooth. Up to four 4K displays can be connected simultaneously, except for lower-end models, which can support at least two. 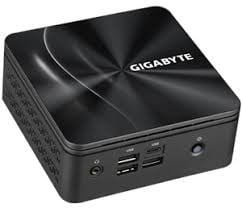 It features graphics cards and processors that are fit for gaming. Unlike the mini-PC system chassis, the barebone gaming chassis are either rectangular or square. Of the 11 units available, only GB-BXA8G-8890 houses an AMD processor and graphics card. The rest feature either an Intel i5 or i7 processor and an nVidia GeForce graphics card with selections from GTX 760 to GTX 1060. There are two SO-DIMM DDR4 slots, multiple USB ports, multiple mini display ports, and an HDMI port. For connectivity, there’s Intel Dual Band Wi-fi Card and Bluetooth 4.2. The rectangular models have two M.2 SSD 2280 slots and support two 2.5” HDD/SSD as well, while the square ones support 2.5” HDD and include one mSATA SSD Slot. 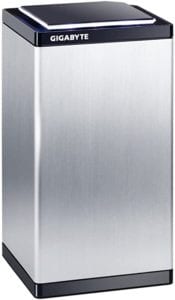 Brix Pro is designed for enterprise users but can also be used by home users with high demand for performance. The most recent releases have nothing but the latest features. Powering the high-level performance are 11th Gen Core i7 processor, Intel Xe Graphic, two Dual Channel DDR4 SO-DIMMs at 32 MHz slots, which can support a total of 64GB max. It’s also packed with six USB 3.2 ports, four HDMI ports, and the latest Thunderbolt 4 port. It’s also equipped with the latest technology of Intel Wi-fi 6 and Bluetooth 5.1. To keep the data safe from cybersecurity threats and physical theft, Gigabyte embedded the Infineon TPM security chip onboard, although it’s only available in certain countries for now.

Earlier releases are still available but it has lower-end Intel processors, graphics cards, Wi-fi cards, and Bluetooth versions. They also have fewer ports, but can still support multiple displays. There are two models with AMD Ryzen processors and integrated AMD graphics. Earlier releases do not include the TPM security chip. These are still fast enough for users who only require moderate performance.

Brix IoT are fanless mini-PC’s built for the Internet of Things, hence the IoT. Unlike the other Brixes, this is designed for embedded applications and suitable for kiosks, POS systems, digital signage, and the like. Four models are available to date. Two high-end models feature a 7th gen Intel Core i3 processor, two slots for SO-DIMM DDR4 memory supporting up to 32GB max, M.2 SSD 2280 slot, and a Micro SD card slot, though this was eliminated in GB-EKi3A-7100. The lower-end models feature quad-core Intel Celeron and Pentium processors, two slots for SO-DIMM DDR3L RAM, M.2 SSD 2280 slot, optional eMMC, and Micro SD card slot. 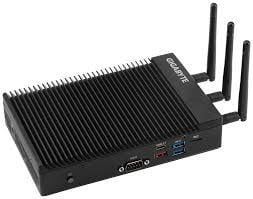 It is a mini-PC and video projector combo that comes in handy for business users. The components are at the lower end, but the projector function makes this tiny box versatile. It houses a 4th gen Intel core i3, two slots for SO-DIMM DDR3L RAM, Wi-fi card, Bluetooth 4.0, mini PCIe x1 and mSATA expansion slots, four USB 3.0 ports, and HDMI-In port. It supports dual-display with one HDMI and one mini DisplayPort. On the projector side, it features DLP technology that supports WVGA and offers a resolution of 864×480. 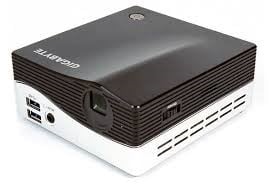 Gigabyte has a long list of mini-PCs available, and there are still a lot of grounds to cover, but hopefully, the brief overview of the different platforms discussed here can help you decide which one suits you right.