Syntax of the getopt 3 Function in C Language

We have an integer “int” named “argc”. The “char” is named “const argv [ ]”, which is an array, and also the “const char” named “optstring”. This optstring is only a series of characters, each of which stands for a single option.

In this article, these given examples are executed on Ubuntu 20.04. Therefore, to execute this, Ubuntu 20.04 have the GCC installed. After installing it, we’ll write some code in our C programming language to show you the working of the “getopt()” function. Here, we are writing codes in the text editor of Ubuntu 20.04. First, we first add several header files to the code provided below, such as “<stdio. h>,” which is used for printing on the screen.

Then, we have a “switch” statement in which we pass “opt” as the parameter. Then, we have different cases. It checks these conditions if the first case is not satisfied, then it moves to the next case. If the case is true and satisfied, then the statement inside this will be executed and we have the “break” statement. We have the “printf” statement inside all these cases of the switch statement. In the case of “l”, “h”, and “m”, we put the “printf” statement which prints the “character” on the output screen. In the case of “f”, it prints the “filename”.

We put the “:” at the start of the string so that it can easily distinguish among “:” and “?”. If there are no more alternatives to the process, the result is “-1”. The “?” is displayed when an option is not recognized and is stored in the external variable optopt. The getopt typically returns if an option expects a value (like -f in our example) but none is supplied. We also have the “for” loop which is here for the extra arguments that are not parsed. In the “if” statement, we have the “printf” statement which is used for printing the given statement on the terminal screen.

Here is the end result of the overhead script, and you will see how this function works here. We get this output by typing the commands, which are shown in the following screenshot:

Here, we have another example in which we utilize the header files. The header files we use here are “stdio. h” and “getopt. h”. For both reading and writing characters to files, the “stdio. h” header file is utilized. We have the “int” type “main” function where we pass two parameters as “int” and “char” data types. 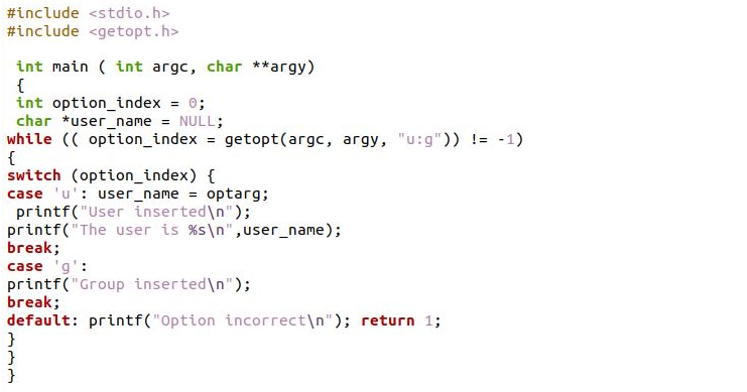 Below this, the output of the second example. The previous code gives the output which is shown in the following screenshot: