UEFI stands for “Unified Extensible Firmware Interface“. In the late 1990s, Intel started UEFI as its team was already working on a 64-bit processor. The legacy “BIOS” mode can only operate in 16-bit mode and cannot utilize the features of new processors, while “UEFI” can operate in both 64bit and 32bit mode. UEFI offers faster boot time, discrete driver support, and drive size up to 9 zettabytes compared to the other boot modes. This write-up will show you how to get UEFI firmware settings in Ubuntu. Moreover, the procedure of installing and booting Ubuntu with the UEFI boot mode will be provided to you. So, let’s start!

If you want to check that your system has 32 or 64-bit UEFI firmware, then open up your Ubuntu terminal by pressing “CTRL+ALT+T” and execute the below-given command:

Check if Ubuntu is installed in UEFI mode

There are two versions of the Grub boot manager in Debian-based Linux distributions such as Ubuntu; one is “grub-efi” and the second is “grub-pc“. If your Ubuntu distribution is installed in UEFI mode, it will have “grub-efi” as boot manager. To confirm these settings, write out the following command in your terminal:

For BIOS, “grub-pc” works as the default grub boot manager:

You can also install the “efibootmgr” package to confirm if you are using UEFI or BIOS on Ubuntu: 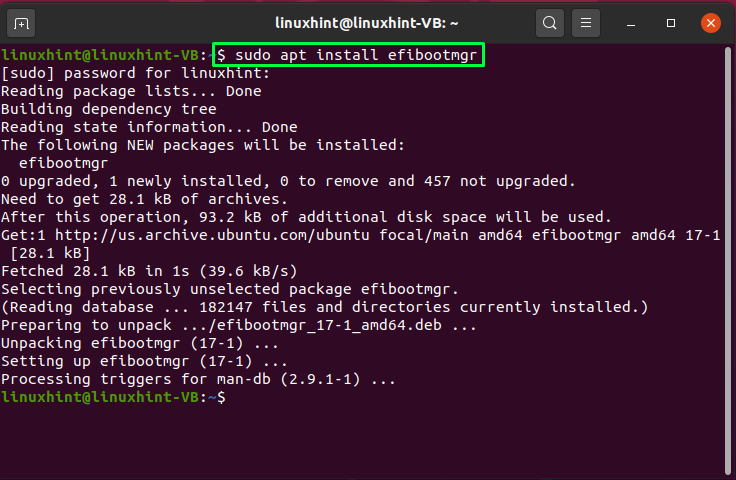 Now, run “efibootmgr” through the terminal, and it will let you know about the UEFI status on your Ubuntu system:

Check if Ubuntu is booted in UEFI mode

If your Ubuntu is the only distribution operating on your system, whether you booted or installed it with UEFI mode does not matter. However, suppose other operating systems such as Windows or Linux distros are installed by utilizing the UEFI mode; in that case, you should go for the installation of Ubuntu on your system through the UEFI mode.

Here are some instructions that can assist you in installing Ubuntu in UEFI mode:

In the next step, write out the following command to verify if your system boots from the Hard drive or is not in UEFI mode:

If you see “Legacy boot on HDD” as an output, then it signifies that either the BIOS is configured to boot the Hard disk drive or BIOS itself is not UEFI type:

After knowing the system boot’s current mode, you can configure the UEFI firmware setting at your system startup. For this purpose, restart your system and press F2, F8, F10, or the desired key of your system to change the boot settings. Look for the “Boot Order” or “Boot Mode” parameter in the available list. From there, you can specify the boot mode to “UEFI”.

Now, start the installation procedure of Ubuntu with the UEFI firmware. For this purpose, click on the “Erase disk and install Ubuntu” option if you only want to use Ubuntu. Otherwise, you can install it using the manual partitioning option. In such a case, specify the mount point as “/boot/efi” in the UEFI partition, and if you do not have one, you can create an EFI system partition with the help of Gparted.

While creating a UEFI system partition, specify the mount point as “/boot/efi”, size “100 or 200MiB”, type “FAT32,” and also add a “boot” flag. If you have followed all of the previous given instructions, then congratulations! Now you can install Ubuntu with the UEFI firmware boot mode.

If your Ubuntu system is accidentally booted with the legacy, CSM, or the BIOS boot, then no worries! You can use the “Boot-Repair” tool to convert the current mode of the Ubuntu system into UEFI. To do so, open up the “Boot-Repair” application, select the “Advanced options”, and click on the “GRUB location” tab. Then, in the “GRUB location” tab, you will see a “Separate /boot/efi” partition checkbox; mark it and hit the “Apply” button. After this, open up your system BIOS settings and configure the boot mode of Ubuntu to UEFI.

By utilizing UEFI, you can build a connection between an operating system and a computer’s firmware. When a system boots, UEFI boot mode is utilized to initialize the hardware components and launch the operating system stored on your HDD. UEFI has several additional features that are not available in BIOS, and it is intended to replace BIOS eventually. This write-up was all about how to get UEFI firmware settings in Ubuntu. If you have not installed or booted your Ubuntu system with the UEFI mode, then follow the installation procedure provided in this post.