In general, thread synchronization primitives necessitate the use of system calls by userspace programs. The system call is inherently inevitable for placing a thread to sleep and waiting for another thread or waking up a thread from sleep. Obtaining an uncontended lock, for example, does not necessitate a system call, at least not naturally. The futex is the remedy to this challenge. A futex is simply an instantaneous integer address. The address is used to identify a queue of threads that are waiting to be processed. The value of the integer at that location is utilized to execute the fast path with atomic operations if available, as well as to handle corner case race situations in the event of a conflict. The futex() system call allows a program to wait for a value at a particular address to change, as well as wake up anyone waiting on that address. It is most commonly used to implement the debatable case of a shared memory lock, as mentioned in futex (7). When a futex(7) action in userspace fails to complete without error, a call to the kernel is required to resolve the issue. Arbitration can be used to either put the calling process to sleep or to wake up a waiting process. The semantics defined in the futex is expected to be followed by callers of this function (7).

Because these semantics require authoring non-portable assembly instructions, most users will most likely be library authors rather than ordinary application developers. Futex is a single system call that performs many operations. That may appear strange, even perplexing, if not downright. That is, nevertheless, standard procedure for a one-of-a-kind system call: the “ioctl” system call contains considerably more operations than futex. For another instance, programmers are unlikely to discover because Glibc hides it, although the single socket call system implements all socket-related functions. As a result, if threads access it in a single process, it can be specified as a global variable or stored in a shared memory segment if threads from various processes utilize it. A state updated in userspace using atomic operations is stored in the shared variable. There is no need for a system call when the state says that there is no conflict. If the condition indicates a contention, on the other side, a futex system call is made to put the calling task to sleep.

You can confirm the successful execution of the file only if you get the GNU nano editor on your screen. Now you have to write the code displayed in the attached screenshot. This is one of the most basic examples of futex() system call. 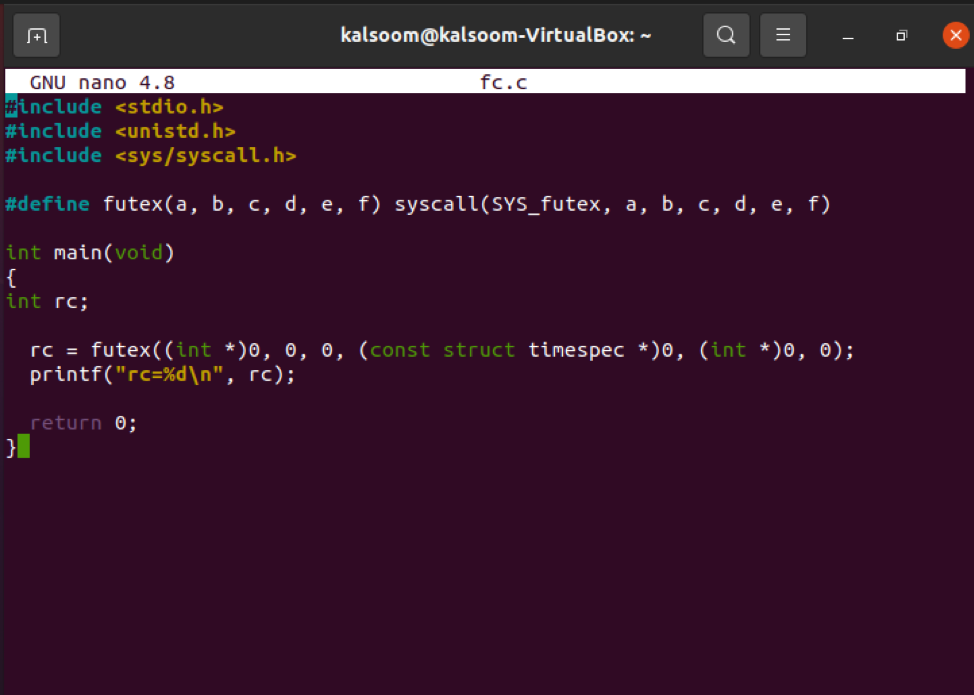 < STDIO. H > is a file containing declarations for various functions and macros that are required to receive input from inputs and display output on the C program’s output window. It is unnecessary to add “stdio. h” because we can provide input to the c program using any other program, such as DOS, and store results. The <unistd. h> header provides and declares a variety of symbolic constants and types, as well as a variety of functions. syscall() is a tiny library function that calls the system call with the requested amount of arguments and the given assembly language interface. Once you understand the above-displayed code, you are ready to check the output. We have installed a GCC compiler for the compilation of code. The GNU C Compiler, or GCC, is the most famous and extensively used compiler among programmers who use C as their programming language. GCC is an accessible compiler that comes with all Linux distributions for free. Now execute the appended command in the terminal of the Ubuntu 20.04 Linux system.

The output can be seen in the above-attached image.