If we desire to define a function before calling the strategy, utilize its function declaration or prototype which informs the compiler that we will use the function with the name stated in the prototype at a certain juncture in the programming language. As a consequence of this, the assembler can convey some more consistent leading choices. The descriptor configuration is done initially in a function prototype, followed by the keyword function, then the function name. You can pluck the function header from each of your function definitions by adding a semicolon (;) and placing the prototypes in a header. Then, include that header at the beginning of each processing unit in your program.

In this article, we will discuss a declaration of a function named “prototype function” which tells us to be concerned with the type of value returned by the function and arguments along with their types. One immensely helpful dimension of C++ functions is the prototyping function. A function prototype presents insight that includes the number and nature of parameters and the type of return values to characterize the functional interface to the assembler.

A semicolon must abide by the function prototype at the final point. The tool we that we use to discuss the “function prototype” is “Visual Studio Code”. It minimizes the return-type error for the data that the function emits. It reflects how the several factors were delivered to the function, and indicates the data types including each passed input. If there is some flaw in the code, we fix a prototype bug by putting the entirety of your user-defined function before the core functions, then establishing a function prototype before maiming after the CPP headers.

The code ownership is handed to the function definition when the compiler commences a function call. When the return statement or closing braces() are approached, the compiler then executes the instructions within the function’s body and programmed control, then returns.

Example 1: Describing the Addition of Two Simple Functions with the Return Statement

To display something on the output screen, we use the “cout” command in CPP. So, we print the “Addition Value” along with the value that is stored in the variable “g”. Apply the prototype function. It declares again the integer data type name “add” and store the variables “m” and “n”. We store the sum of variables “m” and “n” on our newly integer data type declared variable “k”. Simply return the variable “k” using the “return” statement and return to the main program value received by “g”. This whole respective code explains the prototype function by adding two simple functions. 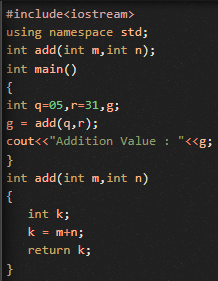 The output simply displays the sum of “5” and “31” that are stored in variables “q” and “r” along with the “cout” statement in which we assigned to print as “Addition Value” which is “36”. It can be seen on the output display.

We declare our user-defined void function as “DisplayNumber” to store with two parameters in it which are “val1” and “val2”. The use of the user-defined functions makes the code reusable, consolidates the program, and enhances readability. Our parameter “val1” is an integer data type while “val2” is a float data type as it has the capacity of storing the decimal place values. After that, we use two “cout” statements along with the display message of “The Parameter int Number is” and assign it with the parameter of the integer data type “val1”. For the float parameter, we also use a “cout” statement along with its message and assign the parameter of “val2”. 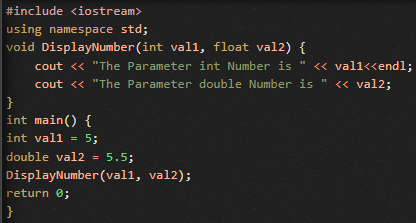 The output simply displays the data values of both parameters of “val1” and “val2” stored values which are “5” and “5.5” along with the “cout” display message.