Let’s start our first example to see how function overloading simply fails in C language. We have to utilize the “touch” instruction within the terminal shell to create a new C-type document. To open this new file, you need a file editor. We have been utilizing the “GNU Nano” editor to open it.

Execute the following affixed instructions to get started.

After launching the file in an editor, we have included as we have defined two user-defined standard input-output headers. After the header, we have defined two user-defined methods with a similar name and different parameters, i.e., “cal”. The first user-defined method, “cal” takes 1 argument of integer type, while the other “cal” method takes two arguments of integer type. The first function has been simply multiplying the passed integer value with itself and saving it to another integer type variable, “t” that has just been initialized. 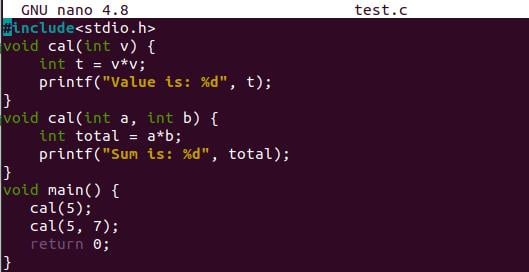 Save this code and exit the file. Use the “GCC” compiler package to compile the code and see the function overloading errors. The command has been given in the image output below. You can see that compiling this file throws a lot of exceptions due to the same name of functions. 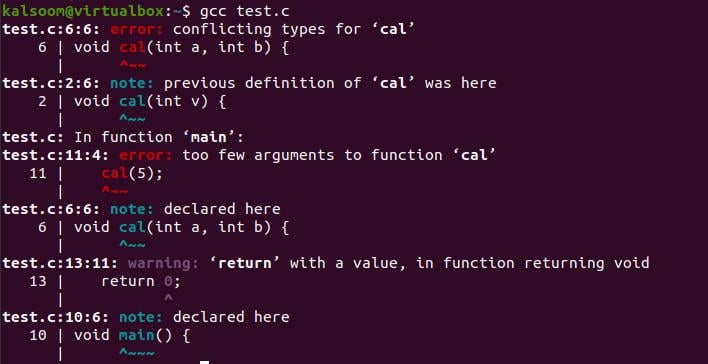 Within this example, we will be letting you know about the alternative method of implementing function overloading. We have opened the same file once more and added three header packages at the top of it with #include keyword. We have defined two user-defined functions of the same name with a single character change in them. Both function names start with “cal”.

The strlen() method is applied to both string variables to get lengths, and the malloc() method has been applied to length to get memory size. The pointer “z” has been getting memory via the malloc() method as it has to store the string value. The strcpy() method is used to copy the string value of the pointer variable “x” to “z”. While the strcat() method is used to append the value of the pointer variable “y” at the end of “z”. The updated value of “z” has been returned to the main() method. We have defined the function declaration with the “_Generic” keyword. 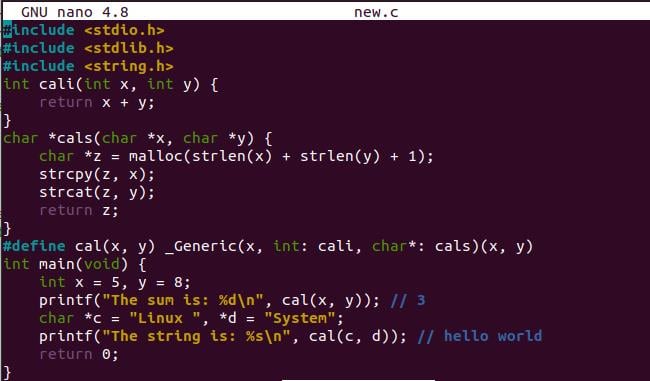 Compiled the code with the “GCC” package. Upon the execution of this code, we got the sum of two integers and the concatenated string.

Execute the following affixed instructions to get started.