Loop is used to execute some statements multiple times. The iteration of the loop based on the termination condition or the number of the array elements. Three types of loops are supported by any programming language. For loop is one of them. For loop can be declared by two ways. Simple for loop contains three parts.  And another for loop is for-in loop that is used to iterate any list of data or array. This tutorial shows the use of these two types of loops in awk command by using various examples.

First part is used to initialize the variable for starting for loop. The second part contains the termination condition to control the iteration of the loop and the loop will continue until the condition is true. The last part will increment or decrement the initialization variable based on the first part.

for (variable in array/list) {
statements
}

A simple for loop is used in the following script. Here, counter variable is initialized by 10 and the loop will terminate when the value of counter is less than 5. The script will print the counter values from 10 to 5. Run the command from the terminal.

The following output will appear after executing the command.

The following output will appear after executing the script.

When a for loop is declared under another for loop then it is called nested for loop. The outer loop that is used in this script will iterate for 2 times and the inner loop will iterate for 3 times. So, the print statement will execute for, (2X3=6) 6 times. Run the script from the terminal. 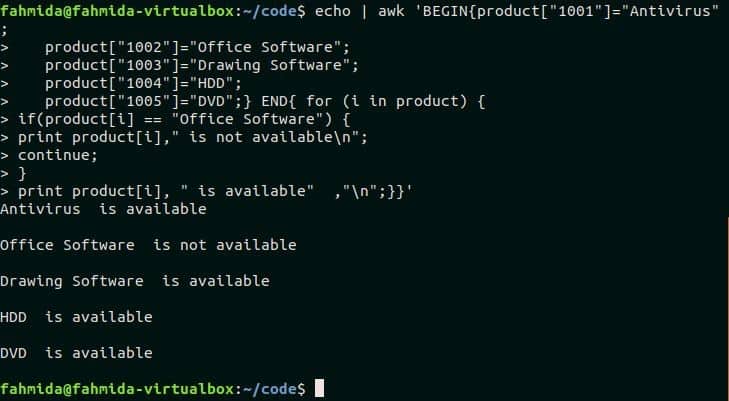 Create a text file named sales.txt and add the following content to practice this example.

Create an awk file named cal_sal.awk with the following script to calculate the total sales amount of the file sales.txt. The second field contains the yearly sales amount in the file sales.txt. In the script, the sales array will store all values of the second field and sum variable is initialized with 0 to add all values of sales array. Next, for-in loop is used to iterate each element of the sales array and add the value with the sum variable. Lastly, print statement is used to print the value of sum variable to display the total sales amount.

Run the following command to execute the script of cal_sal.awk file.

There are 5 records in the sales.txt file and the sum of the sales amount is 409000 that is printed after executing the script.

Different uses of for loop in awk command is tried to explain in this tutorial. Hope, the reader will get a clear idea on using for loop in awk script and able to use for loop properly in awk programming.