Making projects either of beginner or advanced level there might be some chances that you can encounter errors. These errors can either be related to the Arduino sketch or to the hardware of the project and we can overcome such errors if we keep in mind a few things and by remembering some common things can save you a lot of time and effort. So, we have given some of the most common errors that arise while compiling the Arduino code.

What is Error Compiling for the Board Arduino

Some common fixes for avoiding the compilation errors are mentioned below:

The most common error that is seen while compiling the Arduino code is the error number 4, 5 and 6 in the above given list and it is encountered due to the following reasons:

These errors can be avoided in such a way that whenever writing any loop,always write in between the start and end brackets from the beginning. Also, when writing the code in Arduino IDE keep checking if there is any code line highlighted in red and if there is rectify it first before compiling.

Declare variables that are to be used in Arduino code

Another error that is mostly seen while compiling the Arduino code is the incorrect use of variables in the code by not giving the data types and the error number 3 in the list above is encountered. There are two reasons for such type of error that are:

To avoid the chance of occurrence of such errors one should always make a habit of declaring the variable at the start of the program. To understand more about this error you must read what is the error “not declared in this scope”.

To connect a device/sensor with an Arduino mostly library for that device is required to get it recognized by the Arduino controller. Whenever there is a library missing in the Arduino sketch the error number 1 is encountered while compiling the code and the there is one reason for it that is:

Select the Board before compiling the Arduino code

Sometimes when compiling the Arduino code there the compilation error number 2 is seen which means that you need to select the board for which you are trying to compile the code. You can choose the respective board by selecting the board from the menu at the top of Arduino IDE as shown in the image below:

Next another menu will pop up and from that menu you must select the board that you are using by writing its name in the search bar and after selecting the board press OK as given in the image below: 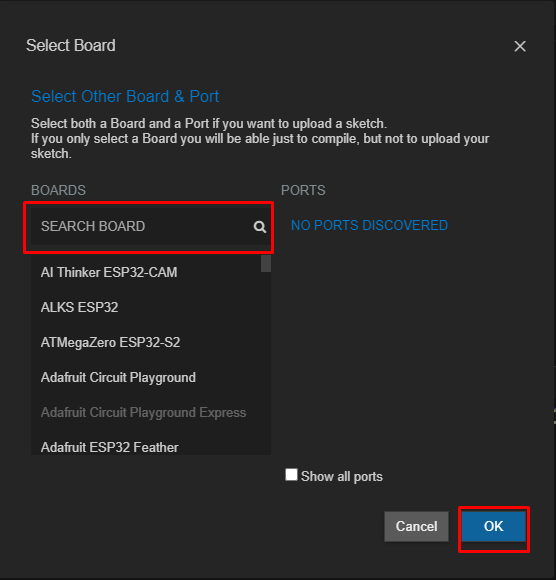 To avoid getting errors when compiling the Arduino code, we should remember a list of to do things whenever making a project using Arduino. Doing this will keep beginners out of the trouble caused by errors. We have explained the errors encountered by the programmers while compiling the sketches and how we can fix them in the first place.