As the name indicates that fcntl is abbreviated as ‘file’ control. It means it is based on the file handling process. The fcntl is a system call. It allows the program to place a read or a write lock. This function can be used to amend the file properties that are either opened already or can be opened through any action applied to it. It is a versatile function and is used to modify files in many ways like open, read and write, etc. This article is about the control functions on files.

In the Linux operating system, the fcntl call is done through the descriptors. For instance, a read lock is placed on a readable file descriptor, and a similar case is for the write lock. A file descriptor represents the file number that is opened. It is convenient for the program to remember which file it is working on. When we open a file, the number that is not assigned already and is free is given to the file in the descriptor table of the processes file. And in the case of closing a file, that assigned number is removed from the process’s descriptor table.

Firstly we define the fcntl library to make the process accomplish easily. The function call mainly contains two arguments in the parameter. One is the descriptor, as defined above; it defines the file on which the command of control is to be applied. In other words, on which the attributes need to be changed. The second one is the command that is applied to the specified descriptors.

Fcntl function is used for five different purposes, mainly including duplication, setting flags, etc.; each one is described here in detail.

This function has the specialty to return the flags of the descriptor as the function value. As the name indicates, we get the flag after setting it.

This function returns the flags for file status as the value of a function. When the status for the flag is described as an open flag, then we describe the status flags.

It sets the status flag to the file. As GETFL is used to return the file status.

This function tends to create and set process id or group process id.

The return value from the fcntl depends on the command used. If commands encounter an error, it returns -1. If every function undergoes no issue, then any other value except -1 is returned. Whereas in the case of F_GETOWN, the id returned may be a positive value or a negative value.

Now we will add some elementary examples here. To implement the codes of fcntl, you need to have a text editor and Linux terminal to get the resultant value.

Consider an example in which we created and then wrote a new line in a sample text file. This example will not use the involvement of fcntl as a function. This function’s features will be implemented in the code only by using a library.

We will write a string to the code, so we need to use the string library. We have taken an array of file descriptors here. Furthermore, a character array has been taken that is directly initialized with a string of some characters. With the help of the file descriptor, we will use some file operations of the file flag status like reading and writing in the file, etc. If the file is already created, then you need to open it and write the string in it.

This statement will open the file named ‘sample.txt’ by using the O_RDWR flag. Now to add the string defines earlier, it will be entered in the file.

Through the read-option, the string will be displayed on the execution of the code from the file. Both the file descriptors are closed at the end. 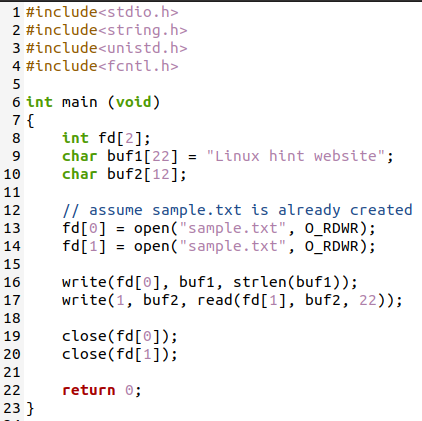 After saving the file, we will use a GCC compiler for the execution of the file.

This is an example of the F_GETFL command. It returns the file status flag as the function value. First, the file will be opened; if it is not already created, then O_CREAT will create the file; first, all these flag status functions are stated below to make it easy to understand.

O_RDONLY: This feature opens the file for the reading purpose only.

O_WRONLY: Deals with the writing purpose only.

O_RDWR: It is for the reading and writing process as well.

O_APPEND: Appends on each writing function on the current file.

These are the main flag that is used in the example. Coming back to the example, if the returned value by opening the file is less than 0, then an error message is displayed. 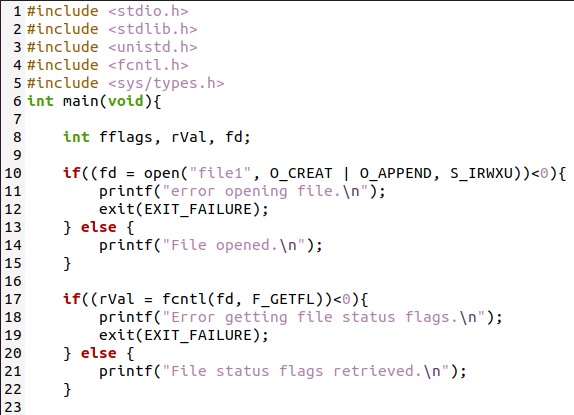 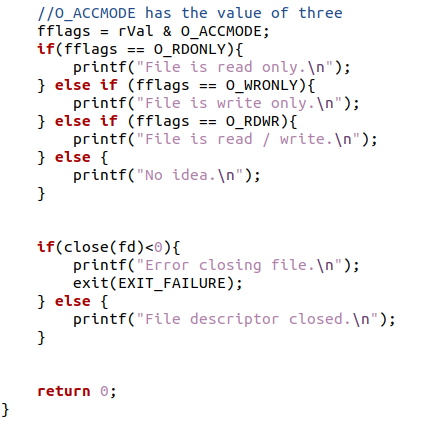 Compile the code; you will see that all the statements are displayed according to the fd status either the file is opened or closed.

The article ‘C: Fcntl function usage’ contains the features of the fcntl function. The file descriptor plays a vital role in the file handling process regarding any feature. We have used some flag examples, too, in the case of reading and writing to the file. Both examples explained here will be helpful for you in the utilization of Fcntl in the C programming language.