“The fallocate () function is used so that the caller can directly alter the disc space allocated for the file that is referenced by fd for a byte-range beginning at offset and going for len bytes. Using fallocate, you can deallocate or pre-allocate the disc space that has been assigned to a file. Preallocation is completed rapidly for filesystems that implement the fallocate system call by allocating blocks and designating them as uninitialized, needing no IO to the data blocks. This is a lot quicker than creating a file by putting all zeros in it. The fallocate () function returns a success or failure exit status of 0 or 1.

The operation to be passed out on the particular range is determined by the mode parameter. The fallocate () allocates disc space in the “offset” and “len”-specified range as its default operation (mode is zero). If “offset and len” are more than the file range, the file size will adjust. Any subregion in the range defined by “offset” and “len” that was empty prior to the call will have its initial value set to zero. This default behavior, which aims to implement the POSIX fallocate (3) library function as efficiently as possible, is very similar to that of that function.

A lucrative call guarantees that further writes into the range defined by “len” and “offset” will not be unsuccessful due to insufficient disc space.

At the start of the C code, we employ several header files. The only thing we need to do while writing C code is to include the header files; otherwise, our C code won’t have the functions we need. As you can verify in this sample, we have the “fcntl. h” header file. Then the standard input and output header file, “stdio.h,” was positioned on the second line of the code. Then we add a second header file, “errno”, The integer value errno, which is produced by system calls as well as some library methods in the event of an error to identify something went wrong, is defined in the errno.h header file of the C programming Standard Library.

When you are not working in the same directory as the file, use an absolute path that begins with “/”. When working in the same directory as the file, use a relative path, which consists of just the file name and its extension. Here, the “0_WRONLY” means we are opening the file for writing only, and the “O_CREAT” is used to receive a warning if the file is already present. The S_IRUSR is a global constant found in the POSIX sys/stat. h file. User read authorization bit is what it is called. The prefix S_ could mean “status of,” “RUSR,” or “Read of User”. Then we have “S_IWUSR”.

For the file’s owner, set the write authorization bit. Below, we have the “if” condition, and we place the condition that “fd” is equal to “-1”. If the condition is true, then the “perror ()” function is utilized. This “perror” is utilized for printing the error message to stderr. Then we again declare and initialize the “int” variable named “status” and place the “posix_fallocate” function here and pass three parameters. The “fd” is the first parameter, “0” is utilized as the second parameter, and then we have “100” as the third parameter of this “fallocate” function.

Below this condition of the “if” statement is “status! =0”. If it is true, then the “printf” statement will be executed for printing the error on the screen, and we also have the “return 0” at the end of this code. 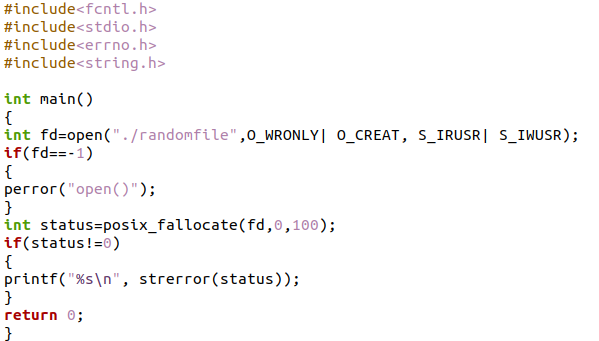