A computation is any type of calculation that follows a well-defined algorithm. An expression is a sequence of operators and operands that specifies a computation. In other words, an expression is an identifier or a literal, or a sequence of both, joined by operators.In programming, an expression can result in a value and/or cause some happening. When it results in a value, the expression is a glvalue, rvalue, lvalue, xvalue, or prvalue. Each of these categories is a set of expressions. Each set has a definition and particular situations where its meaning prevails, differentiating it from another set. Each set is called a value category.

Note: A value or literal is still an expression, so these terms classify expressions and not really values. 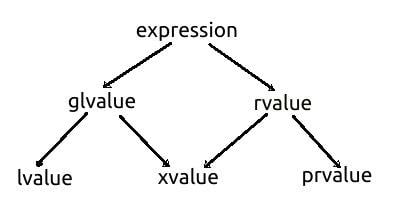 You need basic knowledge in C++ in order to understand this article; you also need knowledge of Scope in C++.

To really understand the expression category taxonomy, you need to recall or know the following basic features first: location and object, storage and resource, initialization, identifier and reference, lvalue and rvalue references, pointer, free store, and re-using of a resource.

The location for an object is also called the storage or resource of the object.

The first line declares an identifier. This declaration provides a location (storage or resource) for an integer object, identifying it with the name, ident. The next line puts the value 8 (in bits) into the location identified by ident. The putting of this value is initialization.

Here, the initialization with {1, 2, 3, 4, 5}is done in the same statement of the definition (declaration). The assignment operator is not used. The following statement defines an array with content {1, 2, 3, 4, 5}:

This time, an assignment operator has been used for the initialization.

The normal way to create a reference is as follows:

Here, there is no preceding identification. To access the value of the object, simply use ref as you would use the ident above.

With the && declaration, there is no possibility of passing an argument to a function by identifier. The only choice is to pass by reference. In this case, there is only one location used within the function and not the second copied location as with an identifier.

Note: ptdInt is an identifier and not a reference, while the name, ref, mentioned previously, is a reference.

The second and third lines in the above code can be reduced to one line, leading to the following code:

An operating system allocates memory for each program that is running. A memory that is not allocated to any program is known as the free store. The expression that returns a location for an integer from the free store is:

This returns a location for an integer that is not identified. The following code illustrates how to use the pointer with the free store:

To destroy the object, use the delete expression as follows:

The argument to the delete expression is a pointer. The following code illustrates its use:

In expression category taxonomy, reusing a resource is the same as reusing a location or storage for an object. The following code illustrates how a location from free store can be reused:

The following program shows how an integer reference returned by a function is reused:

An object such as i, declared in a local scope (function scope), ceases to exist at the end of the local scope. However, the function fn() above, returns the reference of i. Through this returned reference, the name, myInt in the main() function, reuses the location identified by i for the value 17.

An lvalue is an expression whose evaluation determines the identity of an object, bit-field, or function. The identity is an official identity like ident above, or an lvalue reference name, a pointer, or the name of a function. Consider the following code which works:

seq is an array. The location for ‘v’ or any similar value in the array is identified by seq[i], where i is an index. So, the expression, seq[i], is an lvalue expression. seq, which is the identifier for the whole array, is also an lvalue.

A prvalue is an expression whose evaluation initializes an object or a bit-field or computes the value of the operand of an operator, as specified by the context in which it appears.

256 is a prvalue (prvalue expression) that initializes the object identified by myInt. This object is not referenced.

15 and 63 are each a constant that computes to itself, producing an operand (in bits) for the addition operator. So, 15 or 63 is a prvalue expression.

Any literal, except the string literal, is a prvalue (i.e., a prvalue expression). So, a literal such as 58 or 58.53, or true or false, is a prvalue. A literal can be used to initialize an object or would compute to itself (into some other form in bits) as the value of an operand for an operator. In the above code, the literal 2 initializes the object, a. It also computes itself as an operand for the assignment operator.

Why is a string literal not a prvalue? Consider the following code:

In the following statement, an array literal initializes the object, arr:

In the second statement of the following code, a or b can still be considered as a prvalue:

So, a or b in the second statement is an lvalue because it identifies an object. It is also a prvalue since it computes to the integer of an operand for the addition operator.

(new int), and not the location it establishes is a prvalue. In the following statement, the return address of the location is assigned to a pointer object:

Here, *ptrInt is an lvalue, while (new int) is a prvalue. Remember, an lvalue or a prvalue is an expression. (new int) does not identify any object. Returning the address does not mean identifying the object with a name (such as ident, above). In *ptrInt, the name, ptrInt, is what really identifies the object, so *ptrInt is an lvalue. On the other hand, (new int) is a prvalue, as it computes a new location to an address of operand value for the assignment operator =.

The definition of xvalue, quoted from the C++ specification, is as follows:

“An xvalue is a glvalue that denotes an object or bit-field whose resources can be reused (usually because it is near the end of its lifetime). [Example: Certain kinds of expressions involving rvalue references yield xvalues, such as a call to a function whose return type is an rvalue reference or a cast to an rvalue reference type— end example]”

What this means is that both lvalue and prvalue can expire. The following code (copied from above) shows how the storage (resource) of the lvalue, *ptrInt is re-used after it has been deleted.

The following program (copied from above) shows how the storage of an integer reference, which is an lvalue reference returned by a function, is reused in the main() function:

When an object such as i in the fn() function goes out of scope, it naturally is destroyed. In this case, the storage of i has still been reused in the main() function.

The above two code samples illustrate the re-use of the storage of lvalues. It is possible to have a storage re-use of prvalues (rvalues) (see later).

The following quote concerning xvalue is from the C++ specification:

So, an xvalue is an lvalue or a prvalue whose resources (storage) can be reused. xvalues is the intersection set of lvalues and prvalues.

Another quotation from the C++ specification:

“Note: Historically, lvalues and rvalues were so-called because they could appear on the left- and right-hand side of an assignment (although this is no longer generally true); glvalues are “generalized” lvalues, prvalues are “pure” rvalues, and xvalues are “eXpiring” lvalues. Despite their names, these terms classify expressions, not values. — end note”

As of now, the expression category taxonomy is better illustrated with a Venn diagram as follows: 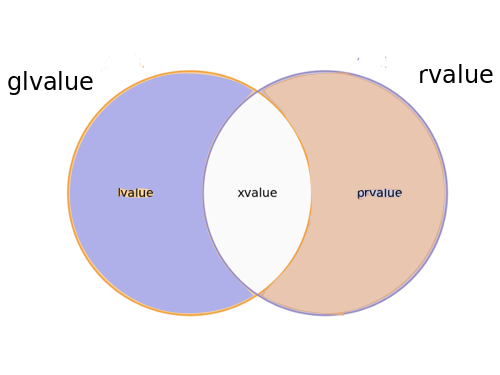 An lvalue is an expression whose evaluation determines the identity of an object, bit-field, or function.

A prvalue is an expression whose evaluation initializes an object or a bit-field or computes the value of the operand of an operator, as specified by the context in which it appears.

An xvalue is an lvalue or a prvalue, with the additional property that its resources (storage) can be reused.