Understanding variables in the Bash shell is essential in working with Linux in a professional manner. It is one of the key requirements for programming as well as achieving the Linux Professional Institute Certification (LPIC) Level 1 [2].

The previously published article by Fahmida Yesmin [4] gives you a wonderful introduction into Bash variables. Here we step further, and explain how to declare variables in Bash in such a way that you can use them in other environments on your Linux system, and which corresponding side effects you have to take into account.

A brief description of Bash

The Bash shell was first released in 1989 and has been used as the default login shell for most Linux distributions. Brian Fox wrote Bash as a UNIX shell and command language for the GNU Project as a free software replacement for the Bourne shell. It is an acronym for Bourne Again Shell. Bash is largely compatible with sh and incorporates useful features from the Korn shell ksh and the C shell csh [6].

While the GNU operating system provides other shells, including a version of csh, Bash is the default interactive shell. It is designed with portability in mind, and currently runs on nearly every version of UNIX plus other operating systems [9].

Bash variables in a nutshell

Variables are essential components of programming languages. They are referenced and manipulated in a computer program. Simply put, variables represent named memory cells. This is the same in Bash as in any programming language. This makes it possible for us as humans and users of the computer to store values in the “brain” of the computer and find them again via the assigned name of the variable.

The term variable refers to a combined form of two words, i.e., vary + able, which means its value can be changed, and it can be used for multiple times. In contrast to this, variables that cannot be changed are called constants. [10]

As long as there is enough memory available for your script you can freely create and use variables. You can simply set them by defining a variable name and then assigning its value. A variable name in Bash can include letters, digits, and underscores. Its name can be started with a letter and an underscore, only. Valid variable names are size, tax5, and _tax20 but not 5rules.

A variable value in Bash can contain a number, a single character, a string of characters, or a list of items (called array). It does not have a visible data type, and the internal data type of the variable will be automatically figured out (or derived) upon assignment of a value. Furthermore, there is no need to declare the variable — assigning a value to its reference will create the variable automatically. The example Bash script below demonstrates this for a string assignment, and a numeric number assignment.

There are no fixed rules for the spelling of names of variables, only conventions. These conventions are used:

For global IT companies it is common to work with style guides to ensure a common coding style among the company. See the Developer Editorial for IBM, and the Google Style Guide [3] for more information about the conventions they follow.

The default case is that a variable is locally bound to a structure, function, script, or process, and cannot be accessed from outside of it. The example below shows this for the variable $message that belongs to the script, and $welcome that belongs to the function outputWelcomeMessage().


# define a variable message to the script


# define a variable message to the script

# define a local variable with the same name

Extending the scope of a variable

In order to make an internal variable visible to other child processes an additional step is needed. This step is called exporting a variable. Bash offers the usage of the keyword export followed by the variable name. The listing below demonstrates this for the variable backupPath.

The export command is a shell built-in that is used to define the variable as one that subshells (shells spawned from the original) inherit. Variables that are exported can be read and written by more than one process, then.

The second option is to declare the variable as an environment variable right from the start. You can do that by using the keyword declare followed by the option “-x” (see [5] for more info about the declare command). The effect is similar to the export command that was introduced before.

Inherit from other sessions

When you execute a program it automatically inherits its environment variables from the parent process. For instance if $HOME is set to /root in the parent then the child’s $HOME variable is also set to /root.

Among others, Linux comes with useful commands and options that relate to variables. The first two ones are called env and printenv. They list all the environment variables.

The image below shows the output of the command env in a terminal that is run in an X session. It contains variables like $XTERM (terminal type), $SHELL (the program that is called upon login, and shows /bin/bash for the path to the Bash interpreter), $LS_COLORS (the colours that are in use to highlight different file types when calling ls), and $DESKTOP_SESSION (the current X Desktop Environment). 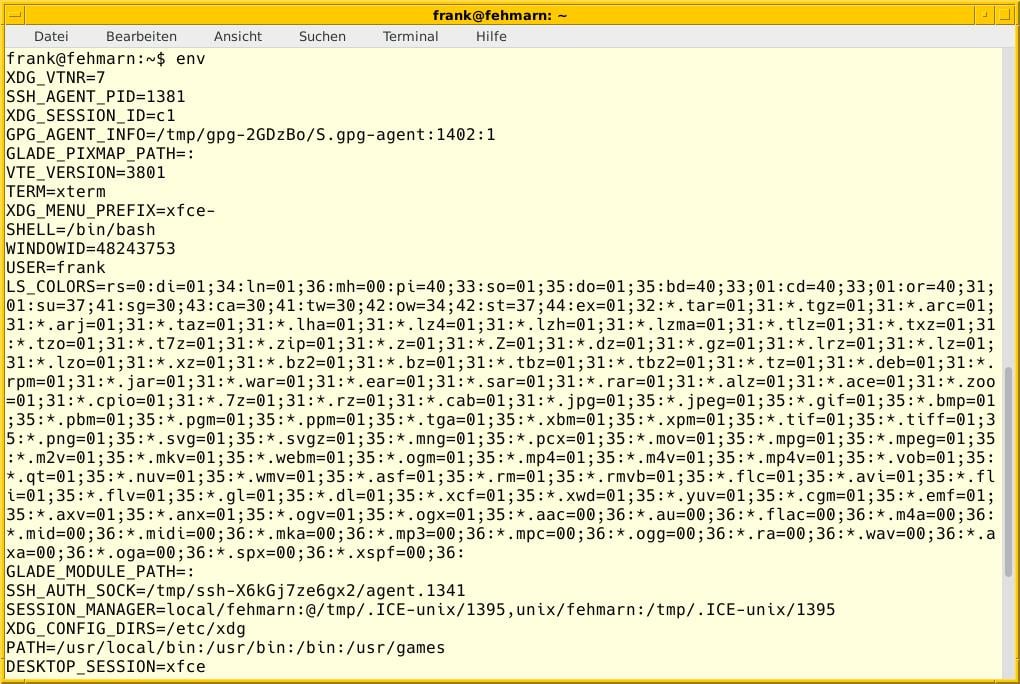 The third and the fourth one are options of the export command — -p and -n. -p is short for print and just displays all the exported variables in the current shell using the declare command.

The option -n is used to unset an environment variable. The listing below demonstrates this for the previously defined variable BACKUPPATH.

Bash is a very clever but sometimes also a bit complex environment. Variables control how the different tools interact. Exporting variables helps communicating between processes and is easy to use in everyday life.

Jacqui Kabeta is an environmentalist, avid researcher, trainer and mentor. In several African countries she has worked in the IT industry and NGO environments.

Frank Hofmann is an IT developer, trainer, and author and prefers to work from Berlin, Geneva and Cape Town. Co-author of the Debian Package Management Book available from dpmb.org