Users can access the resources by setting the configurations and other settings that are integrated based on the input of the user. The environment is where users can keep track of all these settings, updates, and details to maintain the overall shell. In this guide, we will walk users through different ways to export the variables. To export a variable to an environment that has all child processes inside the shell, an “Export” command is used. By default, all of the variables that are defined by the users are local and are never exported to any new process on their creation. We use an export command to export all existing variables and defined functions within the child process. We will check out in detail how to export them using an example in the later section of this tutorial.

Following is the list of things that are a must needed before executing the commands mentioned. Users need to have:

Note: In this article, we are using Linux Mint 20 to export variables in bash. You can implement this article on any Linux distribution as per your desire.

To export the variable in bash, open Terminal from Menu on the bottom left on the screen in your computer system. Click on the Terminal option. Once the terminal is opened, you need to provide a variable, let’s call it vech for the sake of ease. We will then assign it a value for now, i.e., “Bus”. In Linux Mint, the export built-in automatically exports all values to the environment of its child processes.

The variable is created using the echo command to display it on the console. Provide the variable name next to it. Then click enter. The screen will display the value provided to the variable created that was Bus in our case.

Now, you need to start a new shell instance. For this, type bash on the console window.

Note: To enter the bash, the user must be a sudo user and must have privileges required to access the shell. Enter the password to proceed. Once done, you will be entered inside the shell.

Now, you need to display back the variable vech’s value with echo. The value in our case set by us initially was “Bus”, type echo $vech, then click the enter button.

For now, as shown in the above image, we will have an empty line in the output. This is because the vech variable declared by us is not exported into the new process till now. This is where the export command comes into use to make the variable known and aware of our child processes. Enter the following example at your console:

Export is a command used in the bash shell to make use of variables and functions that are to be passed on further to all child processes. It works by including a variable in child process environments. This is done by keeping another environment.

Viewing All Exported Variables on the Shell

To view all of the exported variables on your current shell, we generally use the -p. To execute this flag, we will be using it along with the export command. This will export all existing variables and functions that are user-defined within our child process. If there is no variable defined during the process or no function names are given, we will still use the -p option. This will return a list of all exported names in the shell. Type the cited command in the command line.

Hit enter. A list of data will be displayed containing all printed exported names, as shown in the figure below: 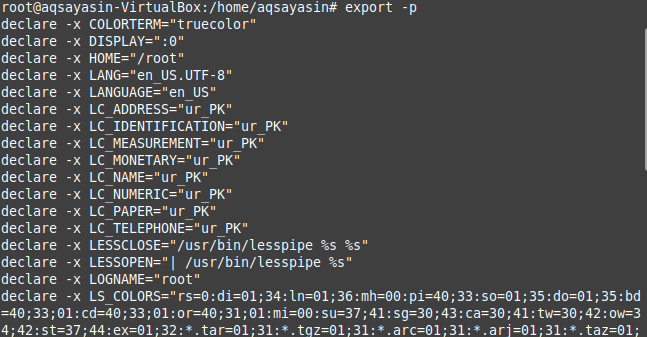 All set variables will no longer be an environmental variable. However, they will still be shell variables. 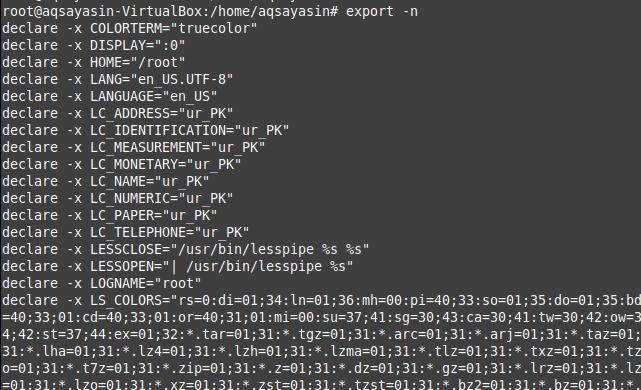 Note: You can also add and set the environmental variables permanently as well. These variables will be set for all Global Environment Variables and can be used by all Users. For that, you need to create a file and add a system-wide environment variable and then initialize this variable. Further, you will be required to place your sh script with all of your exported variables.

In this way, the variables can be exported to child processes of the shell. Users can check how export commands can be run. Variables can be included in any of the child process environments without causing any effect on other existing environments. The shell running session and related information, i.e., our environment, is an important part of the Linux bash. Users can simply set variables at any of the current environment and reuse them again. By default, bash also has some environment variables. Playing around with the variables and setting them based on usability and requirements can be done easily using the terminal in Linux.