You may have encountered many situations when you have to quit your bash script upon some inconvenience. There are many methods to quit the bash script, i.e., quit while writing a bash script, while execution, or at run time. One of the many known methods to exit a bash script while writing is the simple shortcut key, i.e., “Ctrl+X”. While at run time, you can exit the code using “Ctrl+Z”. This guide will show how the batch script can be quitted using the different exit clauses while executing. Let’s get started by logging in from the Ubuntu 20.04 system first and opening the shell using “Ctrl+Alt+T”.

The first method we have been utilizing in this example is to use the “exit” statement in the bash script. Create a new file in the shell with the help of a “touch” command and open it in any editor.

The read statement is widely known to get input from the user. Here it will take integer values at run time and save them to the variable “x”. The “if” statement has been checking a condition. If the value of “x” entered by a user is equaled to 5, it will display that the number is matched via the echo statement. The “exit 0” clause has been used here. After executing the “echo” statement, the bash script will be quitted, and no more execution will be performed due to “exit 0”. Otherwise, if the condition doesn’t satisfy, the “echo” statement outside of the “if” statement will be executed.

Run your bash file with the help of a bash query in the shell. The user added 4 as input. As 4 is not equal to 5, it doesn’t run the “then” part of the “if” statement. So, no sudden exit will happen. On the other hand, the echo statement outside of the “if” statement executed states that “Number doesn’t match..” and the program ends here.

Run the same code once again with the bash command. The user added 5 this time. As 5 satisfies the condition, the “echo” statement inside the “then” clause was executed. After that, the program stops quickly due to the use of “exit 0”.

Instead of using “exit 0”, you can simply use “exit” in your bash script to exit the code. So, open the same file and update your code. Only the “exit” clause has been changed here, i.e., replaced by “exit”. The whole file remained unchanged. Let’s save the code first using the “Ctrl+S” and quit using “Crl+X”. Let’s execute it to see if it works the same as the “exit 1” clause does or not.

Run the bash file “bash.sh” in the terminal by utilizing the command shown in the attached screenshot. The user entered the value “6” and it didn’t satisfy the condition. Therefore, the compiler ignores the “then” clause of the “if” statement and executes the echo clause outside of the “if” statement.

Run the same file once again. This time the user added 5 as satisfying the condition. Thus the bash script exits right after executing the “echo” clause inside the “if” statement.

You can also use the “exit” clause to exit the bash script while stating 1 with it at run time. So, open the same file and update your code as we have done before. The only change is “exit 1” instead of “exit” or “exit 0”. Save your code and quit the editor via “Ctrl+S” and “Ctrl+X”.

At first execution, the user added 6 as input. The condition doesn’t satisfy and commands within the “if” statement won’t be executed. So, no sudden exit happened.

On the second attempt, the user added 5 to satisfy the condition. So, the commands within the “if” statement get executed, and the program exits after running the “echo” clause.

Let’s make use of the “exit 1” clause in the bash script upon checking different situations. So, we have updated the code of the same file. After the bash support, the “if” statement has been initialized to check if the currently logged-in user, i.e., “Linux” is not the root user. If the condition satisfies, the echo statement within the “then” clause will be executed, and the program will exit right here. If the currently logged-in account is a root user, it will continue to execute the statements outside of the “if” statement. The program will continue to get two inputs from a user and compute the sum of both integers. The calculated “sum” will be displayed, and then the program will exit.

As the “Linux” account is not a root user of our Ubuntu 20.04, the execution of this code has only executed the “if” statement and clauses between it. The program quits after this.

The “set –e” built-in is widely known to exit the program upon encountering the non-zero status. So, we have added 3 twin-named functions with 1 echo statement and a return status clause in each. The “set +e” is initialized before calling the first two methods, and “set –e” is used after that, and two functions are called after that. 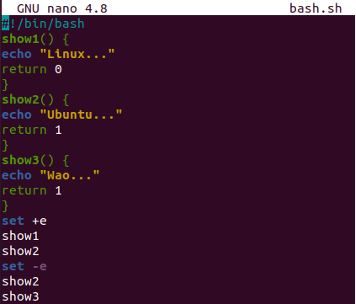 Upon running this code, we got the output as expected. Upon encountering the return 1 status, the program stopped without executing the “show3()” method.

This guide covers all the possible ways to exit any bash script while writing, executing, or running. Thus, try to implement each example covered in this article to get a more clear understanding.