Grep is indeed a Linux / Unix terminal shell utility that searches a document for a sequence of characters. A regular expression seems to be the term for the textual pattern to be searched. It outputs the row with the outcome when it detects the same match. While browsing across huge log files, the grep query comes in hand. So, grep –R has been used to exclude directories while using some keywords. Let’s discuss grep –R in this tutorial step by step.

Make it clear to have any distribution of Linux installed and configured. We are using the Ubuntu 20.04 Linux system to implement this topic. On the other hand, you must have root user rights as well. Open your command terminal to start working.

When you open the command terminal, you are currently at the Ubuntu 20.04 Linux system’s Home directory. Let’s navigate to a Documents directory. For this, you have to use the below-stated “cd” command in the command shell to do so, along with a directory path.

You have to add some text data or information in each file separately, as you can see in the images below. Now save all the files and close. 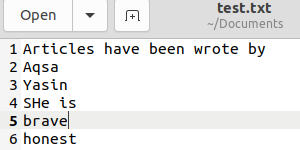 Now it’s our turn to try some grep –R command on the Documents directory and its files or folders. We will be using the grep –R command to exclude the directories while using one keyword or unique word. We will have a command that will search that particular word from all the files residing in the Documents folder except one directory, which has been given to exclude in the command. So, we are going to exclude the “Wao” directory currently present in the Documents directory. So, try the below grep command to exclude the “Wao” directory along with the –R flag, which has been used for recursive function, and “Aqsa” has been used as a keyword to be searched in the files. The output in the snapshot below is showing the text from two files, “test.txt” and “new.txt,” having the text “Aqsa” in their data and the directory “Wao” has not been checked due to exclusion in the command. However, the directory “Wao” also has some text files that are avoided to be checked.

Let’s look at both the files. Try the cat command to see the file “new.txt” contains the keyword “Aqsa.”

The other file, “test.txt,” containing the keyword “Aqsa,” has been displayed using the cat command below.

Now let’s exclude the same directory “Wao” from the Documents folder using another keyword, “brave,” if it lies in any files. So, try the below grep command to exclude the directory as below. The output image shows the two matched outputs for the keyword “brave” in two files, “test.txt” and “one.txt.”

You can see the file “one.txt” contains the keyword “brave” using the cat command.

The output below shows the file “test.txt,” which contains the keyword “brave” with cat instruction usage.

Let’s jump to the sub-directory “Wao” of the Documents folder using the “cd” command in the shell.

Let’s create three new files, “bin.txt,” “had.txt,” and “sec.txt” in the directory “Wao” while using the touch command listed below. Add some text data in all the files, save and then close them.

Let’s list all the directories using the “ls” command as below. You will find all the three newly created files in it.

Let’s try the same grep instruction in your command terminal to exclude the directory “Wao” while using another keyword “I” as a match as below.

Now the output for this command shows the keyword “I” in the files held in the folder Documents while the directory “Wao” has been ignored using the “exclude-dir” keyword.

Now let’s exclude the same directory “Wao” using another keyword, “rimsha,” from the grep command shown below in the terminal. The output snap shows no output because the keyword “Rimsha” has not been found in any of the files located in the Documents folder.

Let’s navigate to the Documents folder first using the “cd” command as beneath.

Let’s list all the directory Documents’ files and folders using the below ‘ls’ command. The output shows some text and other files along with one sub-directory, “Wao.”

Using Ubuntu 20.04, we already understand how and when to use the grep –R command. The grep command is extremely versatile and helps to locate text embedded in hundreds of documents.