When we run any code that contains error then the error displays in the output by stopping the execution of the program. Some errors may not be recognized by the users and create an undesirable situation for them. But if the error can be displayed in an understandable format for the users then it is easy for them to know the reason for the error. In any object-oriented programming, try-catch or try-catch-finally block is used to handle errors and display them in a readable format which is called exception handling. How exception handling can be done in Python script is shown in this tutorial.

Example-1: Use of a single try-except block to validate numeric data:

This example shows the very simple use of exception handling in Python. In the try block, two inputs will be taken from the user, one is a string value and another is a numeric value.  If the user types any string value in place of numeric value for the second input then, the ValueError exception will be generated by python3 and a custom error message will be displayed from except block.

except (ValueError):
# Print custom error message
print("Wrong input! You have to type a number as your age.")

The script is executed two times in the following output with the wrong input and correct input. The first time, when the user type ‘Thirty one’ as age value for the second input that takes numeric value then a ValueError is generated and the error message is displayed from the except block. The second time, no error is generated for correct input values.

Example-2: Use of multiple except block to handle multiple errors:

How you can use multiple except block to handle multiple errors is shown in this example.  Two types of errors will be handled in this script. A filename is taken as input from the user for reading. If the file does not exist then it will generate an IOError exception and if the file exists but empty then it will raise a custom exception. For this, two except blocks are used in this script. When none of the error occurs then the content of the file will be displayed.

# Define the try block
try:
# Take the filename as input
filename = input('Enter a filename\n')
# Open the file for reading
file_handler = open(filename)
# Set the seek ponter from 0 to end of the file
file_handler.seek(0, os.SEEK_END)
# Read the size of the file in bytes
size = file_handler.tell()
# Print the file content and the number of characters of the file 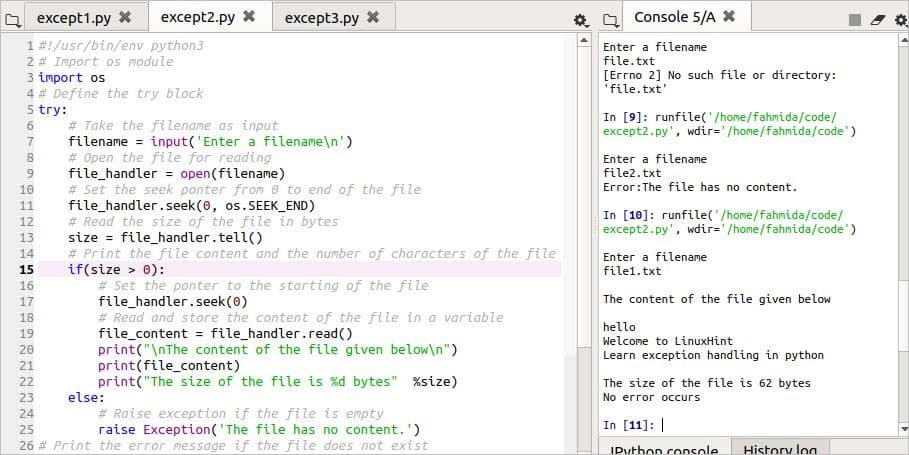 Example-3: Use of try-except-finally block to handle division error

# Handle errors
except (ZeroDivisionError, ValueError):
print("Divided by zero error or The value is not a number")

Here, the script is run for two times with both correct inputs and with the second input as 0. So, the second time exception is generated and displays the error message.