Connection issues are one of the ordeals we have to face when connected to a network. Nothing is more annoying than getting a disrupted connection when you’re in the middle of a game, or when you’re about to finish your task, or when you’re reaching the climax of a movie. When this happens, we normally have to call network technicians to check what’s wrong. It is indeed better to put things in the hands of the experts but at times, it takes a bit longer before they can come and check the problem. In critical times though, waiting can be excruciating. It is indeed a pain in the neck especially if you’re a lost sheep, not knowing what to do. Good thing, there is a tiny networking tool we can use for low-level troubleshooting. 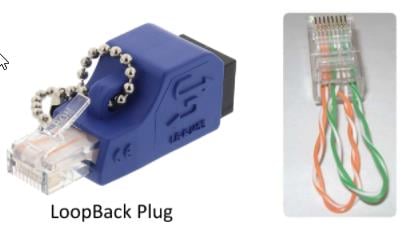 An Ethernet loopback plug is a nifty tool that can help you troubleshoot problems with your network connection or to test the Ethernet cables and networking hardware. It is also sometimes referred to as RJ45 adapter, Ethernet loopback adapter, and Ethernet loopback cable. This tool basically takes the output signal as the input signal to test if the connection is working. To transmit signals, the Ethernet cable uses pairs of wires. In Fast Ethernet, or 100BASE-TX, only two out of four pairs are used. The latest standard, Gigabit Ethernet or 1000BASE-TX, uses all four pairs to transmit data. In a loopback plug, the TX (Transmit) pair is hooked to the RX (Receive) pins, creating a closed loop and thus transmitting the signal back to the same end.

The Ethernet loopback plug comes in many forms. The common one is an adapter that has two sides, one has an RJ45 jack, and the other side has an RJ45 plug. There are also loopback plugs that only have the male RJ45 plug and a loopback cable connecting the TX and RX pins, mainly used for testing network ports. Depending on the type of your network, there are adapters for Fast Ethernet and Gigabit Ethernet.

A loopback plug is a simple and portable network tool that is very easy to use. You simply have to plug it into a network port on your router, switch, computer, or any networking equipment that you suspect is giving you connection problems. If the connectivity lights turn on, that means the port is up. That simple. Take note however that some switches are equipped with built-in loopback protection so the loopback adapter will not work on such equipment.

When do we use this small-scale networking tool? Here are some cases where the loopback plug proves to be more than useful.

The loopback plug is a handy tool for testing network ports on any equipment. Just plug it in and check if the link lights are active. If not, then there’s a problem with the port. Loopback plug just makes everything easier. If you want to test a port on your router for example, there’s no need to carry a laptop and a cable with you just to check the port. You can test the port with a loopback plug small enough, you can slip it into your pockets.

The Ethernet loopback plug is also a great tool for identifying network issues. It can help you perform low-level troubleshooting. You don’t even need to be a technician to do this. If you’re not able to connect to the internet using your laptop for example, you can plug the loopback plug to the Ethernet port of your laptop to check if it’s faulty. If the lights are active, you can check the port on the router’s end and check for connectivity lights. If it’s active, then most likely, your cable is faulty.

You can also use the loopback plug to test the Ethernet cable. Simply plug one end of the cable to the adapter and the other end to a switch or router. If the link lights on the other side of the equipment turns on, then your cable isn’t faulty. These are just a few of the many scenarios where the Ethernet loopback plug can help you identify the cause of connection problems.

The miniscule tool is not only used by newbies, even networking experts carry this tool with them. When mapping out the physical layout of a network for example, this can quickly help them identify the active ports in a network hub. In addition, the loopback plug can help them test pieces of hardware before deploying them in the network to make sure that everything is up and running once the network goes live. This can help them get the job done without using sophisticated and expensive networking equipment.

Some wall jacks are hard to reach. Some of them are in the tightest of corners or are obstructed with furniture or racks making it extra difficult to test if they’re working or not. The Ethernet loopback plug’s compact design makes it easier to test these hard-to-reach wall jacks without using a cable and any other network equipment or computer.

Sometimes there are just too many wires connected to the router or switch that we can’t already tell which cable connects to which device, even more so if the cables are of the same color. Instead of tracing each cable’s connection, the Ethernet adapter can help you sort out cables easily by just unplugging one end from the device and connecting it to the adapter. From the router or switch’s end, the port number will light up to let you know which port it’s connected to. At the same time, you can also check if any of the cables needs to be replaced.

The Ethernet loopback plug may be small but it can do big things for networking newbies and experts alike. For just $10 to $20 dollars, you can already have a tool that can help you in hardware diagnostics, cable testing, troubleshooting networking problems, and organizing network equipment. It is inexpensive, compact, lightweight, portable, and most importantly, easy to use making it anyone’s favorite networking tool.