We need to quote our sayings or items through single or double quotes whenever we want to specify something. But using quotes, we eliminate the actual meaning of the special characters using inside them. Sometimes, it’s necessary to remove the quotes to elaborate something or a code in a new way. So to do this, we use some escape characters inside the quoted body. These characters are as follows:

Sometimes while accomplishing any task, such a situation occurs where we feel the requirement to take print of a single quote inside the string. A single quote is not used where there is already a quoted string. So you can overcome this issue by using a backslash following the single quote. Here the backslash and a quote are used in the “don’t” word. The whole string is accompanied by the ‘$’ sign at the start of the declaration of the variable.

When we print the variable, we will get the value without single quotes.

Everything has some cons and pros. One pro of using a single quote is that if its variable is used inside the quotation, it is not printed as it is assigned to the variable. For instance, here, “b” is a variable having a single-quoted string. We take a print of that variable through the echo command. Here the variable is used inside the double-quoted quotation so that the whole string is displayed without any quotes.

In other words, a quotation inside the quotation is used here to create a simple string.

Both single and double-quoted strings act similarly when they are used together in any command. But when you use space between them, then they work as a separate string. Here we have used three strings in different ways.

Now there is some change in this command. One double-quoted string surrounded by two single-quoted strings is used in the third print. The result of this command is the same as in the second print.  The single and double quotes are removed from all three strings, and these strings are printed collectively.

Moving towards another example, we need to create a file with an extension of .sh named “file.sh”. After creation, edit it by using the bash code. As it is known that the dollar sign is not compatible with the inverted commas. So to use them collectively, we need a backslash following the dollar sign in the string that is double-quoted.

For printing purposes, we will use the “for” loop. This will print all the words in the string that we have given to the variable.

For word in $a

After writing the code, now save the file with the .sh extension. Go to the terminal to get the output. Write the given command:

It is displayed that all the elements are displayed without any quote. Because of the loop, the resultant items are present in a new line.

The next example is a sort of taking a risk. But to use any simple sentence without quotation, we have to use consecutive steps. This is a risk-taking example because it needs the involvement of the folder’s name. But it is necessary for the explanation of this current concept of escaping the quotes from the string. The first step is to enlist all the folders and files of your system, and this can be done by using the respective command.

You will see all folders and files name hereafter this it’s time to introduce the values of a string to the variable. One thing that should be noted here is that we will use an asterisk at the start of the string; this will show you the unquoted string along with all file names and folders. This method is not similar to those examples that are defined earlier. If you use an asterisk at the end, then this will show all the file names at the end of the string in the result. 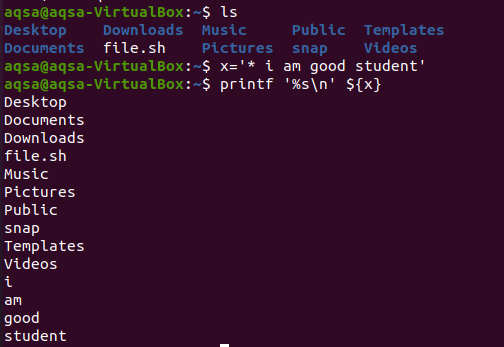 The output shows that the single quotes are also removed by using the above-mentioned example. We can also remove the asterisk sign from the string, but it is the same method as described earlier in the article.

This example is related to the concatenation method of combining two strings just to remove the single quotes from both of them. One string is defined here, whereas the other one is a constant.

Now take print of this variable along with the constant value.

From the output, you can see that both strings are written together without single quotes.

I hope this guide will be favorable for you regarding the usage of escape characters, the single and double quotes according to your requirements in handling bash properties.